Is this Fire Blight? Please help me diagnose

This is my 4-n-1 pear tree. I purchased from a big store and planted in June. I am in Southern California. All my new growth starts off beautiful and then ends up with black sections on its edges. If it is fire blight, should I just pull the tree out and start over? I hate the idea but not sure what to do. (Sucks I can only do 1 photo) 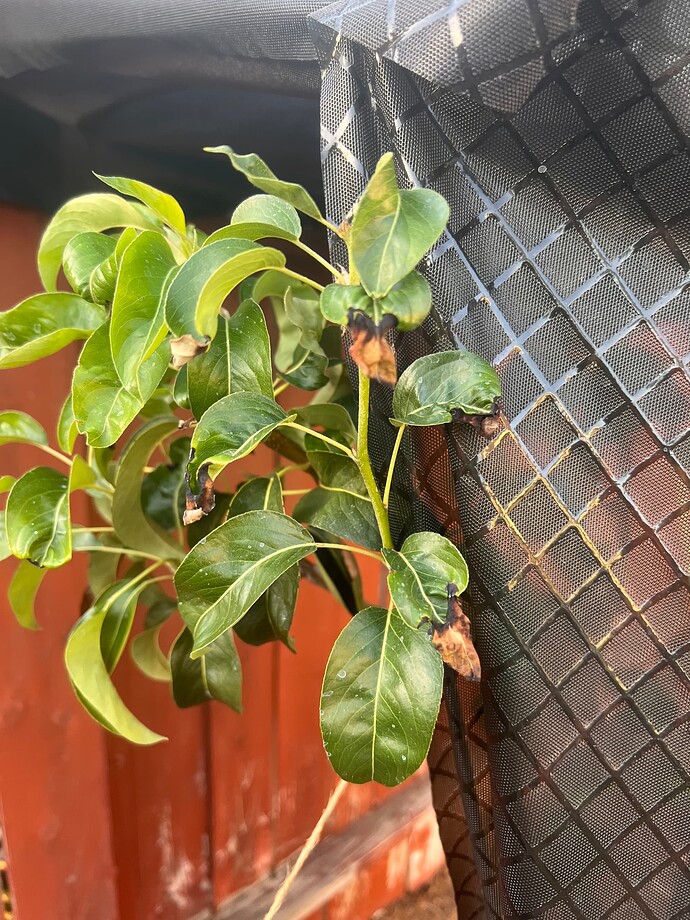 That gives me some hope.

Here is another pic of my Pear Tree… 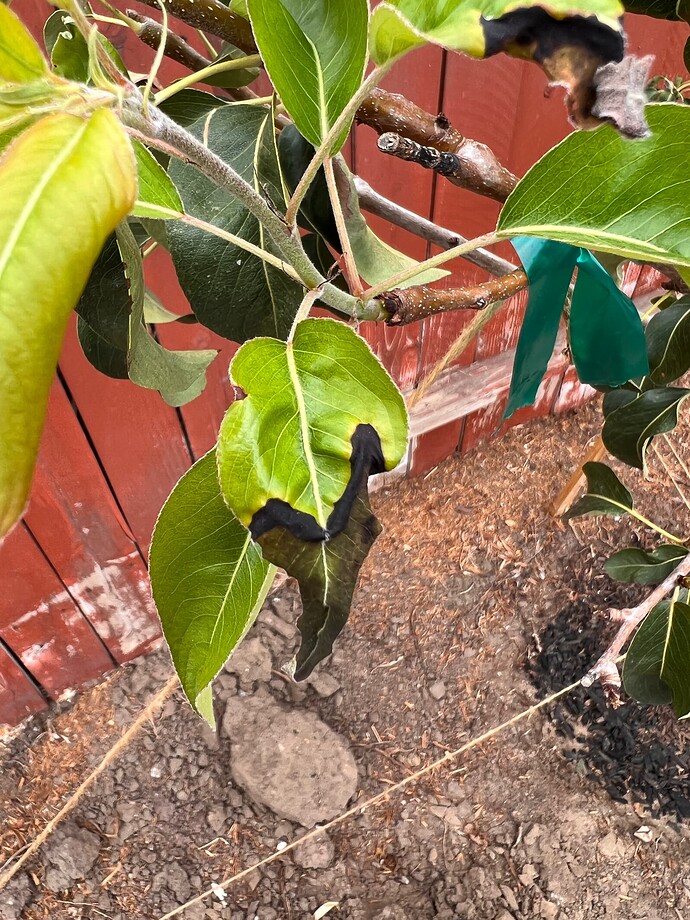 Thank you. Any idea what It could be? Should I just keep watering and moving along?

It looks exactly like the fireblight symptoms we see in southern California. I’m going to guess there are some ornamental flowering pears planted as street trees nearby.

Are you a Django Reinhardt fan?

@Richard Darn… It’s a new tree. I can’t really cut back the 6-8” suggested because that would be most the grafted branch. Should I start over or will it have a chance to survive? What I’ve read is it will eventually die. I’m not sure about other trees. There is an old/small avocado tree on the property that I’m afraid might have FB as well, which could be the source.

Here is the avocado tree 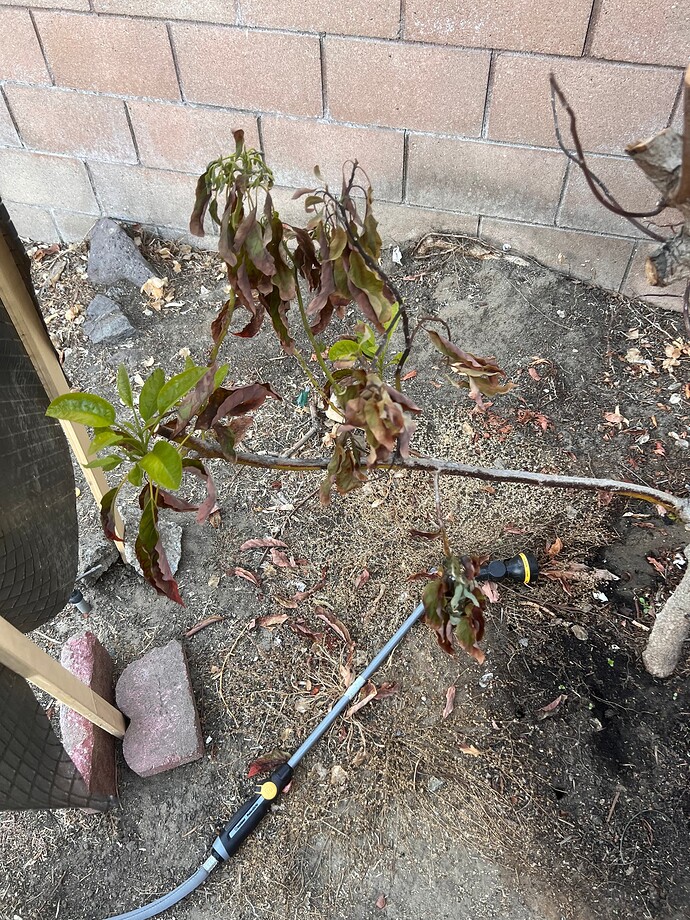 I’m actually a fan of the spaghetti westerns with Franco Nero and others who played Django. But knowing that name did introduce me to Reinhardt.

I can’t really cut back the 6-8” suggested

That myth won’t help. But AgriMycin will help if the tree is partially resistant. Which pear cultivars are on that 4-in-1?

Here is the avocado tree

Avocados are not a host for fireblight. Wrong family of plants. Given the current weather I’d say heat stroke. BTW, Avocados need a luxurious planting hole with ample drainage.

Against that wall things must dry out extremely rapidly and that could cause serious die back if you ever let the soil dry out.

The pear photo does not look like FB to me. Does it continue to progress into the leaf stem then branch? If not I’d say no FB. Do you see tiny droplets of golden fb ooze? Well maybe the ooze wouldn’t happen under those dry conditions. Nevertheless, if it just that the leaf tips turn black, dry out, and fall off, I wouldn’t sweat it if the tree looks good otherwise.

It resembles a nutrient deficiency, see the San Jose pic of iron deficiency when you search for nutrient deficiency of pear leaves!
You might want to try some ironite and perhaps some foliar sprays. It’s early in growing season, so you may want to pull off the defective leaves to see if healthy ones can recover after treatment. Don’t give up yet
Dennis
Kent, wa

I had a 4 in 1 pear tree with fire blight and eventually lost one of the grafts. My experience with fireblight is that it shows first in the stems of the leaves and the branches. Sometimes it has not even spread to the leaves yet when I see it creeping up the stem as it darkens. It moves from the branch into the stem attached side of the leaf and eventually to the whole leaf. It spreads from that outer leaf down the branch to the next one. As had been said, it is often accompanied by an oozy liquid. That does not look like fireblight to me. I’ll try and post a pic of my pear tree.

I have had bad scab that started on the outer unattached side of leaves, spread across the leaf to the middle and then the leaf breaks in half. All the while the end where the leaf is attached to the branch stays clear. That’s a possibility. It looks more like a fungal infection to me. Pluck off the affected leaves. 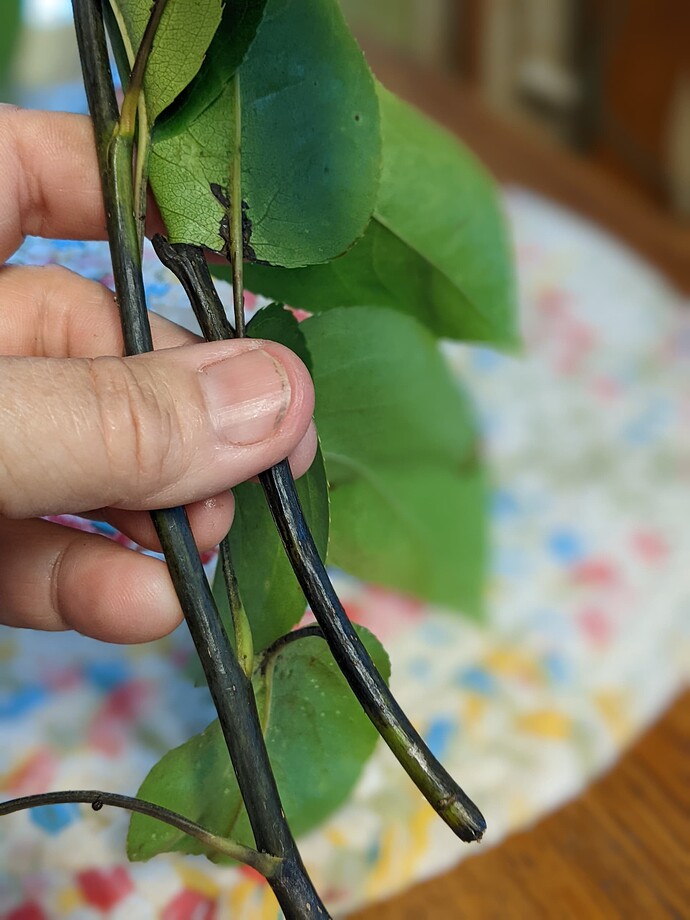 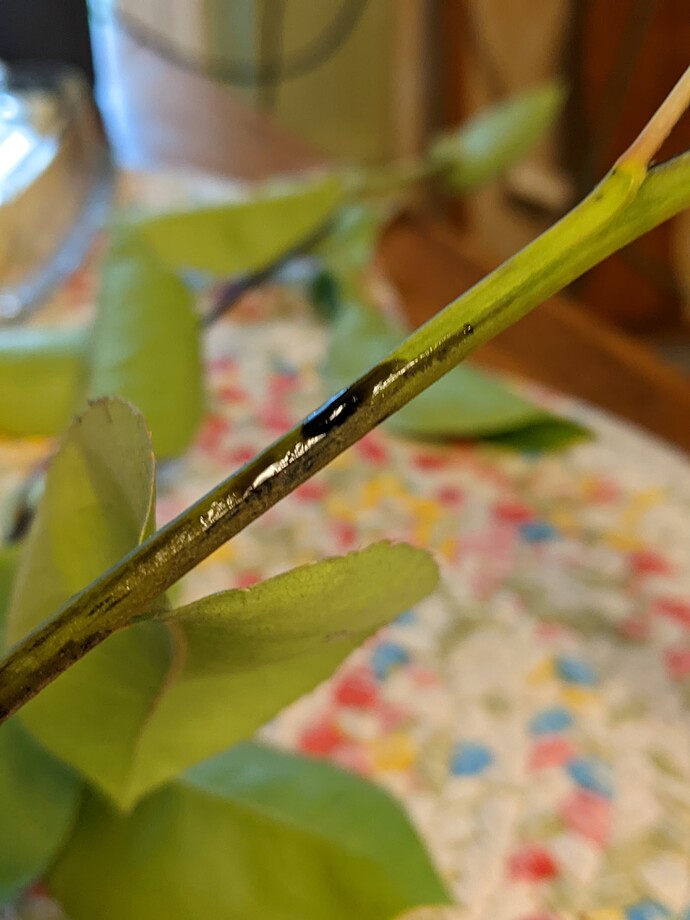 These are my pear leaves where I lost the shinseiki graft. I kept cutting off that part and eventually lost the whole section. Now it’s a 3 in 1. The good part is that now that I have joined the forum, I can graft my own pear tree. I don’t need to buy that expensive tree from stark where I got it.

Welcome to the forum! Sorry your issues brought you here, but you are in good company. We are all dealing with similar woes. This group has vast knowledge that will get you up and running in no time.

When in doubt pluck off the suspicious leaves no branches are impacted yet. Why wait around to find out. When in doubt amputate but in this case just the leaves.

Historically Ironite contained a significant amount of iron but nowadays the concentration is low and not in a readily available form.

When in doubt amputate but in this case just the leave

This myth was debunked by researchers at UC Davis decades ago.

My experience with fireblight is that it shows first in the stems of the leaves and the branches.

You are not in southern CA.

Would you recommend a Moss out liquid iron foliar spray Richard?

@DennisD
Moss Out! is designed to kill moss in lawns. The active ingredient is Iron sulfate. I don’t recommend it as a foliar spray for fruit trees. If I believed a foliar iron supplement was needed I’d use a water-soluble EDDHA product.

I’m interested in the difference that the location makes. How does it typically show in southern CA?

I’m interested in the difference that the location makes.

Our climates are very different. Further, there are a number of Rosaceae hosts here traditionally planted as ornamental plants. On fruiting Pears, fireblight will first exhibit exactly as pictured in the original post, then progress backwards to the leaf node. In some cultivars e.g. Flordahome this happens quickly and by October any newer growth on the plant appears to have been fried by a propane torch. On others it will advance slower, and on a few resistant cultivars there will be only scattered evidence on a few leaves - rarely progressing to leaf stem nodes.

This myth was debunked by researchers at UC Davis decades ago.

What myth? Link please? No hit and run- it doesn’t help me learn anything because over the years I’ve found not everybody reads the same research the same way. .