It deserved the hype!

As a kind of comparison thread to the “I never tasted a good ______” thread, I thought this might be a good topic.

I’ll lead with my morus nigra. It grows slow, isn’t all that happy in the pot, and has gotten frost damage even when in my garage …

but damn if the fruit isn’t some of the best I’ve ever tasted. Right now it may well be the only plant I’m considering as as addition to my potted collection.

What have you bought that lived up to the praise?

Absolutely nothing has lived up to being praised. Collards seem to always be productive as well as my peppers.

Before my time as an out of control fig grower, there was a lot of hype about a fig variety named Italian 258 (I-258). It commanded some very high prices for a while. It’s a great fig. Wonderful flavor and texture. Totally deserves the love and attention that characterizes hype. 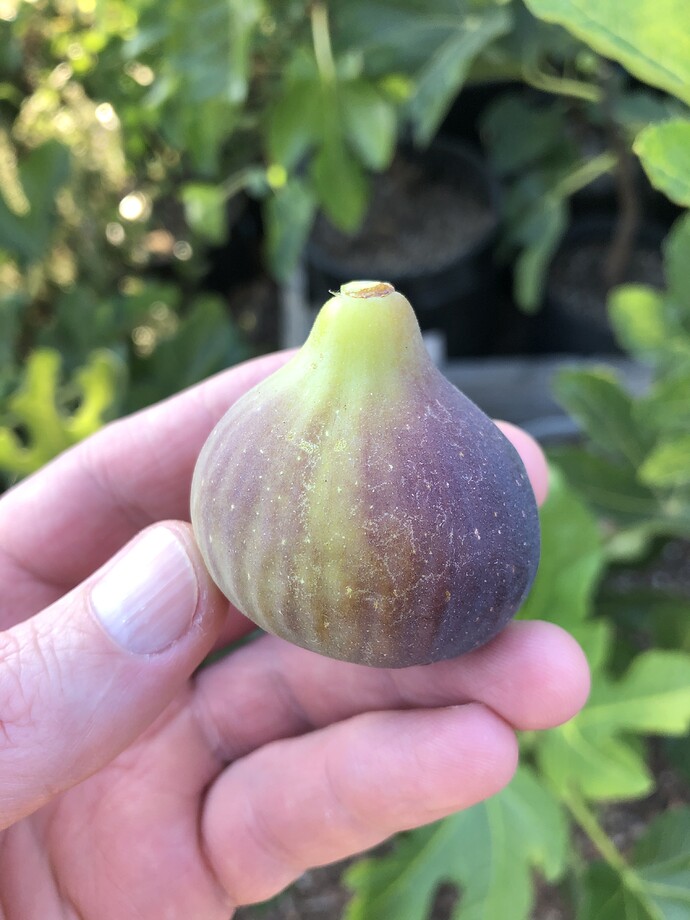 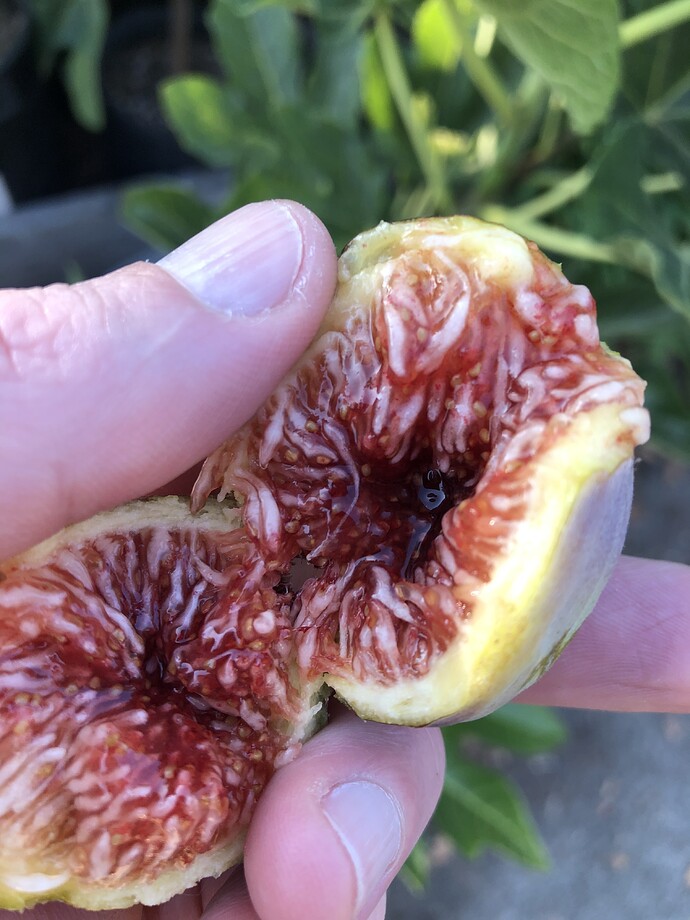 Comice, Warren and Magness pears. While mine have still yet to produce I was looking at buying pear trees last fall and the Warren, Comice and Magness pears were named as one of the best pears for the backyard gardener and was said to have amazing taste. I bought the pears as actual fruit to sample the fruit before buying the trees. When I tried all these pear varieties they made the standard store bought pears like Bartlett and Anjou taste horrible. The Comice, Warren and Magness taste like you are biting into brown sugar but in the form of a pear. Only downsides of the pear varieties is Comice is not too disease resistant, Warren can take forever to grow and pear fruit and Magness does not pollinate other pears and will only take in pollen. If you are looking into buying a few pears trees and are not in a fire blight prone area I highly recommend the Comice, if you can plant more than one tree I cannot recommend the Magness enough as it is fireblight resistant and amazing taste and I can’t recommend the Warren enough in general. I have two Warren because they are that good.

Sounds like I have more additions to my Franken Bartlett to make next year!

I have several Comice trees and I have not seen any problems yet. I’m also at the fire blight capitol, the east coast.
Comice is by far the best pear and it’s Hype is true. IMO

I’ll lead with my morus nigra. It grows slow, isn’t all that happy in the pot, and has gotten frost damage even when in my garage … but damn if the fruit isn’t some of the best I’ve ever tasted.

I’ll second this. Most people in the US don’t realize how good black mulberries can be. They travel badly so they are almost never in stores, they only grow in warmer regions, and have a very short shelf life, but they really are one of the best berries that exists. I’m not sure I’ll go as far as growing one in a pot, but if you are somewhere you can grow one outside you really should. Make sure you get the real thing, though. Many things sold as cold hardy black mulberries aren’t Morus nigra. Morus rubra (red mulberry but the berry looks black) can be perfectly tasty, but just isn’t in the same league.

For me in chilly Vermont, I’m going to claim that haskap/honeyberry have lived up their hype. It’s a very small hype, and the vast majority of people in the real world have never heard of them, but I planted a bunch without having tasted them and they’ve met my high expectations. They grow well here, they produce heavily, they are relatively pest-free, and they can be really tasty. There’s some tricks about them (newer varieties are generally better, you need to net them for a couple weeks after they turn blue, they are often better cooked than raw) but they are a really good fruit for colder climates.

Good to hear these live up to the hype. I have a huge old pear tree that came with my property. This spring I grafted on Magness and Warren to some of the lower branches and most took. Hoping the fact that it’s a mature tree accelerates fruiting.

Triple crown blackberries are delicious, large, incredibly productive, can be grown in full or part-sun, and are easy to propagate. Carolina Red Raspberries are similar in all of these positive characteristics. The kaleidescope grex perennial kale from Chris homanics breeding efforts, crambe Maritima/sea kale, and old king Henry are also awesome but are less exciting than fruit

I have way too many other things that are too early to evaluate but these are early and easy winners.

I’d love to get some morus nigra that I was confident was actually morus nigra. Any luck with propagation?

Not necessarily a fruit variety like the other posts, but rather a way of preparing them. Hoshigaki is absolutely worth all the hype, praise, effort, and time IMO.

I have never had hoshigaki until I made some with hachiya persimmons from WF. I only made a few because I wasn’t sure if I would enjoy the outcome or not and they are a tad expensive but man the flavor/texture of the finished product was absolutely incredible.

I have three fruits that were not really hyped at all that are just major producers of good fruit for me.

My Loganberry… it just produces so many nice large berries… very tart and flavorful, not very sweet, but excellent processed into Jam, or mixed with other sweeter berries for fresh eating.

Heritage Red raspberries – they are not really hyped at all either, but make loads of really good raspberries for me and are so easy to propagate, spread like crazy… You can go from 6 to 60 in just a few years easily.

Eh raspberries are super hyped where I live because they more often than not just live. The Floricane varieties tend to get tip dieback where I live but the primocane raspberries spread, are tasty and like I mentioned kind of just grow. When I was getting plants a few years back that I thought of that can produce a lot raspberries were on my list. Raspberries grow so well raspberries are one of those plants you have to sign a propagation waiver if you are buying a certain amount. More often than not the waiver is at something like 1000 plants but they still grow to the point people worry about others propagating them for sale unlicensed.

Wow lots of good info. My winners are Himbo Top raspberry out produces all others even Prelude. Mild flavor not too tart most years. New berry blackberry and also marionberry. Western trailing blackberries are the morus nigra of blackberries. I grow a nigra too in a pot.
Flavor King pluot. Dapple Dandy is big productive and is excellent most years.
White D pineberry. Productive, large, and extremely fragrant and super easy to grow. Archer is looking great too big, fragrant and very tasty. Aurora honey berry. Very unique flavor. Legacy blueberry productive, tough, excellent flavor. Raz the same. Cara’s Choice has the most complex flavor but isn’t very productive. Tayberry is an amazing blackberry/raspberry hybrid. I could go on and on…

I had my first one last year I must say it was excellent. I got about 30 of them this year. It is pretty much a full scaffold now. Thirty or forty of each stone fruit is perfect for me. Much more and I will need to dry or freeze or giveaway.
It’s been another good year here I want to add a honey series and I will be all set with nectarines. I keep running into bad luck with that series.
I have an Indian Free seedling with three fruit on it it’s third year. Curious,a natural cross, I do want to cross with Arctic Glo one day.

Just want to say I have a grafted Illinois Everbearing up here in 4b Canada (USDA 3b) that usually only gets a bit of dieback but past winter we hit -35C (-31F) and I saw more dieback of last years growth while older branches and closer to the trunk were fine. Produces a good crop yearly so if it can grow here you should be able to grow it in most areas of the USA if you can find a cold tolerant rootstock for it. Mine is from a seedling mulberry from the Montreal area.

Great to hear you have a well established scaffold! Good job… Arctic Jay, Arctic Star and Arctic Glo are three fantastic white nectarines, love them all…

@Ahmad How has Blenheim done for you? Mine took forever to get started and has been pretty stingy.

Blenheim was doing great for me. Very productive (I think it is self pollinating) , very tasty and minimal canker. If it rains during bloom, a fungicide spray is recommended to guard against blossom rot which is a very aggressive disease causing loss of not only blossoms and fruitlets, but also branches!