The pawpaw’s are ripening in Tennessee. My patch has plenty of trees but few fruit. We have had a lot of rain in August and the fruits are big. 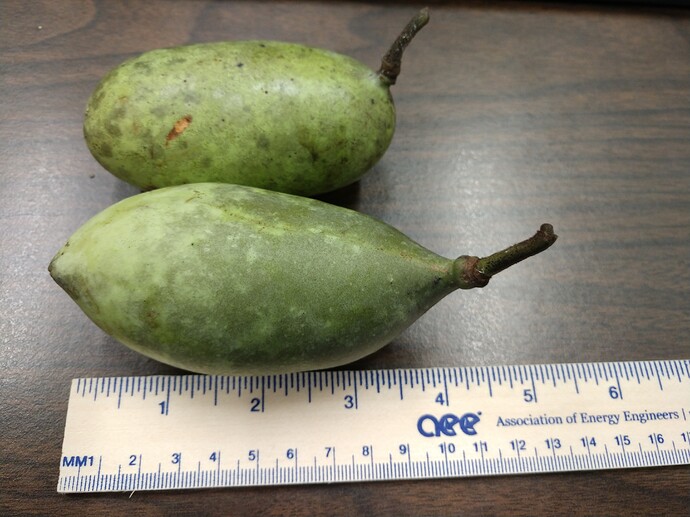 I’ve not got any fruits on mine this year…but have been hearing that they are ripening.

Yep. I’ve gathered about 2 dozen from beneath one of the trees next to the driveway; another tree has a similar number hanging, but they’re still hard and green…first one dropped today. Have pulped out and frozen 2 cups of pulp, but have given most of them to the neighbor across the street, who loves them… she’ll return the seeds. These are from seedlings of named varieties(IXL, Davis, Prolific, Lynn’s Favorite, etc.), with some named varieties, like Overleese, Mango, PA Golden, etc. grafted in.
I can eat one pawpaw, and that’s enough to do me until next year…

Been picking - and picking up - a few ripe persimmons for the last week or so. Mainly SFES, a local 60-chromosome selection, and John Rick, but Yates, Prok and others are not far behind.

I’m completely done in my pawpaw orchard. Started about August 4 and last fruit dropped August 29. Seedlings and grafted trees.
I didn’t expect it to be so early and so brief!

That’s so weird, mine are just getting started.

Where are you located and are the trees in full sun? Sun and of course latitude both make a lot of difference.

I have six growing on my Sunflower tree and one growing on my Prolific tree. This is my first year for pawpaw fruiting. Does anyone know if the seeds, if germinated, would eventually produce a tree of the same variety, or more likely produce the variety of the rootstock that each tree was grafted to?
Dennis
Kent, wa

Probably a combination of the two parent trees.The one with the flowers,receiving the pollen and the variety from where that came from.
Sunflower is talked about,as being self fruitful,so that could be the same.

As Brady said, it should be similar to the parents but won’t be an exact clone. Make sure you keep the seeds moist, you’ll want to cold stratify them for at least 3 months before planting them. I think lots of people put them in damp coconut coir. If you have very deep pots (14"+) or even a 5 gallon bucket with holes for drainage, either would work for seedlings as they grow very deep roots the first couple of years. Congratulations on the first year of fruit!

Anybody have an idea when they might ripen in southern Ontario?
This is also the first time mine have set fruit and they are rare enough around here that I’ve never seen a fruit in person before.

IDK Canadian geography, but…
NC-1 pawpaw was one of Doug Campbell’s selections, originating at Niagara-on-the-Lake, Ontario.

Going from memory I believe many varieties reportedly ripen in October in Michigan, so that might give you an idea.

It wouldn’t have any relation to the rootstock, but as others have said it would be a mix of the parent cultivars (Sunflower and Prolific), genetically, and the flavor, size, etc could be anything. Though decent chance it will be similar to the parents.
Though as noted the fruits on the Sunflower could be self-pollinated and thus not a cross with Prolific (even the Prolific could be selfs too, according to recent research on pawpaw selfing)

No, seeds may resemble but don’t produce same as the parent tree.
Rootstock should have nothing to do in the outcome.
I keep seeds in freezer bags in the refrigerator and have a damp tissue in the baggie – similar to storing scions of fruiting trees. I get from 60 to near 100% germination…planting outdoors in pots May-July. It can sometimes take them a second year to germinate…especially if planted directly into the earth.

I didn’t get a very good fruit set this year, but one Kentucky Champion seedling made some huge pawpaws. 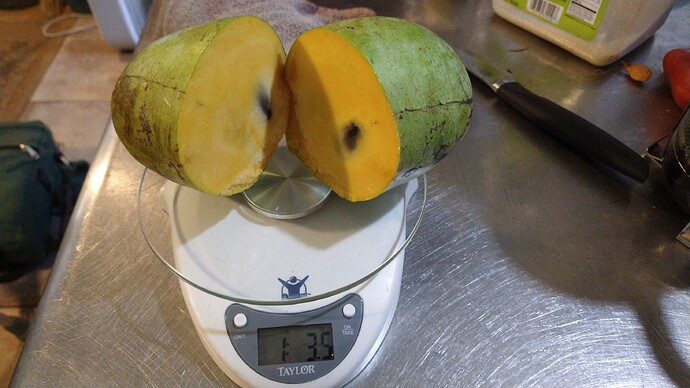 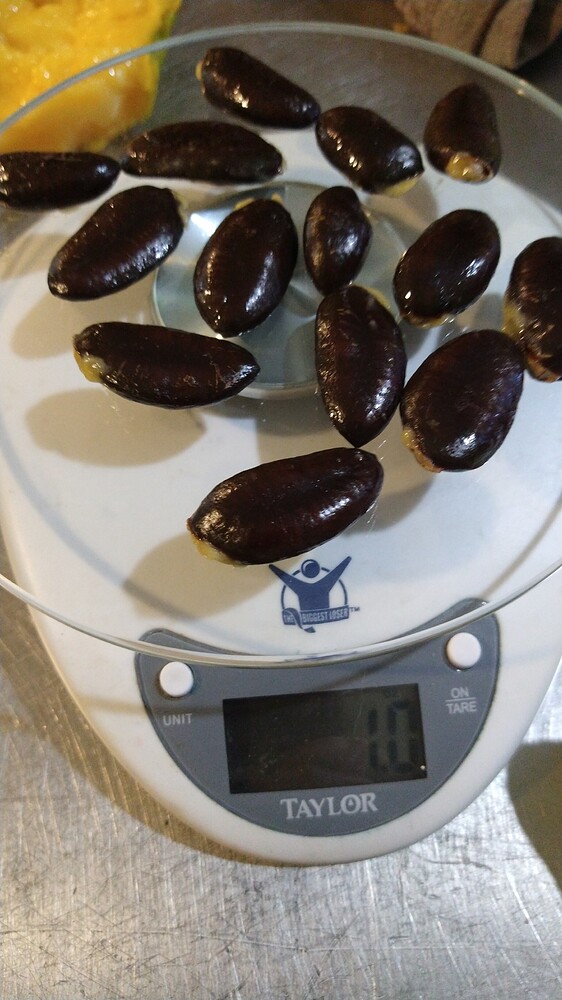 The sad news is all of them have vascular decline. Whatever causes it must be endemic, because there are no wild pawpaws locally, and all of my trees are seedlings. The tree with the worst symptoms was planted almost on top of where an old crabapple died, possibly from armillaria.

Triloba,
I live in Nashville, my patch is in Old Hickory. It’s in a shady ravine.

Thanks guys for the seed growing tips, as a new grower I really appreciate your experience sharing!
Dennis

I’ve had a good season so far. Most of the larger fruit have fallen but there are still a few hold outs. 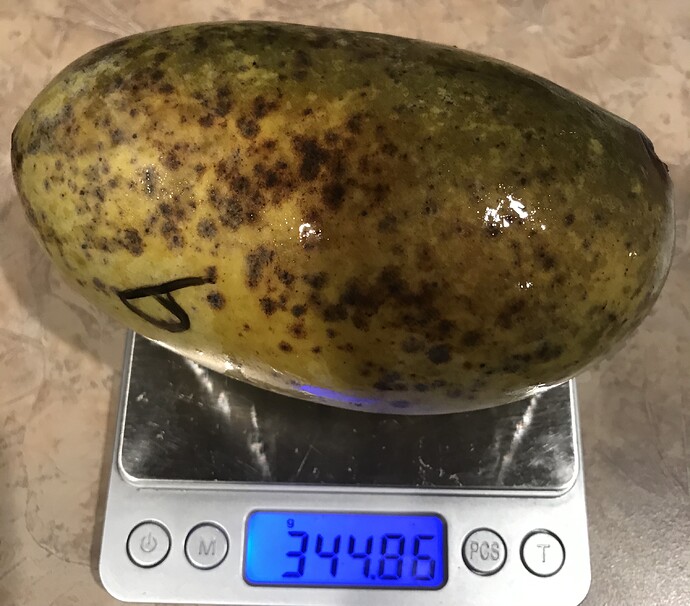 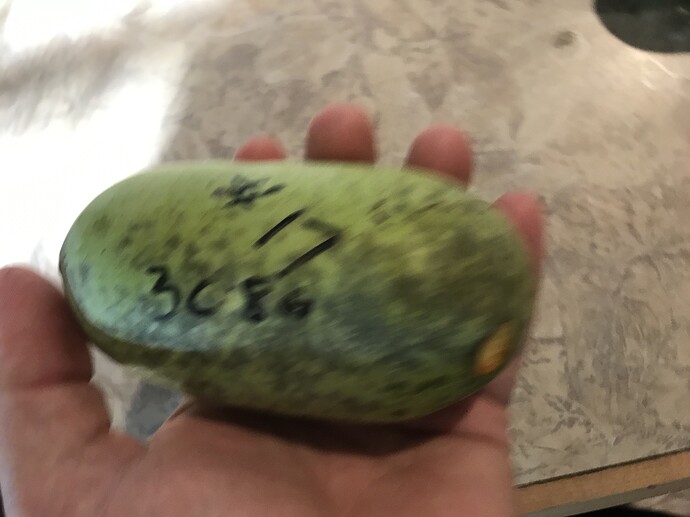 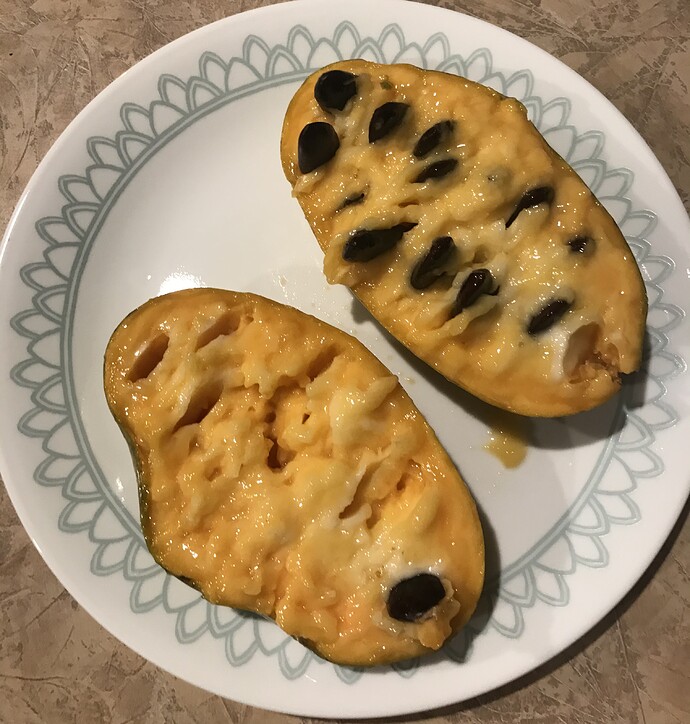 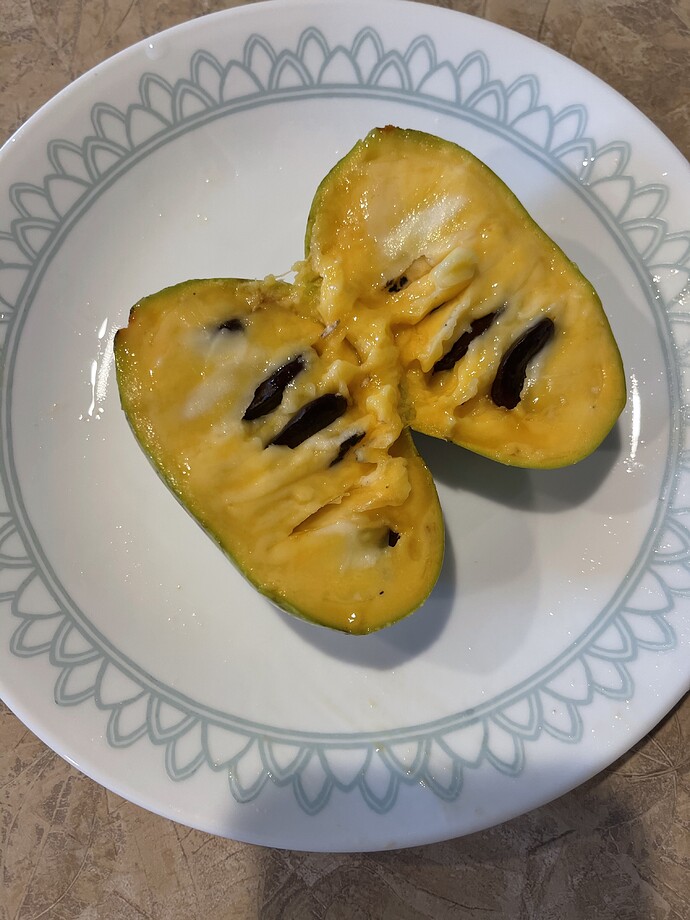