Just came across this video of growing persimmons in Japan. A lot to unpack, more showing than telling. And this farm apparently power washes the old bark off every spring? 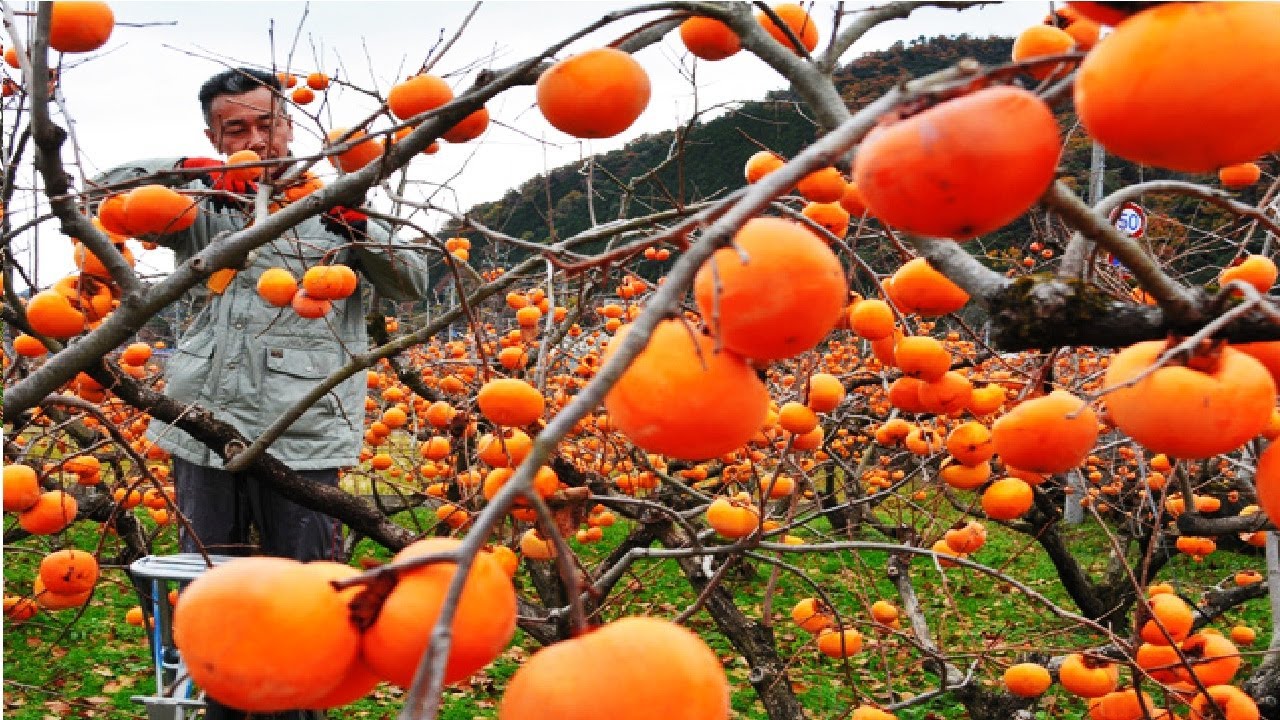 @tonyOmahaz5 you need one of the peeling machines they show at 11:27!

Could someone explain the pruning method they’re using in video? I thought persimmons were carefree and needed no pruning.

Can you be more specific as to which part of the pruning that you find confusing?

The video shows a commercial orchard, so it is done much more intensively than the home gardener need worry about–but many parts: removing dead growth, the crowded and crisscrossing growth, and excess fruit is removed to promote larger, marketable fruit–is standard practice, and is usually done for most managed fruiting trees. The pressurized spraying to remove older bark is interesting and new to me.

My most important “learning” is the extent of summer pruning and thinning. The number of fruiting branches is controlled by severe trimming of new shoots; and the number of fruits is further limited by severe thinning of developing fruits. I haven’t tried anything similar on may own trees, which started fruiting only 2 years ago. But I will.

Yeah, I’m thinking about applying these principles to my Prok tree when it gets started. Might be overkill, but I bet that’s how you can get the claimed 3" size fruits. I’ll definitely apply it to JT-02 and Chinebuli.

With that fruit size, your squirrels won’t miss them

Sometimes growers leave more fruit on the trees in hope that those tree-rats would not take them all.

I think if they’re going to get any, they’ll get them all either way. So may as well feed them the best!

I do plan to pick at least some while still hard and counter ripen them, experiment with various methods of removing astringency, etc. And Chinebuli will be potted, so it should be more defensible.

I draw the line at powerwashing off the bark, though!

Overkill, you know they tend to do that with everything! They feel that they should be the extreme masters world wide.
If they sell a persimmon for $50.00, have plenty of takers why not go the extra mile.
I should tell them in 2019, I could,t get rid of bucket loads, end up in the trash, being rotten. 2020 persimmon production were only about 40%, no problem that year. This year close to zero, only 2 tree’s, maybe?
Back in the seventies when I was in apple’s/pears/ stone fruits, Washington State produces the best tasting fruits, most of the top unblemished fruits went to Japan, $5.00 a piece.No sh…!

western washington becuase im on seattle side and growing apples, peaches, nectarines, apricots, cherry have been difficult. its there less rainy and warmer summers that is the key to better fruit harvest.

Less is less, more is more.
Less is bad, more is better, and twice as much is pretty good, too.
Too much is never enough, except when it’s just about right.

Well, that’s a puzzle I am never been able to solve. What happens when you grow too many tomatoes?
I don’t sell anything, never did. Have neighbors that don’t care about local stuff, they shop in welllit places with high prices, they feel better, they figure good looking fruits are clean, don’t have pesticides in them.

Just wondered if anyone has “ successfully made” the
Hoshigaki (Japanese Dried Persimmons) in the humid East.
With SWD around.
My kakis are not yet productive,but the fruit flys are thick in the late fall.i wonder if this would work with the humidity and flys ?
Any reports, good or bad ?

I wonder the same. I’ve read of people doing that indoors. Not sure if it will work correctly. I aim to find out if I can do that once I have some persimmons to work with. Japan is fairly humid, so I suspect it’s possible.

I don’t know much, but I have a Korean friend that lived in Greensboro, NC for a while and air dried persimmons there, hanging them from the lamp on their townhouse, and I know they turned out great. So far as I know, parts of Korea and China where persimmons are grown have fairly similar humid climates to the eastern US.

I’ve also dried whole kaki persimmons in my dehydrator at a very low temperature, and I’ve been very pleased with how those turned out.

Geezzzz, what does a fruit fly looks like? Got a army of Boston Orioles visiting, maybe they go after fruit flies.

What about spotted wing fruit flys “SWD. “
Seems they would just love a peeled persimmon?
Swarms of them here in the fall

I think @PharmerDrewee has done it successfully. I did a few. It worked out fine. I hung mine in my laundry room.

I did it with Hachiya. I think astringent Asian persimmons are commonly used. I don’t think you could do it with American persimmons.

I did it outside in November, but had success inside too. The frosts killed off most bugs by then. You have to keep them somewhere with good airflow or they’ll get moldy.

I’m also assuming they have native SWD predators in Japan to keep them under control. Heard there are some going to be introduced or already introduced to help with our problem.

Ok , after frost , that makes sense,
Thanks