Jujube recomendation wanted for zone 8 or 9a

We have very few jujube varieties available here. The trees are expensive, so I will only be able to get one.

Si-Hong
Produces large, round to barrel shaped fruit of very good quality. Sihong’s sweetness makes it great for fresh eating or dehydrating. Unlike other jujubes, when dried, Sihong has fine wrinkles on its skin surface. Very reliable bearing

Chico
Fruit is round but flattened on the bottom and look similar to a small apple. Pick when the whole fruit (or at least 80%) has just turned brownish red. Texture is crisp and light we consider it an excellent fresh or dried variety. Fruit size 35-45mm. Developed at the Chico institute in California, this is an early fruiting variety.

Sherwood
The Sherwood jujube is considered to be one of the largest and best flavored jujubes, with fruit growing the size of lemons. The Sherwood is a thornless jujube tree producing very dense growth with a columnar, upright tree shape. Late season variety.

Li
Large and round in shape. The texture is crisp and fresh fruit have an excellent flavour. Fruit can be picked at the yellow/green stage however the best flavour is obtained when half the fruit has turned reddish brown. Mature fruits are 40-60mm in diameter. Mid season ripening.

I would order the real sweet, crunchy, more juice Honey Jar jujube first from Burntridge nursery and graft other jujubes varieties onto it later. This will help with cross pollination and different varieties to eat and spread out the harvest season.

Where are you located?

I am in Australia, which is why we have so few varieties. I am a little jealous of the varieties that you seem to be able to grow.

The place that sells the above four varieties also sells ‘thornless’ and an unnamed one with smaller fruit. I think I have already ruled out those two jujube (Search DaleysFruit.com.au)

I also wanted advice on the above four, as I would only have one tree, and nobody nearby has a tree, it would need to self pollinate and still produce a reasonable yield.

I tried a friend’s Li and was not impressed. Tasted spongy. Not sweet at all like my Honey Jar and Sugarcane. I let a few wrinkle up and they weren’t much better.

All 4 are excellent jujus. We favor sihong the most, but taste is an individual thing. Li is actually excellent, but only when fruits don’t get scalded by torrid summers. Chico and sherwood are also excellent. Sihong also has the advantage of having stiff wood, so will do good as interstem, since
you could graft it over with more droopy varieties at 5- 6 feet level. Good luck!

FWIW, Sherwood does well in some parts of the USA, not well in others. If a vote were taken on the board honey jar would win. I didn’t like li the first couple years but it seems to get better every year, I really like it now. The other varieties you list all do well for me.

Sherwood has a reputation of not bearing fruit for several years. I cannot speak first hand but it would be a consideration for me if I could only start with one tree. I have Chico and Li and I prefer Chico over Li. Chico is a sweet/tart flavor and Li is more just sweet. My Li is sometimes really good but not always. I have tasted Sihong and it is very good.

In regards to fertility I can’t speak but I will say that Li is self fertile and I would think Chico may be (empty pits…no seeds produced).

I’ve read that there is a lot of commercial growing of jujubes in Australia.

I’m not 100% sure, but I think Sherwood is only partially self-fertile while the other three on your list are reliably self fertile. Of those three, Sihong and Li have a mostly sweet taste while Chico has a bit of tartness. It’s extremely difficult to recommend just one variety because they are all good! But personally, if I had to choose one from that list, I’d choose Sihong.

It’s extremely difficult to recommend just one variety because they are all good!

totally agree!
admittedly, we used to dissuade people from obtaining cultivars which we didn’t particularly like, but recently more open-minded about it, as the quality of many jujus vary with location they are grown, and even if grown same location, will vary with the time of year they were harvested. Here in vegas, li and other varieties ripened june-aug are huge, but dry and coarse. Those harvested oct-nov are radically better.

My SiHong is new this year and has a half dozen fruit on the second bloom so I’m glad to taste my own. As much as I love my Honey Jar and Chico (for their different tastes) I would probably go with Sihong if I could only have one. That was the one I was chasing and couldn’t find before I got either of the others.

here, sihong on 2nd bloom would be so much better quality. Those ripened at the height of summer are better eaten as dates than as fresh fruits. Over the years, sihong was that cultivar which did not get much attention, and i partly blame the more catchy-named cultivars as honey jar, winter delight, and sugarcane, etc. hogging the limelight
incidentally @k8tpayaso, would love to see photos of your sihong tree. Was that the cultivar you drove hundreds of miles for?

Was that the cultivar you drove hundreds of miles for?

That was the cultivar I drove hundreds of miles to get and they were mistaken and didn’t have it… so I got a Chico instead.

OMG… you’ve caught me out, Raf, it seems I haven’t taken a picture of it in over a month!!!

This was early August when it was blooming. Lots of fruitlets but all dropped except 5-6. I will be glad to get the 5-6!! 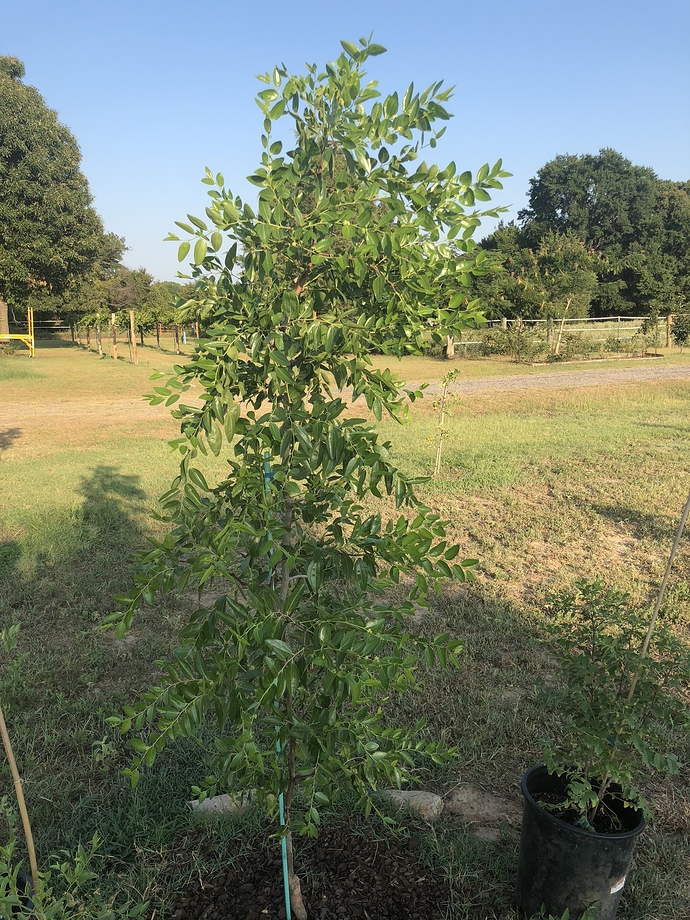 nice tree, and hoping the 5-6 fruits reach the finish line!