My last batch. After 3 days of rain and damp weather, 99.9% of fruit cracked and many got moldy on the trees!! About 6-7 lbs of them. Should have picked them last Sun before all this rain. 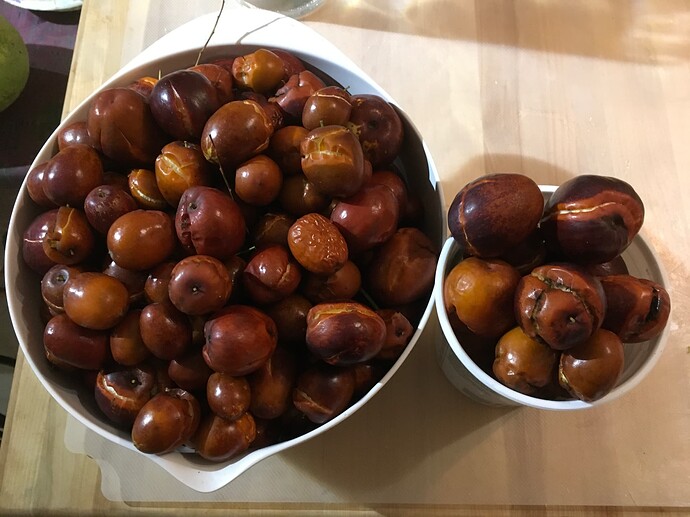 Primarily, Honey Jar and Shanxi Li. Orange Beauty tasted good. Sihong, even with so much rain and moisture, still are dense and on a dry side. Some Shanxi Li were very good. One I had to split it out literally. It was so tasteless making me feel like eating styrofoam.

Any opinion about the following jujubes
Jin
Kima
Qiyue

Jin- I haven’t tried it, but I have heard it is better for drying

Kima- supposed to be very productive, round fruit. Mine is still pretty small and only made 1 fruit this year. Ok, not great.

Here’s one I forgot to post the other day KFC (KongFuCui). The skin looks wrinkled, but that is just how it is with this cultivar- same as smooth shiny for other cultivars. This is a new graft, so I think the fruit would be much earlier normally. Good, but I’ll need more sample to decide if it is just good (like Massandra) or top-tier. 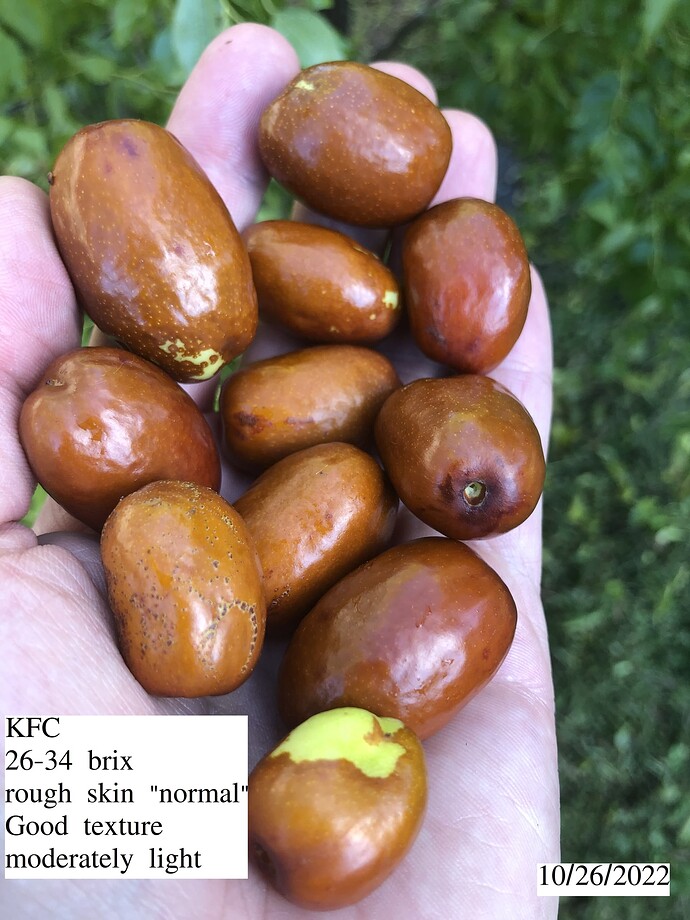 I have Jin. I grafted it over……

The most common Jin (aka Chang) is average or below average. I had a tree for more than 20 years and rarely ate the fruit because it was in the bottom 10% of my trees. Fruit is large.

There is also another lesser known Jin that has much smaller fruit that is grown in Californina. It is better than the big fruited Jin, but not a top tier jujube.

These are the two Jin - 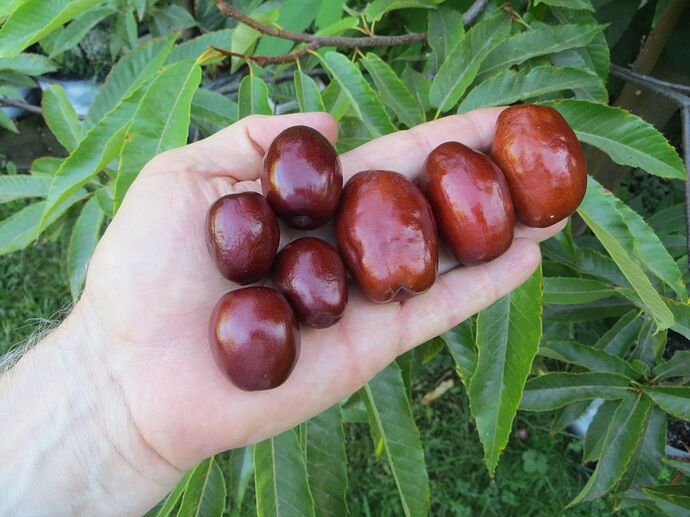 Kima - not much better than Jin. Fruit is small.

Qiyue - As Bob notes, Autumn Beauty.
For me, growing it in California, it was fantastic. One of the best.

I planted a Li twig-looking “tree” that was about 24" about a week or two ago that dropped all its leaves during shipping. The grafted portion went from slightly greenish wood to an amber presumably due to the cold temps, and hopefully not because it died. It hasn’t put out any more leaves, but it’s been 65-35F here mostly, so it might be done leafing out for the year? So, I’m not sure if it’s still alive or not, but I’m wondering if there’s another Li-ish variety that’s somewhat widely available? i.e. self-fertile, good production, crisp, OK size, sweet? Maybe Chico or Shanxi Li?

hopefully not because it died. It hasn’t put out any more leaves, but it’s been 65-35F here mostly

That doesn’t sound too bad. The one time I had jujube trees severely die back was when I planted actively growing trees from Florida, within a day or so of a hard frost. Even so, they came back from the ground (and unusually, they were on their own roots), so it eventually worked out.

so it might be done leafing out for the year?

Very likely. Best to let it sleep for the winter.

I don’t know that there is much inventory right now to be able to select what cultivar you want. Might be best to just plant the biggest tree you can find (likely either a Lang or another Li), then graft over it the variety(s) you actually want.

Many of my trees have been dropping leaves. Here are a few late season Sherwood. OK, but not great fruit. 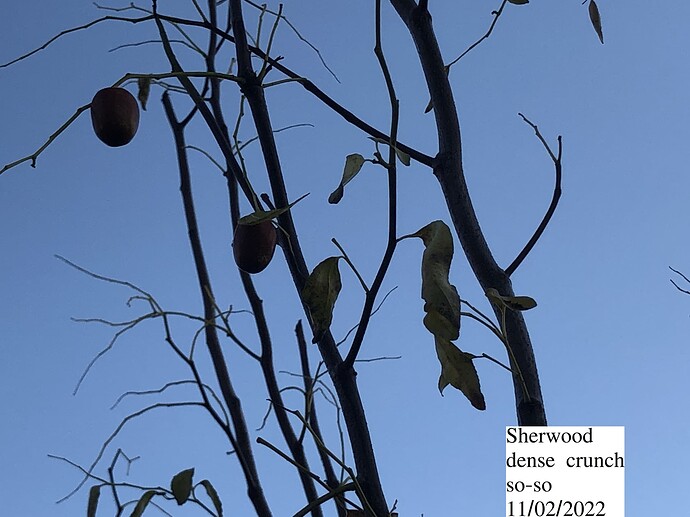 On the same tree, the September Late graft still had some leaves. But the fruit wasn’t much better (maybe slightly, but I’m not a fan). 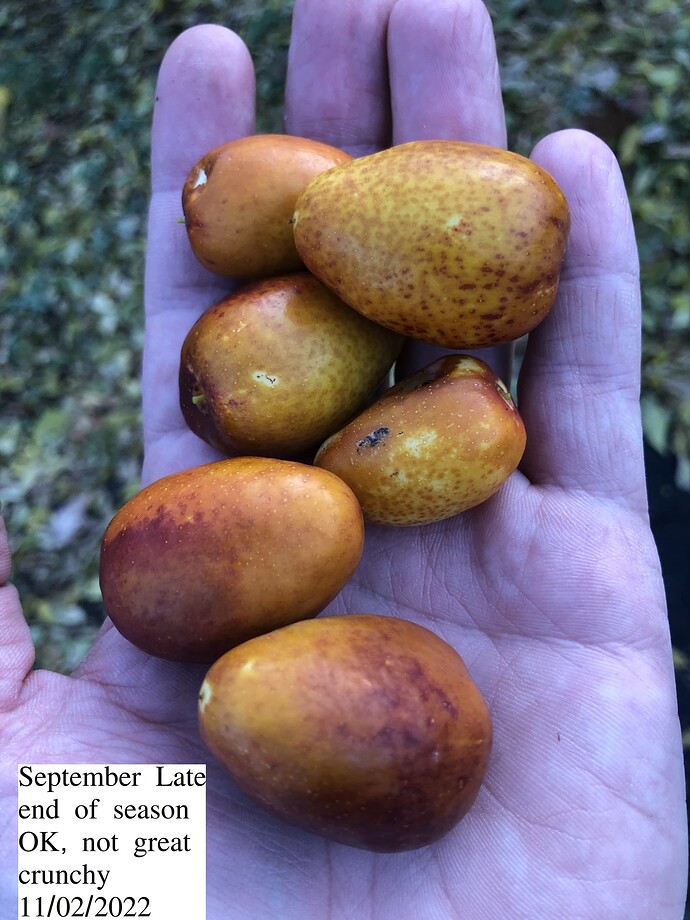 Sandia on the other hand is very good and looks to have ripened for me. At least this graft at a rental did. The original tree didn’t produce any fruit at all (ever, so far). 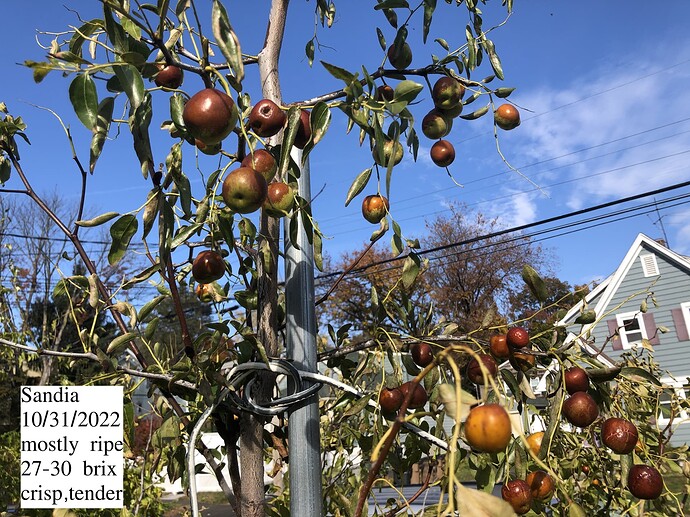 I did some tastings (both myself and a daughter) and we couldn’t distinguish Dong from Sandia. The only difference I can see is that Dong is about a week behind, in terms of coloring up. But, even with 80% green Dong is still quite good and at least 25 brix. Even 100% green isn’t bad eating. Most of the Dong & Sandia samples were in the 27-30 brix range. Both are round and similar to Sugar Cane in size. The strongest descriptor I have for both Sandia and Dong is tender. They are not hard and crunchy like Sherwood or So. I like So a lot more than Sherwood, but they do both share the hard/crunchy trait. So just has more juice and sometimes a nice tart tang.

People in more Northern areas (@mamuang …) may want to consider Sandia as an end-of-the-season option. My kids like it a lot and even if it doesn’t get brown, you can still enjoy the green ones. Though I admit that to me it doesn’t have much of a complex flavor. By this time in the season a 25-30 brix sugar bomb isn’t something I can eat a ton of. Late season Sihong and So are actually more appealing, though from a technical standpoint I recognize that Dong and Sandia are superior (texture/juice).

I just received my order from OGW, 3 jujube trees in 1 gallon container, they are tiny. I never bought any fruit tree this tiny. How long will it take before I can get some decent fruit. I really like my GA-866 tree from Tree of Antiquity, decent size.
This year I might go to my local nursery and pick up some jujube variety that I don’t have, save on shipping cost, plus they usually have decent size.

I only buy the little trees from OGW when no one else has the tree or the wood. If you can find the scionwood elsewhere, it’s usually quicker to buy a large Li tree and topwork it to the cultivar you want.
The small trees you have now may take 2-4 years to really start growing much.

This is my first year of grafting, so I’m not sure how well it will turn out.

I only buy the little trees from OGW when no one else has the tree or the wood. If you can find the scionwood elsewhere, it’s usually quicker to buy a large Li tree and topwork it to the cultivar you want.

Looking to get quince,jujube and harrow delight this coming year

The only way I buy stuff from OGW is if the variety is only sold there (like their new Confetti and Empress Gee). The OGW trees have been in 1 gal pots and about 18" tall, while the GO trees have been in the 5/8" - 3/4" range and ~3’ tall (they’s be much taller, but have to be cut to fit in the box).

I’m putting together my end of the season summary and hope to post it this weekend. Lots of info to collect though…

hope the fruits get better as the graft gets seasoned

yeah, sihong is one of our top favorites. I think we are a bit biased towards dense-fleshed jujus.

Glad to hear from you.

I ate Vegas Booty. It was ok. I sure hope it will get better as the graft gets older.

we have a handful of new varieties from seed that hopefully will perform in your area and which will approximate the qualities of HJ or SC
nowadays when asked for recommendations, we first mention HJ and SC and cultivars with similar qualities as those seem to be the easiest to relate to.

I’m doing some Christmas shopping for family and friends. If you were going to get one cultivar, which one would you pick? Honey Jar?

@Moose,
Where do your family and friends live? If it is zone 4, I don’t know if jujubes will survive there.

I would choose Honey Jar (sweeter) or Sugar Cane (bigger). You know that jujubes need another variety to cross pollinate, right?

Where do your family and friends live? If it is zone 4, I don’t know if jujubes will survive there.

I would choose Honey Jar (sweeter) or Sugar Cane (bigger). You know that jujubes need another variety to cross pollinate, right?

I wish I could grow them in zone 4! I’ve accepted the fact that I can only grow a tiny fraction of the fruits out there, unfortunately.

Dang it! I thought they were self fertile but now I see I read it wrong- partially self fertile…yea looks like I’ll need to get a second variety. Sugar Cane sounds good to me.