My neighbors have resigned to the fact that I am a wacky gardener. I have given them fruit every year. They are happy with high quality free fruit.

I would never live in a place where there is Housing Association. They won’t want me and I don’t want them.

@BobVance,
Even my usually good producer like HJ has not set many (yet). I can’t wait to hear review about those newer (to me) varieties.

For those who are interested, 3 jujube grafts from last year did not wake up this year. It was not the first time, either. I can’t pinpoint the causes or reasons of their demise yet.

We had quite a mild winter so cold damage was unlikely. Those grafts were not tiny scion, either. A couple were positioned well on the tree, too.

Growing jujubes is quite an interesting adventure indeed.

To be fair with a HOA you are just a renter who pays all the landlords bills for them. You do not really own the land, they do.

Richard,
All due respect, living under HOA rules never interests me. I like where I live and most of my neighbors like me

For those who are interested, 3 jujube grafts from last year did not wake up this year. It was not the first time, either. I can’t pinpoint the causes or reasons of their demise yet.

That has happened a lot to me over the years. According to my spreadsheet, I’ve done just under 150 jujube grafts (not counting the debacle where I bought 50 rootstocks and none grew…). It’s hard to follow each graft over the years to see when it dies, but I think that if they were going to fail, they did it in the first winter. Or, they limped along, putting on zero growth, then died in the 2nd. Once they start growing well, I don’t normally see that issue.

Agreed. We’ve also avoided rental properties with HOA or associations, ever since we had to sell our first rental (which we used to live in) when they changed the rules to disallow renting. Much better to avoid having another layer of people which can make problems.

Growing jujubes is quite an interesting adventure indeed.

Working in an area where less is known (or at least that knowledge isn’t commonly available outside of China) adds a bit of Challenge. But, in addition to the satisfaction of solving puzzles, I think the potential rewards of jujube are worth it.

Bob,
You do have a lot of varieties that rival England Nursery. Hopefully, they will be more productive for you. I have ask my husband to order me GA3. Need to remind him again.

I do like jujubes a lot for its taste and texture (of the sweet, crunchy kind) and its easy care. I plan to remove some tradition fruit trees like peaches and plums next spring. I would replace them with jujubes if I could find very sunny spots. That is hard to find in my small yard.

I plan to remove some tradition fruit trees like peaches and plums next spring.

I am already in the process of doing that. Just to many trees to fight brown rot. Also replacing with jujubes and now have li and honey jar. What would you say is the largest size jujube that fruits on the east coast? GA866 is large, but many said it took forever to start fruiting.

I only have a few varieties. @bobvance grows a ton more varieties. Hope he can chime in.

My Shanxi Li has large fruit. It has two strikes against it:

This is exactly 30 days after I noticed my jujube grafts breaking bud. The graft has grown over a foot and is flowering. Also, don’t forgot to remove those grafting rubber bands! This graft was getting girdled. 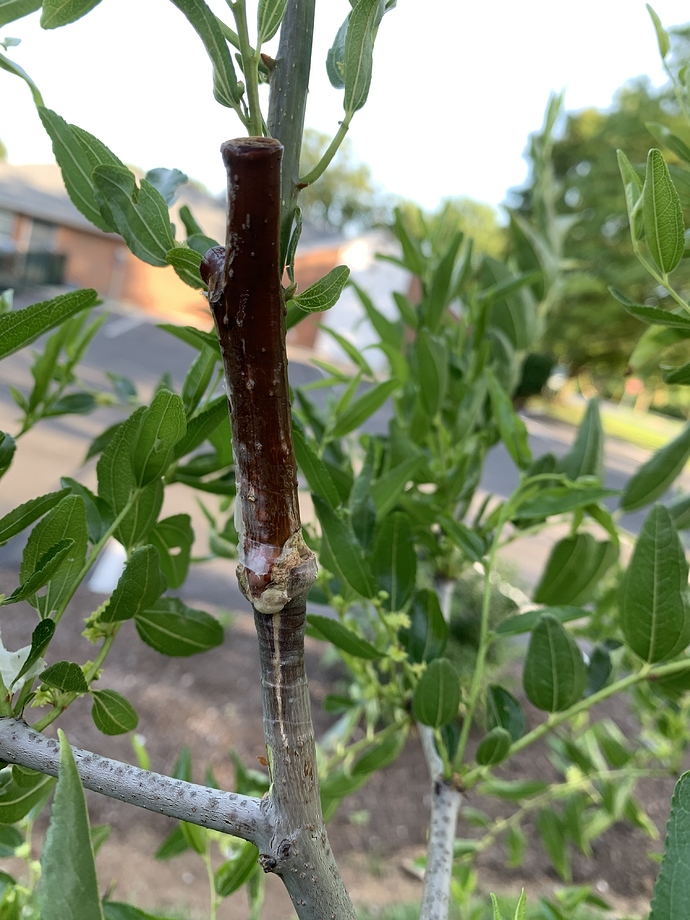 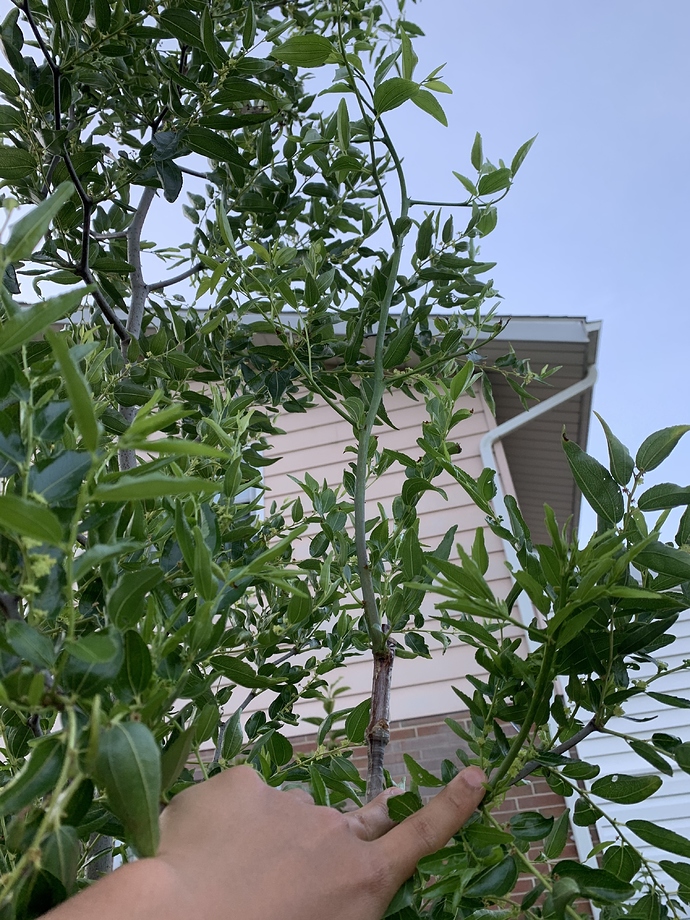 What variety is the graft and what is the mother tree?

I let my jujube grafts set fruit if they want to.

This is Hetian Jade on a Honey Jar I planted 2 years ago. The mother tree is very vigorous and is about 10 feet tall. This probably helps push a lot of growth out of the graft.

The Honey Jar and Black Sea a few feet away have been flowering profusely with many pollinators buzzing around. However, I see no fruit set! Temps have been in the 90’s practically everyday all month with rain once in a while. They get at least 10 hours of sunlight a day. Not sure what’s wrong.

What would you say is the largest size jujube that fruits on the east coast?

Sugar Cane, Bok Jo, and So are mid-sized varieties that have had at least some production. None are really large, but it is hard enough to get them producing here.

GA866 is large, but many said it took forever to start fruiting.

Yes, I planted one in March 2016, and five years later, it still only produces a few flowers. Where other varieties may have 10, it has 1. And I’ve never seen a single fruit on it. I did graft a few other varieties onto it, which have been flowering a lot more and at least one of them has fruit on it.

My Shanxi Li has large fruit. It has two strikes against it:

I’ve had the same experience with it so far (2 trees planted in 2016), but this year one of them has a decent amount of fruit (it has made 1 fruit in the first 4 years) and the other one has a few (none in the past). I’m hoping that the quality and size also improve (the initial fruit from that tree and another graft haven’t been all that large so far).

Bob,
Our Shanxi Li were planted at the same time, 2016. Mine fruited about 10 jujubes in 2017, only a few in 2018 and none in 2019. It has flowered well every year but the fruit set has been poor. The fruit size were inconsistent but most were larger than Sugar Cane ( my SC size has been good, too).

It is only 8’ away from Sugar Cane and 15’ from Honey Jar. Last year, I had enough of Shanxi Li so I did at least 12 grafts on it. This year I grafted 4 more on it. Several grafts from last year have flowered this year

To my surprise, when I was ready to spray GA 3 on it this evening, I saw several fruit on Shanxi Li. My guess is that HJ and SC may not be Shanxi Li’s good pollination partners. Some of the 10+ varieties I grafted on it must be.

@PharmerDrewee - my guess is that, HJ and Black Sea may not be good pollination partner (besides the trees being young). Graft more varieties to both of them will probably help.

I mixed a bottle of GA3 spray (a Windex/Home Depot spray bottle). and sprayed it this evening after the sun set.

The instruction said not to spray on the fruit. I checked my trees and found that HJ, SC and Shanxi Li all have some fruit set so I have to skip 95% of them and only sprayed a few lower branches that seem to have no fruit.

I sprayed the whole tree of So (4’ tall) and Massandra (barely 3’ ) as they don’t seem to have any fruit. In the end, I have lot of spray left. It won’t be good after 7 hours. I ordered GA3 too late this year. I will be more prepared next year,

My guess is that HJ and SC may not be Shanxi Li’s good pollination partners. Some of the 10+ varieties I grafted on it must be.

That’s possible, but I think age could be an important factor as well. My Shanxi Li has been 5 feet from Li and Sugar Cane/Bok Jo/Tae Sang Wang (and within 15 feet from another 4-5) for a while , but it hasn’t been productive so far. Though there was initial fruit formation on it 2 years ago that dropped off.

I think the major factors are (but have no idea which is most important):
1.) Age
2.) Weather
3.) Fertilization
4.) Pollination (though I don’t think this has been an issue for me, given how many types I have)

I’ve been very attentive this year in terms of fertilizer. Maybe each month. In past years, I’d do it maybe once or twice a year. I also added GA3 into the mix, though there was initial fruit on the Shanxi before that (maybe it also helps avoid drop?).

I suspect that all you need is one thing to not be good (bad weather? poor soil? too young for heavy crop?) and you don’t get much. A bit frustrating, but once I can get them consistently fruiting (knock on wood), maybe I can take away one thing (ie fertilizer or GA) from one or two trees and see which are the most important.

The instruction said not to spray on the fruit. I checked my trees and found that HJ, SC and Shanxi Li all have some fruit set so I have to skip 95% of them and only sprayed a few lower branches that seem to have no fruit.

Did it say why to avoid the fruit? Hopefully it doesn’t cause it to drop…I think high concentrations can cause fruit drop, but I didn’t think that was a problem at 10-20ppm. Of the ones I sprayed, some had small/tiny fruit, like the Shanxi. Others, like Sherwood, only had flowers (a week later, it now has a handful of small fruit).

GA3 too late this year. I will be more prepared next year,

Me too- it would have been great to start getting fruit-set back in June. I’m a bit concerned with how long it will take the newly set fruit to ripen. I suspect that it will be well into October, so hopefully we have a warm autumn.

I need to read the instruction again re. why it is not recommend spraying on fruit.

This made it near impossible for me to spray HJ, SC or Shanxi Li because each branch may have a couple of fruit and a bunch of flowers.

Spongy texture is probably cause by inadequate water.

I don’t know about what is largest on the east coast, but these three were largest for me on the west coast - Shanxi Li, Li, Dae Sol Jo 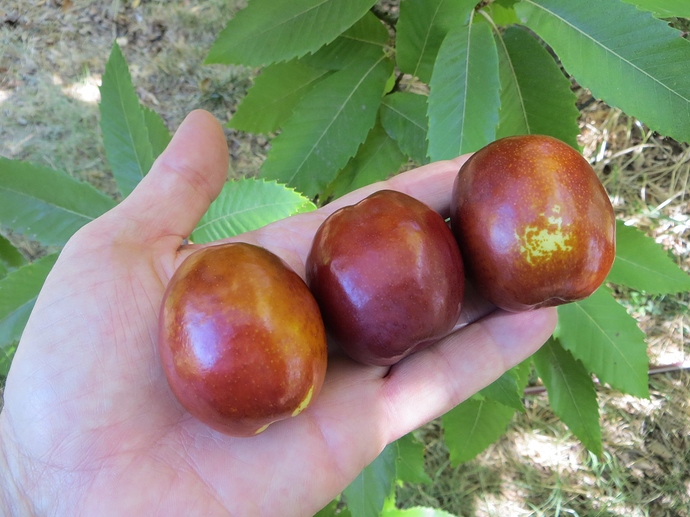 That’s not bad size. I have the li so nice to see they are decent size. How would you rate li for sugar and taste? Good enough to buy another?