Then what did you mean to say jujube seedlings were preferred over and above? What are the other options?

I was also thinking, though, that seedlings might be preferred because they might not tend to sucker as much as if one selected for those trees that produced the most suckers. Although, on the other hand, I suppose one could select for those suckers which were least abundant.

I was also thinking, though, that seedlings might be preferred because they might not tend to sucker as much as if one selected for those trees that produced the most suckers. Although, on the other hand, I suppose one could select for those suckers which were least abundant.

I don’t know the answer, but I hypothesized almost the exact same thing a few years ago (I just did a quick search, but couldn’t find the post). Great minds

If you grow on suckers, the trees with the most suckers will be a majority of what you grow, making lots of suckers even more likely. You are basically applying a strong selective pressure, where non-suckering rootstocks won’t replicate and the most prolific get get a boost. But, suckers haven’t been a big deal in my applications (most would get mowed, if I wasn’t looking to harvest them), so I’ve started digging them and potting them up for grafting next spring. I’m also growing seedlings, but that seems to be a very long process for me. I’ve got some which are 3+ years old and still only 2-3’ tall.

I suppose that you could look for trees that only sucker once in a blue moon and take those, but you won’t get many candidate that way. I wonder if you can prompt suckering with root-cutting?

My Shanxi Li is bigger than Sugar Cane. 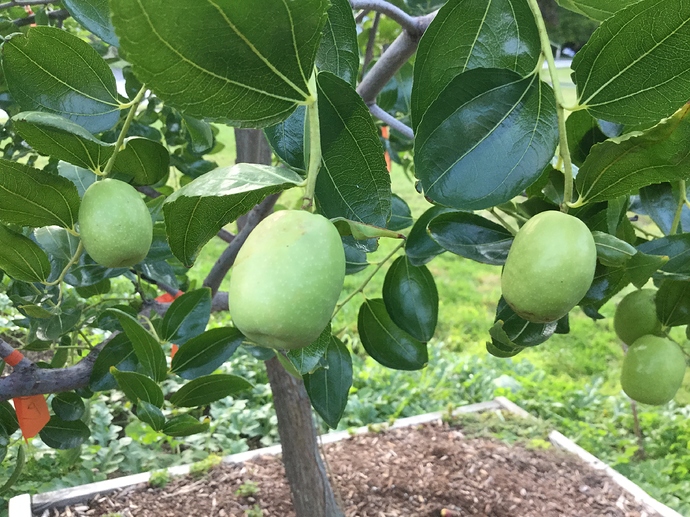 But my Sugar Cane is the first one ripen!!! 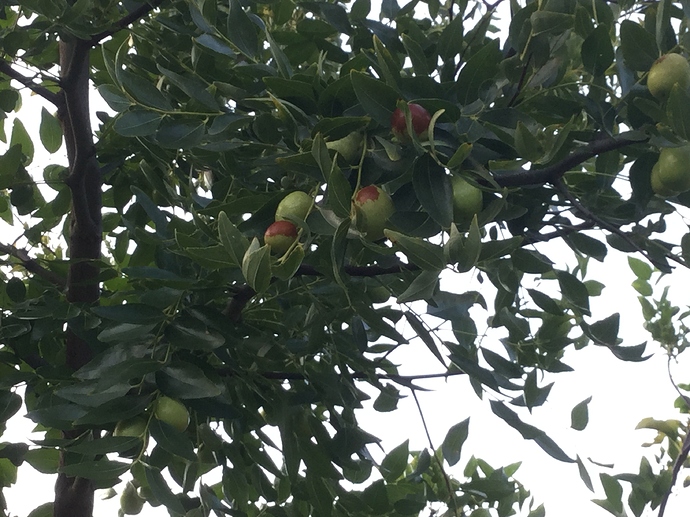 My Shanxi Li is bigger than Sugar Cane.

Mine too. But there are only 9-10 large fruit on the Shanxi Li tree. There are a few smaller ones too, which it wouldn’t surprise me to see fall off.

Here’s a big one from this morning… 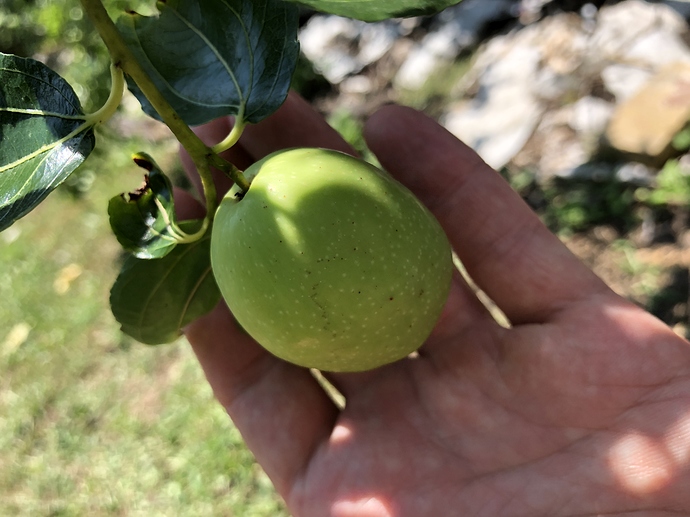 Not all my trees are on the same schedule. One Honey Jar is getting close to ripe, and another (at a different property) just set fruit a few weeks ago. But boy did it set a lot. The one that is close to ripe set a few very late in the season last year. They ripened enough to be edible, but not good. Maybe the same will happen with the larger ones from this pic. 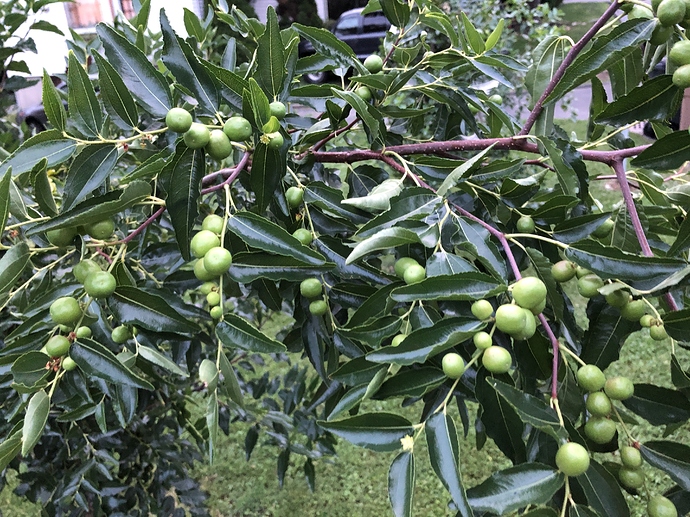 I had some extra time due to a late softball game, so in addition to mowing the lawn there, I removed a very old stump. I talked to the neighbor and he said it was over 10 years old, originally cut down 2 owners ago. I thought it would be easy to break up, as it was well rotted, but the middle proved more resistant and I eventually busted the roots with an axe and rolled it out.

Surrounded by the circle of rocks is a newly planted TVA jujube. This isn’t as good of a spot from a sun perspective as where the above Honey Jar is. But it is growing on a sucker I harvested, so I’m not quite as choosy about the location, as I’m not sinking $50+ into it. If nothing else, I’ve smoothed out most of the area the stumps were in, so it should be a lot easier to mow. 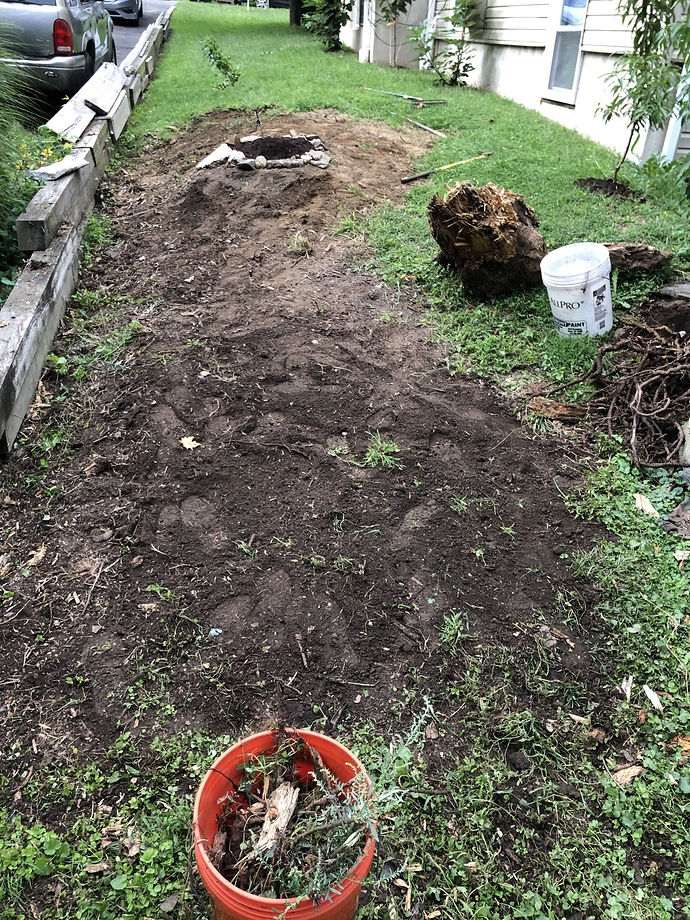 At the top of the pic, you can see where I put some figs close to the building for warmth. 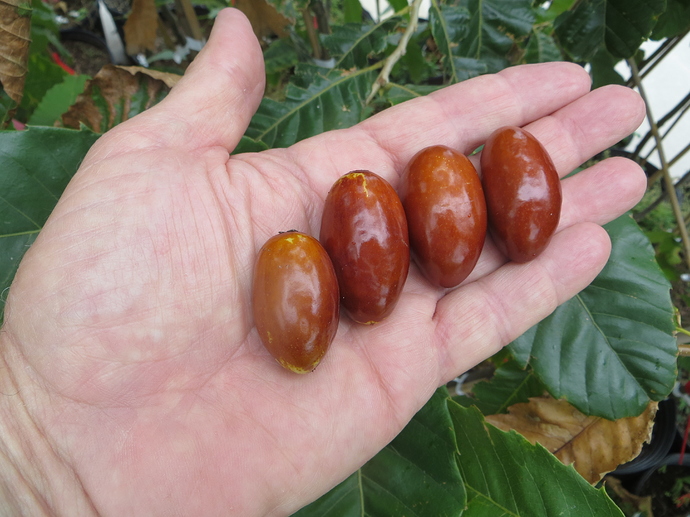 I am getting a few from Massandra

You showed a great deal of restraint in waiting until they were so uniformly colored. Were they crisp and have good sweetness? You just moved, so were these from a tree you planted this spring?

I really like Massandra. It’s sweet crisp and almost as juicy as HJ. I need it to grow into a tree instead of a two foot sprig!

These Massandra jujubes are from a potted tree. Massandra has a tendency to ripen fruit pretty uniformly. It has a relatively short crop window.

For me, Massandra is good, but not quite as good as Black Sea.

Tony, your TamKam persimmons look an awful lot like my alleged Izu.

I started this Jujube from a seed last year. It’s not growing as fast as I expected. But still nice to grow from seed. Trying to train it to get a tall trunk. 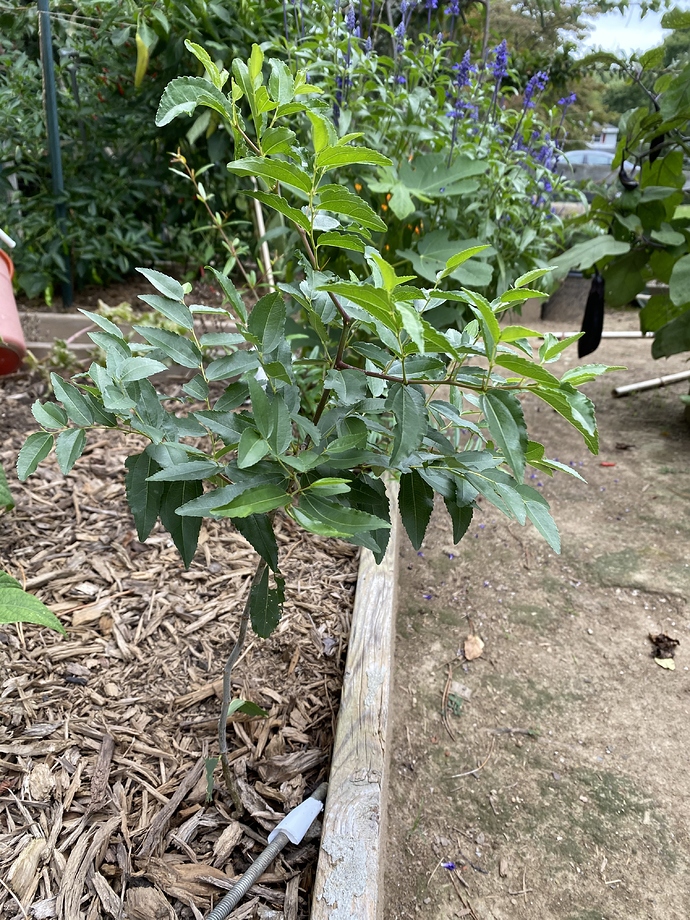 I got one small Black Sea this year. It was good!

I got 4 Black Sea today, about a month later than in California, but still superb. They are excellent dried as well, one of the best dried jujubes I have ever eaten.

I think my Tam Kam is a real thing because I got the scions from UC Davis. So if yours is like mine than it is maybe Tam Kam.

Looks like my TamKam too. I have fruit this year for the first time.

Yeah, if you saw my other thread with pictures of developing fruit on my “Izu”, they are lobed with ridges. Most pictures of Izu show it as being round. A horizontal slice should be like a circle on Izu rather than a 4 leaf clover

I’ve found only a couple pictures of Izu that look like it has some non-round definition, but web pictures can be unreliable.

This Texas A&M one being one of the few exceptions: https://aggie-horticulture.tamu.edu/fruit-nut/files/2015/04/persimmons_2015.pdf

@Susu,
If that is from a seed last year, I am impressed. I think yours has grown well. I just buried seeds in ground a couple if week ago. I want to see if any will come up.

I don’t think I have sunny spaces for jujubes, unfortunately.

My Massandra fruit last year ( first fruit) were tiny. Fortunately, they are bigger this year but still on a small size.