I think we all know where it comes from : Nikita Botanical Garden,Yalta, Crimea. They have the largest collection of jujubes in the world, apart from China. I was lucky to visit a small part of it thanks to Mrs. Litvinova and it’s huge. As for the original name you can try to ask OGW, but I doubt they would tell you…their trade mark would loose some credibility. Anyway, I think I’m having some idea what it is…but some fruit pictures seem contradictory.

@Harbin,
I think the differences in fruit shapes could be a number of things:

possible due to my black sea rooted-specimen and grafts still quite small as have been poaching budwood giveaways from it. 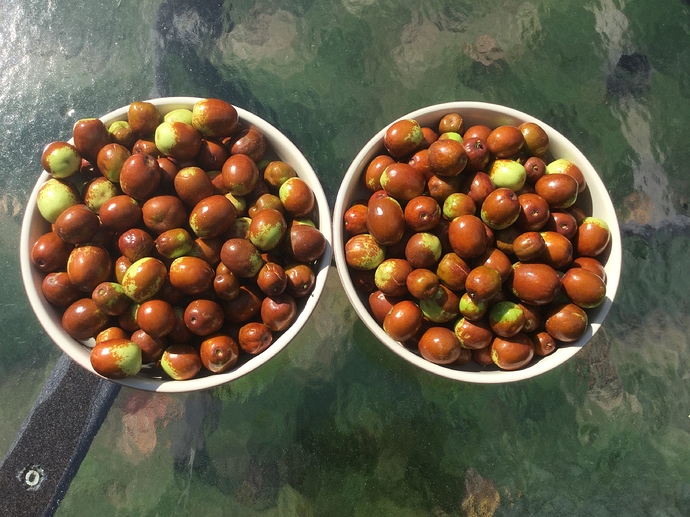 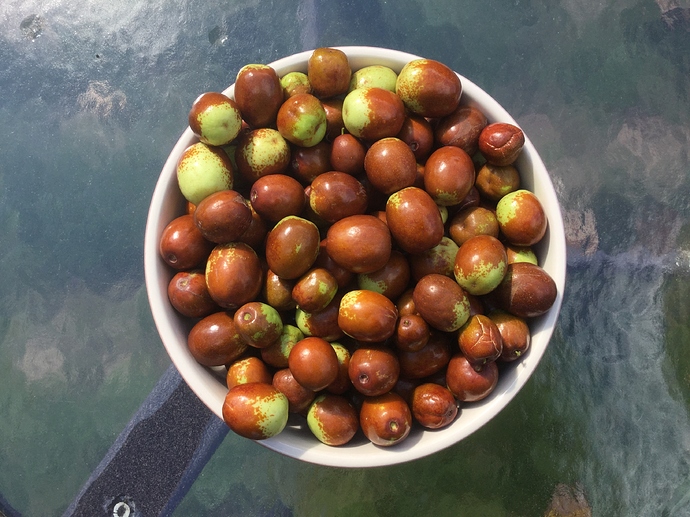 In russian confetti (конфеты) mean candys. So I think they namet them for their sweet or very good taste.

I do think, regardless, the “confetti” name is charming. 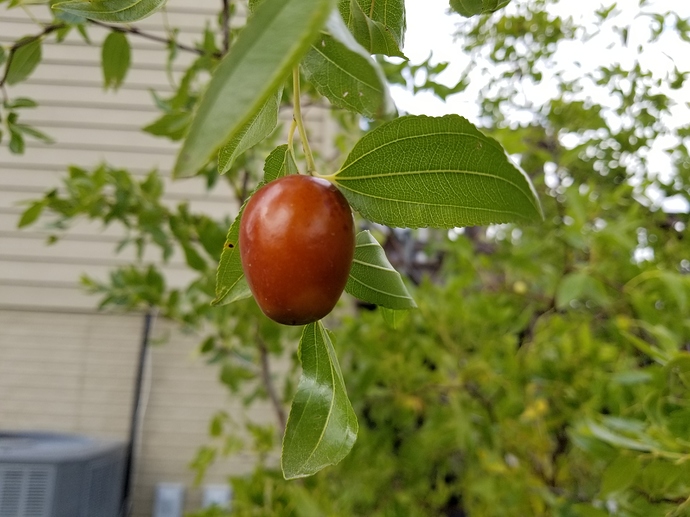 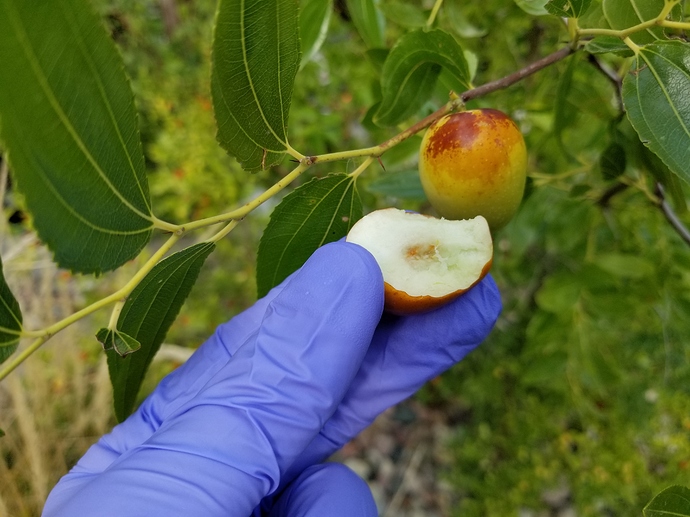 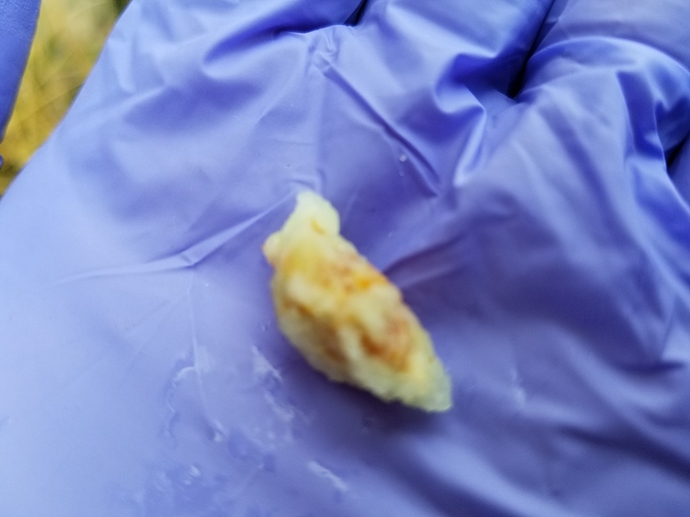 A little longer than HJ, denser texture, slight crunch, a little juicy, sweet but not as sweet as HJ. It is a keeper though.

HJ on the left and Orange Beauty is on the right still greenish. 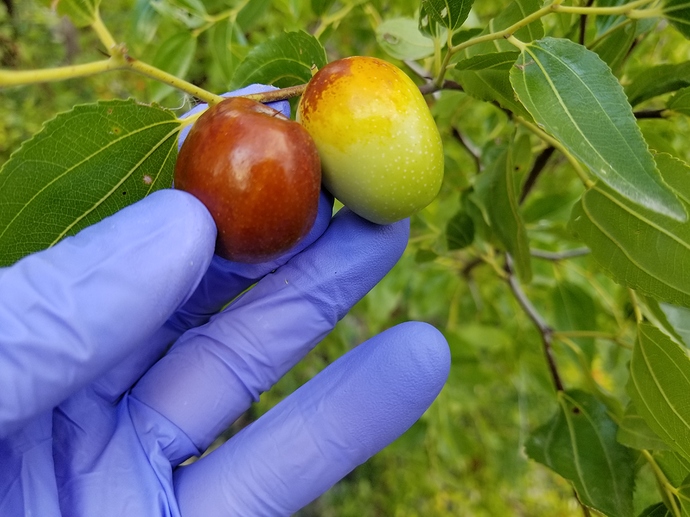 Tae So Jo is turning brown. 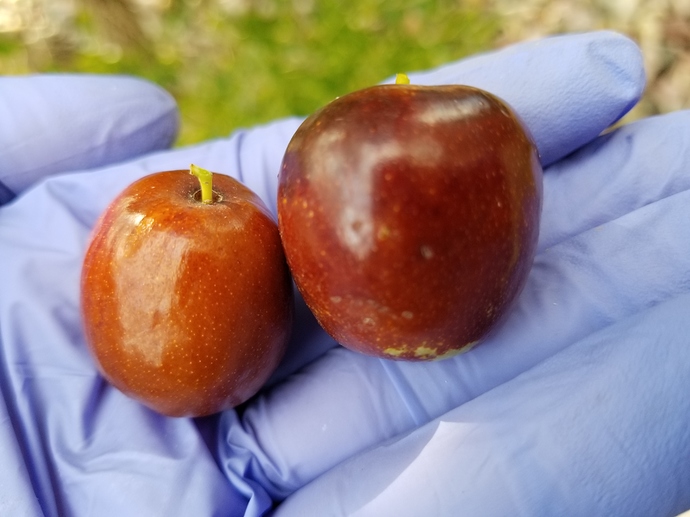 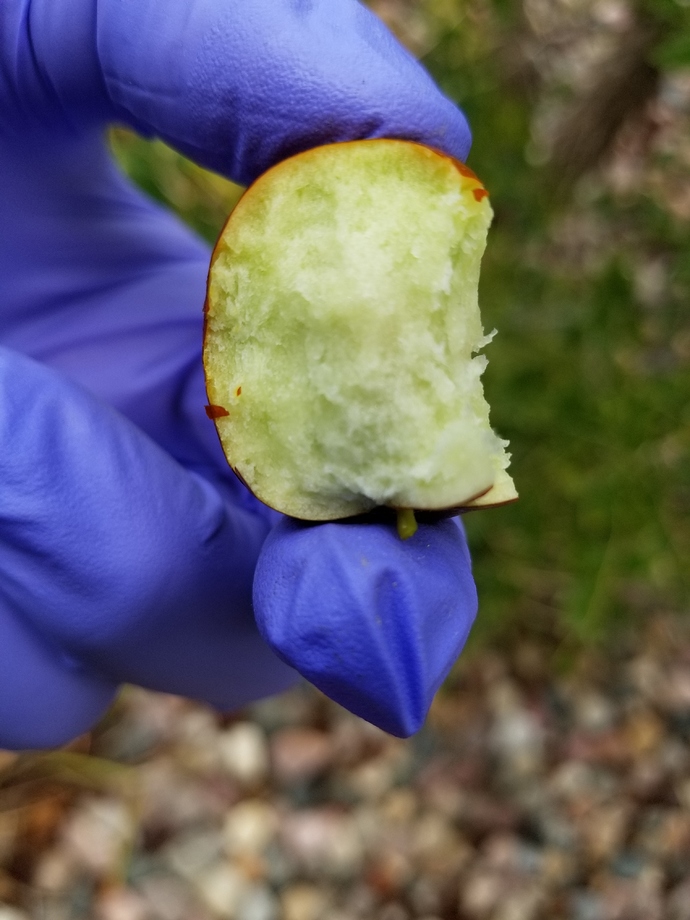 Small Halina cleft graft with 3 fruits from May 2020. Not sure if they will ripen in time. I would love to taste a ripe one because this is from Harbin in the Zech Republic. 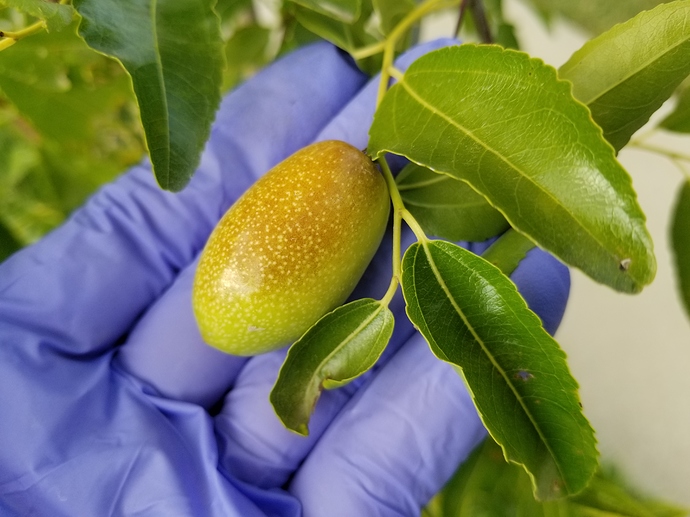 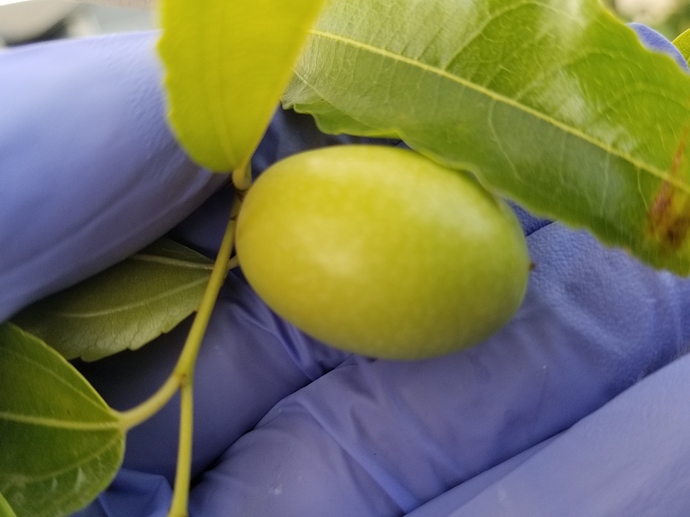 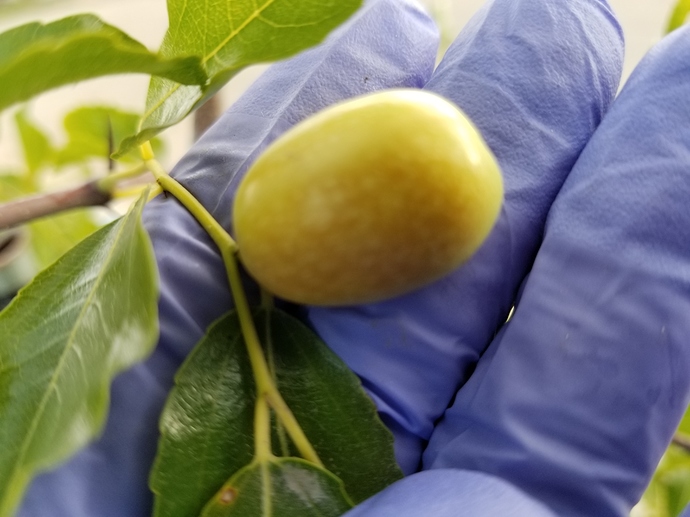 Tony,
Your comparison of those varieties to HJ is easy for me to understand

. Thanks for the pics, too.

Wow!! I’m so glad for your harvest. Most of mine are gone — all that are left is some second crop fruit and most are not ripe yet. Picked the last four second crop sugar cane today. Still have some Autumn Beauty, Sihong, and Li to ripen.

Strangely my second crop Chico is not much worth eating. Some have no flavor and some are pretty good until you get to the very strong bitter aftertaste. Not sure what that is all about…

My 4 yr old SC and and 3 yr HJ together will have produced at least 30 lbs of jujubes this year, with almost 70% of those are SC.

I love SC more than HJ, juicy, sweet, crunchy and much larger. No biter after taste grown here. They can be eaten partially green, too.

I got my Confetti and Empress Gee from OGW today. I had missed the shipping notification, so it was a complete surprise. Maybe I’m getting old, but I was trying to remember what I had ordered that might have arrived and coming up blank. 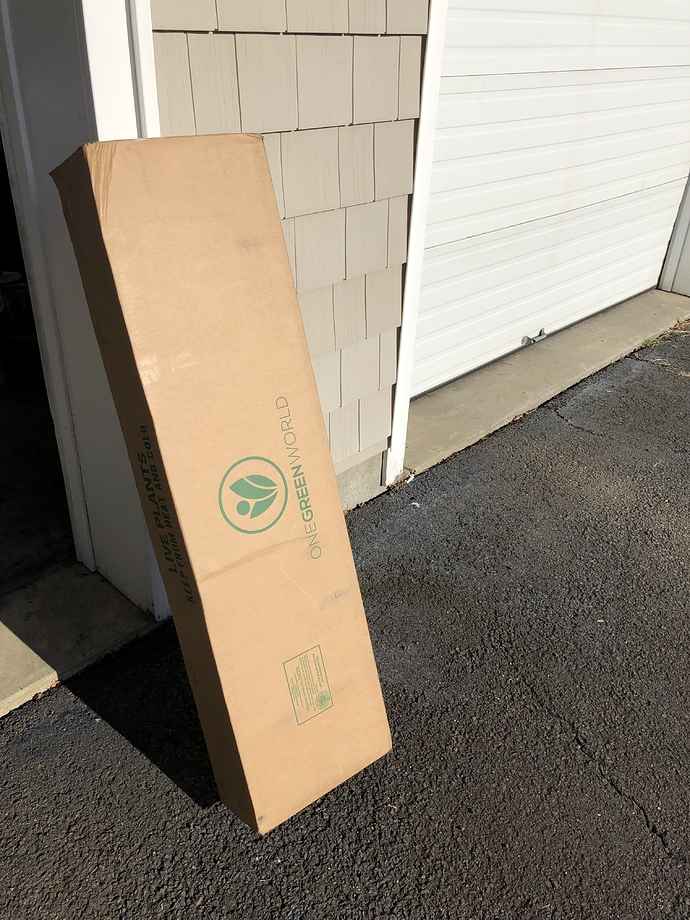 If anything, I think they could be even smaller than the past OGW trees. This time, they look like they were grafted onto small rootstocks this spring and saw 8-12" of new growth (1/8" thick). I immediately up-potted them to 2 gal pots. Next year I’ll make sure that they get plenty of sun, fertilizer, water, and possibly a larger pot. Maybe I can get them sized up a bit quicker this way, than just putting them in the ground and waiting 5 years. 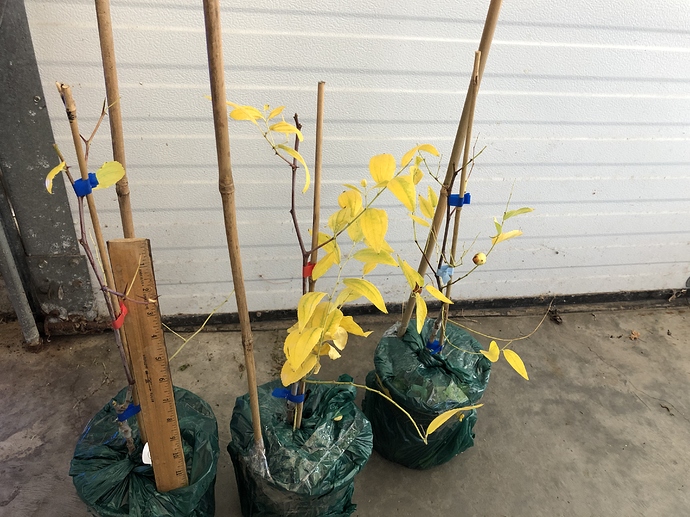 I don’t know for sure how good the Confetti fruit is. None of it is fully ripened.

I’m guessing that fruit was in the box on the tree(s) that OGW sent you? How many trees did you buy?

My Confetti only had 2 fruit. Of course, for a tree that is only a foot tall, having any fruits is impressive. 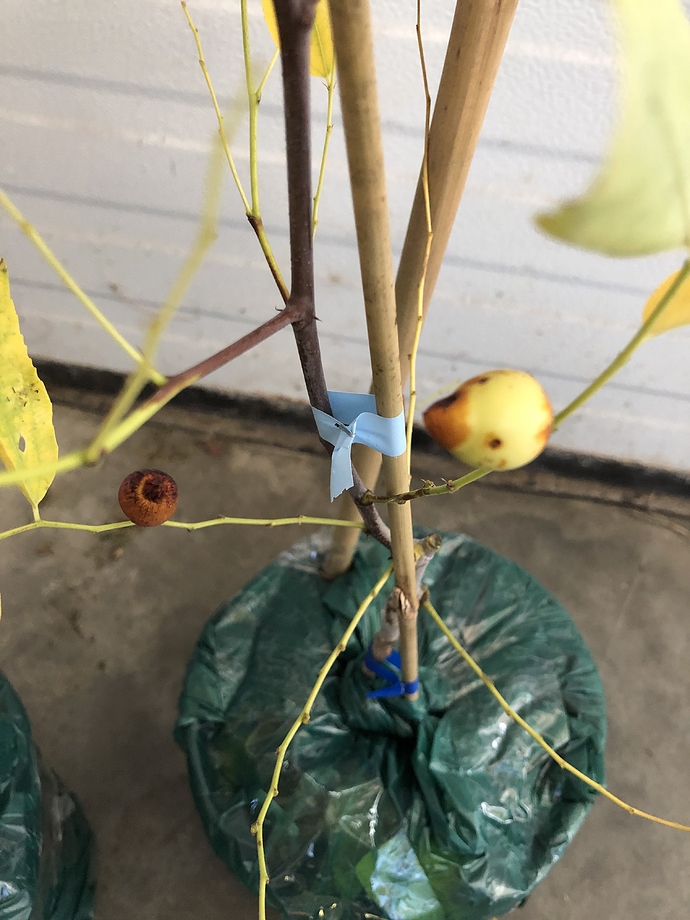 Thank you for showing what the trees and packaging looked like.

Did it take two weeks to arrive? Will you keep the pots in your garage?

I sampled some new (to me) jujube today:
Xu Zhou- I had a few, one with a significant crack. Unlike the cracks that XZ had for Katy, mine didn’t seem to rot and was fine to eat (Honey Jar also has some cracking). Unlike HJ, XZ wasn’t all that sweet at 18 brix. It was still fine to eat, but not super tasty like HJ/SC/BS. The texture was also a bit lacking. Not bad, but similar to Autumn Beauty (a few points lower brix than AB). I wonder if the tree holding such a heavy crop drops the brix a bit. 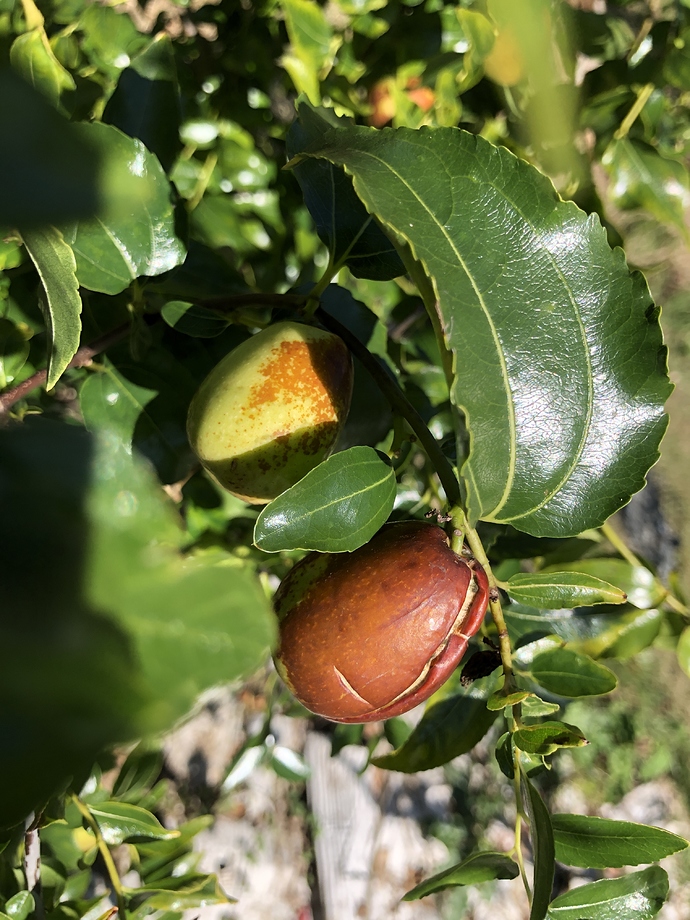 Maya- my 1st year tree only had a single fruit. It wasn’t large, but was pretty tasty. Given how small it was, I didn’t get a brix reading.

The Maya is the longer, pointed one, mixed in with a pint basket of So. The So fruit is remarkably varied this year. Some of it dried on the tree, even before it was fully brown. While others have a crisp crunch which is just a bit lower than HJ. There are quite a few which have some crunch, but not crisp juiciness. I’m thinking that the tree didn’t get enough water during the early to mid part of September. 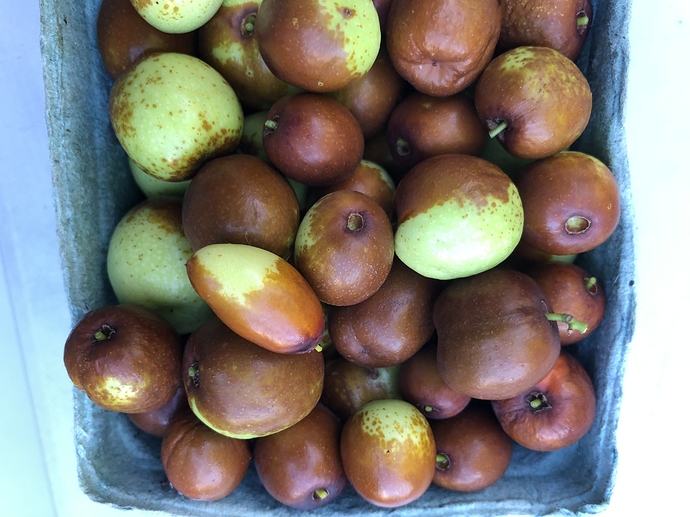 The Honey Jar at the shaded rental have started to ripen. More than half of the ones that I saw on there a month or so ago dropped off. But, the one in this picture was off the scale (over 32 brix), so what little fruit it made was very good. 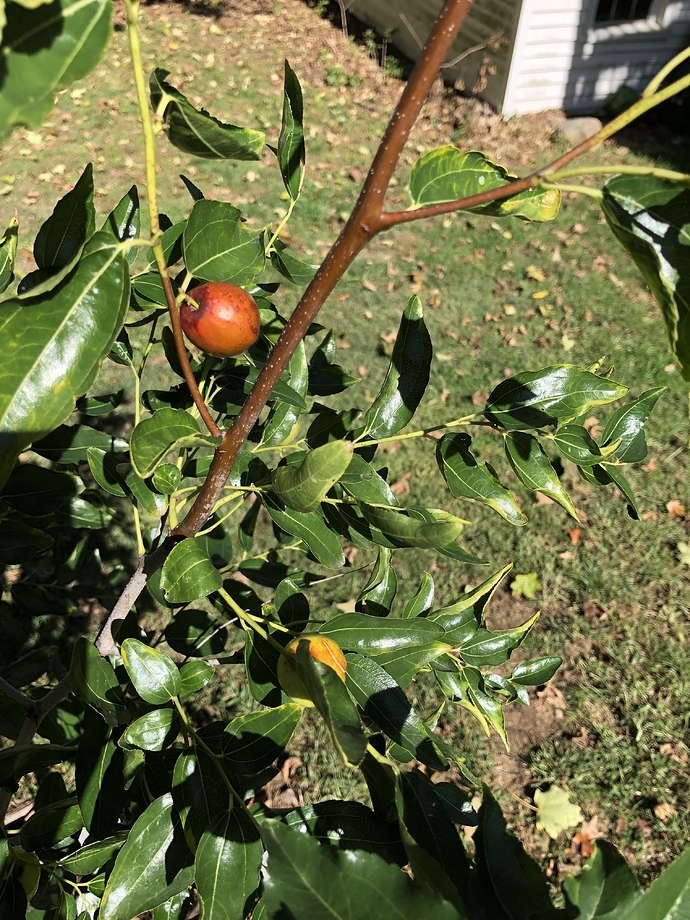 Some size comparisons:
Note that I also had a Black Sea that was 5.3g, similar in size to the HJ. Both BS had the nose tip, though it is hard to see in this pic.

The Massandra was also very good. Xu Zhou and Autumn Beauty are the laggards in terms of texture from this pic. But, I do like their size and productivity. 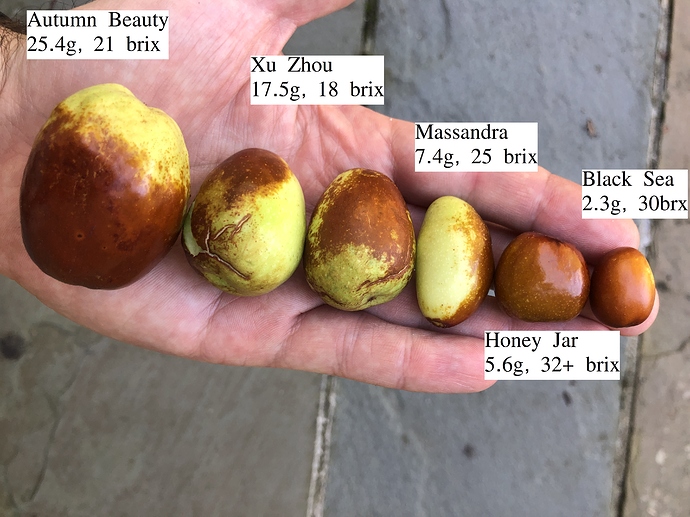 Did it take two weeks to arrive?

So from order to arrival was 8 days. Pretty fast.

Will you keep the pots in your garage?

Probably not. At least not unless we get a forecast of -20F (it hasn’t been lower than -10F in the 10+ years I’ve lived here). And I’m hoping we get another winter like last year (little snow and a low of 10F). They are already dropping their leaves, so I think they are on their way to dormancy. And we are a few weeks from a frost anyway (usually around the end of October). The time I had severe die-back was when I got potted jujube from FL (JFaE) and they were fully leafed out a day or two later when we had a hard frost. So I think I’m OK for now. I normally have potted jujube, apple, etc outside, but in a semi-sheltered location (adds 5-10F and reduces wind).

My 4 yr old SC and and 3 yr HJ together will have produced at least 30 lbs of jujubes this year, with almost 70% of those are SC.

That is great productivity! I’ve got a lot more trees and get far less fruit. I have enough jujube to graze on them while working in the yard and maybe bring in a pound (mostly of So) every few days. But given how only some of the samples (the ones with brix/weight readings) make it indoors, I’m not sure how much I’ve gotten this year.

And for the majority to be Sugar Cane is extra special. It was particularly good this year. Maybe a few brix lower than HJ, but with a lighter juicy crispness. The trees I order for the next rental will probably be 50-50 HJ and SC. Then, I’ll graft other varieties (like Bok Jo, Black Sea, and a few others on).

Do you eat all of them?

@BobVance,
I credit my jujubes’ productivity to their close proximity planting (cross pollination), a sunny location, watering and fertlization (thanks to @tonyOmahaz5). They are well-fed trees. Having a mild winter last year probably helped, too.

@mrsg47, I sold some to people who want them. My husband said I have eaten as many as I sold

Regrading cracking, my HJ and SC have had some cracking. HJ has more cracking. It looks like the kind in @BobVance’s pic. No rot, totally edible.

I found my photo of my one Black Sea fruit this year. 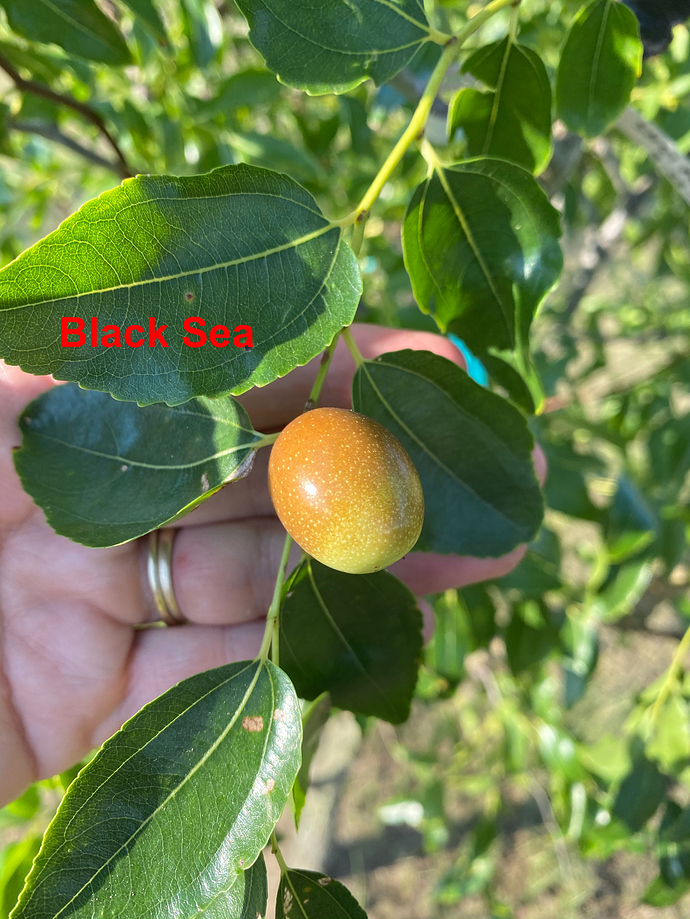