yeah it does sucker, a lot! 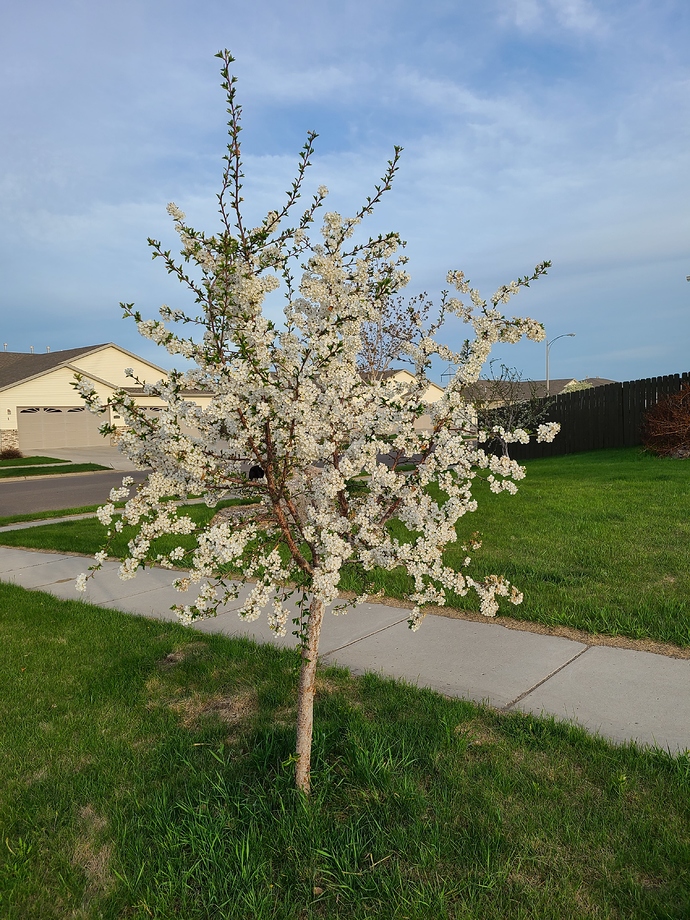 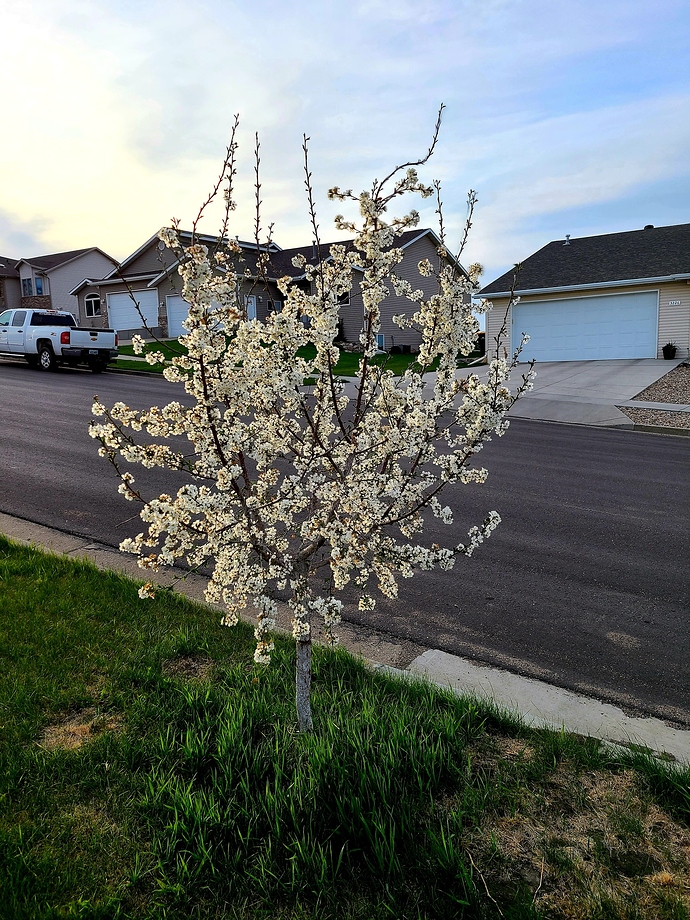 Those look really nice! I thought the tree forms were all grafted. Did those come like a tree like Vincent’s did, or did you do some pruning to groom it that way? I thought his were grafted.

I purchased a Juliet bush from my local nursery. It had blossoms on it when I purchased it. Got it home, took a few days to get a spot prepared for it and get it in the ground. Like mamuang mentioned it got a number of tiny green cherries on it, most of which turned red, some fell off. Is this normal for a first year? Can I expect bigger cherries next year? Anyone else have this experience?

Yes, seems similar to my experience with Juliet and Romeo. You’ll probably get some larger cherries next year, but don’t expect to make a pie. Good luck! 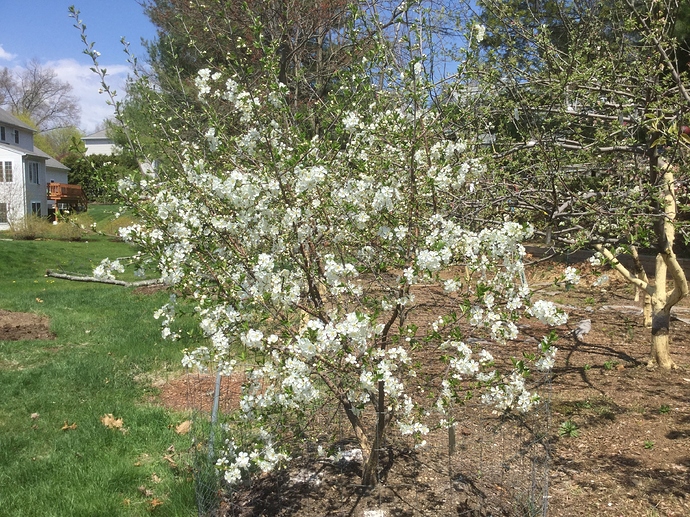 It flowered about the same time Black Gold Sweet cherry did. While it was blooming, temp went down to 31-32 F twice about week apart.

Juliet set few fruit compared to how much it flowered. I probably am getting about 10% fruit or fewer. 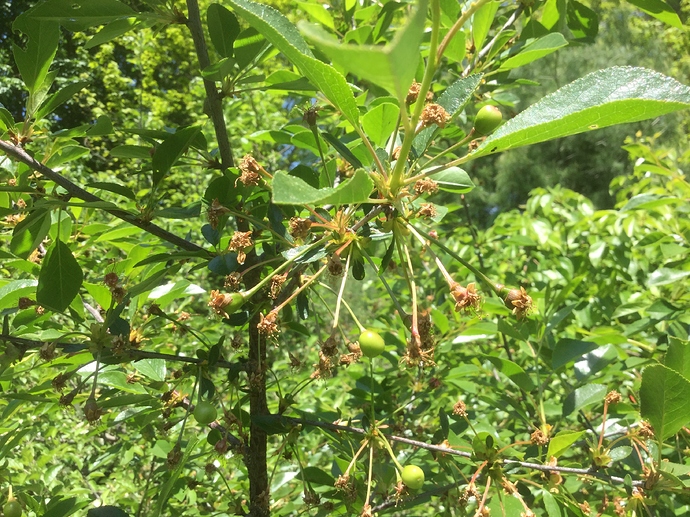 That the same time, look at my Black Gold. Set about 90% of its flowers and is very cold tolerant (proved it several times already.) 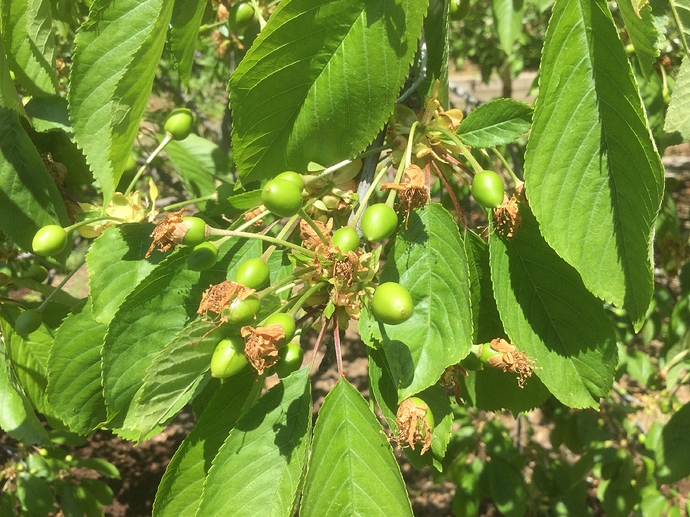 I had the same experience with Evans cherry, the second or third year it was fully loaded with blooms for the first time but 95% dropped. Such a build up to a let down! But it bodes well for the future, the plant looks healthy!
My Juliet has four fruitlets. I don’t have a whole lot of hope for trying one- I’m sure they will drop or get picked off by birds, oh well.
Your black gold looks nice! Fruit on their way to sizing up already.

unfortunately black gold won’t survive here. so I’m stuck with u of sask cherries as my only option.

Still to soon to tell but it looks like I"m going to finally get bumper crops of sour cherries. My two biggest Juliet’s have dark green stems with little cherries. Some still have the brown flowers on them so it’s early yet but my fingers are crossed. We went down to 25 deg before bloom and in the middle of sweet cherry bloom. I am surprised to see sweet cherries. After the cold it rained for three days. All my stone fruit was mostly bloomed for that weather.

@moose71,
I hope you like sour cherries. I found it a bit too sour for me. Talking about living in colder zones. I think Gardenweb member Konrad from Far North (zone3) has grown cherry like Bali/Evan successfully.

@Katie_didnt_Z4b, my two Juliet cherry last year were inside the bush covered by leaves so birds did not see them. I did use organza bags on them in case they dropped. I let them hung on until they were fully ripe.

Any idea how its sourness compares to a montmorency?

To me they are sweeter than montmorency. Cherries can be finicky… My Juliet has fruit but not a lot. Carmine Jewel has produced well for three years, but fruit set amount is not impressive either.A lot less than last year. White Gold is setting well, Both Black and White Gold seem to set well and are more consistent than many cherries.
On the other hand my plums have set a fast amount of fruit. I have some serious thinning to do. Even Nadia, which has never set well for me, is bulging with fruit, it needs thinning and the fruit is cherry pit size, it’s not gonna fall.
Peaches I can’t say yet.
I’m excited about the plums because I had bad set last year. Some had none. So my grafts and trees kept growing. This year I will taste many for the first time. Oh and a good year for plum grafts for me too. I added 4 plums or hybrids and they all took. I’m officially out of room for a bit. I did put a tree in and can graft on it next year.
I also have a pluot seedling which may be big enough to graft next year? If not the year
after. I don’t need a whole tree of one fruit. I would rather have others to stager ripening times. I don’t need a boatload of fruit all at once.

what type of plums do you have? Have you tried black ice? Im planting 10 plum rootstock this year so might be grafting them next spring…

what type of plums do you have?

No Euros, all Asian, yes I have Black Ice, one that will fruit for the first time for me. I heard it can split. I have a ton but most should have fruited last year, mother nature decided to make me wait. My favorite plum is Weeping Santa Rosa , although most of my tree does not weep, it reverted back. I’m trying to get the weeping habit throughout the tree. It does not bear many fruit so far, and I hacked about 1/2 of it off to encourage weeping. So it may have been loaded if I would not have gotten in the way.
So even though I have a lot of Asian plums, most I have not tasted, or have had limited fruit like on Superior and Toka, Both were good, and I think I will like them. It was not the best year here last year to evaluate them. My pluots were terrible last year, watered down, not much sugar produced during the short and cold summer. Much of the states have had above average temps, not here. Yesterday was the first time we broke 80F. No spring, winter to summer. I like the pluots a lot, and find them interesting. Although here too I have a lot I never tasted. Dapple Dandy, Honey Punch, and Spring Satin plumcot have been my favorites. I’m so loaded I will taste them all. Yeah last year most of my plums did not fruit, but many pluots did. Although again, watered down, decided to throw out some they were so boring.

My plums were bloomed when we hit that cold spell. There was three or four nights in the 20’s. They all aborted their fruit except Sweet Treat looks like it might have a lot of fruit. It just finally dropped it’s flowers and the stems are still green. We’ll see what happens soon. Apples are in full bloom so I can’t spray yet.

The sweetest sour cherry in my experience is Danube. Fully ripe Danube was sweet, almost no hint of sourness. Unfortunately, while it flowered profusely every year, it set very few fruit, an experience shared by some others Danube growers. I removed my tree due to its unproductiveness.

i almost put in a evans but they grow quite a bit bigger than other sour cherry and I’m limited in space. i have c.j, romeo , juliet, lutowka rose polish cherry and montmorency. id better like sour cherries as I’m about to be up to my eyeballs in them!

I have a Rose of Sharon and I decided to make it a single trunk form.

Rose of Sharon are easy to do. I have two with with 5 ft high trunks. Does need to be pruned heavy every year but it is quick. I cut the branches to 2 inches. They grow fast, about 3 or 4 ft, and flower nicely, Ill try a CJ or Juliet seedling.

Bob,
How’s your Romance series, particularly Juliet. Most of my Juliet turned red and fell off. 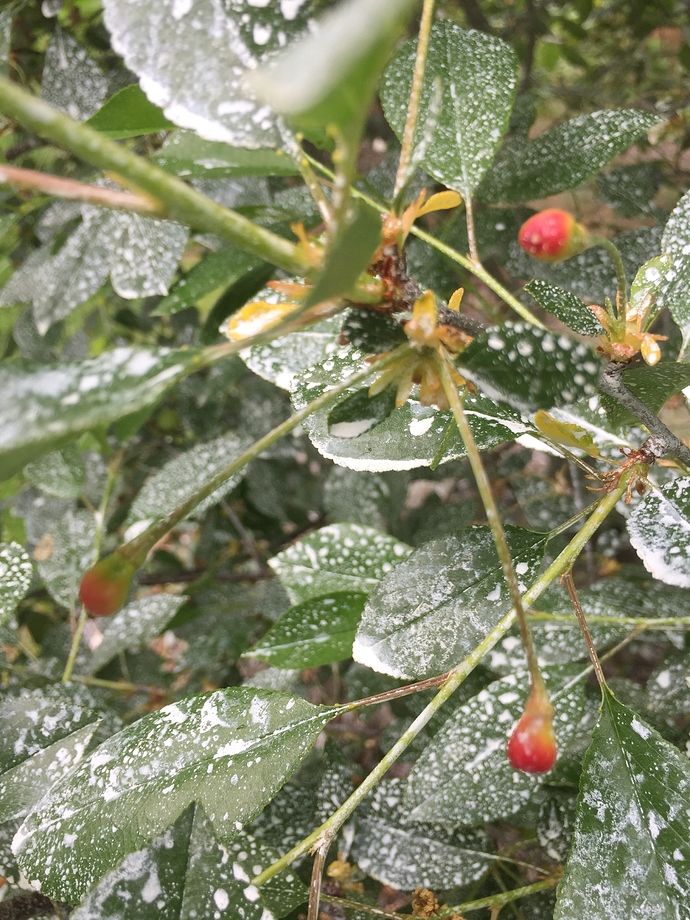 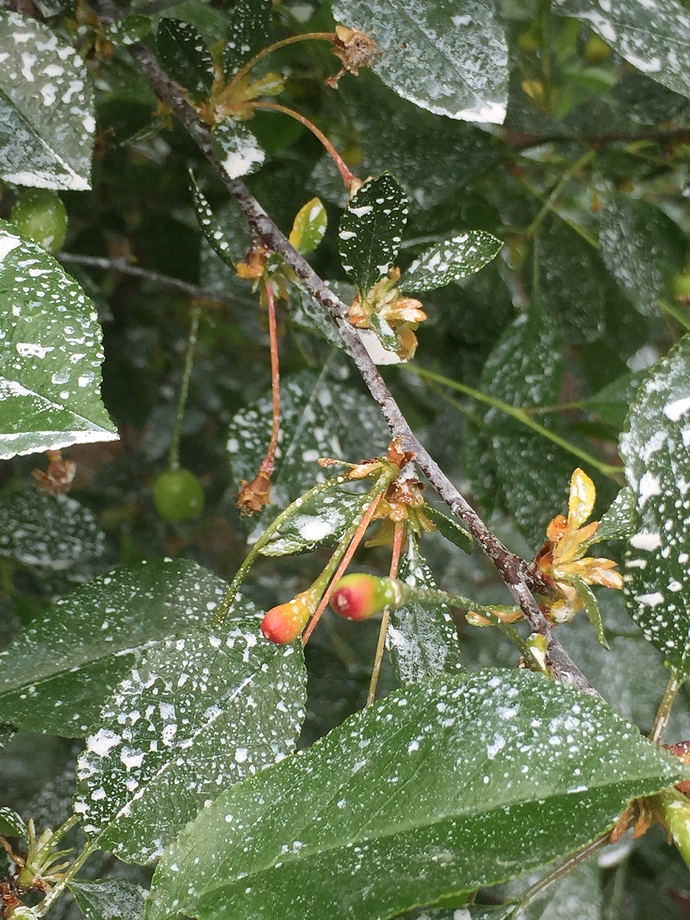 My guess is too young to hold on to the fruit or it was hurt by 31F during bloom.
Don’t think it was because of a lack of pollination. It bloomed with Black Gold which set very well.