I finally bit the bullet and bought some electric pruners. I don’t have an enormous amount of trees to prune, but I prune them mostly myself. It’s hard on my shoulders pruning hours on end, day after day, with loppers.

So I bought what I’ll call an electric lopper, and some electric pruning shears. This is a review, sort of. Or more like how I made my decision.

I wanted to try the electric vs. the pneumatic because I’ve seen the pneumatic first hand, and you have to be tethered to a compressor and drag a hose around, which didn’t seem very convenient to me.

I ended up trying something I think is in the middle. These Kamikaze electric pruners are made in China, but backed and designed by a reputable European company called Volpi. They are unknown in the U.S. but are a respected pruning manufacturer in Europe. 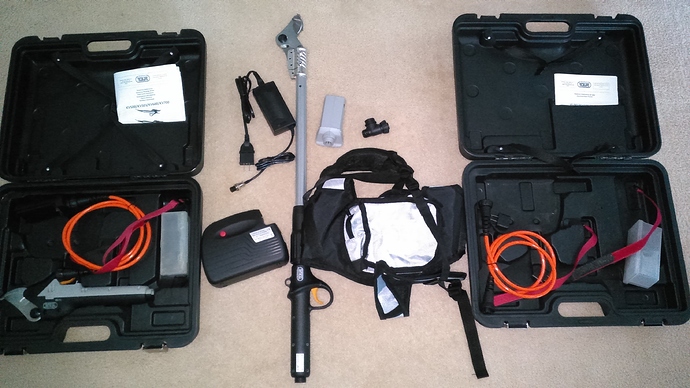 I looked really hard at buying an electric lopper from Infaco, but they wanted $2500 for the unit. I talked with a rep and he told me a replacement battery is $800! You’ve got to be kidding me. An $800 battery is a rip-off.

The cheap Chinese start-ups seem to cut corners every way they can on the pruners to keep them super cheap. Little things like they don’t put a battery level indicator on the battery, and no charging indicator on the charger. So you don’t know when to charge the battery. And you don’t know when the battery is full on the charger, which leaves a high probability of overcharging the battery, since the chargers are not smart chargers. And once the battery goes bad, I didn’t know how easy it would be to get another battery. A lot of the Chinese start-ups aren’t real good about making replacement parts available. Plus I have some concerns about reliability.

I have no idea of the reliability of these Kamikaze pruners yet, but Volpi backs them with the same 2 yr. warranty as they do their high end European manufactured pruners (2 yr. warranty is the standard for high end Euro electric pruners). After inspection, the quality seems good to me. The battery has an indicator of how full it is. The charger also has an indicator to tell you when the battery if fully charged. The battery is supposed to be made by Sony, so I’m wondering if the battery might more easily obtainable, once it goes bad. Plus Volpi uses the same battery on most of their different Kamikaze pruners and loppers, so that seemed more standard like to me, and probably more battery availability in the future. Battery is typical for these commercial units and supposed to last 8 hrs.

I got the KV80 lopper, which is 80cm in length. They make longer ones, but I wanted one about the size of a lopper I use. I think it will be much more handy than a regular lopper because it will fit in much tighter places than a two handled lopper.

Again, I haven’t used these units yet, except just to play with them in my living room. It’s bitter cold right now and quite a few inches of snow. I’m not pruning in that kind of weather, unless it’s life or death. So I don’t know if the units are comfortable to use, or not.

From inspection, I think the mechanical reliability will be very good. I have no idea about the electrical components like the controller. But again it’s supposed to have a 2 yr. warranty. Because it’s a reputable company, I expect the warranty to be real warranty.

I’m anxious to get out there and chop something with these. Hopefully not my fingers.

Thanks for the review Mark. Those look very similar to my Zenport Chinese pruners, it could be that the same manufacturer in China built both types.

So far my Zenports have been working well. The pole was flakey so I had to replace it; once that was working I have had no problems at all.

For me I have repetitive injury issues, and I had to go slowly and string out pruning over a long time to get it done. With the Zenports I can really crank through things.

With the Zenports I can really crank through things.

I think the electric lopper I got will help me too. I’ve have a set of manual geared loppers and a set of Bahco loppers. Both of them wear my joints out using them all day. Plus bending or walking into the center of trees with manual loppers takes a lot of time and is hard on the body, doing it all day. I’m hoping with the electric loppers I can stand more a little more on the outside perimeter of the trees and just reach in with one arm with the electric lopper to get some of the inside stuff.

Yes, the upper stuff is much easier to prune with the pole. Holding your arms high with loppers really tires them out. The only thing I don’t like about mine is I have to convert from lopper mode to handheld mode and it takes about 5 minutes to do the conversion. You have two sets of blades it looks like so your conversion should only take a minute. The way I do it is I do low pruning and high pruning separately, usually starting with low and what I can’t get I come back and do the high stuff with the pole. I also get things I may have missed that are lower, its not hard to also do lower pruning with the pole if you stand back far enough.

I finally bit the bullet and bought some electric pruners

Have you found a easy way to prune the branches that are too large for electric pruners?

I need to reduce the height of lots of scaffold branches on my peaches that are too large to cut with electric pruners. Last year I sawed them while standing on a ladder which was too time consuming and this year I need to cut a lot of scaffolds that I can not reach from the ground.

Have you found a easy way to prune the branches that are too large for electric pruners?

For the really large scaffolds I’ve removed, I just use a good hand saw. As you know, peach wood is pretty soft and a good Silky saw goes through it pretty fast.

I can see what you mean though, trying to make cuts off a ladder. I’m curious why you don’t just cut them lower, so you don’t have to be on a ladder? I refuse to allow anything beyond what I can reach from the ground (or maybe a little higher, if I can pull the branch down to my height with my free hand. If anything is taller than that, I just cut it back. You know, cut it to a lower outside growing shoot and let that shoot develop into a lower growing scaffold.

It sometimes sacrifices a little production for a little bit, but then it becomes productive and is easier to prune.

I haven’t used the electric loppers yet, but they are supposed to cut about 1.5" dia. That’s about as big as anything I cut with my manual loppers.

I’ve seen some electric pole saws out there, but golly I don’t know how you’d thin very easily, or pick, with stuff that tall on a peach tree. How’d you do it this season?

I envision myself screaming the name at the trees, in a crazed maniac state, as I invoke maximum damage with these tools, on those enemy waterspouts.

I’ve seen some electric pole saws out there, but golly I don’t know how you’d thin very easily, or pick, with stuff that tall on a peach tree. How’d you do it this season?

A lot of scaffolds need to be lowered but I don’t believe I have the energy to get it done without some power assistance. Hiring some labor would solve the problem too.