I’m about to buy my first Keewee set. I understand the yellow and gold are popular because they’re sweeter not as tart. However, it sounds like the green Keewee’s will store much longer, even the whole winter. Is this correct?
Standard green gold and yellow ones have no Real appreciative difference as far as growing difficulty or harvest time?
Thanks

I can store the yellow kiwis most of the winter. The big yellow and green ones (chinensis/deliciosa) are very similar but the yellow ones are less sour and more aromatic. The small red ones (melanandra?) are also excellent tasting if you can find one in Japan.

No, Scott, not melanandra. regular kiwi chinensis/deliciosa size and looking, but inside has some dark red meat near the center

Interesting, never heard of them. Have you seen them in the US? All Google pulls up is some New Zealand breeding efforts, maybe some of those fruits are shipping to the US.

Not in U.S, I had them in China last year. I believe it was imported from New Zealand or Australia, somewhere in that corner of the world

Haven’t seen any red Keewee’s around here. Scott, so the yellow and green Keewee’s can store exactly the same or is there a shelflife difference at all?
I’ve been to all the local places that sell plants over several days, and I couldn’t find any matching Keewee’s. I thought there might of been a run on them or something. Then I figured it out: in green, Haywood is only male, and crossed pollinated by Tomlin which is only female.
Golden King is also called Rocky which is only male, but it pollinates both “Yellow Kiwi” and “Apple kiwi”.
So in short, there’s just three fruits (but 5 kiwi plant types): green Hayward; yellow kiwi; and yellow apple shaped kiwi .
This wasn’t indicated clearly, and my Japanese isn’t that great, so it was very confusing.
By the way, here’s that Apple Kiwi I’m talking about: 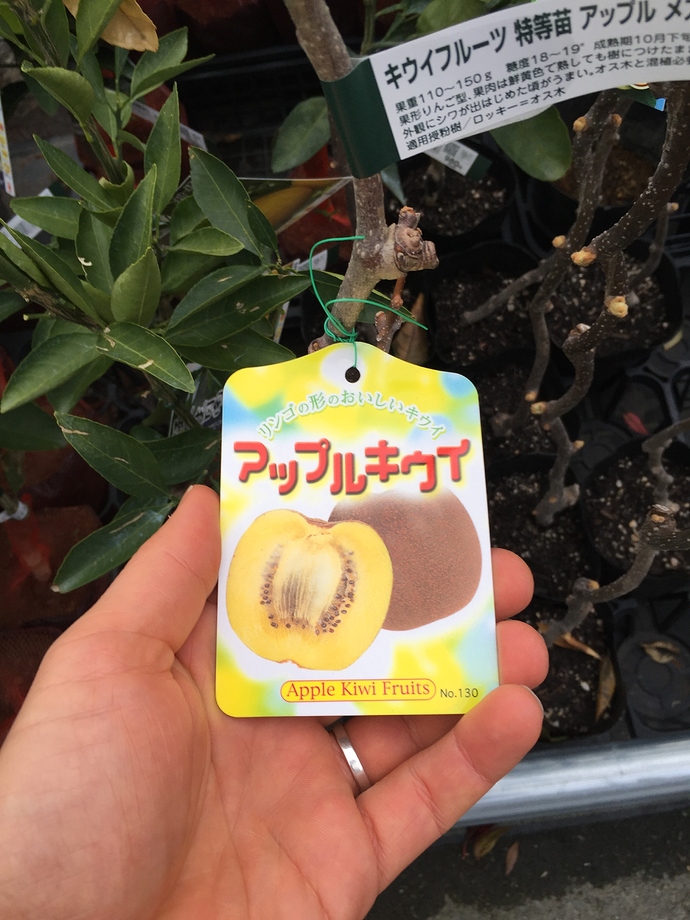 image.jpeg2448×3264 1.87 MB
I believe it said it’s 18 or 19 brix, and it starts producing fruit year 3 on, and ripens earlier than Hayward.
Today I bought a pair of the green ones. We have a golden one established in the garden from last year, but not sure if it’s a male or female, I guess we’ll wait till flowers. I’d like to try the gold ones too, but space is getting limited.
1 Like
scottfsmith April 2, 2016, 9:37pm #8

Hayward is a female green kiwi, and Tomura (probably the same as your Tomlin) is a male. The apple kiwi does not exist in the US, I have never seen anything like it (same as the red one from NZ/China).

The many kiwi varieties vary a lot in their ripening. There are early ripening green ones and late yellow ones, as well as the other way around. Of my larger kiwis the varieties ripen in order something like yellow-yellow-green-yellow-green-yellow. So maybe the yellows on average are ripening a bit earlier, but its more variety dependent as opposed to color. Storage is all related to ripening, later ripening stores longer than early ripening.

That’s interesting Scott. So storage time is simply proportional to when you harvest it, not some magical quality of the fruit.
Green ones cannot be eaten off the vine?
Are the different standard varieties you know of basically the same effort to grow?
I have to try this Apple one it sounds very mysterious.

They can be eaten off the vine if you have an early ripening variety and a long enough season. The only ones I can eat off the vine are from my earliest yellow variety, and that is only in some years.

I’m about to buy my first Keewee set.

Very climate dependent. For my climate I had great success and high quality fruit from Vincent, using Tomuri as a pollenizer.

Thanks fellas. Scott you are correct I bought a Tomuri (not Tomlin). I’d like to get 2 gold varieties, but no idea how to shuffle my current garden to fit everything. Keewee sound like they have to be separated quite far, and then they expand quite far on top of that. I guess I could jam them in now, get a years growth, and move later if required.
There’s only a few places in my garden that have naturally good soil, And the potential to build a large trelliswork that won’t be in the way .
All the plants were transplanted into the garden last year. So this year should be definitive in deciding what will thrive there or not.
I take it they’re like most largish plants and perform best in deep (over a foot) rich moist soil without violent wind?

I guess I could jam them in now, get a years growth, and move later if required.

You could control 2 Kiwi plants (a male & female) to a single 30 foot span with religious pruning. Expect large diameter trunks within a few years.

Thanks. 30 feet is still a lot for this garden.
If I had to give one a rougher spot to live, which would be tougher: kiwi vines or peaches and nectarines? Still not too late to do a last minute shuffle.
More spots may open up next year when this season reveals ho stuff does. For now I have some spots that either have good but shallow soil (hits rock after a foot), or deep rich soil with weed pressure from invasive bamboo etc.

WAIT! I just planted an Anna Kiwi and a polinator that came with it, even though I’ve never tasted Hardy Kiwis. Are you guys saying that they are too sour to eat off the vine? I thought they were suppossed to taste somewhat similar to fuzzy kiwi (but much smaller and smooth skin). Is that not true? I’m big on sweet, so if you are saying hardy kiwi are all really sour I probably need to give up on them b4 I put a lot of work in for the next few years. Or am I misunderstanding?

I just planted an [xyz] even though I’ve never tasted

Not a good practice unless you have time and space to experiment.

You are absolutely right, Richard ( @Richard ) . But I do have both of the exceptions you mentioned (time and space), and I have almost no hope of being able to try hardy kiwi since I don’t know anyone in my area that grows it, I’ve never seen it at any of the farmers markets I went to last year, and I don’t think I’ll find it in any retail stores here. In fact, I had already planned to try and beg someone here to send me some to try during harvest this year. Meanwhile, I just picked up a couple inexpensive ones at a local big box store. So I have very little invested, I’ve got plenty of space for them, and time will pass whether I have them planted or not.
But again, I think your advice is sound in almost all other situations. I’ve planted a couple plum varieties I’ve never tried and I already thought that wasn’t a very smart thing to do. Investing 3-5 years of care in a tree only to find out I don’t like the fruit would surely be disappointing. My only defense there is knowing I can top work it and take advantage of the root system if I want to. But still, not a good way to find out whether I like a fruit or not.

Sounds like you need a CRFG Chapter in Nashville.

You have no idea how much I agree with you. In fact, I’ve looked quite a bit for ANY local fruit growing groups, clubs, etc. I’ve contacted the Ag Extension office in 2 counties, and I’ve contacted the Master Gardener groups in 2 counties- both just to ask if there are any fruit growing clubs, organizations, hobbiests, etc. The extension office said they don’t even teach the 1 day class on growing fruit that they used to do once a year because it got to where no one would come. The Master Gardener folks in both counties said they have either NO fruit growers or only 1 or 2 who “dabble” in it. WOW! Very disappointing. It really would be nice to find some local folks with experience and so we could try each other’s fruits, trade scion wood, and so on. I’ve even asked a few orchard owners in the area if they are aware of any other hobby growers or groups/clubs- nope. I guess the TN/KY area just isn’t a hotbed of fruit growing! Even here on Growing fruit, if you look at the map of member locations there is just one person within probably 250 mile radius of me ( @RobThomas ). Oh well. All the more reason to appreciate my Growingfruit.org friends!

BTW Richard, for whatever reason, I was really captivated by the photo(s) of your large banana trees behind your house last year and I’m curious if you got any bananas off of it last year. Better still, did you take any photos of it with actual bananas on it? Just curious.

The hardy kiwis are in the same ballpark flavor-wise as the larger green ones. They can have a more concentrated flavor and it is different in some dimensions, but not a lot more sour.

@TheNiceGuy, you don’t need 30 feet for a kiwi. I have 10-year old kiwis that have no more than 4’ on the trellis. My secret? Prune! I have some battery-operated hedge trimmers and I give them a buzz cut a couple times a summer. It takes all of 10 minutes to prune 60’ of kiwi trellis I have. I have 21 different kiwi plants in my 60’.