Korea Giant from Gouney’s - is the black spot on trunk fireblight or black rot?

I just got the pear tree today. Tree itself is good size with nice roots. But after close examination, there are at least 3 black sections on the trunk. But the trunk in between these black sections are Ok looking. What should I do? Trim it to the bottom? Thanks! 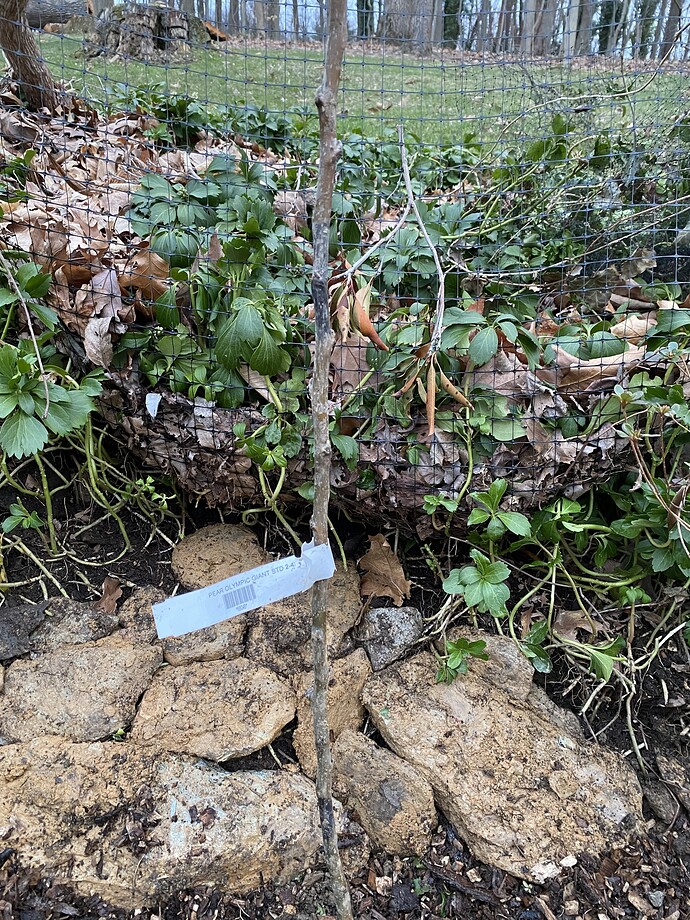 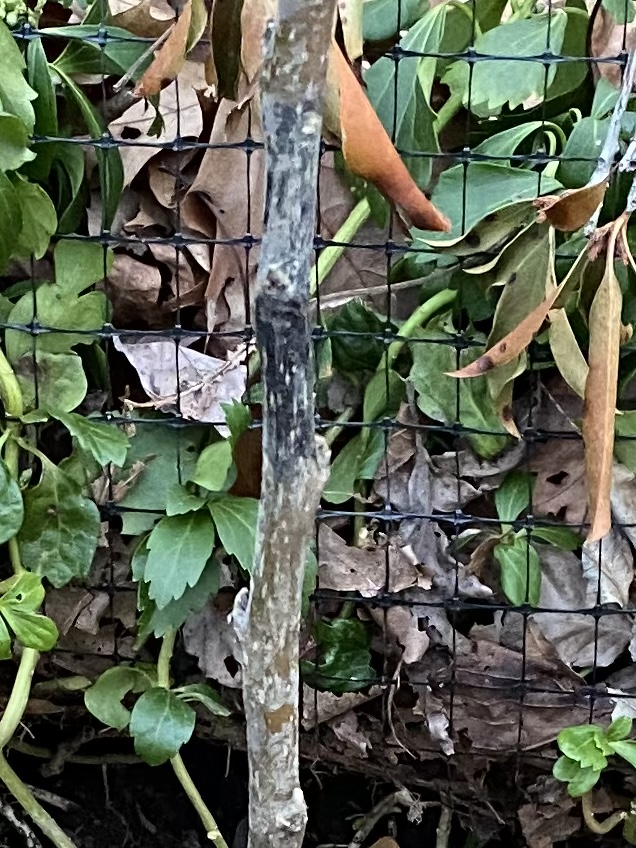 It almost looks like something was wrapped around it?

It sure looks like fireblight to me. Amputate is the only way I know to fix it. Would like to give other news. Got some from starks that were just like that and they died but I didn’t ask for a refund. In my area we really need trees to be on callery and I graft higher up.

My gurneys pear had fireblight within 6 inches of thee graft.

Get your money back.

I got a 2 in 1 Asian pear tree from gurneys as well over the winter. Is this black spot dead wood or fireblight?Thank you helping everyone.
Edit. It seems like it’s on all the tips of the smaller branches too. 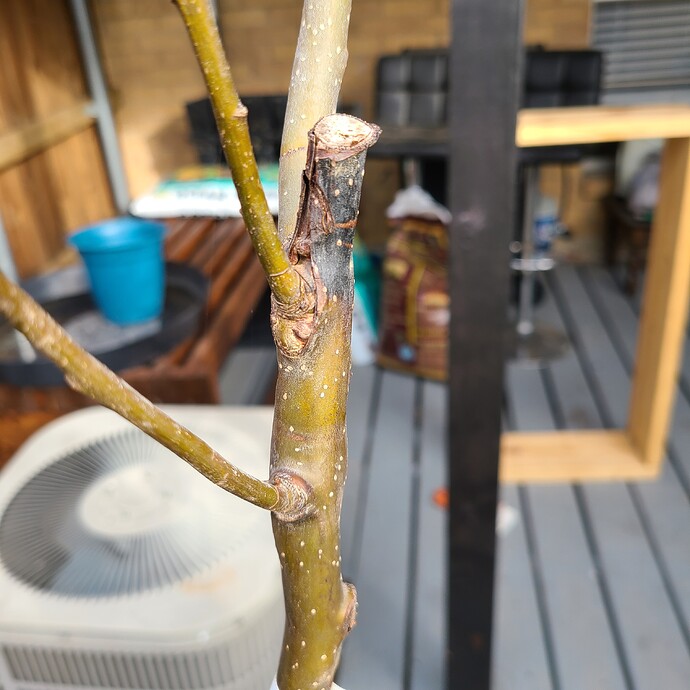 Gurneys can be really, really “hit or miss”. They carry a few hard-to-find and exclusive varieties, but the quality can range from “dead” to “amazing plant”. I think it falls more on whoever the actual grower is, but they seem to not really take much care in determining that quality plants are being shipped.

That just looks like too long of a stub left above the graft. Try to very carefully snip it off if you can do so without harming that upper graft.

Just report back. Thanks everyone for advice. I think @clarkinks is right, it definitely looks like fireblight, and the last fireblight section is about 6 inches above graft union. So I cut it down to about 2 buds above graft union, around 3 inches left. I tried to disinfect this pear tree as well as my dripping honey pear tree from Gourney’s with bleach and will spray copper some time later. The dripping honey pear tree was what I really wanted and it looks OK at this point.

I called Gourney’s this morning. To their credit, they refunded me the whole order (I have problems with other trees but not as dreadful as the pears).

They must be growing those pears in weird conditions. Korean Giant doesn’t get any fireblight in my yard. Hopefully it’ll regenerate from those few buds left. Great news that you got refunded! I only ever bought Drippin Honey from them, because it’s not available anywhere else.

Korean Giant has been the most fireblight susceptible Asian pear I’ve ever grown. I’ve lost it twice to FB. Regrafted it again last year. If it turns toes-up again, I won’t try it again.

Once again to me that blackened end looks like fireblight. Take it down to below the infection in my opinion. It appears when they pruned it the pruning cut likely got fireblight at that time. If you want to stop fireblight copper is best so spray them down before the tree wakes up. It may take 2 or 3 sprays but it will wipe the fireblight out. Those are not producing trees so no worries about to much copper. Fireblight is not active yet it’s still dormant those happened last year when the tree was still growing. Fireblight only attacks trees that have cells dividing and growing.

I will spray copper and may white wash the trunk with Bordeaux Mix paste. Thanks for the advice!

Thank you so much! I really appreciate the help. This post made me realize that I probably had the same problem.

l normally have a few strikes each year of FB on my Korean Giant. As of now I have just broken out the limbs and still have enough fruit. We like the taste of KG so as long as I can minimise the damage I will keep it. How does KG compare to Dripping honey with FB?

Gurney’s seems to be expensive for a mistake like that. With Gurney’s, Stark Bros, Fast Growing Trees, Nature Hill Nursery and Raintree I expect perfection on all of them because they are so expensive. Just shows the best options are not always the most expensive. 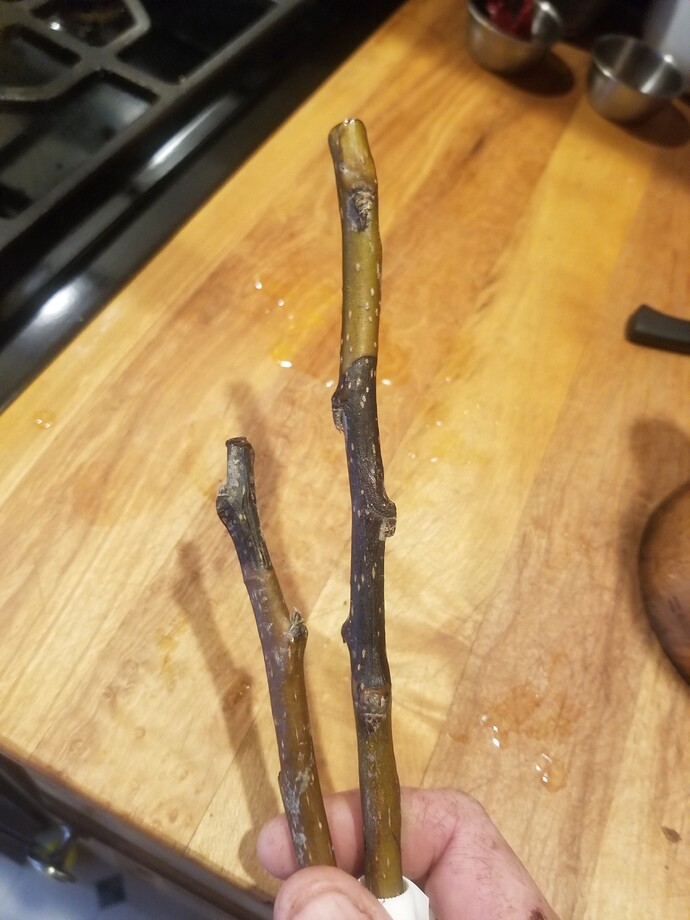 Ask for refund. But it’s still a loss.