Picked a few kosui pears today. They are very enjoyable to eat. These are sweet and refreshing. If your not growing it consider adding it your list today is August 21st. 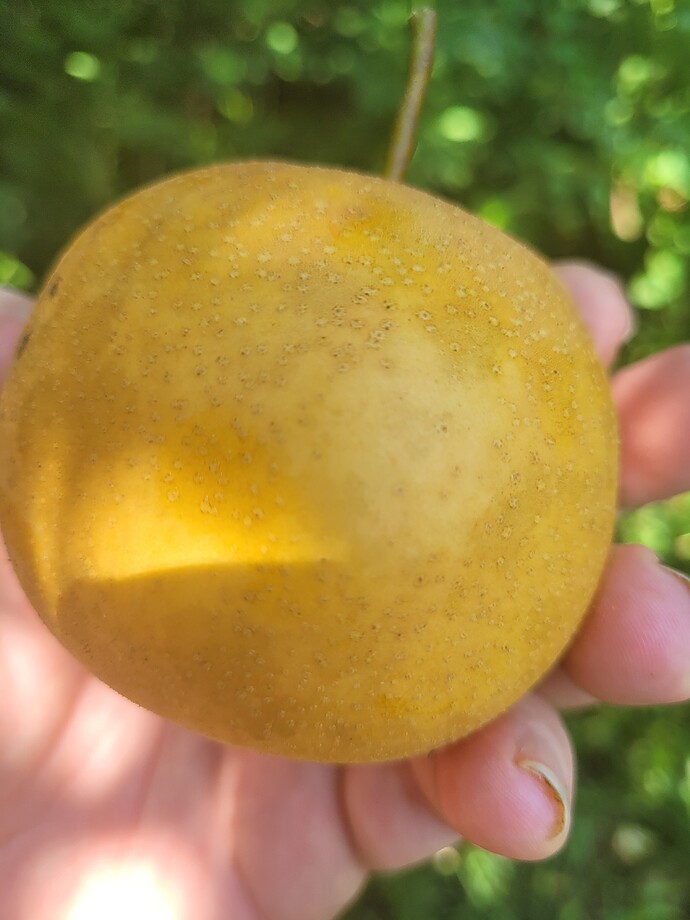 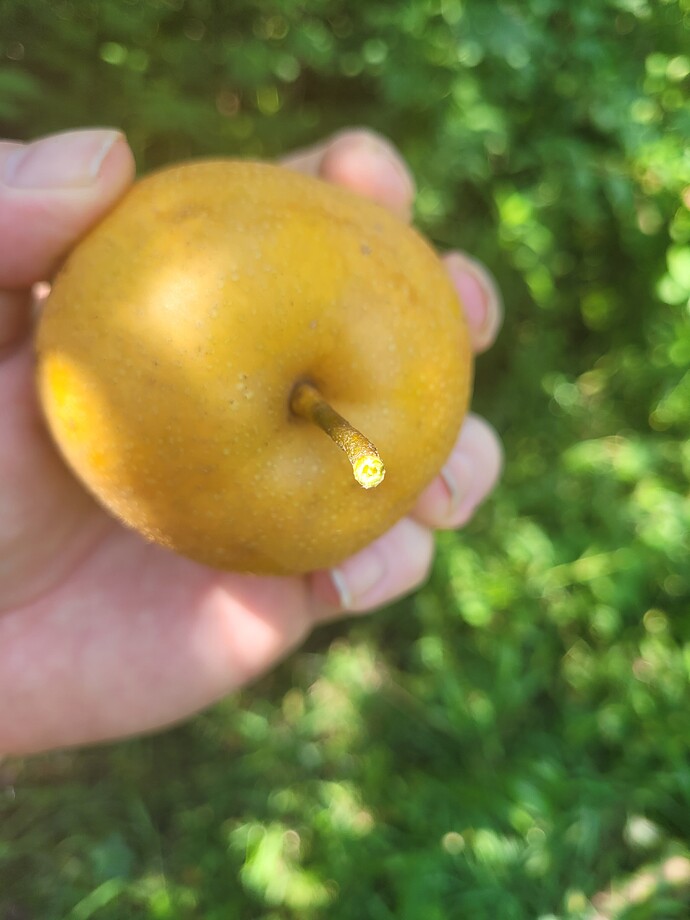 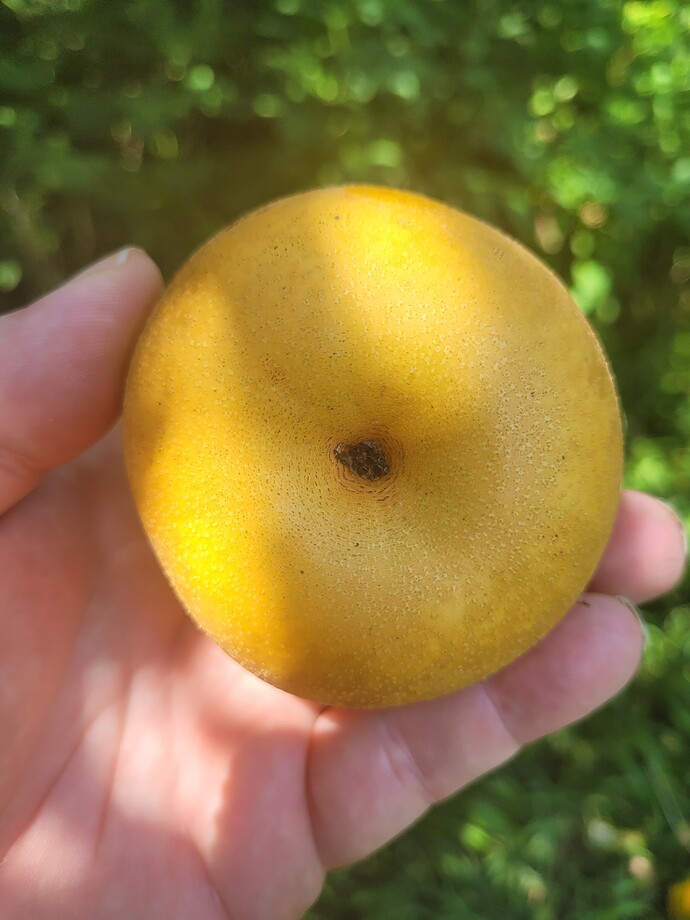 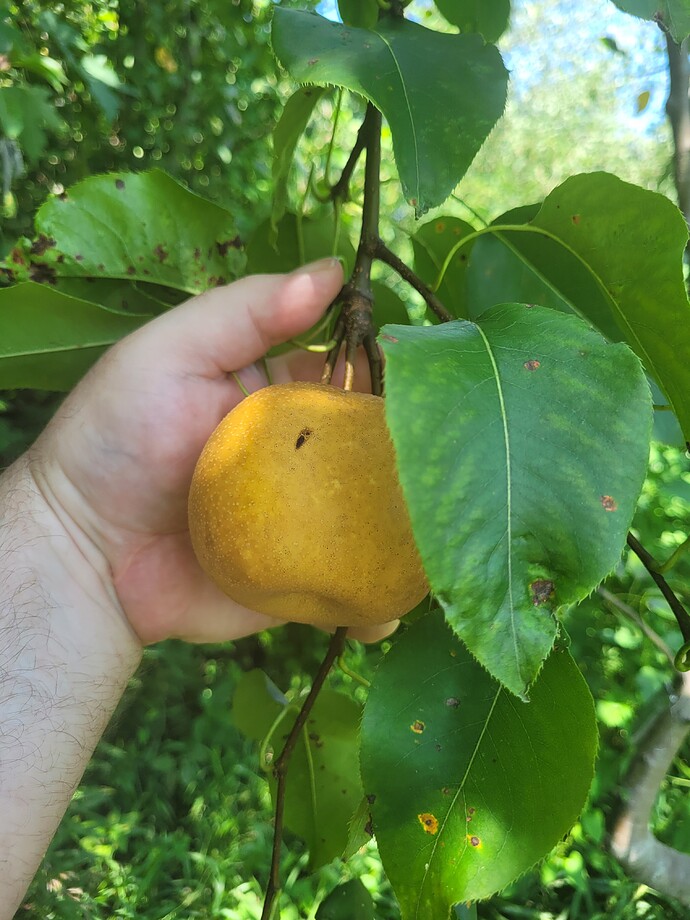 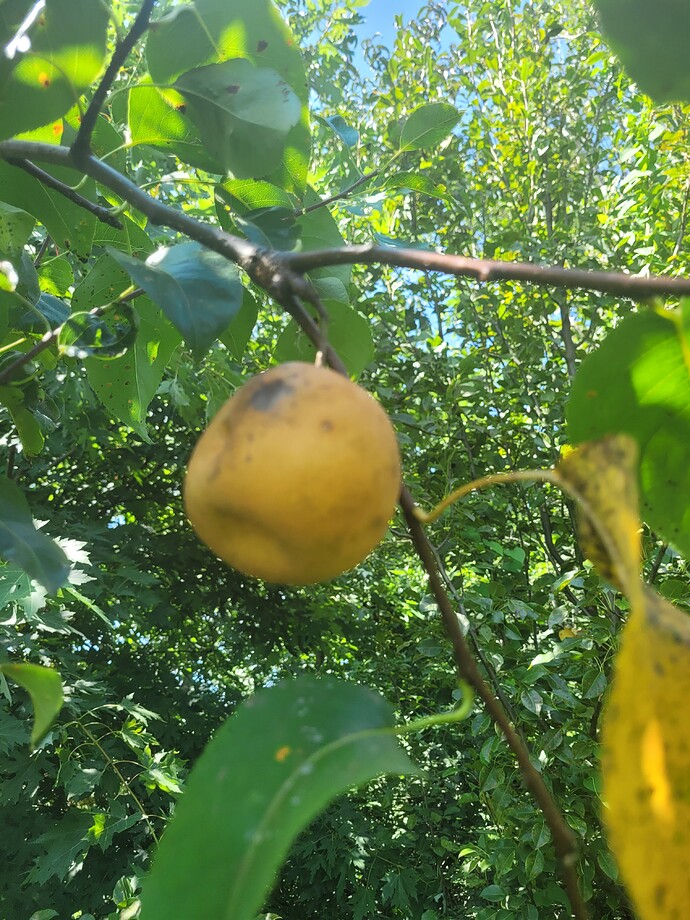 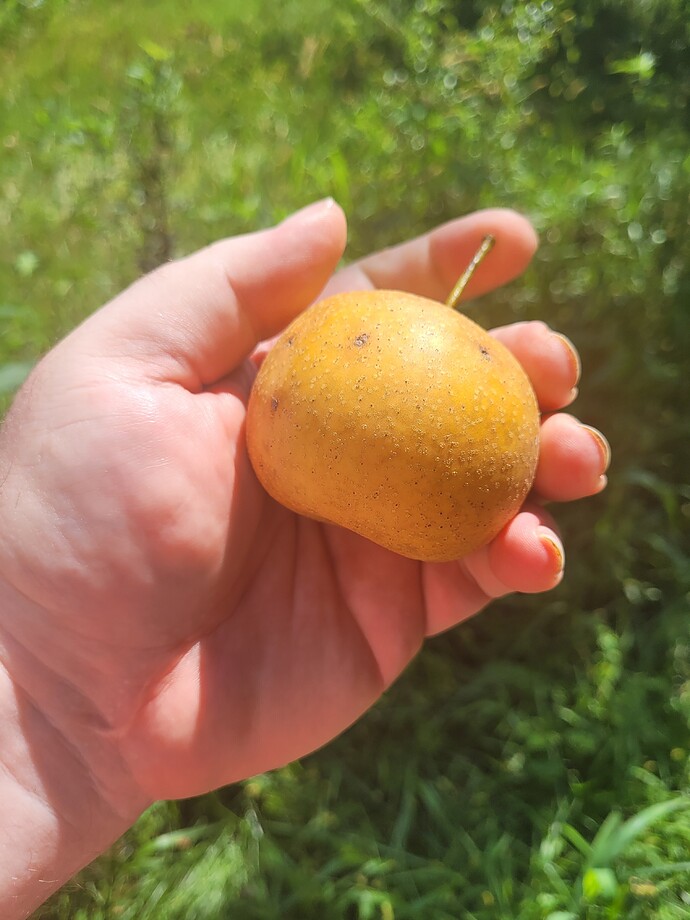 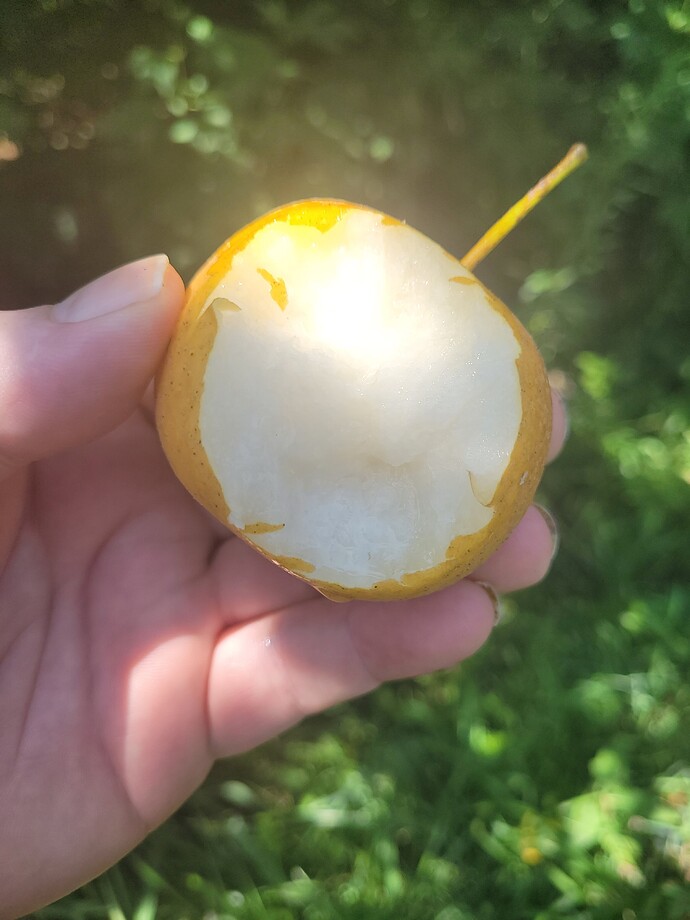 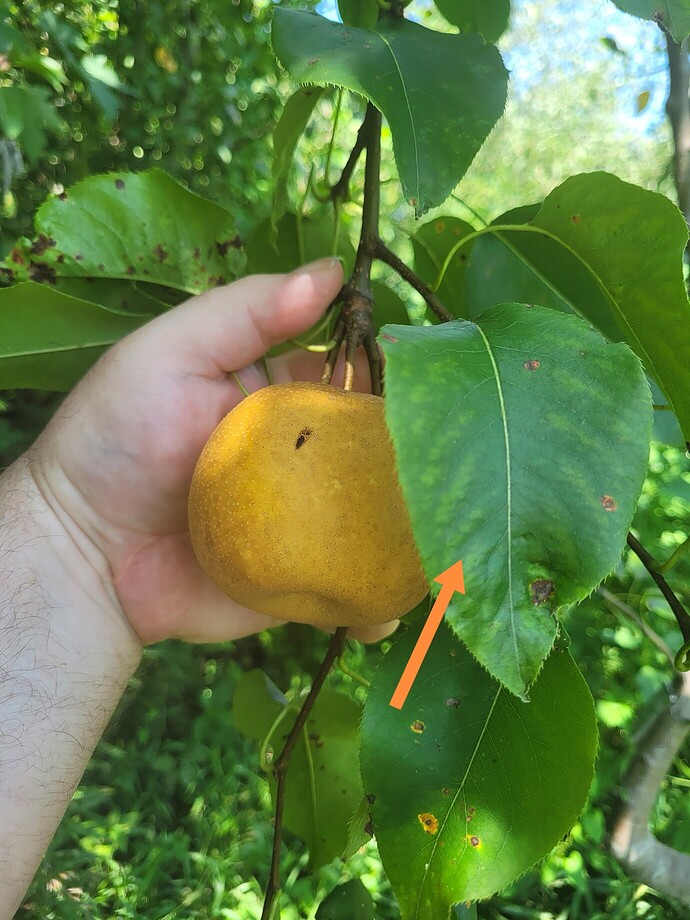 My thoughts are it is the nature of kosui but I’ve not grown it long enough to know that yet. The leaves are large and the tree is clearly very healthy. The fact our trees are very similar is a good indicator. Honey crisp apple leaves look very odd. That really bothered me at first with honeycrisp I used boron, magnesium and many other fertilizers to clear it up but the entire time it was the nature of that apple to have the same light and dark patches in the leaves. The most important question is what do you think about kosui? I like them very much! 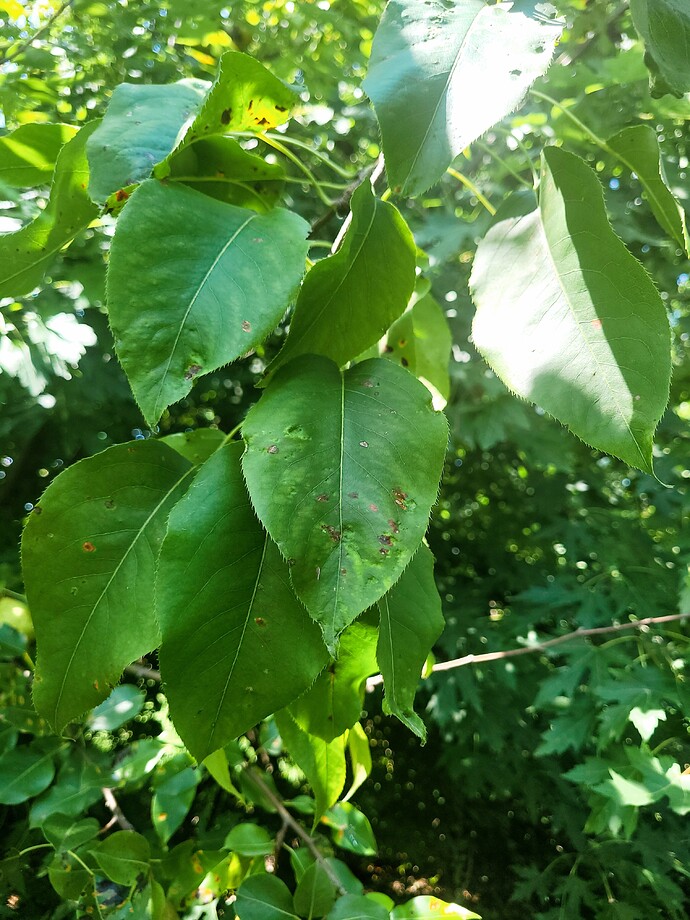 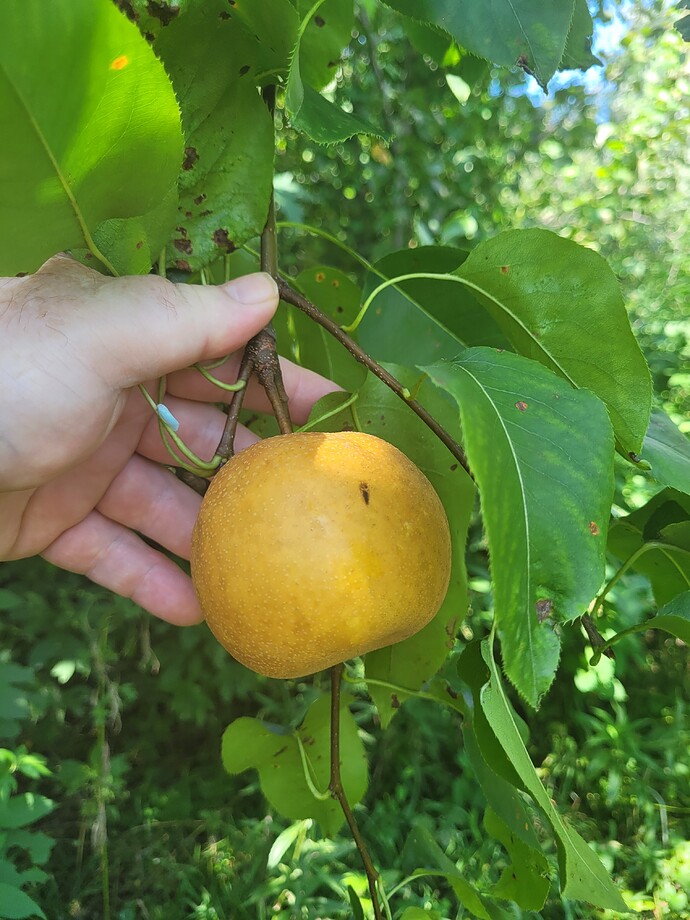 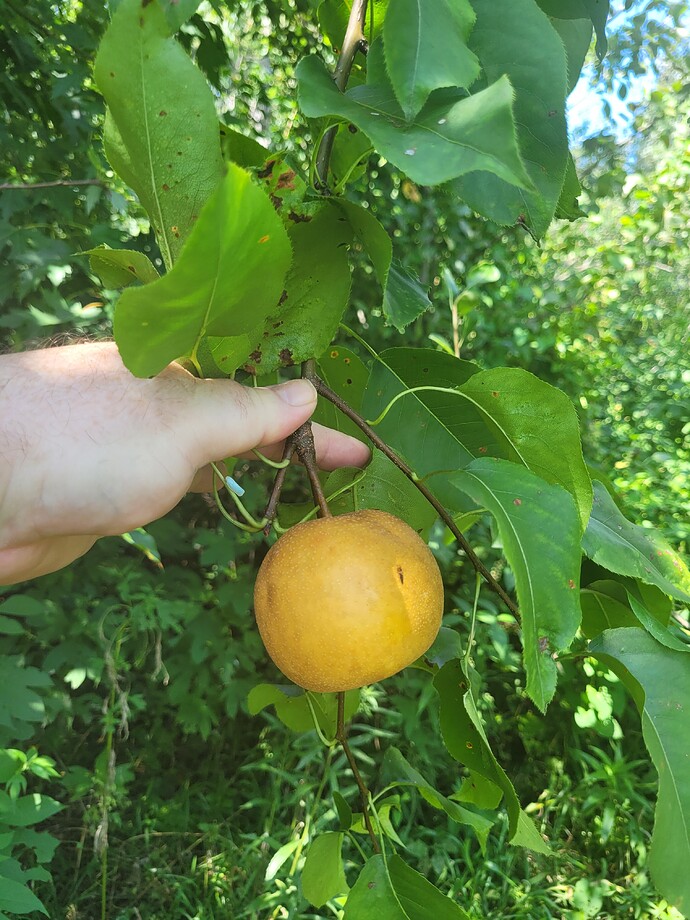 The most important question is what do you think about kosui?

Let me take a bite and I will tell you how I like it😜.
You made me wanting to add kosui next year😋

Is it earlier than shinseiki?

At my property this year its 2 weeks later than shinseiki. Pears can change year to year on when they ripen and frequently do at my location. It always surprises me when a pear ripens 2 weeks or a month later or earlier than normal. Kosui’s flavor i prefer to shinseiki so far. Shinseiki produced for me the first pears in 2019 i think which were terrible tasting. Then last year it seems all blooms were frozen. This year shinseiki was good and I see why people grow them. Kosui is very worthwhile growing. Kosui is not a commonly grown Asian pear yet.

Yesterday I posted my comments and pics in the Small Orchards…. thread about my Kosui.

Scott Smith commented that it is his favorite Asian Pear. He has an excellent taste

and I agree with him.

At least, my Kosui beats out Korean Giant as my best Asian pear.

I had to wait 4 more years because of those thieving squirrels.

At least, my Kosui beats out Korean Giant as my best Asian pear.

Tippy, I thought I got best taste Asian pears already. Now you tell me that I have missed one. This is agonizing! I want taste it and compare myself. I will look for scion this coming winter

Yes, Annie. You will have to taste it yourself. I think you will like it.

My graft is in a shady part of the tree. It has not grown much. If you don’t mind small scionwood, I could send it to you.

Funny how Kosui is not commonly grown here. It was everywhere when I visited Japan. It seems to be very popular there. How would you describe the taste and texture compared to say Korean Giant or Drippin Honey? Is the skin pleasant enough to eat? @clarkinks @mamuang
Some like Hosui have a very rough skin that I don’t find pleasant.

@PharmerDrewee the skin is not sand paper rough like hosui. The flavor is as @mamuang describes very good. It’s not a complex flavor more refreshing and light but still sweet. It’s a must have if you enjoy Asian pears. I’m not ready to get rid of Korean giant It’s still one of my favorites. Drippin honey is variable It’s very good when it’s good but when it’s off it’s way off. It’s so good most of the time I will always grow it. Most pears are like that you chase them at their best but are disappointed often. I do not think drippin honey reaches it’s best where there is any type of shade. Kosui was grown in heavy shade of other larger trees and tasted great. Clojuro is another I really like very much. Asian pears like chojuro with the complex butterscotch flavor are very hard to beat. I’ve tasted complex flavor in Korean giant as well but most years it ripens so late it never reaches that peak quality I’m looking for. Kosui is possibly in the same class as the best Asian pears. I’m going to need to grow it another year or two to know for sure.

My Kosui is also in shade but it does not compromise the fruit’s quality. Hosui is very sweet but I peel its skin. I still like KG very much.

@clarkinks Kosui sounds like something worth grafting. It’s quite an attractive piece of fruit. Have you tried Shinsui? It’s an excellent pear in my opinion. A coworker described the flavor as pear honey. I sense vanilla and some butterscotch too. I can smell the aroma when they are ripe on the tree. It’s not a very hard pear though, and is more juicy than crunchy when well ripened.

@PharmerDrewee
I’m not sure if what I tried was shinsui or shinko at a friend’s it was a small yellow pear. I will look around see if I have any grafted. My mother brought me some yellow Asian pears in this year she found 2 of I grafted to a tree that had fallen. We each ate one I told her my opinion was they were good. Thought they were pai li they are not those are not ripe yet.

Guess what I felt today on a kosui I picked yesterday? Yes that’s right the feel of light sandpaper skin once the pear had been brought inside and washed and towered off. It’s not as bad as hosui but something you should be aware of.

Thanks a lot. Will send you PM sometime in winter/spring

@clarkinks , I thought Korea Giant was a good Asian pear, and I do have Korean giant growing in my yard. I was content with the one Asian pear I have.

Now the Kosui pear you and @mamuang describing sounds so tempting, I feel like to have to have that.

By any chance, you will have some scion wood to spare this winter?

Japan here.
I like Kosui, mainly because it taste good when ripe and mainly because everyone grows it so it is on the cheaper side. usually get them from local markets.
I never really think about the skin because I have never seen anyone eats it together with the skin, it`s not suitable for eating (too woody to eat in my opinion). By the way, also true for other fruits, the taste varies depending on the planting condition.