After the grafting season was mostly over here (full leafing out), I decided to graft around 4-5 grafts of Moorpark apricot in Mid to late March. Most were around 4-5 inches and failed. Partly out of curiosity, I tried one around 20 inches long. It is actually the only one that survived.

Was this just coincidence? The rationale: I was worried about competing growth sucking up all the nutrients. The donor graft was from the top of a tree so I knew it had a lot of hormones in it (presumably). So I kept the whole thing, thinking I wanted it to be able to compete with the rest of the tree.

I did a very long whip with several tongue slips.

Is this a good way to do late season grafts? Or did I just get lucky? Funny that all my 4-6 inch grafts failed. 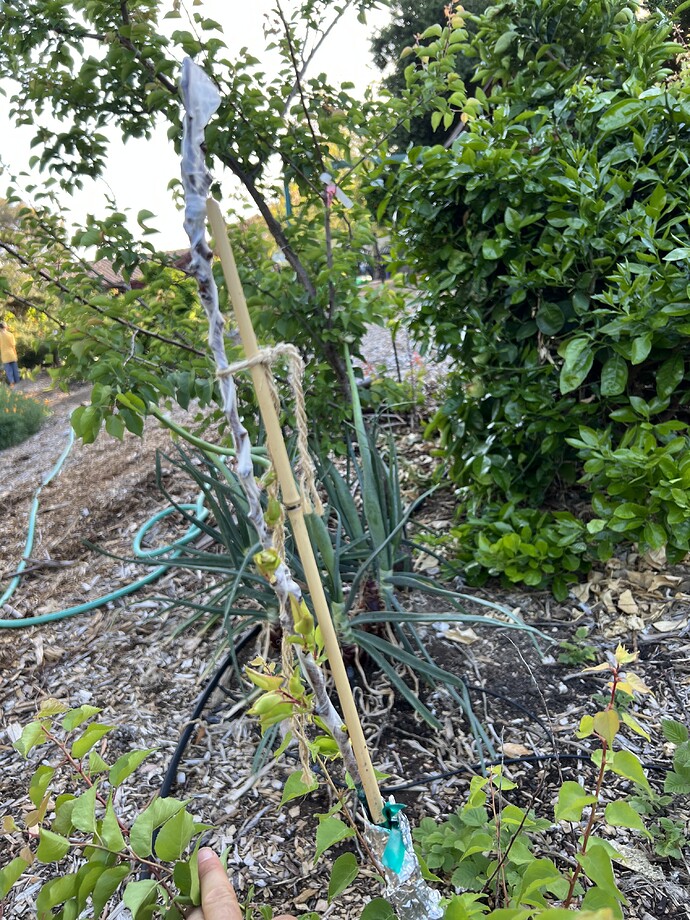 This is mostly speculation on my part, but I think having a larger stick would reduce the risk of it drying out. I think the bigger factor might be later season (although at your San Diego location you might not have the same chilly weather issues I have in New Hampshire!). But, back to stick length. My understanding of why shorter scion pieces are more typically used has more to do with economy than anything else. You really just need one bud for it to work, so your scion goes a lot farther if you use as little as possible for each graft. Now, I also feel like a longer stick has more resources (nutrients, water) and less surface area, so there is probably some marginal benefit to a larger stick within reason. However, I think that unless the graft conditions are sub-optimal (temp especially), then the difference in success rates will be negligible.

Again, this is wild speculation on my part, and I don’t have any readings or quality experiments to back it up. Not even any half a**ed experiments!

That fits with my experience. San Diego can get really dry. The smallest scions I have done have been the least successful.