I am trying to finish out my orchard so I have trees producing through out the season. In central Virginia we are usually frost free from mid-April through the middle of November. This is a pretty wide season. I have gaps at the end of the season, My latest peaches are Victoria and September Snow (Victoria is not producing yet and Sept Snow is on order). I consider late season to be Victoria and later. I have been looking at Fairtime and Carnival but prefer something with a higher chill hour if possible. Considered some of the late peaches from the PF series Below is what a local orchard grows and estimated production dates -

I can’t find anyone that sells Last Chance and September Sweet. PF Big George is never in stock at the nurseries that list it.

Can anyone share there experiences with late peaches and recommendations and where to buy?

I may have Last Chance scionwood next year, PM me in late January. No experience with the fruit yet.

I am new to grafting (never done it) but will definitely ping you. Thanks!

Arboreum sometimes offers Last Chance. That’s where we got ours.

I’ve heard rumors that Big Red is among the best peaches for the Deep South.

My Fairtime tree snapped in half (critters? wind damage?). I splinted and taped the wound. It is wilted and half-dead. I’ll be lucky if it survives at all.

ScottFSmith has Salway, but I know little about it, other than what he’s shared.

I have not yet tasted any of these.

In the past, I’ve sampled the Laurel peach from local orchards (their latest variety) and found them underwhelming.

I am also interested in late (and early) peaches and nectarines to extend the season, but I prefer low chill as a couple of years ago we got less than 400. I have Carnival and am looking for Fairtime or others in that time frame. Suggestions with sources appreciated, as would scion sources.
Has anyone had any experience with Ambrosia Peach? I got mine from a California orchardist named Edwards who developed and patented it about 20 years ago. It was a sweet and richly flavored late peach. I lost my tree a couple of years ago and have not been able to contact Edwards. I would love to get some scions. Ambrosia was a great name for it as it was nicely perfumed. Never had a peach that smelled that good and with a taste to match.

@Olpea and @alan know a lot about late peaches, so I’ll call them out.

Matt has mentioned my late peach standards, here they are in more or less ripening order: Rio Oso Gem (early Sept for me), Oldmixon, O’Henry (9/10), Late Crawford, Indian Free (9/20), Heath Cling, and Salwey. The last two are cooking peaches and I have also been looking at some other varieties to fill in for eating in the late period. I planted August Flame last year, but its listed as rot-prone and I regret planting it (I didn’t notice that fact until after I had the tree planted). It is fruiting this year with a couple peaches, will see how it does. I have been meaning to get Victoria, Alan was very positive on that one. All of the peaches I have above I like a lot, but O’Henry I probably would not plant again as it is very prone to spot damage and it also cracks every couple of years.

PS here is an thread from a few years ago on this topic:

This is 5 years out of date. If anyone can come up with a more current article please post a link. http://njaes.rutgers.edu/pubs/plantandpestadvisory/2010/fr083110.pdf

Scott when does Red Haven or Elberta produce for you? Not knowing your season makes it hard to relate to the dates you posted without some reference point.

Scott is in Balto. I’m 45 min drive west of him in Frederick.

Redhaven is the key marker peach here. It traditionally ripened on August 1st for years, but in recent years, has been coming in earlier (last week of July). Thanks, global climate change.

I believe the Adams County Nursery maturity chart from southern Pennsylvania is the closest approximation available for our area.

I’ve created my own estimation charts, re-jiggered as necessary, which I include below. These are my best guesses for ripening dates in the central Maryland mountains on the border of z6b and z7a. 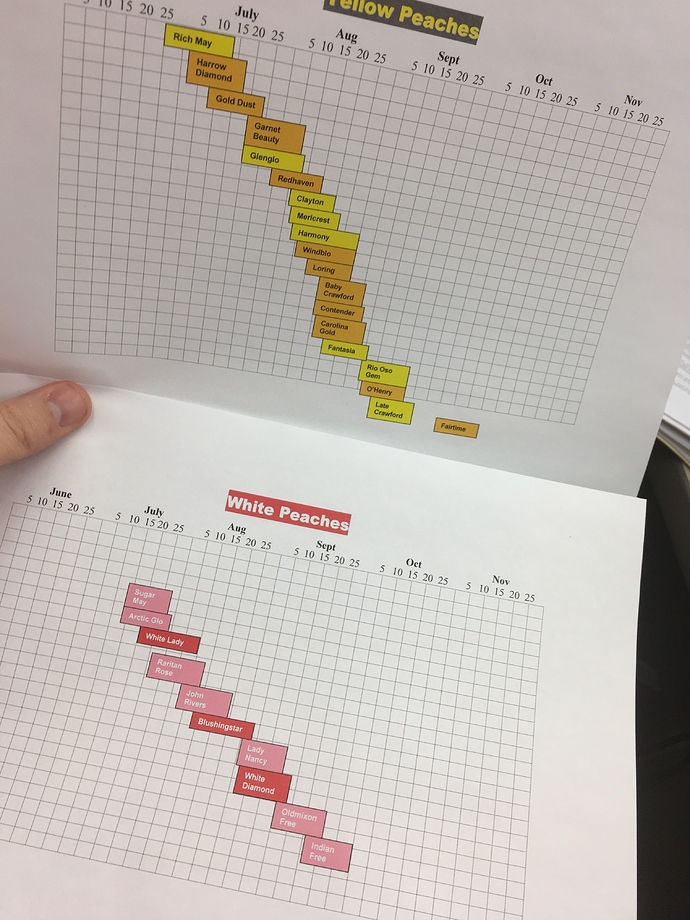 I believe you. Stuff on the seaboard and coastal plain should ripen ahead of the piedmont and mountains. And the impervious surfacing in Balto city generates the heat island effect.

You might consider adding Black Boy to the list. It’s similar to Indian Free in most respects - flavor, size, bloom and harvest times - but is self-fertile. As Indian Free requires a pollinator, they make a nice pair for the backyard orchardist. Hard to find, but Raintree offers it occasionally and has it available on Lovell right now.

I have been meaning to get Victoria, Alan was very positive on that one.

I am not comparing it to anything else in its season- it is the latest yellow I grow by over a week and gets up good brix- I would say it’s very good “for a late peach” but I’ve nothing to compare it to besides Heath Cling, which is a very unusual peach but not exactly my cup of tea- I tend to like yellows more than whites unless whites are high acid, like Indian Free. It is also a vigorous grower and apparently a reliable cropper. Plus, it has those beautiful big Loring type blossoms.

Any idea when Arboreum starts taking orders for next season?

Some of the late season peaches I grow or grown are in order of ripening:

Lady Nancy. A good white peach. Very large. It’s a bit of a shy producer, which probably has something to do with why it always produces large fruit. No bac. spot.

Encore- Very reliable producer. I have trouble getting sugar up on this one, but the flavor is pretty peachy.

O’Henry- Pretty much ripens with Encore here. Nice flavored peaches, but every since I planted about a dozen or so at the farm several years ago, their fruit has been knocked off by frosts. The one at the house has never been what I’d call I good producer, but produces OK most years. Part of the problem with the ones at the farm may be they are still a bit young. O’Henry does get bac. spot fairly badly at the farm and may result in their removal.

Laurol-This peach produces well for me in marginal years with good sugar and flavor for a late peach. I know this is in contradiction to Matt’s experience, but I really think a peach variety can differ in different climates and where the peaches are picked on the tree, or how much rain or heat is received the last month before harvest. As an example, we never pick inside picks for number one peaches. If it is too low in the canopy, or two much on the inside, or too small, we don’t sell those as number ones, instead sell them as seconds. I think we are about the only commercial nursery which does this, but it insures our customers who want number ones (what I call “fresh eating peaches”) get the best peaches we have.

The place where the peach is located so important on mature peach trees. It’s really more important than the variety in many cases. What I mean is that I could take just about the best variety we grow and pick peaches from low and inside and they wouldn’t hardly be fit to eat.

When I was at K-State, I took an ag course and the prof. repeatedly said (speaking of hogs) “there are just as much phenotyical differences within a breed, as there are between different breeds”. I have come to believe the same for peaches.

One disadvantage of Laurol is that it does have issues w/ bac. spot., but so far nothing that prevents the marketing of most of the fruit.

Victoria-Like Alan, I like the peach. No bac. spot. Good producer. Good flavor. It does tend to drop fruit if you don’t stay right on top of the picking. I’ve put in a few more of these every year for the last couple years.

Sweet Bagel-This was a very nice flavored yellow flesh donut, but the bac. spot was terrible for me. Removed.

Autumn Prince- Put in a couple of these trees this spring. They were 1/4" trees when I put them in, but one of them bloomed and still has a peach (doesn’t happen often). They are supposed to be very very late peaches. I wanted to see if they would ripen here. Too early to tell anything about bac. spot.

Redhaven ripens generally about the third week in July here. This year they were a week earlier for harvest (in spite of the fact that peaches bloomed three weeks earlier than normal - Mid and late season-peaches tend to want to drift to their normal ripening time despite how early or late the spring comes, in my experience). We picked the first Redhavens here yesterday.

By the way, I had an older man from the FSA in the orchard this morning and gave him a top peach off a Redhaven. He ate it and went on and on about how great it was. Said the best peach he’d ever eaten was a peach he picked off a tree in South Carolina and the peach I gave him was just as good. I did try a few Redhavens today and they were excellent. But, except for last night (in which it rained over an inch) we’ve had normal dry hot weather for a little while here, which produces the best peaches.

Our late peaches include Rio Oso Gem, Late Crawford ( which is 5 years old and has yet to set any fruit), Indian Free, Last Chance, Kaweah (only 2nd season and not bearing yet), and Halloween. We got the trees from Arboreum, Bay Laurel, and Peaceful Valley.

there are just as much phenotypical differences within a breed, as there are between different breeds

But the peaches are clones!

I also like Laurol, based on tasting low peaches on nursery trees. It also has beautiful blossoms which is nice for me and my clients who integrate fruit trees in their landscapes. In my orchard I have a very mature Encore which provides more fruit than I can use in Laurol’s season, but I should probably test Laurol in a prime location to see how good it can be. Usually Encore gets good flavor here as early Sept tends toward warm and dry. By mid-Sept they are ripe.