Apologies if this has been covered before, but I seeking very late ripening apples in my Zone 8a in Georgia. I’m thinking ripening late October or early November at the least in my zone.

Does anyone have any favorites they recommend?

Zone 7b Alabama. I just picked my small crop of Pink Lady apples. They are one of my favorites.

I’m interested in this thread. I think yates would ripen late for us but i cannot vouch for its quality. I’m in East central AL. I still have a few goldrush hanging and starting to blush a little. My GR have been intensely and awesome flavored. Ark black is pretty late too I have a couple still hanging getting very dark. Flavor has been mediocre at best. I will store a few long term and see if they improve. Sundowner and lady williams are very late but may get hammered with fireblight. They are sibling and parent of pink lady which is reportedly very susceptible.

Yates apple is perfect for your situation. It is the classic late-ripening disease-resistant Southern apple. They have a nice fruity flavor when eaten fresh-- like mild grape juice and apple juice mixed together. Hard texture-- nice when sliced for the table. Said to make good cider too.

If you wanted Yates, you could easily find scionwood.

If you wanted instant gratification-- Century Farm is literally selling Yates trees right now. They have dwarf trees on B.9, and bigger trees on MM.111 rootstocks for sale right now. They also have lots of other Southern heirlooms.

A really good value for a larger Yates tree is at Ison’s. They have good size trees, usually put on M.111 understock; call to confirm. 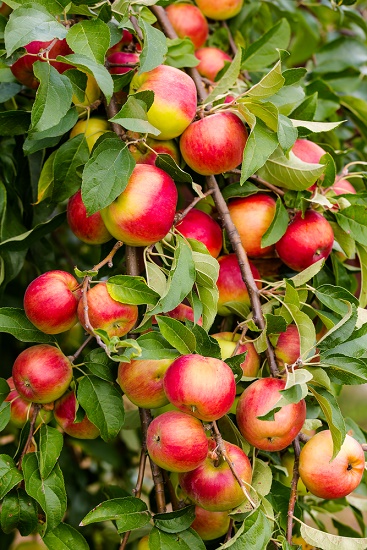 The Yates apple tree is a pollinator that produces small red apples with firm, dotted skin. This tree is very easy to grow and a favorite for wildlife.

Sounds great. How is yates in terms of sugar vs acid? I think I will top work Priscilla with it this winter.

They have a nice fruity flavor when eaten fresh-- like mild grape juice and apple juice mixed together. Hard texture-- nice when sliced for the table. Said to make good cider too.

To further answer your question:

Yates apples are more sweet and fruity flavored, rather than tart. At least the ones I tasted @scottfsmith’s gave me this impression. They have some acid, but on the low side.

I was considering Yates. I just heard mixed reviews about the taste. But I have been wanting to try more Southern heirlooms.

I recently visited a few north georgia orchards. I asked about yates, which were not ripe yet. One orchard said it was an old fashioned sour apple more for cooking. The other said it was sweet and crisp - similar to crimson crisp. Given how under ripe the first guy was selling his apples, I’m going with the second guys description. Second guy said never pick yates until well after the first frost.

Yates according to my taste has always been a mild sweet apple. I wonder if he is getting it mixed up with another old apple that is sour (Horse apple).

Enterprise, Stayman, Virginia Beauty, and Hall are others to consider. I have those planted but haven’t gotten fruit yet or tasted any of them, so this is just based on what I’ve read. I also planted Yates and Arkansas Black at the same time. Yates and Virginia Beauty are both supposed to be good pollen sources too.

Thank you. I have been looking at Winesap/Stayman Winesap. Very encouraged by the good reviews of its taste for eating and cooking.

Two others I’m considering are Hauer Pippin and Allen’s Everlasting. Has anyone grown or heard of those?

I vote for second guy

My Yates are still not ready to pick. I had one a few days ago, it was good but still starchy.

We grow the Hauer, near where it originated. It still won’t be ready to pick for 2 or 3 weeks, but then it will keep all winter. You need a long growing season. It is not the most intensely flavored apple, but it improves in storage and is better than any other fresh apple in March!

Michelin and yates hold apples over a long period of time.

Thank you! That’s another vote for Yates. It’s moving onto my shortlist.

Michelin is a cider apple, correct? I’m not quite ready to be planting cider apples yet, but that is good to know.

Thank you! I will definitely look at Hauer Pippin then, because here in recent years you do not have to worry about frost until mid to late November.

Pink Lady is quite late for us here but often gets scab. Gold Rush is one of the last ripening. Northern Spy is late too. Sturmer Pippin too.
JOhn S
PDX OR
z8-9

Thank you! I do have a Gold Rush but otherwise my climate might be a bit different than yours. I have heard that Northern Spy will taste terrible ripening in the South or I would definitey want to try that one!!