Last year was our first large honeyberry crop. Trying to pick the leaves out of them was very tedious, so we tried blowing some with an electric leaf blower. It blew everything away, leaves and berries! Has anyone tried a leaf blower they can recommend? I see that Bernis at Honeyberry USA put her berries in a rectangular tub to blow them, which we didn’t try; we just poured them. I prefer a battery-op tool to use in the orchard. We have 20- and 40-watt Ryobi batteries and 20-watt Worx batteries for other tools, so would prefer those brands. The less CFM the better, I would assume.

Have you tried just moving your setup further away from the leaf blower? The force should drop as you get farther away (or off to the side slightly) and there may be an optimal distance that moves the lighter leaves but not the heavier berries. Would save you some money from having to get another blower.

We tried holding the electric one farther from the berries, but it was awkward, requiring two people. I want to be able to blow them shortly after picking, rather than at the end of the day after returning home from the orchard, by which time they are wet and sticky in the ice chest. There is only a generator for electricity at the orchard, so a battery-op blower would be much more convenient.

I saw this on method on Honeyberry USA’s YouTube channel.Is that the one that Bernis was using?A smaller version could probably be made. 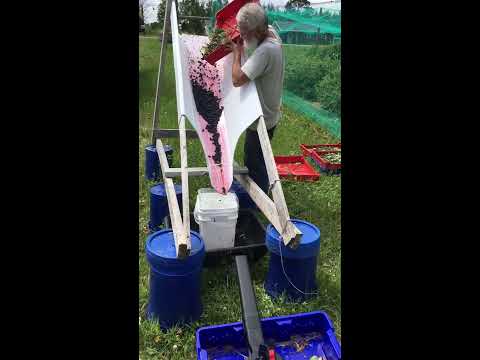 I’ve never tried this so I’m not sure how well it would work or if it would overload the blower, but you could try mating an air diffuser to the end of the nozzle with flex cuff and hose clamps. I think most blower nozzles are in the 4 inch range so these could work:

I had seen that Chute-n-go video. Looks like overkill for what I need. The air diffuser is an interesting idea I may look into. Thanks to both of you for the suggestions.

What about the Sawzall + pvc pipe method?

What's the verdict on Honeyberries...are they tasty? General Fruit Growing

The collection is coming to an end and I managed more than three hundred shrubs with this tool: [20210619_070742] I’m still waiting for Aurora to ripen. The harvest was very good than expected and I haven’t had such a season in a long time. Here’s how to collect it: [Zber plodov Kamčatskej čučoriedky - Hascap - Honeyberry]

I found 2 kiddie pools that were set for garbage day this past fall. After a good bleach and pressure washing they’ll be great for berry harvesting!