We just opened a bag of Liberties that we picked on September 08 last fall. They went directly into bread bags, sealed up tight with a twist tie, and held at about 33 F all winter.

They’ve lost most of the texture and become mealy and they’re not nearly as sharp as they were, but they’re still firm and there’s no wrinkling of the skin. They still taste really good. Quite a few of them are browning from the core, and a few are splitting. But quite a few aren’t! I’ve still got three bags of those and one bag of Prairie Spy and that’s it for this harvest. 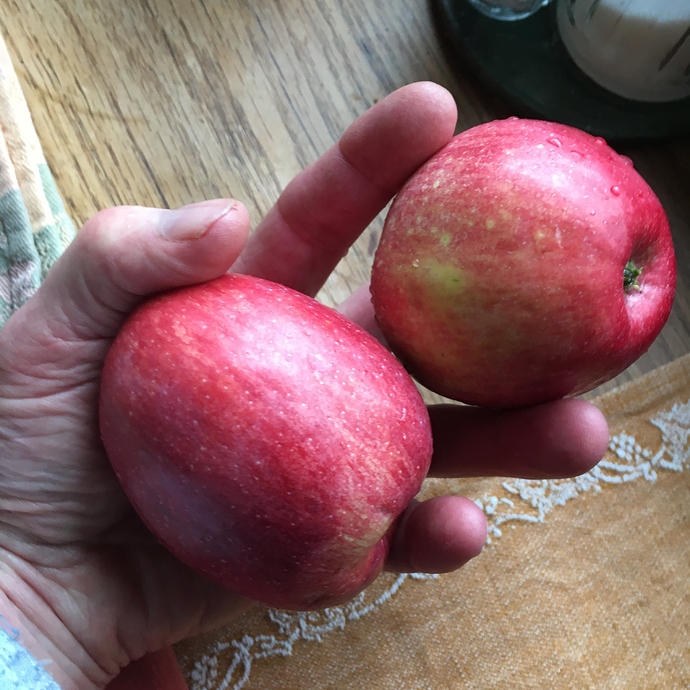 For a moment I thought you picked them September 2008!

Yow! Next time I’ll format the date differently. Thanks for putting your editor’s eye to work for me.

is your Lib awake yet? my tree is awash with blooms now, but we had a 26 degree freeze last night. the blooms look okay, but still early to say for sure.

That’s great to hear! My Liberty bloomed recently, but we had a spike in temps up to 96 degrees in my backyard. They’re looking a bit odd. I’m thinking the heat might have ruined most of them.

i’m surprised you can get apples to grow in your area, i suppose it’s better than south texas. are your blackberries blooming or setting fruit yet?

Just starting to push buds. And I am glad it isn’t blooming, with the weather that’s hitting right now. We’re projected to drop into the teens tonight and tomorrow night. Dernit.

Yeah, I saw the forecast for y’all, looks like winter is not going away anytime soon. Last week I thought we might be in the clear as far as deep freezes were concerned, but that was presumptuous and probably a bit naive. It wasn’t supposed to get below 32 last night, but what can you do. Our last avg freeze is April 18th, so I shouldn’t be too surprised. Next week we’re supposed to be near freezing a couple of days.

The good news is today is in the mid 60s and sunny, and I just got my tractor fixed, so now I can get out there and do some bush hogging and plowing.

That’s awesome! Where do you store, a fridge?

Somewhere there’s threads on that, but I didn’t find those. Here’s this one though, should answer your question:

Time to start bringing them in General Fruit Growing

I harvested about fifty pounds of Liberties today - [DSC_0090] and tomorrow I have to start giving away many of these: [DSC_0092] and then I had better get on these (prune on tomentosa root, eleven year old tree): [DSC_0093] Much of the plum crop will be eaten right away, with some preserves for the year. We don’t try to put up plums- they just pale in comparison to the fresh. The Liberties look good- very few bird pecks, just a couple of codling moth stings, but very broad range of sizes…

Thanks I’ll check that out. Side note, I grew up on Hull Road in Sandusky, MI.

I don’t know Hull Road, but it’s entirely possible that there’s some connection. I gather that Hulls settled in Ohio shortly after the Revolutionary war. ( A lot of the family history seems somewhat muddled -and some of it a little inflated.) But General William Hull, who surrendered Detroit, was said to be a colateral descendant, so maybe he had a road named after himself -who knows?

I could see that. The city is a couple hours north of Detroit.

It got to 80 here and mine started blooming and then next week it dropped to 20 two nights in a row. Poor guys don’t whether they.re coming or going. Not going to let the ones I planted last year produce anyway, but 20 is just too cold to protect against for me.