Limb spreaders, what not to do

Sometimes life tells you have a lot to learn in a heartbreaking fashion. I was pruning today, and decided to place a limb spreader between a couple branches on my Kidd’s Orange Red. I tried too hard to spread the limbs, and CRACK! I split out the side branch.

Here is the carnage: 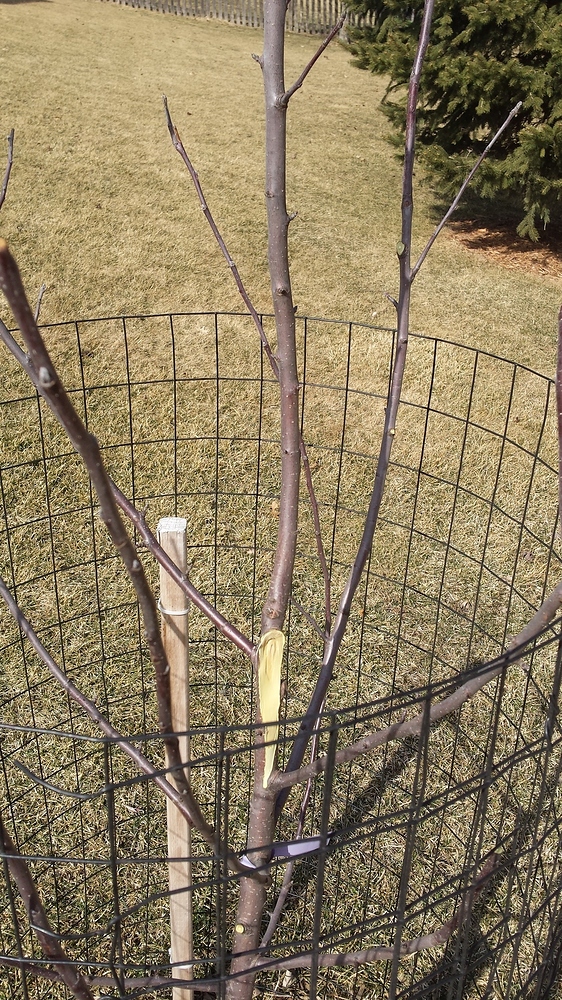 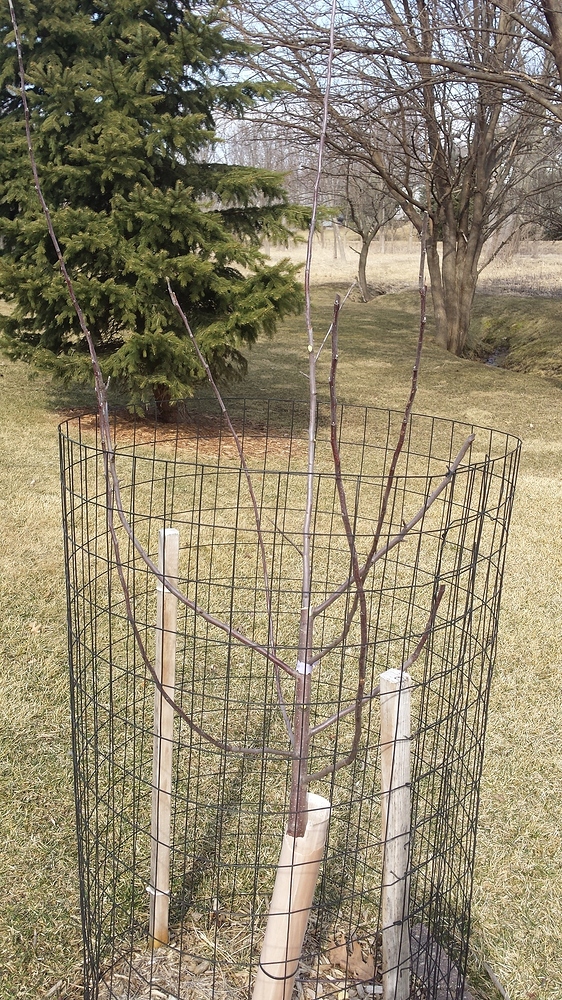 It is a hard lesson to learn, especially since this is the tree’s 3rd year and I was expecting fruit on this tree. I bet I lost 2/3 of the spurs on this tree.

Does anyone think there is any sense of trying to re-establish a leader with a cleft graft in the next month as its growth get’s going? I have issues with deer, and think the only way I can have much luck will be to get most of the growth above their heads.

From the first picture it still looks like you have a central leader. You do need to do something with those long spindly limbs that you have tucked inside the cage, looks like that one limb is already taller than the central leader.

Unfortunately, the branch that had the split was the central leader. My pics aren’t the best. The split was pretty bad so I cut it back to below the split. The tree has an open center now.

I would take suggestions on how to prune the spindly stuff. If I head them back I am worried that they will get hit pretty hard by the deer as they put on new growth. I might have to enlarge the deer “cage”.

This is one of the problems when one tries to make use of a branch with an excessive diameter, but the damage to the ultimate fate of the tree and speed to first harvest from your injury is very minor. Choose another branch to be a central leader and either tape a straight piece of wood or metal to the trunk or use a stake to use as a sort of splint to train your new leader vertical and remove the trunk above it (actually, you can do that first).

I suggest next time you bite the bullet and remove the excessively vigorous branch- certainly anything over half the diameter of the trunk instead of trying to keep it.

If this is too hard for you, and you prefer to learn later why leaving oversized branches is a bad idea, you can make a hinge on an oversized branch before trying to spread it.

I’m being ironical, of course, as you might be able to make use of such branches if you are diligent at reducing it during the growing season, but over the years I’ve come to the conclusion that removal is the best option for me.

This is an old post but I had a case where a branch at the top of the tree partially broke off during overzealous spreading. I pruned the branch back to a 1/4" stump and fixed it back in its original position with grafting tape. My thinking was that this repair was basically like bud grafting and is preferable to an open wound. Did I make the right decision?

You will know next spring.
Each break is different and consequently each will heal differently.

The summer before last I “overbent” a pear branch tryng to tie it to the espalier wire. It was a pretty clean crack do I immediately re-set it at almost the angle I originally wanted and, without pruning it off, I bent a piece of metal into a splint, wrapped it and prayed. It worked perfectly.

I guess that depending on when in the growing season the break occurs, the extent and type of break and how well one is able to “put it back together” will decide the outcome.

So basically, if there is no replacement branch available, try to fix it. The worst that can happen is that you will find out very very soon if it worked.

We have nothing to lose.

So the branch split away from the trunk and you pulled the bark back close the the trunk to close the split? I would have used vinyl electric tape for that to get it tight enough to push the bark against the wood as firmly as possible. If the wood can be pulled to its original position, the wound can heal good as new very quickly, but it should heal fine in any case if enough bark is intact to feed the bud that leads to a replacement branch.

Not a big deal anyway. With apples and pears you can generally grow branches where you need them by notching, if the tree doesn’t automatically generate a new shoot near the injury.

As usual you said much more succintly than I did.