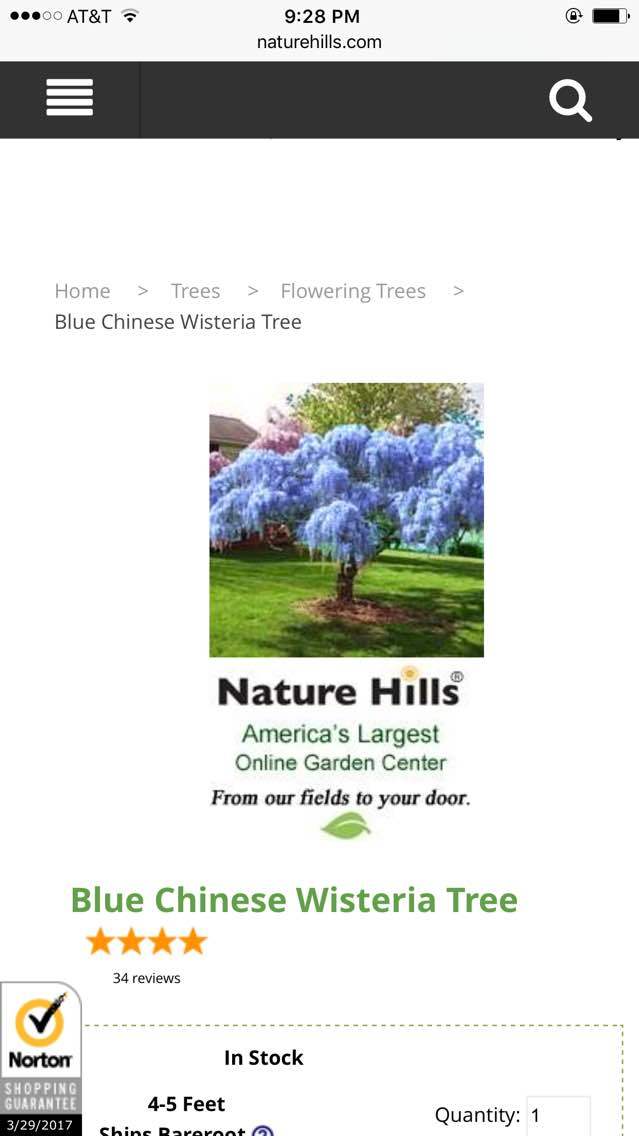 Given that a cultivar name wasn’t given, I’d be suspicious of Nature Hills claims.

Meconopsis is the gold (blue) standard in blue plants. Problem is they don’t like hot temperatures

Also, the rules for these plant is that you do not let it bloom the first year. I broke the rule with my first one and never saw it again. I was more careful with my second one, hopefully this year I’ll see a bloom if it returns

I asked my wife who had a lot of experience with wisterias and she says that no wisteria is completely blue, it always has a pinkish/purplish hue to it. Also, she says that naturehills nursery is not trustworthy, they over-claim their stock while in reality what they send is a tiny puny stick with a little chance of survival.

For your own sake and especially for that of your poor unsuspecting neighbors, I strongly advise not adding Chinese Wisteria to your yard. You and your neighbors will regret it much sooner than you might think. That stuff once it really gets going will shoot out rhizomes 20 to 30 feet a year in every direction and pop up all over your yard. They will shoot up into your trees as much as 30 feet a year and start strangling your trees. Once you have it, you will be pulling it out of all your trees and shrubs ten times a year every year, and I promise you that you will not ever get rid of it or really control it.

It is pretty. It’s a great nitrogen fixer which is one reason why I have such great soil at my house here in S. Georgia. But about the only thing that I can think of around here that’s more invasive is kudzu. Not only will you be fighting rhizomes, but the seeds will spread everywhere too. Your neighbors will absolutely hate you if you bring that noxious weed to their yard. And if you bring it anywhere near them, you are indeed bringing it to their yard. God bless.

I have the smaller, native form in a cultivar called “Blue Moon”. I haven’t seen mine bloom yet, but I’d be happy to send you cuttings or even a rooted plant. I transplanted it and the roots that I left behind grew more

But the pics on the web don’t show true blue for “Blue Moon”. Look it up and see if you’d like it.

I’ve grown a similar purple one called “Amethyst Falls” for years, and it’s quite manageable. I wouldn’t plant Asian types, either! I have enough crazy, wild vines attacking as it is (lots of birds here)