Looking for ideas on what to plant

I am looking for a ground cover that will fill in large areas quickly with little irrigation.

At this point there is little to nothing there but bare beach sand, highly inorganic, little water retention. AKA Candler sand Official Series Description - CANDLER Series

I would prefer something only a few feet tall max but am open to anything.

The problem area I am referring to is fairly steeply sloped and there is no chance of mowing it.

Something native something that dosent threaten the environment around me would be ideal.

I am located just NW of Ocala Florida. We experience temps sometimes in the low 20s during wintertime and it can be blistering hot with very little rain in the spring until our rainy season hopefully kicks in.

I considered something such as Muhle grass but have found it to cause my allergies to flare up.

I have endless amount of Cogan grass/johnson grass avail free for the taking along roadsides, in fields ect that I could transplant and water in easy enough but Id like to hear other ideas.

Perhaps southern wax myrtle Morella cerifera? Your site sounds custom-built for the plant. Smells great, too, and you can use the leaves to season things (kinda like bay leaves, but different flavor).
https://www.wildflower.org/plants/result.php?id_plant=moce2

Yaupon holly Ilex vomitoria would probably also do well, and you can make an excellent, caffeine-containing tea that can be on par with a decent Camelia tea (certainly at least as good as most of what’s on supermarket shelves).
https://www.wildflower.org/plants/result.php?id_plant=ILVO

Of the two, wax myrtle will probably spread the best on its own, as it suckers profusely. The holly would require a bunch of plug trays to propagate seeds and/or cuttings. It also looks like you could get a boatload of wiregrass and pine for cheap from your state nursery if you want to go that route:

maybe a combo of what Jay is suggesting and some low growing, fast spreading cacti . creeping sedum grows in poor dry soil. i have it growing on a gravelly bank here but we dont get the temps you do. could also try amending the sand and see what mother nature plants there for you then.

sometimes just adding a little organic matter is all it would take to get something to seed there . mother nature always finds a way.

There’s a thread somewhere about selected varieties of opuntia (does spread aggresively, so maybe not what you’re looking for) that has the taste of strawberries.

You could also try "back-to-eden"ing it by piling 2 feet of wood chips on top. Someone had success doing this in Arizona on what is probably worse or equally bad soil. Chipdrop will dump for free as will many tree services.

Maybe one of the native lespedezas would be good to have in the mix?

Florida Association of Native Nurseries (link is to a map of native plant communities in Florida): 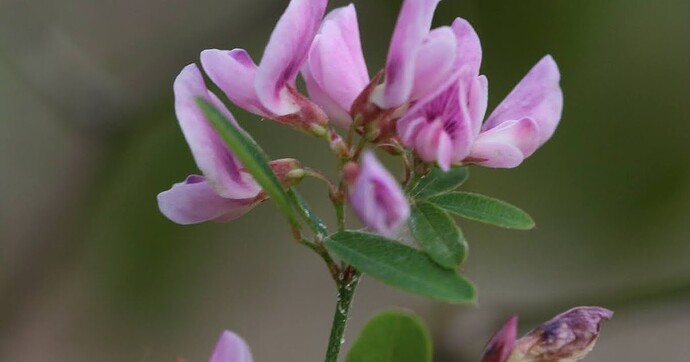 Tall bush clover ( Lespedeza stuevei ) is a perennial legume found in most counties in north Florida. It also has been reported from most st...

i have no practical experiance with your climate and such sandy soil.

I would however try and plant a combo of a Nitrogen fixer and somthing that produces a lot of biosmass. The Nfixer obviously for the N. And the biomas to get more organic material in your soil.

If you can source enough mulch, i think mulching that hill will also help a lot.

Trifolium subterraneum, the subterranean clover (often shortened to sub clover), subterranean trefoil, is a species of clover native to northwestern Europe, from Ireland east to Belgium. The plant's name comes from its underground seed development (geocarpy), a characteristic not possessed by other clovers. It can thrive in poor-quality soil where other clovers cannot survive, and is grown commercially for animal fodder. There are three distinct subspecies used in agriculture, each with its ow...

I think i got some seeds of it to try out. So might know more about it after this growing season.

Thanks for the suggestions, I was on the chip drop list a long time and never saw any chips, Im pretty far off the beaten path. I do not have the chips to spare and amend the soil.

Ill google the suggestions above. I appreciate the time

Super expensive, no seed avail. that I am aware of, only rhizome

Yes ,
may be expensive.
Could start a smaller patch and spread it around .?

I have lespedeza on a steep slope and it seems almost impossible to kill. It would be tall for a ground cover but prolific and colorful when it blooms. I dug up one plant I sowed from seed and the roots were unbelievable after just one year.

All good suggestions, Im especially interested in the lespedeza because it would appear to be a legume and so Im assuming its a miner plant with deep roots.

Sericea lespedeza Is a tall 3ft perennial, deep rooted , nitrogen fixer , very aggressive, would be a bad choice for a yard.
I dont like it here.
I do have some prostrate annual types Of lespedeza that are nice ground covers late summer . They are annual here in WV.
Not sure how they would behave in Fl.

That perennial peanut I mentioned , I understand they sell sections of “sod “of it. While that would be really expensive .
Could buy “one “ section of sod , cut / tear it up to separate the rhizomes and plant several ft apart to fill in in time ?
Have you seen the peanut sod ? Looks wonderful !
Bermuda grass and Saint Augustine’s grass or other options for your area

I forgot to mention that wax myrtle is a nitrogen fixer, too! They use a different family of bacteria then legumes. They also grow on straight up beach sand dunes. Super tough plants. The only downside is they tend to compete poorly on good sites. However, on poor sandy sites they do so much better than most things that it’s not a problem.

Agree, it is aggressive.

I have looked into and priced perennial peanut, for this area and the suppliers I could find it was very cost prohibitive, I could not find a sod provider but Im sure they are around, I have seen it and it does look great.

Not sure about Bermuda but St Augustine requires alot of water.

Bahia grass is whats suggested in my area. Thanks

When I google wax myrtle I see a tree, not a ground cover, am I missing something? Maybe you are suggesting I prune it so that it remains low to the ground?

I did not know it was a nitrogen fixer though so that is interesting and Ill keep it in mind. Thanks

I must have missed the memo on “ground cover”! It’s definitely more of a medium to large shrub. But it will spread and “cover” the ground effectively.