Around this area we had been dealing with constant rain for a few weeks, sometimes inches a day. Right now most of the leaves are a pale green/yellow with green veins. 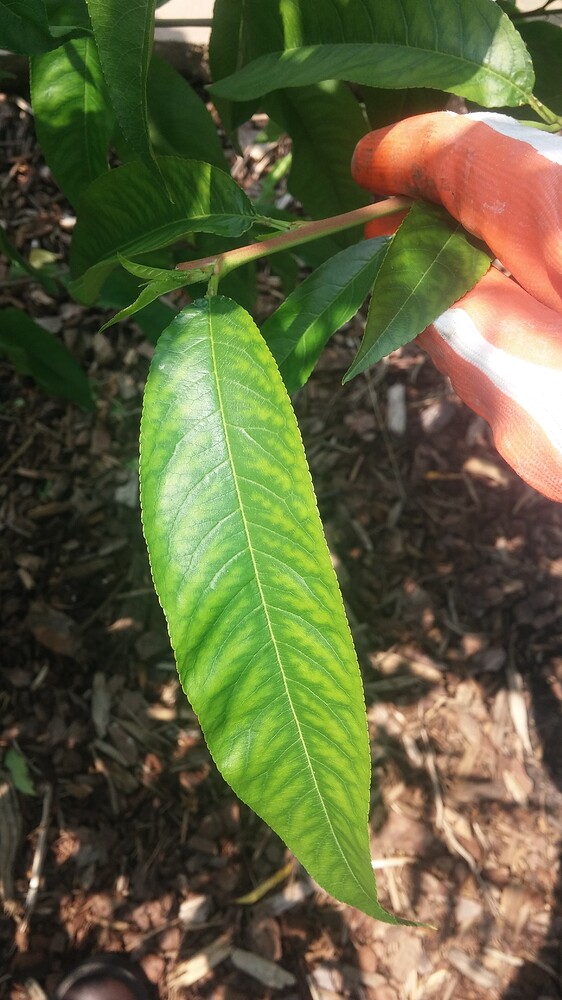 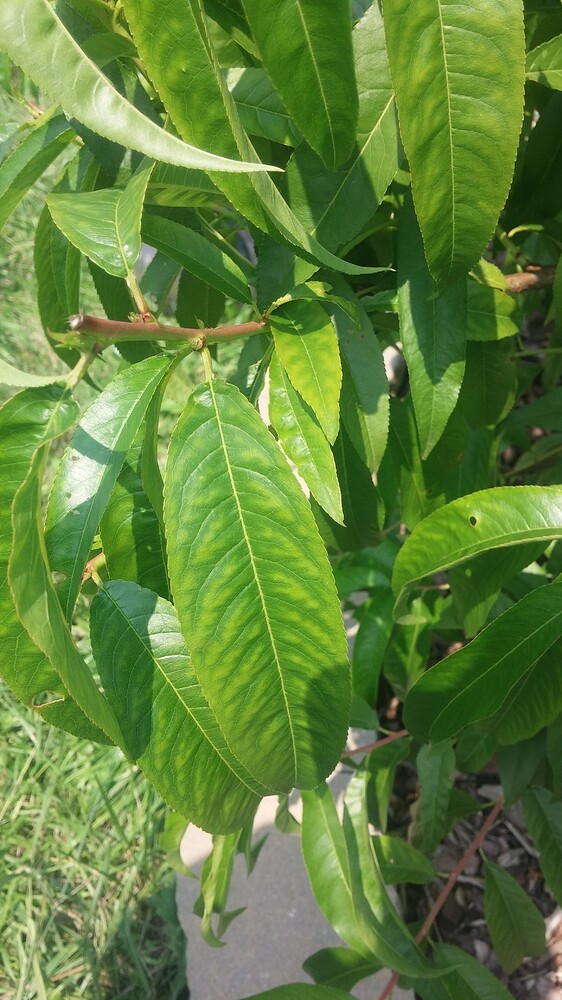 Also I have a PF-5B peach which I’d the runt of the set. It has grown but not any where near at the rate of the others. It to is suffering from the same discolored leaves but also had a few with reddish/pink spots on them. I am thinking the spots were due to low N. I applied a feeding of blood meal lat week and no new red spots have shown up. But one thing that doors bother me is the curled leaves. 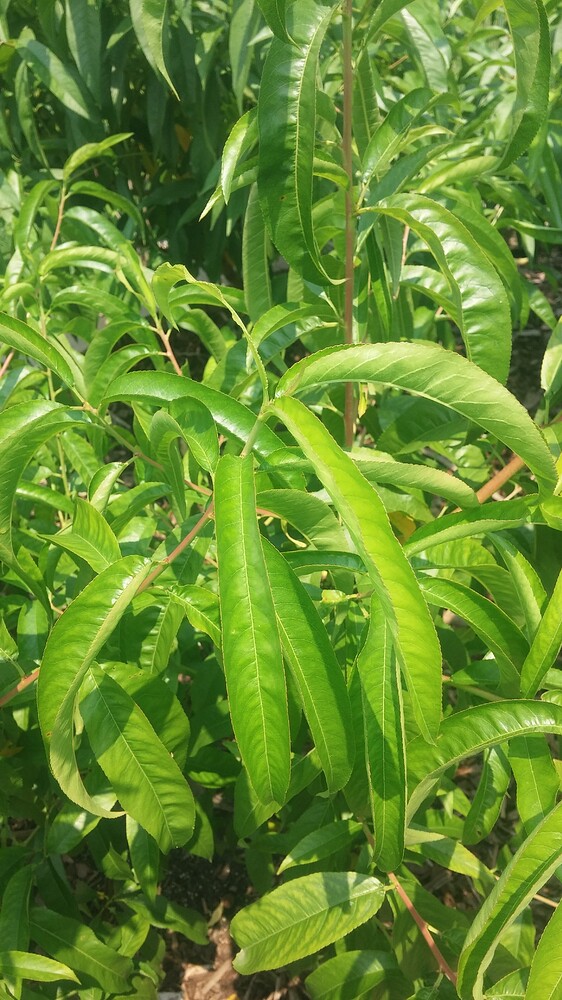 The tree just doesn’t have the same vigor as the others and doesn’t look as full. 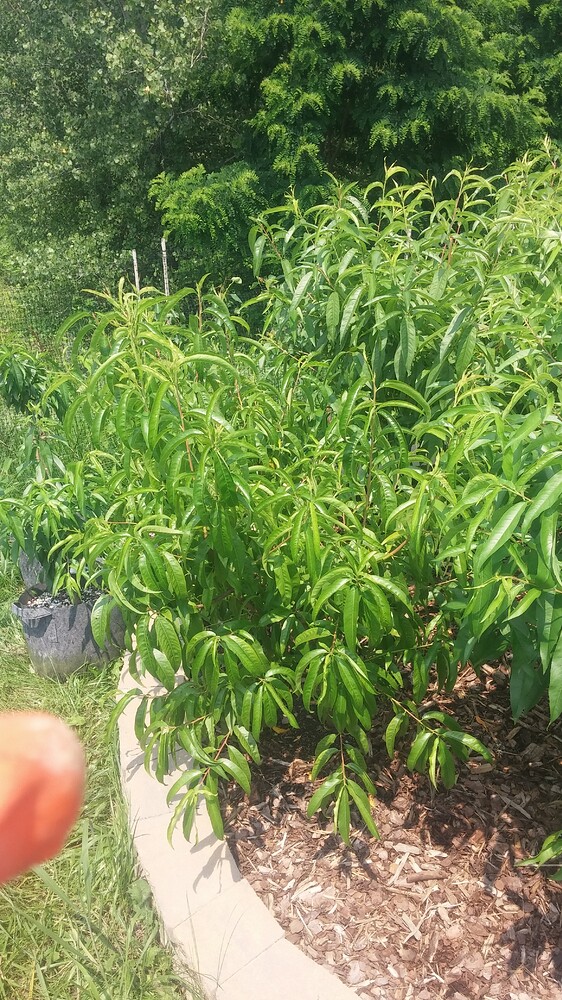 Any help would be appreciated.

I’m not sure what the discoloring is,but I have a Fantasia Nectarine that has the curling leaves.Could it be variety related?Are your trees fruiting this year? Brady

It seems to me Manganese deficiency symptoms

The rain situation here is also terrible, which is also what I attribute to most of your leaf problems. It’s almost impossible to grow peaches under constant rain.

All kinds of foliage issues, bac. spot, fruit rots, poor flavor. The curled leaves are the result of all the rain IMO. I know it doesn’t make sense one tree would be affected, while another right next to it is not, but that’s what I’ve seen. I’ve seen even some of the same varieties where one tree had light unhealthy looking foliage and another darker green. Certainly some varieties are more generally affected than others.

I agree w/ Alcedo, the mottled leaves look like Mn deficiency to me. This year I’ve been applying a chelate mineral pack to try to remedy the situation, but it’s a terrible year to test it. With all the rain, the foliage is N starved anyway. In spite of that, I think I’m seeing less leaf mottling than in years past.

Do you think my trees would benefit from an application of say Blood Meal for a boost of N?? Or should I let this year play out? Right now the next 5-10 days they are forecasting sunny and warm with slim chances of rain on only 2 days. So the water situation SHOULD calm down here (then again you never know).

Now for the Mn deficiency… What is the best way to remedy this? Buy some manganese sulfate?? Do I do a foliage spray, or a root soak?? How much to apply and just a single application??

I myself would take a soil sample and figure out what’s the pH level
Peaches/nec prefere 6.3 6.5 If you above, this means that your soil contains a lot of lime (for these plants)

The elements iron, zinc and manganese are hardly to be absorbed by the roots
a quick way is to spray with a remedy against chlorosis,… but this is temporarily especially on a calcareous soil

Do you think my trees would benefit from an application of say Blood Meal for a boost of N?? Or should I let this year play out?

Now for the Mn deficiency… What is the best way to remedy this? Buy some manganese sulfate?? Do I do a foliage spray, or a root soak?? How much to apply and just a single application??

Last year I thought about getting some Mn sulfate but ended up going with the mineral pack instead. It takes 1/2 lb per acre. I’ve just been tank mixing it every time I spray. I’m using ZMC express, which contains zinc, manganese and calcium as the main trace elements. It contains some others, boron, iron, molybdenum.

I would have preferred a stronger response, but the rain has been so horrendous, in addition to N deficiency, the trees probably have other deficiencies.