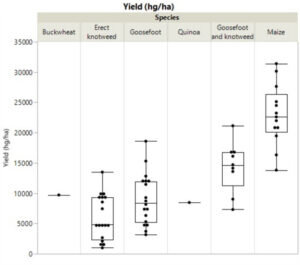 Make some room in the garden, you storied three sisters: the winter squash, climbing beans and the vegetable we know as corn. Grown together, newly examined "lost crops" could have produced enough seed to feed as many indigenous people as...

I love how many people have such a hard time believing that earlier humans created food forests and that many nomadic cultures farmed despite the ample evidence. Have you guys read anything up on the lidar they are using in the amazon rainforest, its very interesting.

I have been looking for these plants for several years,
With very little luck .
I think I found erect knotweed this year,
And have a Mexican strain of the goose foot , but I believe it’s different than the one that was historically grown in this area.
If anyone has access to seed of these plants I am interested.
These are the kinds of weeds I want on the farm .
Another link;news – Lost Crops

The book “1491” makes the claim that the entire eastern forest of the United States was a gigantic food forest / orchard managed by the Native Americans.They pointed out that the great majority of the trees were either oaks, hickories, or chestnuts, and all of these were staple foods for the people of the region.

I’m not 100% convinced, but it’s an interesting thing to think about.

Some biologists will argue it was managed by the black bears. The evidence is reasonable.

They pointed out that the great majority of the trees were either oaks, hickories, or chestnuts, and all of these were staple foods for the people of the region.

I tried growing buckwheat to use as home made chicken feed, but deer ate all of the plants. This year, with more protection, I may grow a few types of amaranths, just for fun.

So many of these have such tiny grains. I wonder how hard it was to purify them.

@jerry quote
(" One wonders whether that’s an indication that the forest was adjusted to match the indigenous people’s dietary preferences, or rather the reverse.")

I think a little of both !
I believe native Americans set fires ,likely in the fall, to remove leaf liter, so as to make nut harvesting easier,
Oaks being realitvly fire tolerant , this favored the oaks.
While thinning ( killing ) maples ,etc
So I believe they set fire to make harvest easier, of a existing resource , but that fire increased the resource in the future.
Most of the plants in the articles above ,are flood plain plants,
And likely where just harvested from wild stands, at least initially ,until they learned to cultivate.?

I wonder how hard it was to purify them.

Most of the small grains can be cleaned by blowing out the chaff using a couple of baskets on a moderately windy day.

What a great book. I thought i was the only one who read it… it makes sense that the Native Am’s managed the forests for edible nuts. They weren’t dumb !

I’ve got loads of Goosefoot (lambsquarters) here. It grows like the weed that it is.

The common goose foot ( lambs quarters ) here is mostly:
Chenopodium album - from the old world. ( or hybrids ?)
Chenopodium berlandieri is the new world type , referenced in the articles above. The cultivated northamerican stain of which may be lost to time ? It had a thinner seed coat.
Both can be used similarly, and yah ! They grow like weeds!

Some biologists will argue it was managed by the black bears.

Do you think passenger pigeons had a large part to play in managing this forest? While their small size would have likely prevented them from dispersing larder seeds, their manure deposits would have changed the ecology greatly. I have heard anecdotes that some of your tree diseases may be worse now that trees aren’t having massive loads of phosphorus etc dumped on them regularly.

There are members here who will testify to the extreme poop output of black bears.

(" extreme poop output of black bears.")
Yah, especially when feeding on apples !
There are lots of seed in those piles , they just don’t tend to poop in a straight row .! And the trees end up like a folded umbrella .
Have seen them treat large juneberries the same way, in the mountains, which may have benefited from the bear pruning and seed dispersal

I definitely have seen blackbears spread raspberries and other berries here in colorado and if you follow game trails its almost all berries (Service berry and chokecherry also) and they seem to help spread thimbleberries as well. While they would also help space out trees in a forest slightly just by bustling between them, I do not think they would be responsible for the mass amount of symbiotic plantings of 3 trees/bushes and the spacing of these food forests. I will try to find some articles but there are so many native american (From north to south) examples of symbiotic plantings (many in pairs of 3) as well as the north american native tribes and there reported purposeful plantings of the blood peaches as a good example of how quickly they purposefully spread and cultivated the trees.

And yet berries are a fraction of the black bear diet.

As a recovering ecologist, I’d like to note that

In short, human management heavily influenced the North America first encountered by Europeans, but it was definitely not a wall-to-wall food forest utopia.