This post has been deemed private by the creator.

Brilliant pictures, the detail is impressive. You could sell those, and the other ones I’ve seen on your site, or maybe you do. I’d say the macro was a good investment.

I find when I do the real close ups, I prefer to manually focus.

I may have asked before but what kind of camera do you use?

What kind of camera?

Incredible photos! I love it. But thanks for showing me how awful my own knife skills are by showing those perfectly cut scions!!! One of these days I’ll learn how to stop scooping mine!!! I know…its all about doing it in a single motion, but somehow even with one pull I usually scoop or hesitate or do something to mess up my cuts. Oh well. Great pics!

Very nice rig! I bought a Nikon N60 (maybe) film (?!?) camera years ago before I took a trip to Germany, I had used a Minolta rig up to that point for a lot of landscape/travel pics. Like you, I preferred still shots and landscapes and didn’t do a lot of portraits. It did okay, but I wish I had got a Nikon earlier, the quality of the lenses are so much better. Leica or Hasselblad would’ve been better, but too pricey.

Now my old Nikon sits in a box, never to be used again. Back then I didn’t think digital would take the place of film, but that’s just another thing I got wrong!

We have a Canon Sure Shot as our best camera, it does alright, but we need an upgrade.

Lovely photos. I think I enjoy macro photos more than anything else.

@thecityman --my first thought too about that cut!! 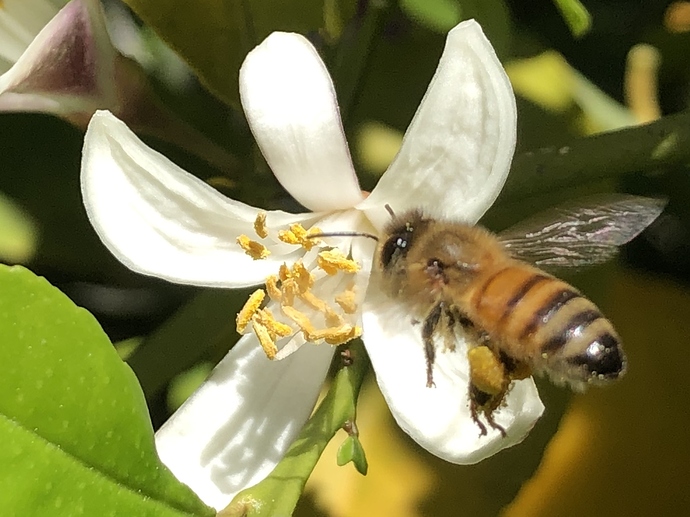 I use a Nikon D90 for anything with a white border around it and the rest are taken with a Panasonic Lumix DMC-ZS1 . The shots above were captured with a Nikon 18-55mm f/3.5-5.6G VR DX AF-S Nikkor Lens

All those words I dont know what they mean. I happen to have a Lumix DMC-FZ70. Could you recommend some of the settings to help an photo idiot like me take decent pictures? I have a trip to Disney coming up.

@lordkiwi (Carroll), I think @ILParadiseFarm (Joe) gave you better info than I could, especially considering he also has a Lumix camera.

I agree in P mode the camera does everything for you, it sets the aperture/shutter speed and auto focuses, which does a good job in most cases.

I can elaborate on how the other modes work, though:

In A or aperture priority mode, I think you select the size of the relative shutter opening, also called f/stop, and the camera automatically sets the shutter speed to get the proper exposure. F/stop settings can range roughly between f/1.4 and f/22, and anything in between. Basically the lower the number, the wider open the shutter will be, and more isolated (or in focus) the subject matter will be from things in the background. A higher f/stop means more of the subject’s background comes into focus. Usually you use a low f/stop number to take good portraits, or close-ups like Joe has shown. High f/stop settings are good for landscape shots when you’d want more of the pic to be in focus. I used higher f/stops like f/22 when I took my landscape shots.

S mode, or shutter priority is opposite of A mode, in that you set the shutter speed, and the camera sets the proper aperture for the proper exposure. I don’t know why this would be used, unless you’re trying to maybe capture an action shot, like in sports or similar. You would set it to a fast shutter speed like 1/2000 of a second or similar, so that the action is frozen in time better, and not blurry.

M or manual mode allows you to control both shutter speed and aperture, and requires you to do the focusing. I used that mode the most for my landscape shots.

A good tip if you want good crisp shots is use the shutter release delay so that when you press the shutter button, it delays a few seconds before it releases the shutter and takes the picture. This allows you to steady the camera before the picture is taken. Using this technique with a tripod would be ideal, but a tripod can be inconvenient in some cases.

When I took my landscapes, I would shoot at like f/22 which means to get a proper exposure the shutter would have to stay open maybe a half second or maybe even a couple seconds. No one can hold a camera steady that long, so a tripod, plus a remote shutter release or delay was essential.

Every time I see a bee and I have a camera in my hand, I give chase hoping to get the pollen collecting image like you showed. I have some good hummingbird and dragonfly shots but I still need a good bee collecting pollen shot.

I adjusted the strap on my camera so that when it is around the back of my neck I can extend my arms out to a comfortable position and steady the camera some by making the strap taut.

Anyone interested in macro photography should check out Don Komarechka to see just how inferior my photos are compared to a professional.

WOW!!! This are the best pawpaw flowers ever! Congratulations!

Great pix!! I can’t believe how far in she got that snout. I’ve never seen one with a snout that long. This year I only found one doing its business, usually I find 3-4.

I want to squeeze it

This bug gave many snout envy.