After a thunderstorm with a 50mph wind gust, I have now lost all but one of my initial orchard planting 6yrs ago. Last night, two trees were snapped at the grafts, clear, bright, undiseased wood, moderate fruit load, looked like I had chainsawed them at the graft union. In the last 3yrs., the lost trees were on a mix of G41, G202, G935. Trees on b118 and m7 have not failed and carry similar fruit loads. 11 out 12, 6yr trees, 5 this year alone. Has any one else had this kind of breakage? Is there a major problem with Geneva rootstocks?

@Chikn I was told years ago by Cummins geneva rootstock required staking when young or it would break. mm111 is a great rootstock for this area does it not do well there? Geneva apparently grows really fast and all fast growing trees i know of are given to breaking. I was also told once they have grown a few years any problems they had dissapeared.

I was told the same thing and all trees have been staked, fenced and rabbit caged. One was on an espaliar and broke. I’m calling Cumming’s tomorrow and asking some questions and I may have an attitude problem.

The failures are on supported 4-6 yr. budded trees with a fruit load. Trees that I grafted with cleft grafts on the same stocks, same age, have not failed.

Yikes… following! What a bummer, Phil!

Jon Clements of UMass posted a video from their Cold Spring Orchard of rows of G.41 (I think), and some others, snapped off at the graft from a high wind event. Jon should be fairly accessible, you can probably find his email address at the UMass Fruit Advisors website. He’ll be able to give you info on some of the Geneva weaknesses, or direct you to pertinent info.

So sorry to hear about the loss of your trees.

It is interesting to read your observation about the differences of the strength of graft unions between budding and cleft grafting.

Here’s a link to a forum thread that touches on the event Andy is talking about (with picture):

Aaak! I’d advise adding at least twice the number of T posts. Your rootstocks are not self-supporting, and you’re creating giant sails that tend to snap off at the graft union just as they are all maturing and are loaded with fruit. I’ll be able to hear the sobbing all the way from California. [image]

And I agree with mamuang, the info about the performance of cleft grafts vs. budding is very interesting and useful. Picking up on Scott’s point just below, I’m curious if commercial orchards tend to use more budded trees vs. cleft grafted (or other).

Sorry to hear that.

It could be that commercial orchards where they tested these new stocks were all staked, so they didn’t see so much of this. I had problems with breakage on various Geneva stocks and I no longer use them. Note I stopped getting them back when G30 was the largest number being sold, I never tried the ones you are using.

After several storms with lots of rain and high winds about 20% of my G41 snapped at the rootstock too. These were 2 year old trees with about 30 apples per tree. Each tree was clipped to tight trellis wires starting at about 3 feet. The graft joint must have been very brittle and prone to failure since these trees were well supported and not overloaded with fruit.

Also lost a whole row (25 trees) of 2 year old G11 trees because of a trellis failure. These trees were 10 feet tall with a good crop. The “deadman” support post which was 3 feet in the ground with 80 pounds of concrete on the hole at the end of the row was pulled out of the ground. None of the G11 trees snapped and if I can get the trellis back up I believe most of the trees can be saved.

I was told the same thing and all trees have been staked, fenced and rabbit caged.

I’d say the concerning thing is that they have been staked and still broke.

G.41 and G.935 are definitely known as having their problems - G.41 for weak scions/rootstock attachment and G.935 for being virus susceptible. I’d not be surprised if virus susceptibility showed up as a weak union too. 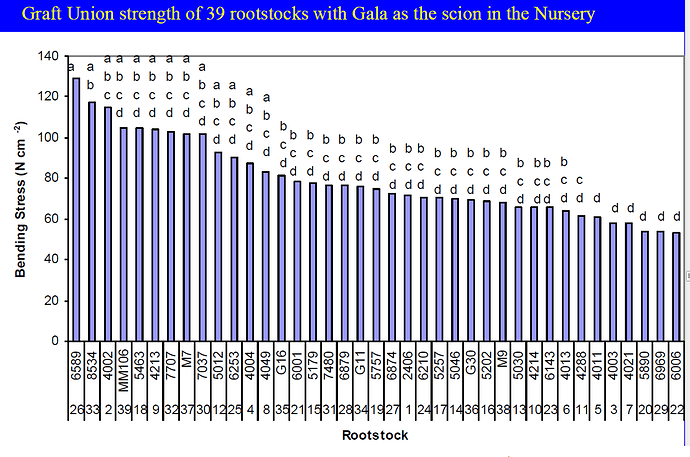 On the positive side, all my G11 trees have grown quickly and should produce a nice crop in year 2.

Unfortunately, the size of the G11 trees demand a very beefy trellis. “H” style bracing at the row ends may be required to support the load of the trellis. These 10 1/2 foot trees act like a big sail when the wind hits. Not sure if post driven next to each tree would improve the results. Something very substantial is going to be required at the end of each row to keep these trees in their place

Ughhhhh, I purchased 20 of these rootstocks this past spring.

Some of the Geneva, such as G11 or G41 bloom the second season, with a wee bit of fruit set.
This would be a big reason it is being used. I’ve not had that with Bud-9. Also, the big guys tear out hundreds of acres of giant old trees and replant immediately with thousands of little trees with new varieties on them…and the Geneva roots tolerate that. At least so they say.
I am going to try it with G890 and Bud-118 on a couple of old trees I intend to remove.

But, we are still doing a trial and error thing…since most of the Geneva roots are not used by the mass marketers / big box stores to homeowners.

Oh no thats not good…

Well, did you notice the test results for all the Geneva roots was with grafting GALA apple scionwood??

I did a lot of G 30 bench grafts years ago when they were all the rage. The oldest batch went “wobbly” at about age five or six then grew out of the wobblies in three or so years (after I anchored them). I did not graft Gala which has big problems on G 30. Now the trees don’t look so vigorous at all but that may be my poor soil that was tobacco and corn farmed for centuries.

I have grafted at least a dozen varieties both heirloom and modern to G 30 and none have shown brittle or problem graft unions- none. Gala is an outlier I believe. My only problem has been root instability from ages say 5 to 8 or so.

Most of my trees are now on Geneva roots. I admit I am a “shiny new things” kind of person. I used to have a bigger diversity (several on M7 and B9 and a M111/G11 interstem).

I took some pictures of what budded Geneva unions look like tonight since I have an assortment. All from Cummins.

Crimson Crisp/G41 - I read this one is brittle. Ugh. 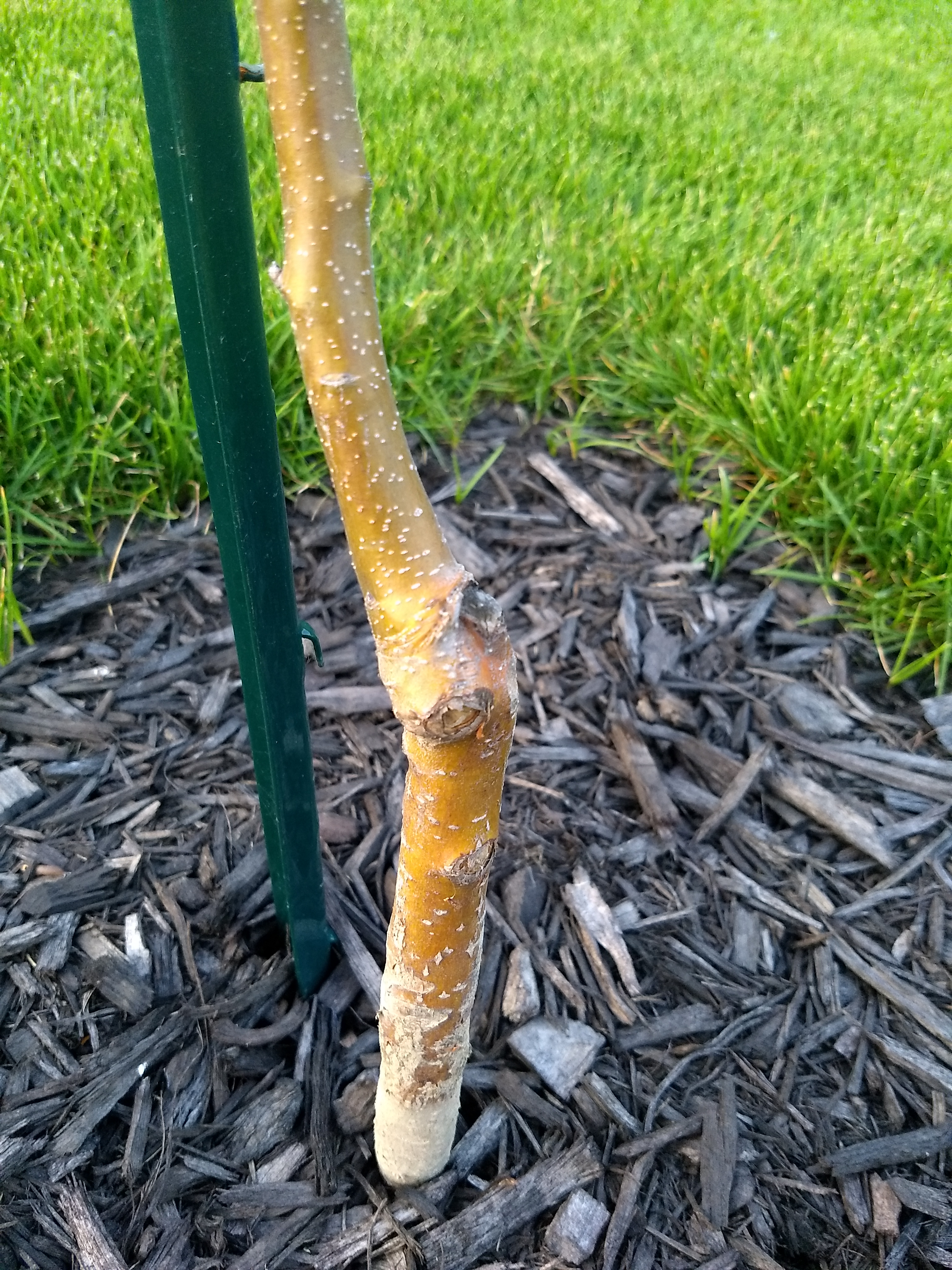 my own grafts
Tree carcinoma - Suncrisp/G969 - cleft (is it Agrobacter tumefaciens?) 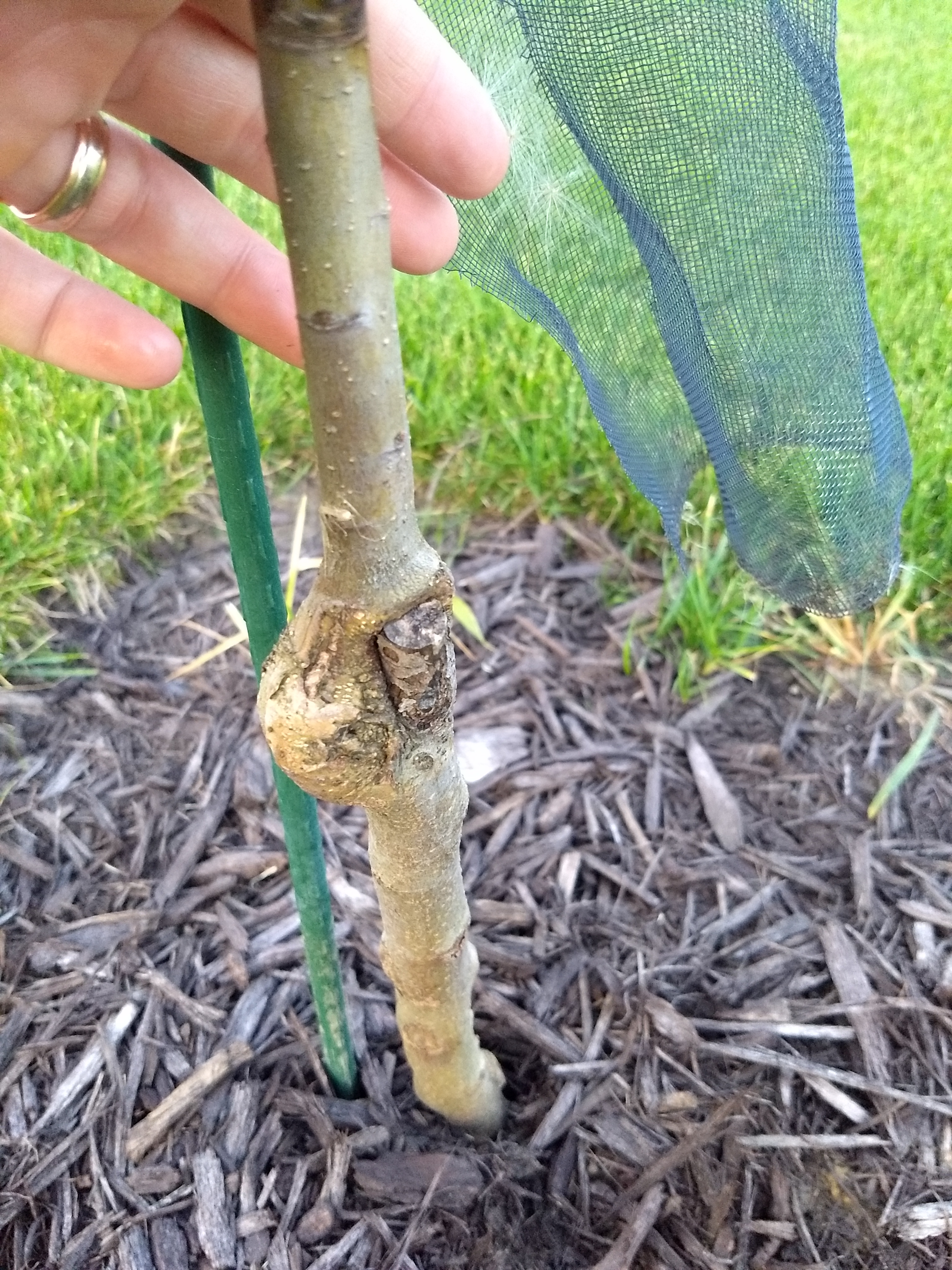 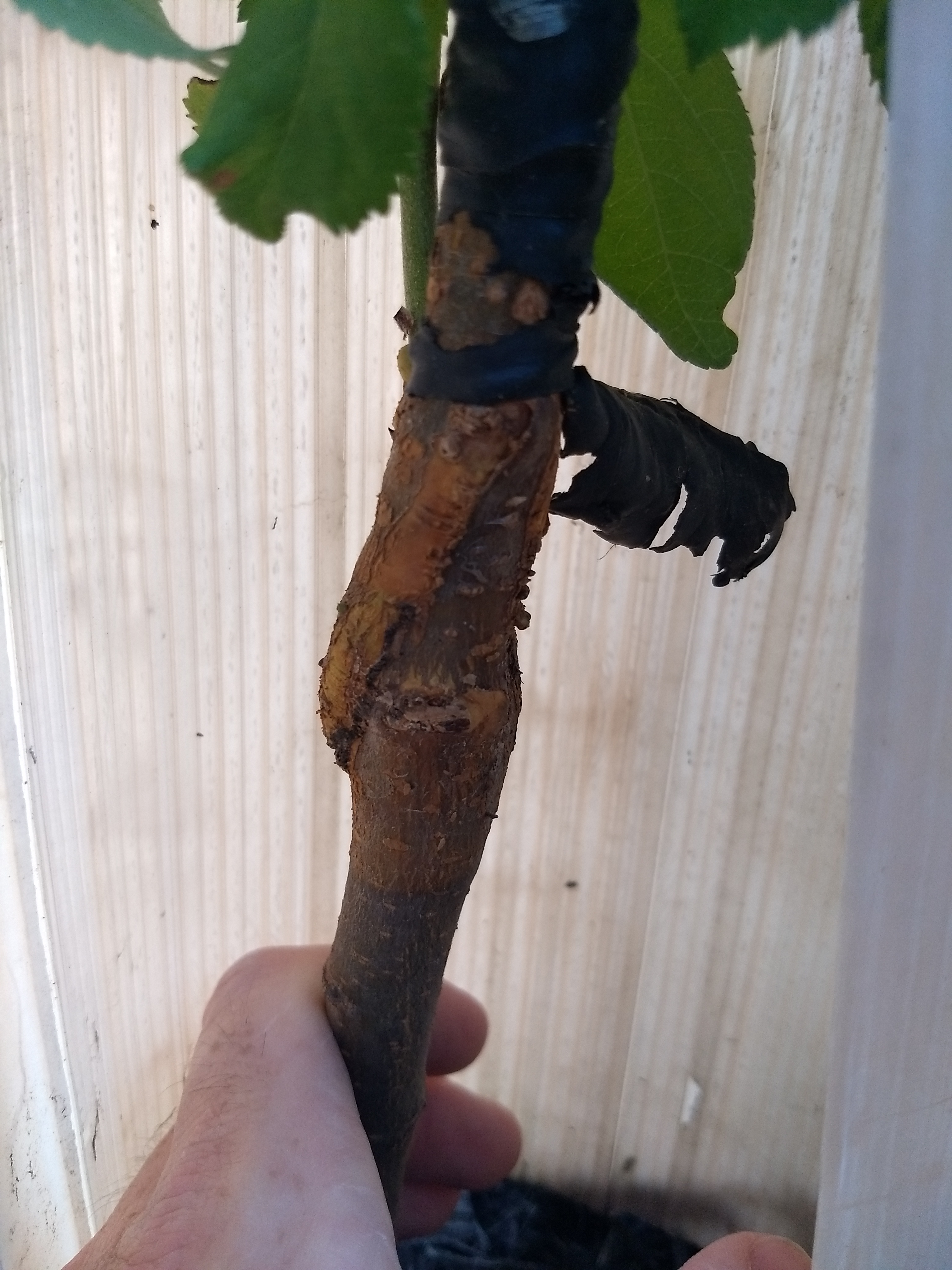 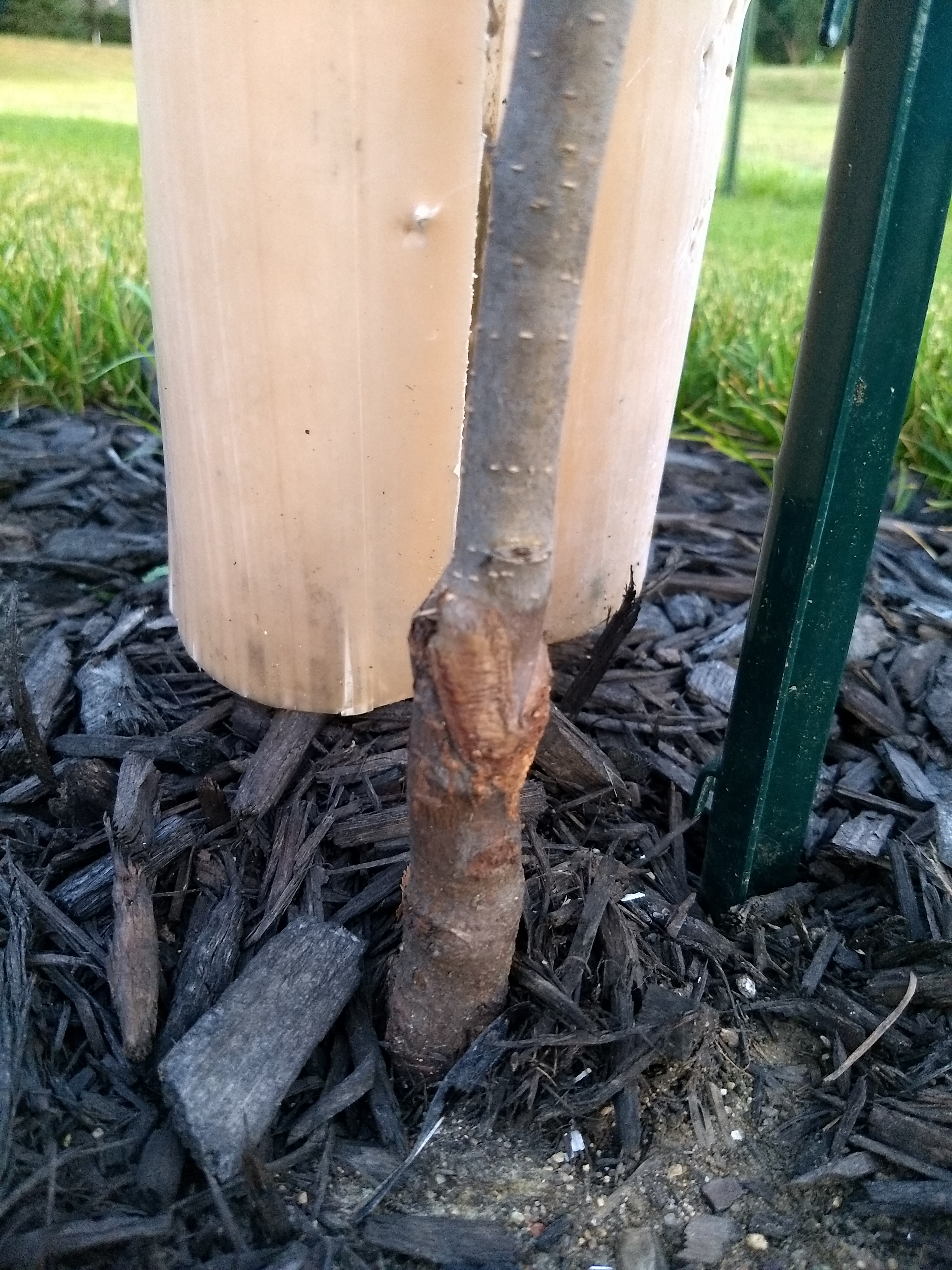 I have a bunch of 4 year old Honeycrisp apple on M111 and it is terrific rootstock. 48 trees are all healthy and growing well. We get a ton of wind here and it has had no effect…trees are not even leaning!