Does anyone else do maple syrup here? I did a search and didn’t find much conversation. I know it is a bit off-topic for a fruit forum…but it certainly wins the brix contest. If there is any interest, I can post my progress this year and a simple method for anyone interested.

i am interested. tapped my maple tree for the first time and not much sap. i must be doing something wrong.

Not off-topic in my mind. Very interesting stuff.

I’m very interested. My Maples are only 2 years old but I intentionally planted 10 of them. The website said they could be tapped at 10 years old but I have no real idea.

I’m no expert, but I have done this for a few years and helped my grandfather when I was young. Boiled 68 gallons of sap down to 2 gallons of syrup last year. Here’s my method;

Tap trees when you expect temperatures to be in the 40’s during the day and freezing at night. This is mid to late February here…running late this year. I use brew buckets to collect sap. 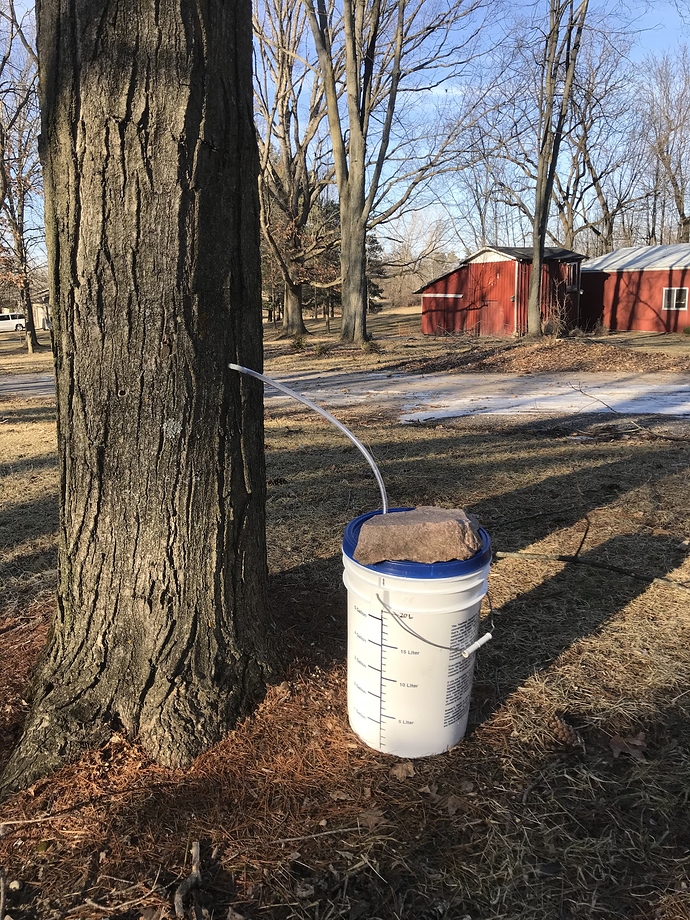 I use very cheap water line fittings for taps. 3/8” barbed elbows and tees. 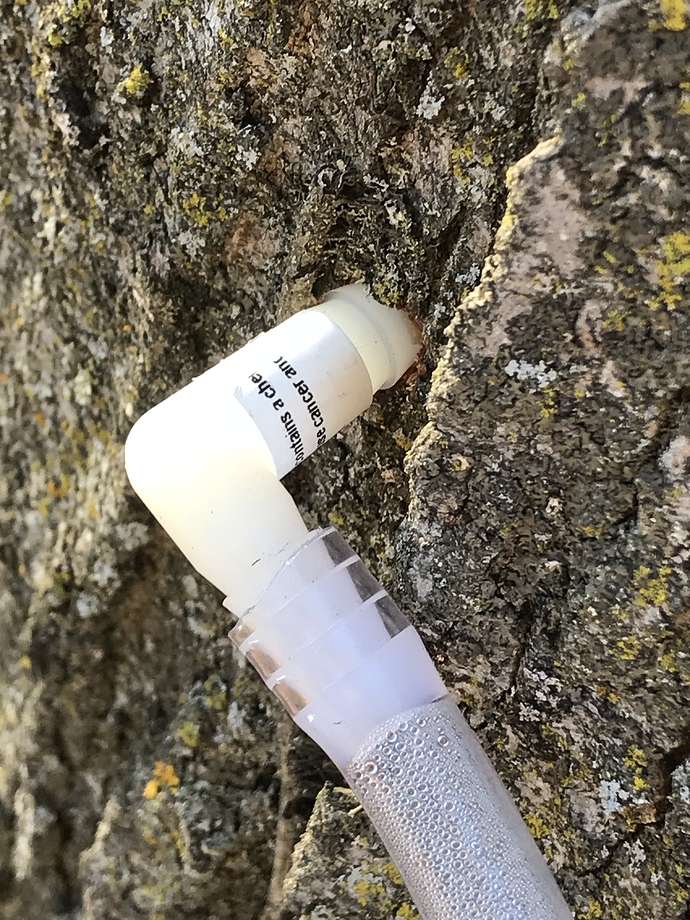 The size of tubing and fittings isn’t too important, but a smaller hole in the tree will heal more quickly. Drill into your tree at a slight angle so sap will drain out. The angle is really just so rain water will not collect after you remove the taps. I drill holes about 1.5 to 2” deep. Your drill bit should be small enough that you have to tap the fittings in with a mallet. Fittings only go in far enough to be snug. I always tap on the south side of the tree. The sun helps melt the sap in the lines and buckets. Tap trees that are 10” or more in diameter (not circumference). Large trees can have 2 or more taps.

For multiple taps in a single tree, I use an elbow for the first tap and run hose to a second lower tee tap like this; 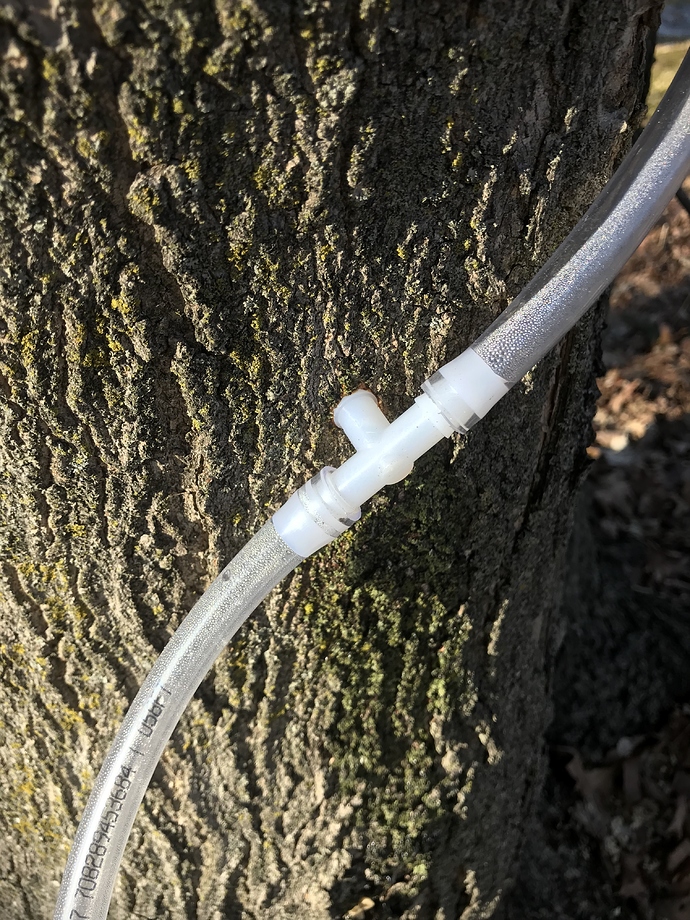 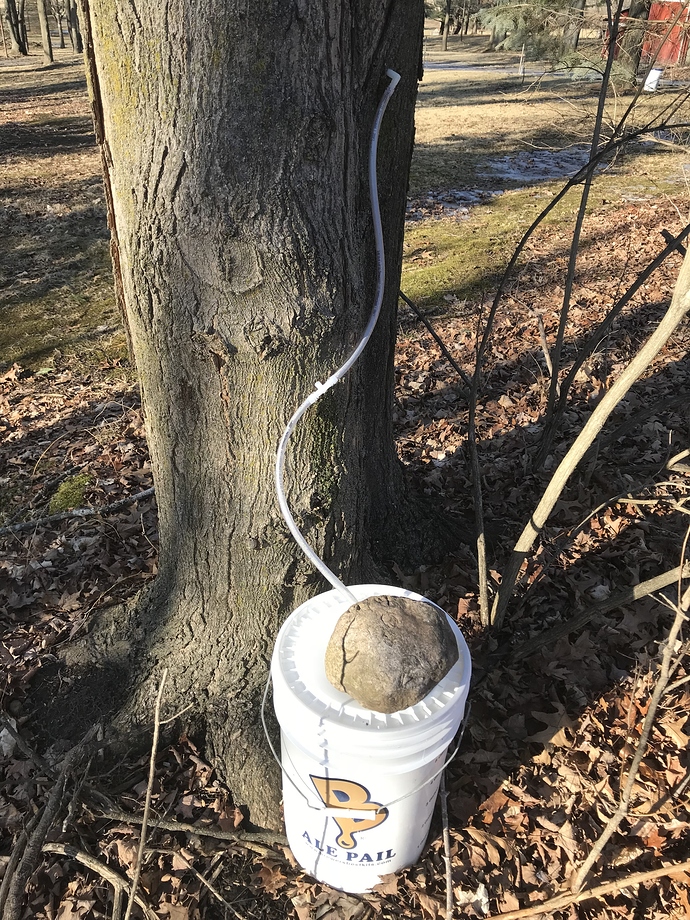 I’ll show the boiling process later, but I use large hotel pans over my fire pit. These are the pans they use in buffet tables…pretty cheap. 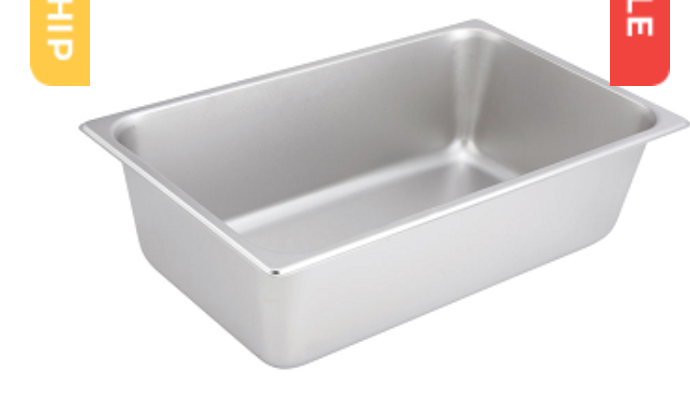 Trees: you can tap any maple (I have not tried this) but sugar maples have the most concentrated sap which means less boiling.

I have an abundance of firewood and fallen limbs from ice storms. Boiling sap is an effective and productive way for me to use this resource. This is not for everyone, some of my outside boiling sessions have been 12 hours.

The only thing you loose by boiling is pure water…and firewood. The sap is good to drink while it is still boiling down. It is like maple tea. You have to remember, though, boiling down to syrup serves many purposes. The very high sugar content kills most pathogens. Syrup will store for a long time. Watery sap will spoil or ferment quickly. Syrup also takes up much less space. You will have about 35 gallons of sap for every gallon of syrup.

how much sap should a fairly large tree produce?

Is there any such thing as “maple wine” or some such?

I have a batch of maple wine in a carboy right now. Not impressed so far but perhaps it will age well. I sometimes give a few buckets of sap to friends for brewing beer. They make a maple oatmeal stout. You just substitute sap for water. There are plenty of recipes out there for maple beer or wine.

So many variables. Sometimes spring breaks quickly and you get little sap flow. You can get various amounts of sap from different spots on a tree. I get around a third of a gallon of syrup from a tree or around 10 gallons of sap. My trees average about 20”-24” diameter. I also pull my taps earlier than necessary. I put six buckets out and I have all I can handle. Still have a half gallon left from last year.

Helpful hints:
Make the hole in the bucket lid fit tight with the sap line (my lines and taps are just water lines purchased at any hardware store). Angle the bucket so the hole is uphill. This will keep rainwater from getting in the bucket.

Cut the sap line at a sharp angle where it goes into the bucket. This will make it much easier to fit into the narrow hole. Much of this will make sense when you are trying to fumble around with frozen hands.

Snap on lids are nice, but murder on your cold hands. I only snap down two sides of the lid, making it easier to remove when emptying buckets. Spigot buckets might be nice, but I expect the spigot would be frozen when you need it. Many of my buckets are half ice when I start boiling.

We tapped box elder last year, which is in the maple family. The syrup was very good, well worth doing. Boiled it off in hotel pans from a restaurant supply store, as someone said above, because i don’t have kitchen ventilation we used the fire pit. I have to say, it’s really nice to do because there isn’t a whole lot else going on outside for me during syrup season.

I have found that tapping the tree on the side that it gets the most sunlight will get you the most sap.

I stored the syrup in mason jars in the fridge but they developed mold after two months. After that i moved any that i wanted to save to the freezer. Might be I didn’t boil it enough.

Please do yourself a favor and never boil down sap inside. Even under ventilation, it will peel wall paper or warp cabinets. You have to put an enormous amount of water vapor in the air. I tried it twice. Wallpaper peeled on the first try. The second time I walked away for ten minutes and came back to a smoke filled home. The sap turned to syrup and then to charred carbon way faster than expected. I will admit, though, that I complete the last bit of boiling inside. I stand over it and watch carefully. By this point I only need to get rid of a small amount of water. Seriously…you don’t want to boil inside, especially if you haven’t done this before.

Also, properly boiled syrup should keep for a long time in the pantry. I use sanitized mason jars. Once opened it will keep for at least a year in the fridge. You should be able to keep it in a freezer forever. Check these times with a legitimate source…but I’ve never had syrup go bad. They even say that if you manage to get scum growing on top you can scrape it off, boil, and use again.

If you want maple tea, I would still boil down to proper syrup. You can always dilute it later.

Another thought…boiling over a wood fire outdoors will likely get a bit of ash into the syrup along with a bit of the “smoke flavoring”.

Another thought…boiling over a wood fire outdoors will likely get a bit of ash into the syrup along with a bit of the “smoke flavoring”.

You would think so, but after hot filtering through flour sack cloth to remove debris, I’ve never noticed any smoke flavor.

I can get a hint of smoke flavor at times and it’s a good thing. When I made a batch of maple wine it started with a smokey scotch flavor and was quite good. The flavor disappeared after a few months in the carboy, though.