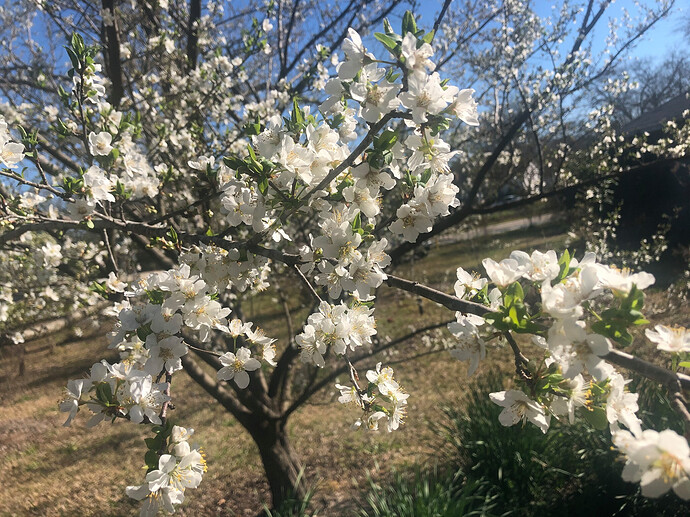 Greetings all: As some of you may remember I have a Mariana Plum which is typically used as rootstock, but is a fabulous plum in its own right, especially for parts of the Deep South with high disease pressure from bacterial stem canker. Mariana is a Prunus caricifera X Prunus munsonia hybrid, and is not self fertile. It did not appear to be cross fertile with the Chickasaw and Asian X Chickasaw plum varieties that were in the yard the first few times it tried to bloom. I then discovered that it was fruitful when I brought wild P. umbelatta (hog plum) branches in the yard. This year I had two P. caricifera X asian plum varieties to bloom (lightly) in the yard for the first time, and the Guthrie Chickasaw cultivar bloomed (very profusely) for the second time. None of the wild P. umbelatta trees that I know about bloomed this year. I can now tell that the Mariana plum got pollinated very well.

My guess is that the two P. caricifera X salicina (Asian plum) hybrids were cross fertile with Mariana. However, those trees did not have huge quantities of flowers. Mariana having such good fruit set almost needs another explanation.

Here another very interesting possibility: I know that Guthrie has an established tendency to throw purple leaf seedlings which is a P. caricifera characteristic. Guthrie fruit has the richest flavor of any Chickasaw cultivar I’ve ever encountered. This is a character I very much associate with P. caricifera. My hunch is that Guthrie may itself be a P. caricifera X P. angustifolia (Chickasaw plum) hybrid. If so, the presence of two heavy blooming Guthrie trees would explain the heavy fruit set on Mariana.

I plan to test this theory this winter by planting Mariana seeds to see if a fair number of seedlings end up looking like Chickasaw plums or end up having purple leaves. If so that would imply that Guthrie is an effective polinizer for Mariana. This would be a big score for those of us in high disease pressure areas where the disease pressure may make the long term survival of Asian plum hybrids a bit dicey.

Marcus,
I am curious as to where in 8 B are you? And what type of plum disease you encounter. I was raised in West Tn, where we had many wild plums that eventually went extinct for reasons we never understood. I would be interested in knowing what varieties you have that you may be interested in trading scions spring of 2022. I have been expanding my varieties here in Kent, wa where I now live.
Dennis

I’m in Statesboro Georgia, about 50 miles NW of Savannah. Over the last ten years my weather has been more 9a than 8b. We were 8a back when I was a kid, and 15F was common. Now we rarely go below 20 F.

Wild plums are disappearing everywhere because highway departments, power companies and pipeline companies all maintain their right of ways with herbicide instead of with bush hogs.

I have mostly improved Chickasaw types which are not commercially available. Several I have named. The ones I have are Toole’s Heirloom, Guthrie, Odom, N.C. McKibben, Sonny’s Yellow, Dot Piaza, Bouie Red, Bouie Yellow, Phips Red, Ridgland and a pink one that I have not named yet. I have four P. caricifera hybrids which are Mariana, Shiro, Sprite or Delight, Auburn University Cherry, and an unknown. I also have Robusto which is a Asian Plum X Chickasaw plum hybrid and Excelsior which is an American Plum X Asian Plum hybrid.

The main disease issue we get here on plum is bacterial stem canker. It will take out most cultivars within two years anywhere around Statesboro.

So far I do not See a canker issue here in Kent , Wa so I hope to use many of the above to convert my cherry trees to plum.
I also have 5 wild goose seedlings which is one of the wild plums I grew up eating in West Tn.
So I hope to see them produce in a few years
Perhaps we can trade some wild plum scions next Jan if you are interrested, let me know
Dennis
Kent wa

I have scion in the frig for Toole’s heirloom, Dot Piaza, N.C. McKibben, Guthrie and Odom as far as improved Chickasaw are concern. I also collected Robusto Chickasaw X asian hybrid and I think that’s it. Thanks.

Whom did you purchase your Mariana Plum from? I’m hearing their not all the same and if someone would like to grow this tree it is probably best to purchase from the same vendor as you did.

I got it from Trees of Antiquities in California. It was supposed to be a Jefferson plum, but the scion died. Mariana was the rootstock they used.

Roger that and thank you