So here’s the fun question of the day for all the Bee-keepers on here! I’ve been considering doing a “small” mason jar honey super. Is there any set limit of the size jar, and/or amount of jars you can do? Most use the large mason jars and do approximately 12 or so. Is there any reason you couldn’t do 24 medium jars or more if they were small jars? May sound like a dumb question, but I’d love some enlightenment 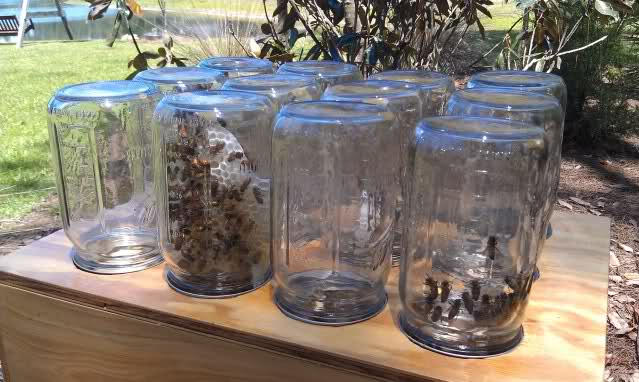 Has anyone here actually tried this? Because I’m highly skeptical. Sunlight hitting those jars would likely heat them up so much that it’d kill anything inside. Not to mention that the heat would also likely melt the comb. And, the bees would have no way to cool the jars like they do with a normal hive.

Also, all the pictures I’ve seen show a perfectly clean chunk of comb with no honey nor brood cells. Like someone just cut a piece of comb and stuck it in there. It’s unlikely bees would build comb in the jars like that - situated perfectly in the center of the jar. If they built any at all, I’d expect it to be attached directly to the sides of the jar.

Even if they built comb and filled it with honey, they aren’t going to fill the jar with loose honey. You’d still have to extract the honey from the comb - and there’s no way to do that with this set up.

This just doesn’t seem feasible to me.

It works trust me on that. This picture sadly doesn’t show the outer cover/box. You put the entire apparatus inside hive component. There’s no brood cells because you use a queen excluder to prevent brood from being deposited. 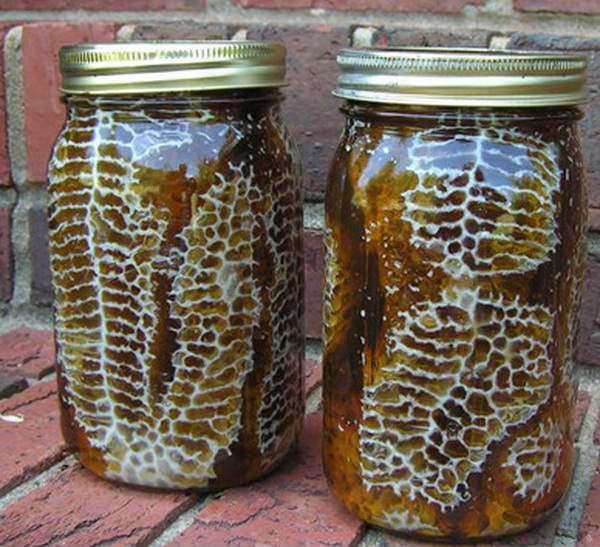 In addition you start the entire apparatus with a small bit of comb/wax to encourage the bees to further extend the comb. You do have to fill the jar with your own honey that has been spun or have the Flow Hive dare I say it. I’ve personally used this entire thing many times, but before I waste money on small jars and the labor/time to build a small apparatus, I’d like to know anyone experienced with this method if they’ve ever tried small tiny jars such as these: 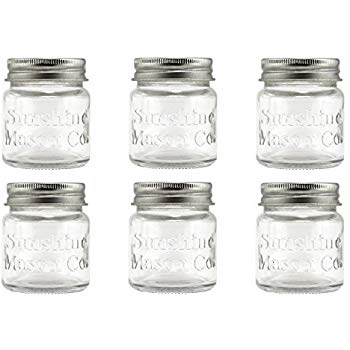 I’ve seen this done this before. When I did it a put a extra deep on top with a cover.

@BobC Have you ever tried it with mini jars or smaller mason jars? Looking to start building myself fruit baskets for friends and the farm. I want to include tiny masons with it vs. one of those giant masons (quart/pint). I’ll admit it’s more honey than I want to share haha

The honey built in a jar always looked interesting but I never tried it. If I was trying it now I most likely would use a pint jar. Probably would not take long to fill the jar if put on a strong hive.

I personally have not done this, but have read of it numerous times in journals from the 1800’s. Bees show a decided preference for larger cavities to store honey and may reject small jars entirely. I would stick to larger jars. This also tends to force swarming so whatever size jars, be sure to keep an eye on them for queen cells.

A wide mouth pint jar would b e
my choice if I were doing this…but forcing the bees into such tight quarters will llikely cause them to swarm much of the time.

I’ve seen queen cells form from this method, but you’re right I never thought that changing the size may induce that effect even more. Thanks for the brain storm

I have not tried mini jars. I used quart jars and maybe some pints… trying to remember… I do know you need to do it during the main honey flow so they will fill them up… and pull them before they start cleaning them out. Just like you would if you are making comb honey.