I’m a long time NAFEX’er who has prowled this list, but am just getting around to participating.

As a new user,I searched for mayapple and turned up almost nothing. This is one fruit that I am quite excited about and am surprised to see that (apparently) others don’t share that enthusiasm. I find the fruit to be VERY tropical, almost guava and passion fruit- like. I like the idea of growing it underneath canopy species b/c it’s quite shade tolerant and could probably hold its own quite well with those big leaves.

Unfortunately, mayapple doesn’t really grow here in VT, or else I’d have a ton of it. I remember huge patches growing up in NJ. The few that I have came from a neighbor who brought them back from a relatives house in Ohio. I see that there are some cool hybrids out there, some extremely ornamental. Does anyone know if the Asian species has tasty fruit too?

Glad to be here. Looking forward to swapping info and varieties.

Welcome aboard and cool topic! I have a few in shade canopies but they are still getting established and I have yet to try the fruit. We certainly have plenty wild in Ohio. Interested to follow along on this topic especially since I was unaware of selected mayapple varieties.

As a child in Ohio our forest floors were filled with Mayapples. I always thought of them as ‘fairy umbrellas’ and knew it had a white flower. Mom would caution us against eating anything wild except for blackberries, raspberries and strawberries. I had no idea the fruit was edible. I do not remember it being included in wild edibles. Thanks for the information.

They seem to be almost a holy grail in foraging circles, but get very little attention elsewhere whether for fruit or other virtues (beauty, ecological function). I find it SUCH a cool plant, and as I said, the fruits are VERY exotic and rich. There are some potent alkaloids in this species, including the unripe fruit, so some caution should be exercised with hybrids and other related species that don’t have a track record.

For those of you who have it growing nearby, have you noticed differences in fruit size, yield, flavor? As a species that forms clonal stands, I’d expect cross pollination to be a likely limiting factor. Curious if anyone has found large fruited ones, or ones having any other desirable traits, and whether those traits carry over from year to year or are related to vagaries of weather, fruit set, etc.

If I recall, it’s one of those fruits that has to be totally ripe to not be toxic.

Fun fact, etoposide, which is a chemo drug for some cancers, comes from mayapple.

Edit, memory confirmed here Mayapple, Mandrake - Eat The Weeds and other things, too

There are thousands of mayapples growing nearby here in southern Tennessee and the northern edge of Alabama. I watch for them each spring when they first send up new leaves.

Back in the day I dug some mayapple roots…for sale…but soon grew tired of that as it only fetched pennies on the dollar compared to Ginseng.

Ginseng and mayapple grow in similar conditions. Mayapple in deep shade in an older forest usually on gentle slopes, ginseng on steeper northern slopes in deep shade. Most of the ginseng is in shallow depressions where water flows in heavy rain, never where it washes, just where the soil tends to retain moisture. Mayapple is more tolerant of cold/wet conditions and of summer heat.

I’m growing two mayapple clones and am getting my first fruit on one of them this year. I have a friend with a collection of mayapple clones too. I tasted a fruit a couple years back from one of his clones and it was very mango like.

A old timer neighbor of mine (now deceased) made some kind of concoction from mayapple , I think using the root ? .,to kill potato beetles.said it worked good . I should have payed more attention, took notes .
.
,
I have had large areas of May apple, some years full of good fruit,
Other times few / none . Coons and opossums would quickly finish them off when ripe .
Now , I haven’t seen the plants in several years . Maybe deer eating plants ? Or other reasons .? Not as common here as they once were . 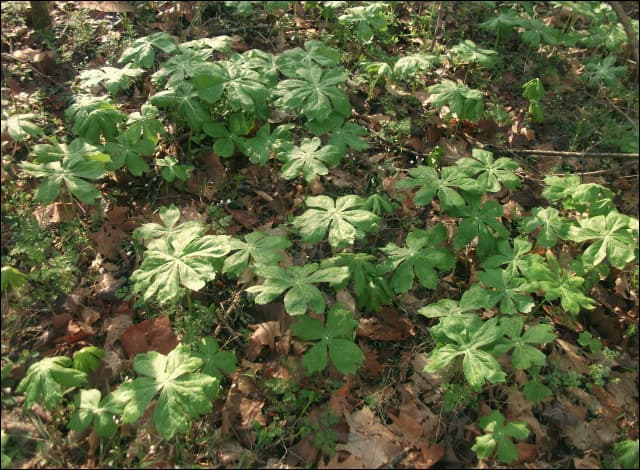 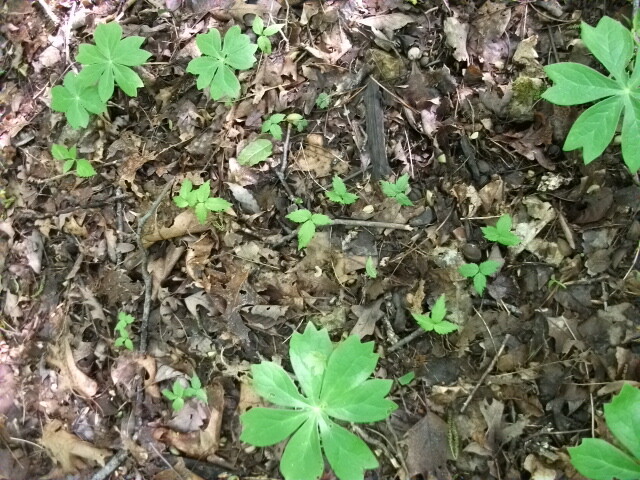 Have lots of mayapple here in southern middle TN… usually grows low on the hillsides, often in same locations as ginseng.

The 3 leafers in that second pic are ginseng seedlings… first year sprouts. Started from stratified seed.

Great pics! Nice to see them in context. What trees are they generally associating with in your area? I think of ginseng as preferring moist soil with somewhat neutral pH, and probably access to some calcium via bedrock, but I could be way off. That seems to be the story at least with most of the fussier woodland wildflowers here in VT, at least. I read alternate reports also that they either form large robust stands and elsewhere that they don’t appreciate competition. Maybe probably depending on site.

I don’t know what ginseng prices are like these days, but I’d gladly pay for crowns if any of you guys down that way would be willing to dig em and ship em!

I have one nice sized fruit this year that I’ve been checking every day or two. If I can beat the raccoons, skunks, and possums, I’ll stratify the seeds and grow them out. I’d really like to start a HUGE patch, though.

Zooming in, I see plenty of oak leaves in your pictures. Funny how things can vary by region, but oak here is generally on dry sites, often SW exposure. For woodland wildflowers here, I’d be hunting either in a seep or small riparian zone, or likely in a sugar maple stand. Usually N or E exposure. 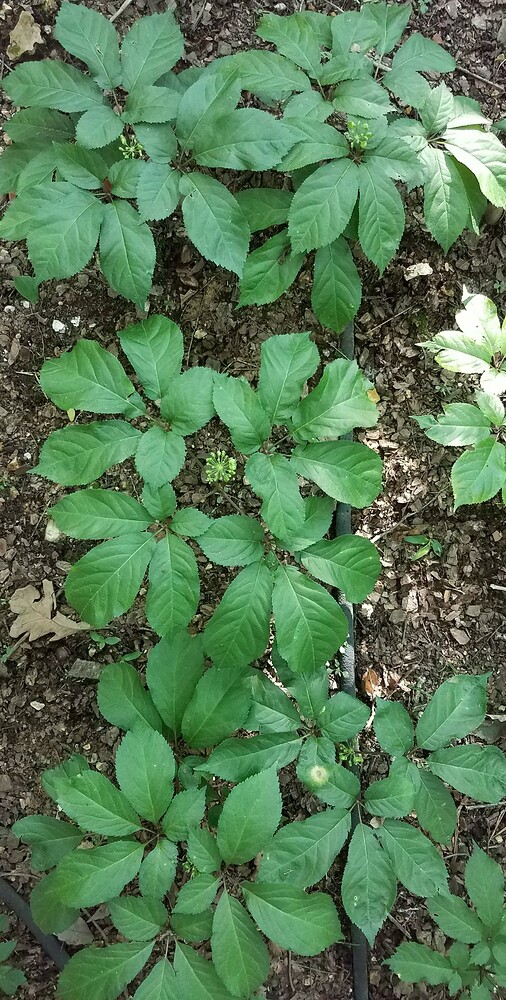 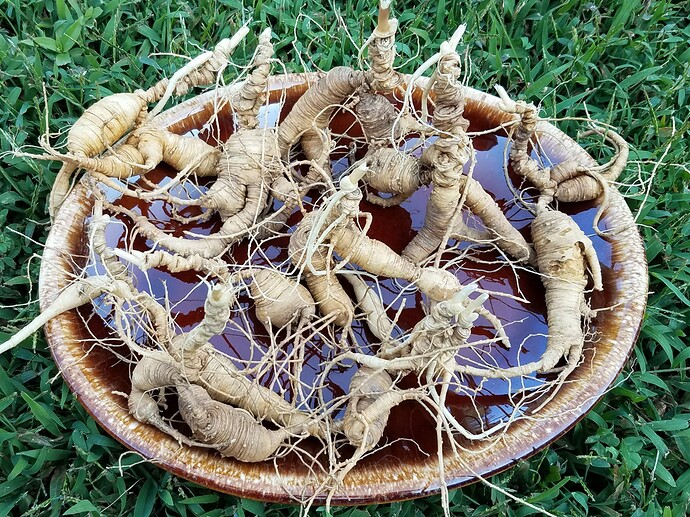 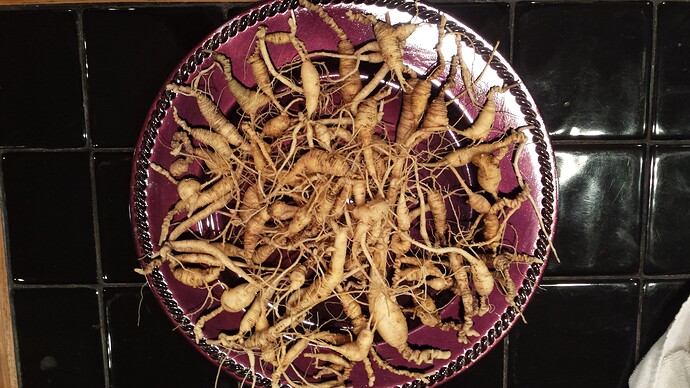 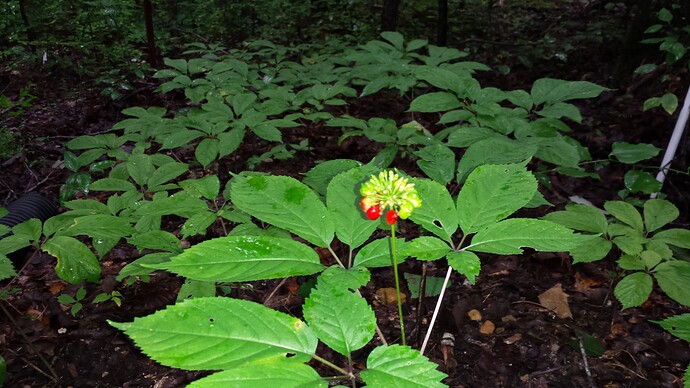 I know a little about growing seng

dont know if it grows around here. 90% of our woods are commercial forest land so basically continual clear cuts every 20 or so years. might grow on private or protected woodlands.

In the wild around here…KY and surrounding states…ginseng usually grows near it’s ancestors…that is saying the seeds didn’t fall far from the ‘tree’ or mother plant. (And the mother plant probably got harvested by someone and the seedlings remained and grew.)

So, 100 years ago, it may have been growing in a CHESTNUT forest. But, those trees died and other species took up the vacant space.

I’ve seen some ginseng in hot bone dry south facing slopes … but the roots were ancient/old and yet rather small. Does best here in north-east slopes, and near the bottoms of slopes simply because that’s the better soil making it easier to establish.
I’ve seen it begin to thrive after logging…seems it lived among big timber, but did not thrive and nobody found it…then after logging it grows more vigorously.

But, I’m rambling on here…been awhile since I’ve been hunting it…too many properties “posted” anymore that I trekked 50 years ago.

Much of the posted land got that way because people over-harvested ginseng and did not distribute the seed so it could grow back. I planted 20,000 ginseng seed in my wooded area in an attempt to get some established.

I wish humans did a better job of taking care of the woodlands we have.

I have heard that ginseng was fairly common here in VT as well, but it is quite rare anymore. I once found a journal article detailing the dispersal mechanism and distances of various woodland wildflowers. I remember looking at the data for ramps / wild leeks and the max dispersal distance was 3 ft. Gravity was literally the primary vector for seed dispersal. Many, if not most of the species found in rich soil under mature forest are similar. So it’s pretty apparent that those species really need extra stewardship as they not only depend on increasingly rare habitats, but they have a VERY hard, neh impossible time breaking into suitable habitats when they eventually become available.

Yes, many of these native plants evolved in human managed landscapes and are not adapted to a “hands off” strategy.