I had my My first fruit harvest of the year today. It was a Gris de St. Jean fig.

What makes it all the more remarkable is that I received it as a newly rooted cutting in August in a plastic cup (thanks @aphahn) and re-potted it into a 1 gal container and put it in a South facing window at work. Now, 1 day short of 5 months, it ripened the first fig.

Even better, the fruit was much tastier than any fig I’ve had before. Now, I haven’t really had that many- just grocery store figs and very late season figs from both Alan and my own yards. I didn’t like the grocery store ones and only some of the home-grown ones were barely OK.

This was good, with a sweet jelly middle. I’ll make sure to bring in my refractometer for the next one. Maybe I let it go a bit too long- it fell off over the weekend and I found it on the window sill. Before I saw it sitting there, I saw it missing and was worried that one of the cleaning staff had eaten it. I didn’t have too big a sample- sharing it 5 ways with co-workers didn’t leave a lot. But it does give me some hope that I’m growing figs for myself as well as my wife (she even likes the grocery store ones). 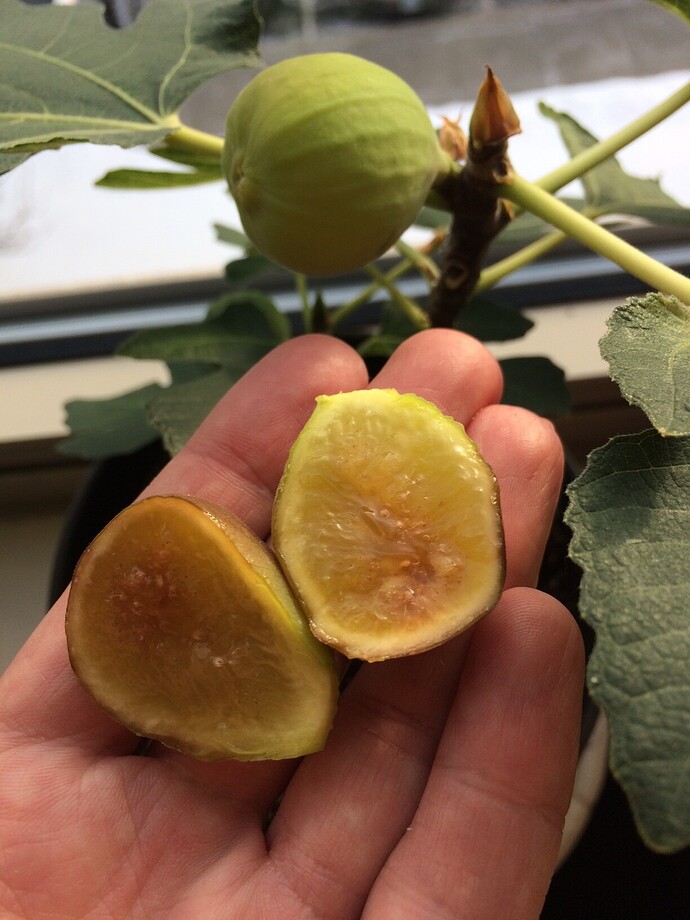 A man I know from Italy says GdSJ is his best tasting fig and he’s tried hundreds. I’ve got a plant that was sent as an airlayer. Nice plant but almost no roots. I’m hoping it hangs on.

It does look good esp for a winter fig. Nice going Bob…!!

Hate to rain on your parade, they taste good, but I eat them without looking, looks like worms on the inside.

Darn, stop naming these good figs! I have 25 plus plants already! Now I have to have one. Wow that looks so light in color, The eye is so tight, it doesn’t look like it has one in the cut pieces.
.
It doesn’t look over ripe to me, I like them as ripe as possible.
Oh figs are supposed to taste better as the tree matures, so that probably was the worst fig that tree will produce. Really I do want one now, the torture never stops!

The growing community can be great, a guy I sent some pepper seeds to happens to grow figs.He saw I needed Malta Black and Takoma Violet, both Mt Etna types that do well here, and have been praised as good ones. I want Malta Black as it like a Mt Etna type, but is on another rock, the rock of Malta. Plus my Father In Law was born in Malta. And reports from the field say it’s as hardy as hardy gets! And a very good fig. He offered me cuttings of both. I’m trying not to want Maltese Beauty. I have a guy who owes me a Maltese Falcon. I will have it in the spring.
Figs are cool, I have figs from all over. Malta, Italy, France, Portugal, Lebenon etc.
I’m going to have to rid myself of some more fig trees for sure. So many I still want to try, I somehow have to cull some out?? I can’t kill anything, well i can, but it’s like pulling teeth for me. I pulled out 10 tip rooted blackberries this year, and still think about them! How I could have maybe saved them. Talk about a tree hugger!

OK I was doing research on Gris de St. Jean and that does not look like one. Gris de St. Jean has a red interior.
I guess it’s possible it could still be? If it is Gris de St. Jean that fig is nowhere near ripe.
The ones on F4F have a center cavity, and a large eye.
http://figs4funforum.websitetoolbox.com/post/1st-grise-de-st-jean-7070045?highlight=grise+st+jean&pid=1284206957 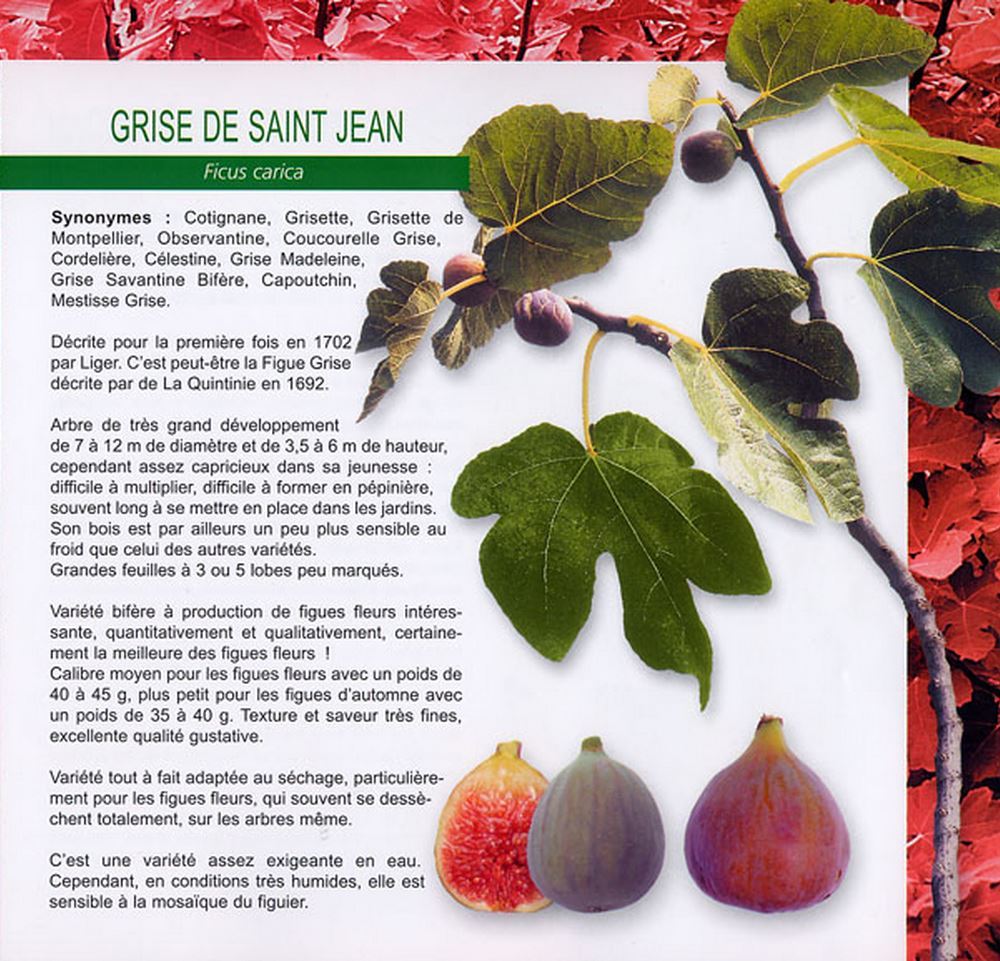 Yes, I found a photo of GdSJ, and it has grey-bluish skin and red flesh: http://tinyurl.com/GriseStJeanFB. The one on Bob’s photo looks like a honey type to me.

Do you mean that literally, or figuratively? I suppose there could be SWD which migrate indoors, but I didn’t see any, nor detect the flavor that raspberries get when infested. If you meant the latter, then I agree that some figs look a bit like that. This one seemed more solid and less stringy/seedy than most, which I liked.

He saw I needed Malta Black and Takoma Violet, both Mt Etna types

I also added Takoma Violet at the same time as the GdSJ.

I can’t kill anything, well i can, but it’s like pulling teeth for me. I pulled out 10 tip rooted blackberries this year, and still think about them!

I sometimes feel bad about that too- a couple months ago, I pulled up 6-8 Newberry tip roots and put in a bucket with dirt in case anyone would want them.

Yes, I found a thread on Gardenweb with pictures, where the inside seems much darker. Though I don’t think the outside is that far off. The one I’m holding it up against is less ripe. Here is a pic of the outside. 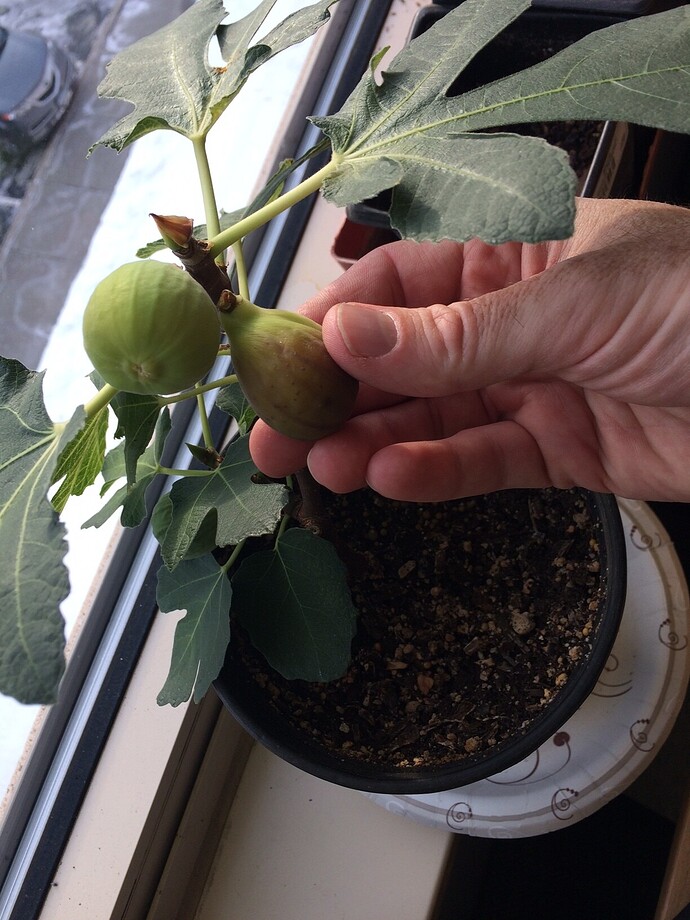 I just noticed that there is a pic in this thread (post 348), where the inside is very dark.

Hopefully it has the correct name- maybe the conditions I grew it in affected the coloration? It can’t be all that normal to grow in a window with a 1 gal pot…The whole plant is less than a foot tall. In fact, I’m thinking that after the last two figs ripen, I’ll keep it from setting any more, just so I can size up the plant. That’s one of the things I love about it- it just keeps setting figs. It set 5 figs, I thinned off 3. Then a month or so later, it set 2 more and I thinned one off.

You may be right, as the inside color seems a better match. I wonder if a lack of pollination could impact that? There seemed to be few if any seeds. Even if it turns out to be the wrong name, I want more of these

maybe the conditions I grew it in affected the coloration?

Yes, possible, and it’s good, so it doesn’t matter anyway!
And darn if I didn’t add another fig today, well cuttings. I swear I wasn’t going to grow cutting this winter, now I have 3 plants coming.
I added one that just recently hit our shores from Florence Italy
MEDICI HR black fig N.1

I agree, that’s not Gris de St Jean, but some type of honey fig. Mine is
totally different, but as long as you like it, that’s all that counts.

I think it’s fairly common for figs ripened under “strange” conditions (especially those on young plants) to exhibit “strange” physical properties. I would call ripening in January indoors on a windowsill “strange” for sure!

Here are pics and a thread about Gris de St. Jean

I suppose the leaves being a nice uniform dark green is also a strike against it being GdSJ. From the thread, GdSJ has fig mosaic virus, which gives the leaves a discoloration. The fig next to it on the window sill has lighter, much less healthy leaves.

I don’t care what it is, when in a couple years it becomes a beast, I would like cuttings.

Not all GdSJ have FMV, only the plants mentioned. FMV is not indicative
of the plant.Don’t let that deter you. GdSJ can be a very good and healthy
fig. The only point that we’re trying to make, is that you don’t have GdSJ.

Bob, I am so glad you got a good fig… and it ripened indoors-- even better! Did it get any window sunlight? Or just the office light fixtures?

PLEASE consider sending me your latest batch of Newberry starts. I nursed the ones you sent me last year, but they died in that surprise freeze we had last April. The Triple Crown blacks you sent are thriving.

Please consider sending whatever Newberry tips you can spare. Please reply in private message either way. I can comp your postage/packaging costs, or maybe send you scionwood? Let me know, thanks.

Okay. Now I see that your office fig is situated on the window sill. It must get plenty of light.

Remember in the movie “Airplane!” there is a line of people with crude weapons waiting patiently to assault one of the passengers hysterical with fear?

I’m in that line, behind Drew, waiting to commandeer cuttings from Bob’s mystery plant!

Just joking. But seriously-- Looks like Bob got a winner.

you were supposed to get acquainted with Jean(saint) but instead met Brigitte(who is no saint) , well, all that matters is you clicked!

kidding aside, many fig fruits get a little pasty in complexion when grown indoors(compared to outdoors in the desert), but your Jean seems to be too pale to be fixed inside a tanning booth.
good news here is that you liking it having ripened in winter means you loving it ripening in your summers!

I’m in that line, behind Drew, waiting to commandeer cuttings from Bob’s mystery plant!

All the more reason to size it up. Come spring, I’ll try to find a place for it in the yard, as I doubt it will put on much growth in a pot. Especially as it seems to keep fruiting. I think it may have put on two more a few weeks ago as well, which I promptly knocked off (no need to stress a 1’ tall plant further…).

Now I see that your office fig is situated on the window sill. It must get plenty of light.

Yes, it is South facing, so it gets plenty. More than most South facing windows at home, as the glass is quite large and the sill lets me get it pretty close (as office windows don’t open).

It’s a bit early to declare that after 1 fig, but it’s hard to not get excited.

many fig fruits get a little pasty in complexion when grown indoors(compared to outdoors in the desert), but your Jean seems to be too pale to be fixed inside a tanning booth.

You guys are probably right about that. I’ll keep an eye on it and try to figure out what it is.