I have limited experience with them (only one year in the ground) but my two Akane trees on M26 had quite a lot of mildew this summer. It seems to be susceptible, while the Florina tree between them (same age, same rootstock ) was entirely unaffected. This summer most of my trees were quite healthy (I don’t spray at all) so these two stood out in a negative way. May be that they need time to establish.

One of them had one apple. It was small, but not bad. The taste is one-dimensional for me.
I planted this trees because I worked on a commercial fruit farm in 2015 and I remembered that I loved this apple. I went back this summer and they weren’t half as good as I remember. They were juicy and had some sugar and some acid but I remember them with a distinct aroma, a spicyness, which was sadly absent. Maybe a case of arriving on the farm and being overwhelmed by all the fruit? Or maybe it thrives in hot and dry summers like 2015 and doesn’t like the more mild weather we had this year?
I kept hoping that my own apple would be better, but well…it wasn’t. I picked it on the 4. of September and ate it the same day. It was very nice looking but the taste was really nothing special.
I know that this is all just anecdotes and no hard facts but I am so dissapointed in Akane that I felt I had to warn you! I mean I sang it’s praises to my family for 5 years and now to admit that maybe it isn’t the best early apple ever…that is hard 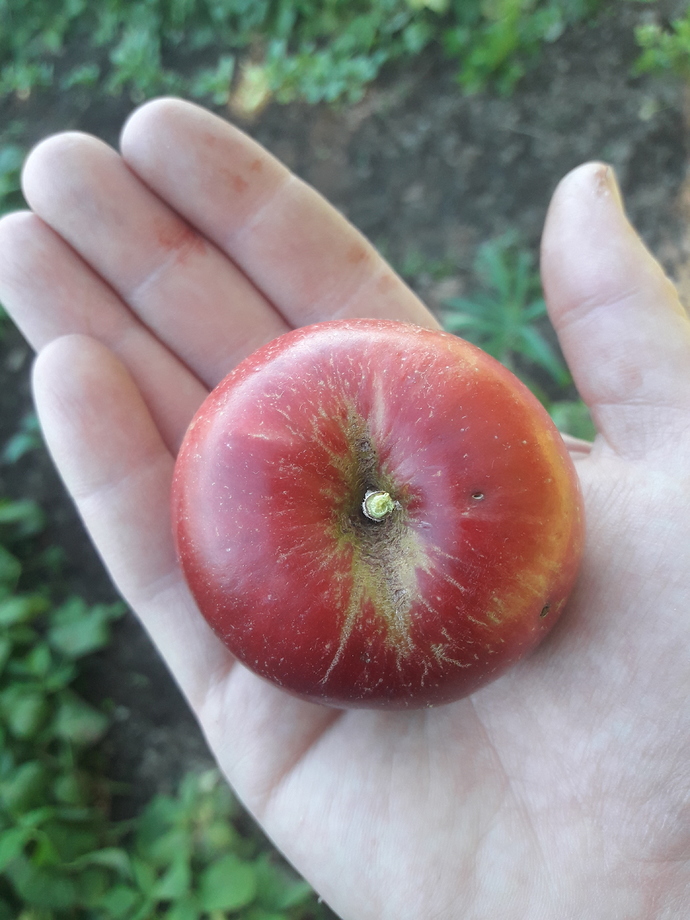 I have Akane on a multigraft. I like it. Productive, no disease for me, has some Jonathan flavor that I like.

Limited experience with Roxbury russet. I can’t say totally yet if I like it or not, but got it because of long keeping time which they do. Have two trees. One tree currently is dying back severely – I think it’s fire blight and in the main trunk. Apples have a somewhat softer texture. Keep a very long time. I don’t like them as much directly off the tree. Haven’t had enough production to get a good feel for whether I like them better after time in the fridge. I think they sweetened up but the texture was softer…which is ok, if a person isn’t hung up on store bought crisp. My profile icon pic is a roxbury. Yellow with red dots. Some of the apples are beautiful after some time. Generally green off the tree if i recall correctly, and then a shift to yellow in storage.