At the start of this summer I noticed several canes of my raspberries produced what I can only describe as mottled raspberries where the individual drupelets ripened independently from each other on each raspberry. These canes have continued to produce berries the same way through the whole summer so I am guessing it is a trait to these canes.

Unfortunately it means all the fruit from these don’t make for good eating as they are half over-ripe and half under-ripe. I am planning on taking these ones out after this season

I have mostly Heritage with some gifted raspberries of unknown varieties which I believe the mottled ones are my mystery ones.

Anyone have experience with this and where it comes from? Is it a trait of a certain variety? Or disease? 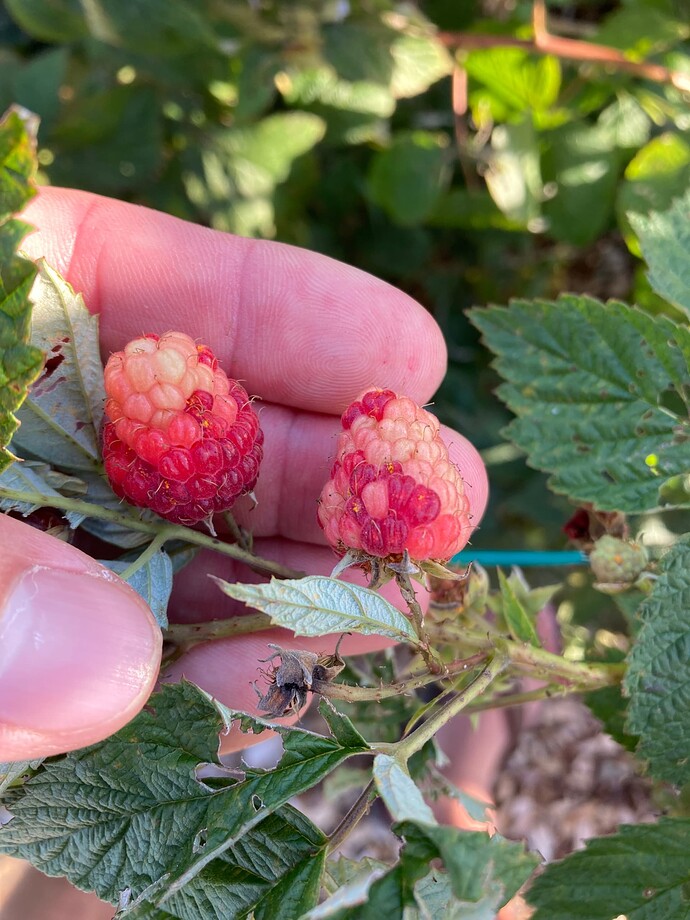 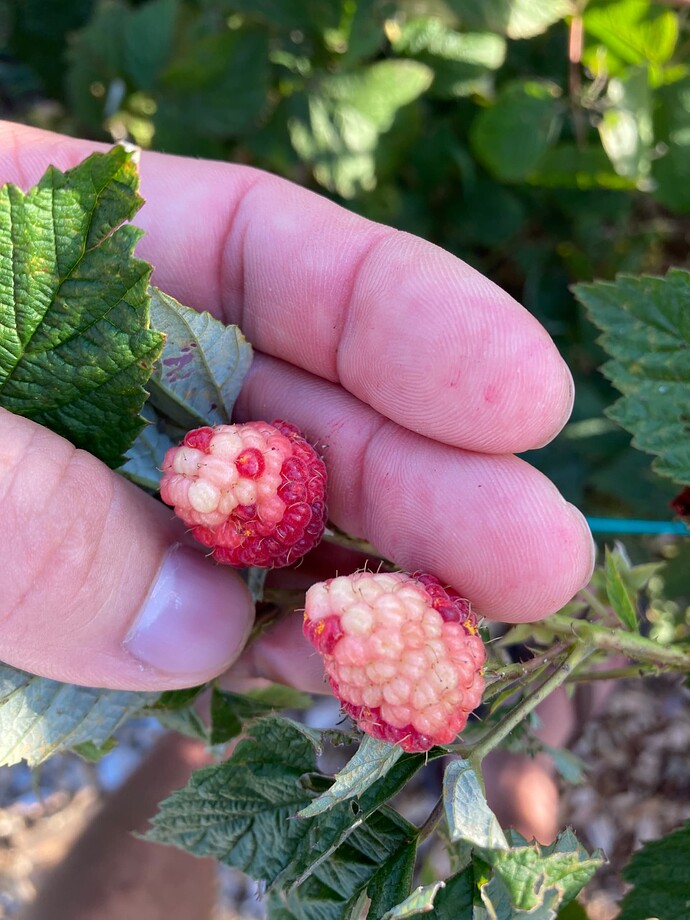 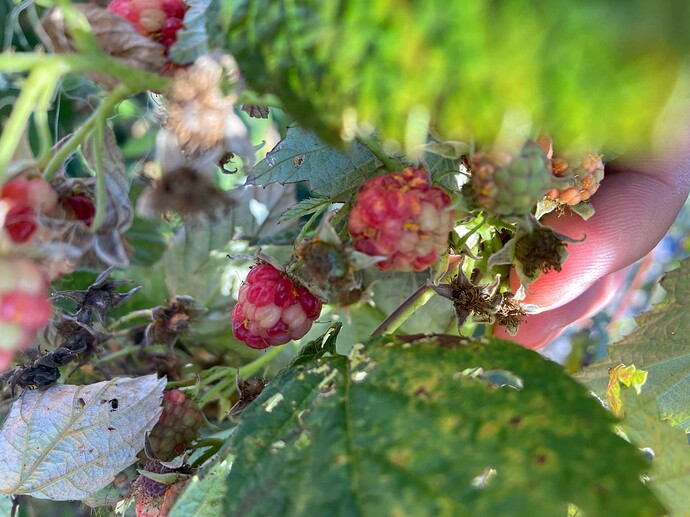 It looks like white drupelet disorder, usually from sunscald and lots of UV (full afternoon sun in hot weather with little humidity); they are still edible but just look different. somewhat common in raspberries (and blackberries).

which variety is this? “Caroline” is supposed to be more at risk.

it can also be from insects if the white drupelet pattern is more random and not in a big block area. 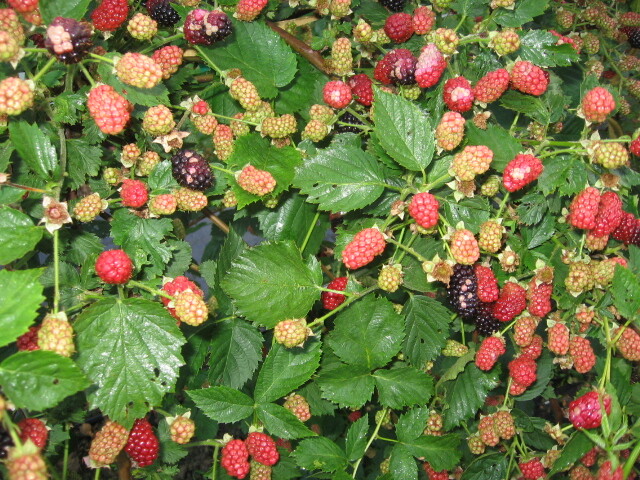 Conditions are favorable for white drupelets occurring on blackberry and raspberry fruit this week. I have already gotten calls this morning and expect more as the day goes on. Here is a great explanation of White Drupelet from UC...

Unfortunately I don’t know what variety it is occurring on, the cans that do this were gifted to me. I also don’t believe it is sunscald, the canes that do this have produced every berry this way when it is sunny or not. Also the pattern is not a ‘blotch’ like sunscald but random across the whole berry 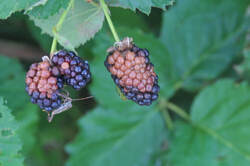 Tan or White Drupelets on Blackberry and Raspberry Fruit

Blackberry and raspberry fruit will often develop white or tan drupelets on the berry. Though we are not completely sure of the cause in all cases, two commonly given reasons are stinkbug damage and...

do you have a stinkbug problem or red mites?

there are videos about homemade stinkbug traps running lights outside 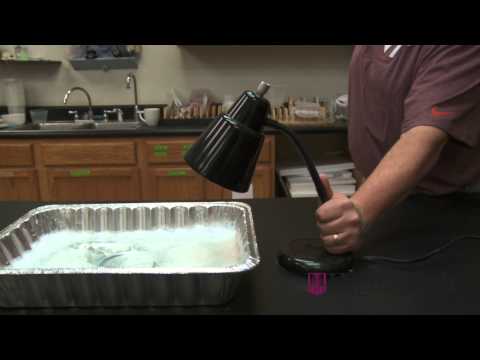 I have loganberries in a morning sun only location and they love it, thrive and fruit like crazy.

A very detailed article form Hort Science … they were looking at 3 different blackberry varieties.
I noticed in their conclusions it was mentioned that increasing nitrogen helped with HR’s.

If you have a good morning sun only location, I would bet on that working. 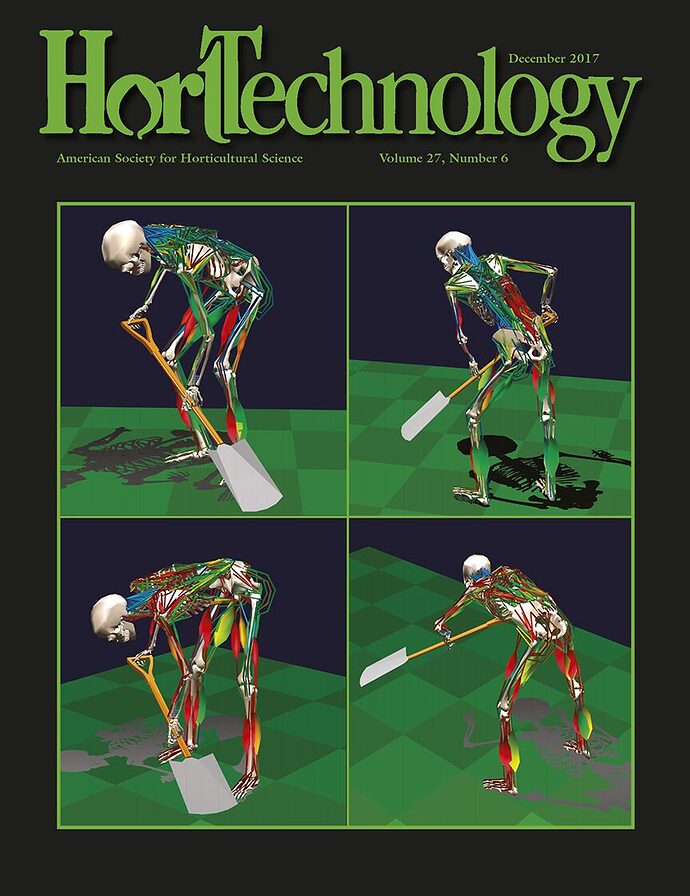 White drupelet disorder (WDD) is a problem that occurs during the ripening stage in some blackberry (Rubus subgenus Rubus) cultivars. Although berries affected with a few white drupelets may taste fine, they are unpleasant aesthetically, and this may...

Our results show the importance of environmental factors on WDD occurrence. However, more research is needed to discover the underlying causes of WDD. Plant nutrition is another area to be explored as a potential modifier of WDD manifestation as suggested by Quezada et al. (2007) who found that white drupelets decreased with an increase in nitrogen application rate in ‘Heritage’ red raspberry (Rubus ideaus). This study showed that potentially up to 22% of berries in a certain cultivar could be affected by this disorder. Rain and the shadecloth treatment decreased symptoms of WDD in this study; therefore, overhead irrigation and shade may correspondingly reduce WDD symptoms.

Got some good ones and a few tiny strawberries (eversweet). 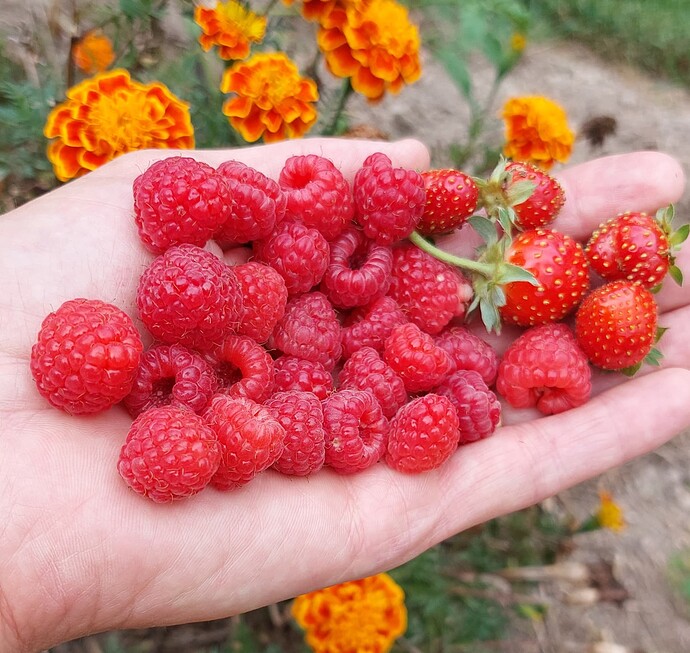 All those nice berries i collected from the east and north sides of my raspberry patch. 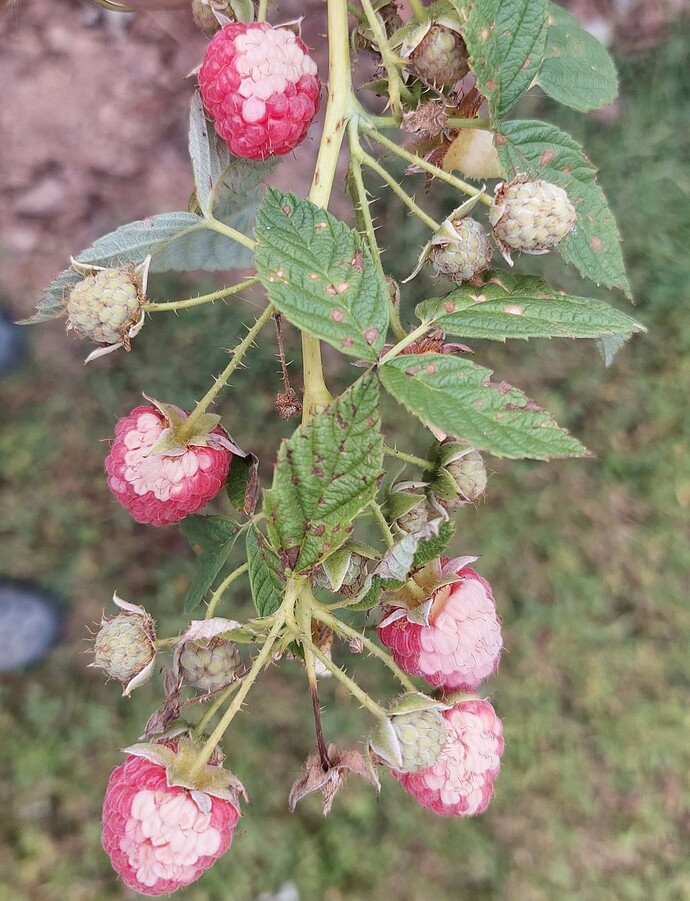 I found this cluster of berries on the southwest side…

We got freakishly hot here yeaterday… near 100.
Sun was beaming… very hot.

Too much for those HRs that were on the sunny side.

Mine have never turned white in the spring harvest… mine ripen from May 22 or so until end of June the first crop.

Note that redberry mites are very pale in color and are microscopic, unlike several species of red (colored) mites that can be seen with the naked eye.

It looks like the rest of the drupes are turning red too, just a bit later. It could be a pollination issue. If the bees skipped a few days during pollination the different parts of the berry got pollinated on diffrent days.

That is correct. The drupelets on the berries ripen independently from each other

Kinda looks neat but not good for eating

I’ve never heard of eversweet strawbs. How are they?

I hope it is not mites - how does one test / confirm for microscopic mites?

microscope would be definitive but most detect it by the berry and plant appearance
“For most species their presence is readily detected by the distinctive abnormal plant growths induced by their feeding activities. The red berry mite is unusual for these mites in that it doesn’t cause galling.”

Information about managing pests of gardens and landscapes, from UC IPM.

Information about managing pests of gardens and landscapes, from UC IPM.

Do you have blackberries as well in close proximity? redberry mites favor blackberries and per California extension " Note that [redberry mite (Phyllocoptes gracilis ) causes similar damage to fruit of blackberry and rarely raspberry" and the drupelets turn firm, sour, and red (instead of black) in blackberries

If you dont think it is sunscald, and not stinkbugs, then it seems like mites and more likely it is a dryberry mite

spray and dont let them overwinter

Mite feeding causes drupelets to become dry and hard and fail to develop their mature color. This makes berries unappetizing. Mite feeding can also cause yellow leaf spots that become reddish and necrotic. Note that redberry mite (Phyllocoptes gracilis) causes similar damage to fruit of blackberry and rarely raspberry and can also be managed as below.

Predaceous mites such as Phytoseiulus persimilis may help to reduce the abundance of dryberry mite and redberry mite. To improve the potential effectiveness of biological control, control ants, minimize dust (e.g., periodically hose off plants), and avoid the application of broad-spectrum, persistent insecticides and miticides for all caneberry pests. See Protecting Natural Enemies and Pollinators for more suggestions.

At the time mite damage to fruit becomes apparent, it is too late for control to be effective. If fruit damage the previous season was intolerable, spray a micronized or wettable sulfur on buds and terminals at the delayed-dormant stage, after buds swell but just before they open. This is the time when the overwintered mites become active and miticide application can be most effective. Azadirachtin, narrow-range or horticultural oil, or neem oil can be sprayed at two to three week intervals after the green fruit stage. Do not apply oil within 1 month before or after a sulfur application and vice versa or plant damage can occur. 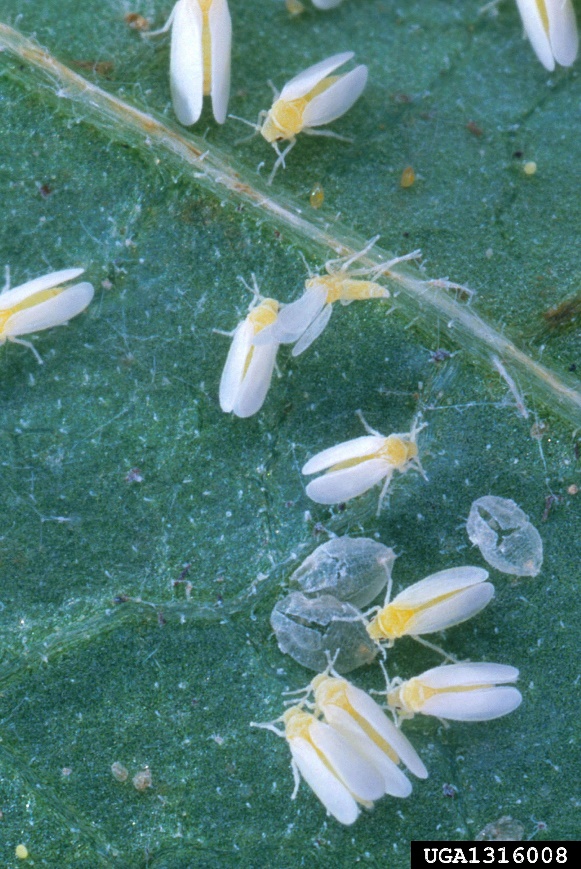 If you are looking for a safe, effective, and low toxicity alternative to more toxic pesticides to control many undesirable insects in your garden,... 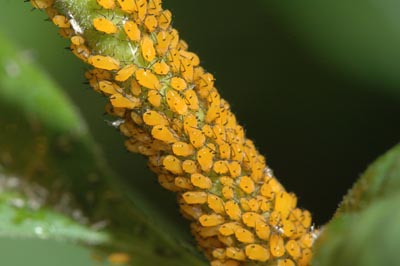 Coming clean on soap in the garden

The combination of dish soap and water is often referred to as the holy grail for managing insects from aphids to Japanese beetles. Does it work?

@CWC … on the eversweet strawberries… 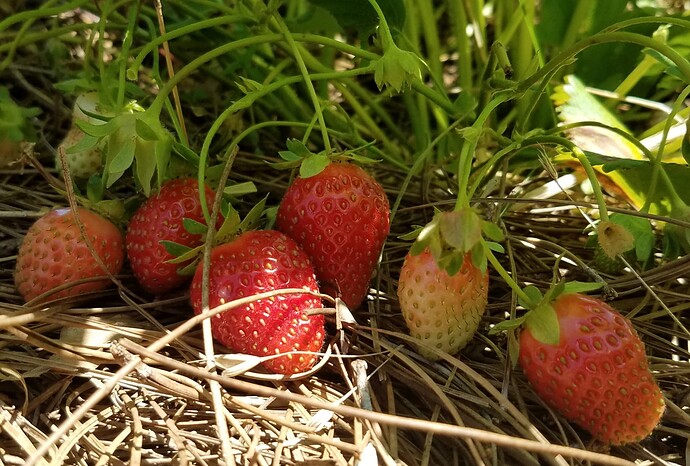 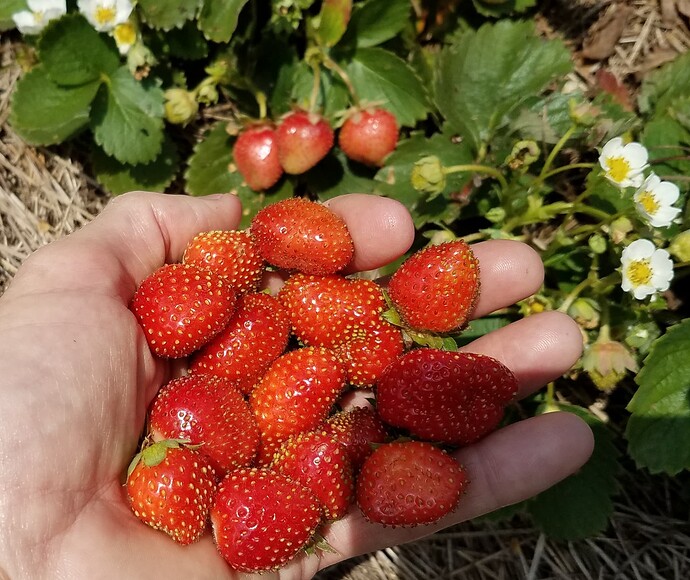 They are one of two everbearing types that i have growing in my food forest bed … in between and under fruit treees and berry bushes… on the south west side. The other is seascape.

I also have a june bearer in the mix… sure crop.

The pics above are of eversweet.

Our extreme July this year shut them down for a while… but then in August it cooled off some and rained more and they started producing again. They produce early… ate my first strawberry on April 30 this year… a eversweet… and we are still getting a few now in september…
I am sure they will continue into october… usually do.

They are not a heavy producer… but are a steady and persistent producer… more of a everbearing strawberry than any other everbearer i have tried so far.

They are not big… as i grow them… more med to small sized… the flavor is good… taste just like you would expect a strawberry to taste like.

In my food forest bed setting… they are planted… and mulched… get a little organic fert in the spring… but they get no special care past that. No water… no protection…

If you had this variety planted in a nice raised bed… where you could irrigate as needed and give them more attention … i am sure you would get more and larger berries than i have.

That is one of my hopes for the future… some nice raissd beds dedicated to strawberries that i can water easily.

Update on this - I believe the issue is Rust (very possibly Late Leaf Rust ) I had noticed the yellow spots on the affected berries early on, but I thought it was just pollen at the time. I have now noticed that these yellow spots have spread to more raspberry canes and after a little research it is clear that I have Rust spreading through my raspberry patch. It looks like the canes with the worst Rust infection have the issues with the berries not ripening evenly so I am thinking that is the cause. I am going to let it ride until the end of the berries for the year and then try to hit everything with a fungicide.

I am not aware of rust causing mottling - do you have a white spruce on the property or close by?

I don’t believe so, my property is surrounded by fields but these canes were given to me from a property that very well could have, I think I brought the rust in when I planted them