I have almost entirely lurked on this wonderful board, sucking-up valuable expertise while contributing nothing in return. (Very sad, I know…)

However, a passing fit of enthusiasm has inspired me to share these images with the forum. (Actually, I was Googling some of the featured selections and came-upon some very interesting mulberry discussions on this board, and it occurred to me that the resident Morus-aficionados might find them interesting.)

These images were taken at the Wolfskill Experimental Orchard in Winters, CA (AKA USDA/NCGR Davis), where a public mulberry and early stone-fruit tasting was held this past Saturday. Sadly, I was unable to attend, but a number of regional CRFG’ers made the trip, and one of them captured these images and gave me permission to post them here.

On our local CRFG chapter discussion group, four people have so far named their favorite selections. (Totally random and anecdotal, of course.)

Is “Easter Egg” really that good? A pure M. alba selection? I am dubious, and wonder whether its visual distinctiveness (compared against the others) might have entranced people. But, anyway, I wasn’t at the event and act merely as a humble messenger.

One other note: Boy, I’ve gotta give the Wolfskill staff 100/100 points for presentation! Those mulberry bowls are picture-perfect, and indeed look ready to be featured in the pages of glossy and peaceful lifestyle magazines. 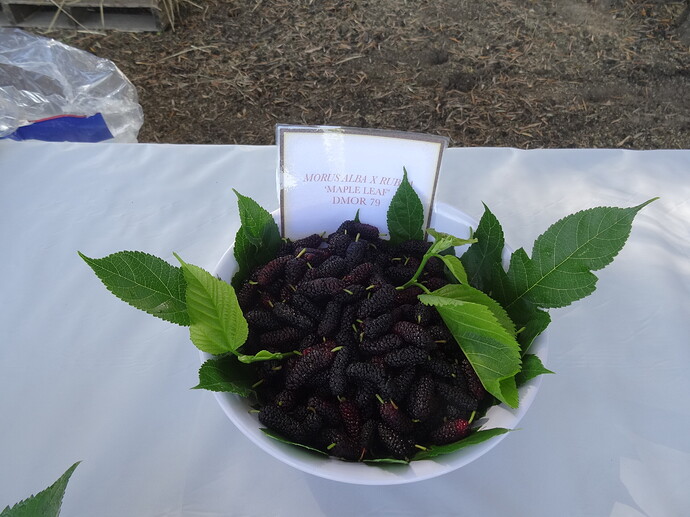 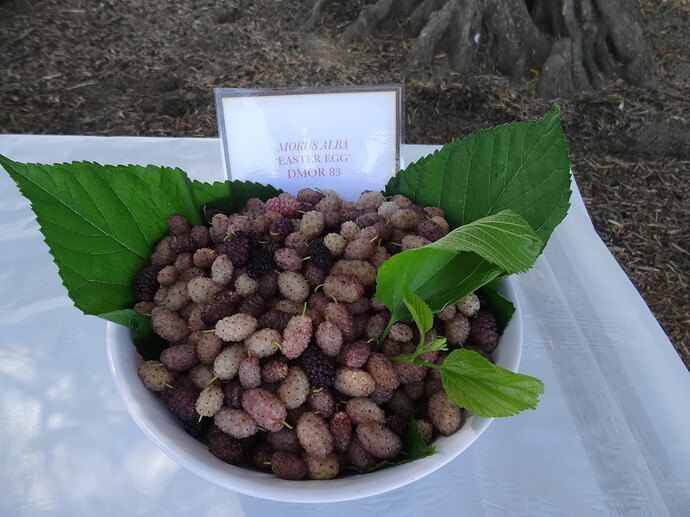 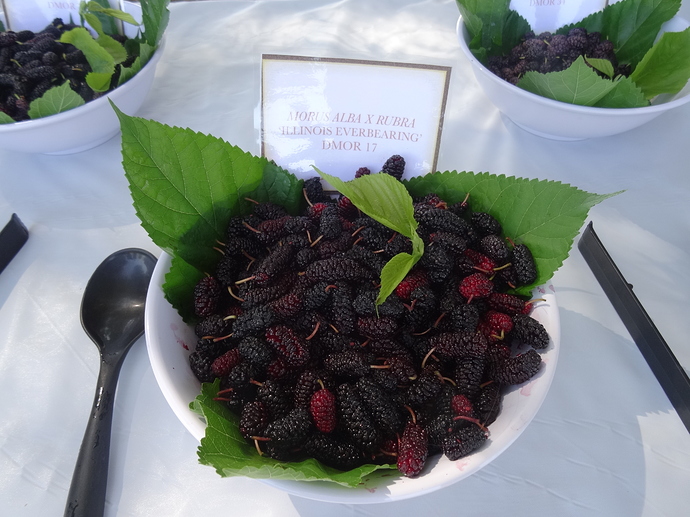 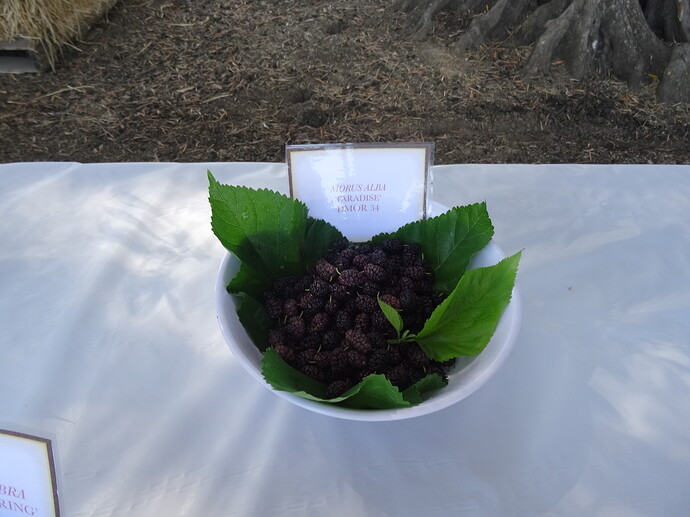 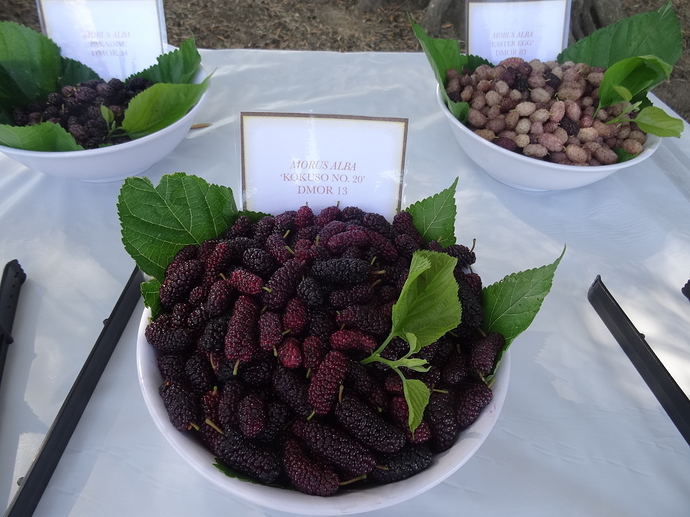 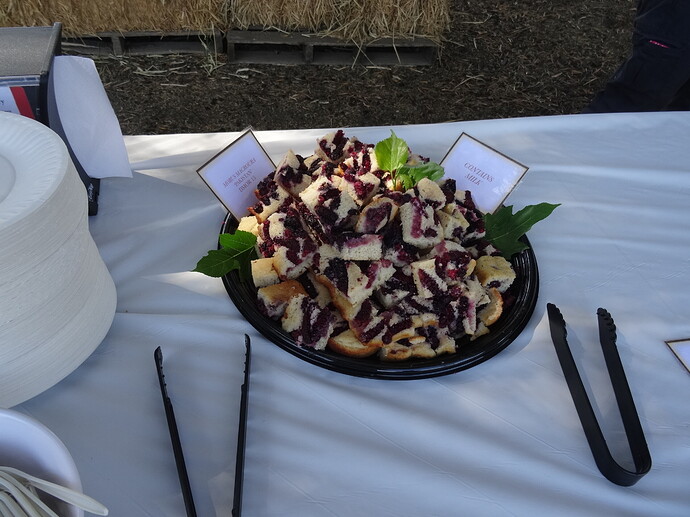 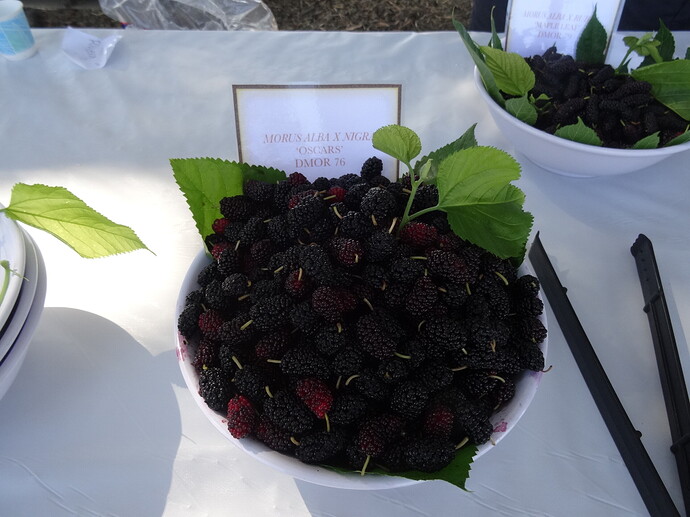 Very nice thanks for posting that information!

MAN!! Just beautiful…I am so much more excited even than I was already to get my two little ole’ Illinois Everbearing Mulberry trees now!! Should be here by Friday…Planted this weekend and hopefully on their way to many , many beautiful crops of YUMMY Mulberries! Thanks for posting…

Lurking is fine, but if you have more nice stuff like this to share in the future, we hope you will.

Can you buy easter egg somewhere? My searches are just pulling up garbage.

I’d like to grow a mulberry, but the dwarf mulberry I’ve tried just dies in spring 2 years running and I’ve read on here that it tastes bad for a mulberry. I’m probably too far north for a real nigra, too.

Ha, I will try to be more responsible in future! But, to be honest, there are few things that come down the pike more enticing than this stuff … practically mulberry pornography.

Quite possibly not. Many accessions at Wolfskill are not commercially available.

The staff at Wolfskill used to send propagation material to members of the general public quite freely, but now, due to funding and staffing limitations, they are much more restrictive. (No longer will they send cuttings/scions to anyone who asks.)

My (anecdotal) impression is that university/college horticulture departments are still able to obtain germplasm fairly easily. So I think one possible route by which hobbyists might be able to obtain desired cultivars might be to partner (through Master Gardeners, area garden clubs, etc.) with local horticulture departments to establish regional mini-germplasm repository orchards. Obviously, time and effort would be required to build such partnerships. (Equally obviously, it would probably not be a good idea to send your local community college horticulture department a laundry list of desired accessions as a demand. Not that I’m implying anybody here would do such a thing!)

That is probably a lot more information than you actually wanted, but the question (how to get germplasm from Wolfskill) does tend to come up. (Other USDA repositories may supply material more freely … they all seem to set their own policies.)

As I said in my initial message, I wouldn’t make too much of “Easter Egg” seeming to be such a favorite … I think it is probably some weird, quirky fluke.

“Illinois Everbearing” is common but great! At another Wolfskill mulberry tasting that I attended a few years ago they had more selections on offer (perhaps ten or twelve), including (I think) “Thomson”, “Rupp’s Roumanian” (sp?), “Beautiful Day”, and most of the ones at Saturday’s tasting. (Though not “Easter Egg”, which I would have remembered … a curious name for a mulberry.) I clearly remember that the two bowls that got stripped to the very bottom (no leftovers, and there were leftovers of the other selections at the end of the event) contained “Illinois Everbearing” and “Pakistan”!

(No Morus nigra at either tasting, as they ripen mid-summer – but note that M. nigra is a much more acidic sweet/tart fruit, and might not seem the “very best” mulberry to all palates.)

i, too, watch it all the time. Needless to say-- it turns me on

(No Morus nigra at either tasting, as they ripen mid-summer
[/quote]

the above three are our faves too.

Wolfskill is an amazing resource for mulberries. Jenny Smith (Agricultural Research Science Technician over the mulberries) told me that all their cultivars are grown on their own roots. She has a wealth of information stored in her brain that I would love to make available to the world. Don’t get we wrong…their ARS GRIN taxonomy information, and their annual tasting event is fantastic, but they hardly have a mention of mulberry on their website. I was hoping to get Jenny excited and involved in putting all her years of hard work into web and Youtube formats for all to see; I have done extensive video editing and wanted to make her a star…but I was passed off to her research leader, citing that she was swamped…which may be true, but nevertheless, I was disappointed (he only offered to give me a tour).
P.S. Don’t take their ‘Oscars’ Morus alba X nigra photo too seriously…I doubt that it is a cross between a nigra.

Great pics, thanks Ashok! And good to hear from you again, its been awhile…

I will have my first non-trivial mulberry harvest soon, IE, Rupps and Kokuso.

So what are the best tasting mulberries besides nigra that yield well but don’t grow too rapidly? Those all look great but how do they taste?

I was at the tasting and Maple Leaf and Oscar’s were my favorites. Easter Egg was good too, but I’ve had better Morus alba. Illinois Everbearing was the only one I didn’t enjoy - quite sour - maybe picked too early. I’m wondering now if “Oscar’s” is the same as the “Oscar” that many people have.

what are the best tasting mulberries besides nigra that yield well but don’t grow too rapidly?

have grown more than 10 varieties of mulbs and culled through that list over the years. True nigras and gerardi’s are the slowest growing. As in snail’s pace. Pak’s can grow 8 feet in one season, but seem amenable to pruning like jujubes and blackberries. Pinching the apical buds of the uprights(or primocane equivalent), thickens the laterals(floricanes). We have removed apical growth on our pak’s upright stems at about 8 feet and the laterals have been very busy in production the past three years.

IE tastes better than pak in our opinion, but the size of pak berries, early ripening, and manageable growth(by pruning)have earned paks a reprieve. Paks are unique in a way that even though not strongly-flavored as other mulbs, the mild berry flavor is not at all dull nor muted. Otherwise we’d probably just be growing nigras.

Gerardi’s at their prime are at least as good as paks with some tartness, and quite productive. But still notches below nigras.

I appreciate your input on why you prefer certain mulberries…as it isn’t always just about taste.Heading off this thread, Ashok had stated that “Easter Egg” (could be the same as ‘Sweet Lavender’) was a favorite of his local CRFG chapter. But without weighing all the factors taste alone isn’t everything.

So are Paks nigra, albas, or their own species?

Yes, I believe that Jenny Smith managed the tasting and also baked the pictured cake. Pretty great! Let’s hope that she takes you up on your offer at some future point!

Yeah, I was wondering about that “Alba X Nigra” card … but, of course, I wouldn’t want to argue with the experts. I will say that (anecdotally) “Oscars” seems to be pretty popular within CRFG circles. (But perhaps less-known outside of California?)

(I would assume that some people are calling the same clone “Oscar.”)

The issue that always comes up at these kind of tastings is that cultivars at different stages of ripening development are put into competition against each other. (Under-ripe vs. perfectly ripe vs. over-ripe.) It makes sense to me that “Illinois Everbearing” might be ripening a bit behind schedule this year, because, honestly, otherwise it probably would have been more of a clear favorite. (Ripening behind schedule for Wolfskill, that is … in my garden they are still green, but the plant is trying to ripen them in an overly crowded and shady location, not in an open orchard in the Central Valley.)

(For comparison, “Pakistan” is ripening now in my location, in a similarly over-shady micro-location, though the cursed squirrels and roof-rats are taking them all.)

I think “Easter Egg” just happened to capture the fancy of most of the very few people who attended the tasting AND decided to respond to my request for their observations.

are Paks nigra, albas, or their own species?

they are definitely not nigras. Some say they are albas, while others say they are their own species ‘macroura’.

will have to leave it to the taxonomists and geneticists to say which is what. For the regular joe’s purposes(like myself), it is nice to know that it can be grafted to weedy and cold-hardy albas.

size of pak berries and earliness, as well as manageable size of tree were reasons why we still have them. The disadvantage with being too early is that paks seem tender to late frosts.

gerardi’s ripen at about the same time as nigras, so while we still have a couple specimens, we’re no longer eager to add to our collection. As for nigras, we now have 8 trees, yet still tempted to buy more each time we see them on sale. No doubt, persian mulbs still elicit in us a great deal of greed — if not lust

taste is quite subjective, and know people who like certain white mulberries and this is good since nigras aren’t exactly cosmopolitan, whereas whites can grow in almost the entire continental usa[quote=“Livinginawe, post:14, topic:11279”]
weighing all the factors taste alone isn’t everything.
[/quote]

yes, the density of fruiting of nigras relative to size, apart from the manageable size is what clinched it for us.
IE’s, shangrilas, and other albas may have quality fruits, but the vigorous growth and long internodes of most albas/hybrids are their cons.