I would like to plant a few mulberry trees and was hoping some of you brilliant people could give me variety recommendations. I live in zone 8a so I am able to grow all the different species.

Also, how difficult are mulberries to root from cuttings? I have a lot of experience rooting figs but have never tried anything else.

I don’t have experience with varieties to suggest, though I’ve read good things about Pakistan. I think you’ll be fine growing it in your climate, it’s not too cold hardy.

As far as rooting, it seems to be variety (species/hybridization?) specific. Some root readily, others don’t. I was just emailing another forum user and he shared this me on his rooting success: “Kokuso No. 20 and Shangri La have rooted pretty easily. Illinois Everbearing I have had limited luck rooting, but a couple takes. Geraldi Dwarf I never got a cutting to take.”

I have a friend who grows mulberries in WI. I arrived when ripe so we tasted the different ones he had. I recall ‘Illinois’ was the sweetest out of what he was growing in WI. I was impressed with the flavor compared to the others he had.

IE is easily the most popular of the cold-hardy mulbs, and for good reason. Worth growing if you’re in a cold/foggy region and you’re fine with fast-growing and hefty trees.

Thanks for the info!

What about some of the white varieties?

Also, are the morus nigra varieties really better than the others as some claim?

are the morus nigra varieties really better than the others as some claim?

i am one of those claimants. We’ve tried a dozen mulb varieties, and nigra’s are a distant michael jordan. A bonafide bombshell.

i wish it was more tolerant of colder, balmy regions. Almost rude/snobbish to bring it up with people who can’t grow it…
also wish could ship a few berries to people who’ve never tasted it.

incidentally, i see you’re in AZ, do you have star nursery there? Star nurser is the only one which offer nigra’s as 8 footers here in nv, and presume they offer it there as well.

Looks like we do not have Star Nursery in AZ, which is really unfortunate because an 8 ft tree would be a great start!

In your opinion, is there a reason to even grow alba, rubra, or others if nigra does okay in my climate?

because an 8 ft tree would be a great start!

with nigra’s you’re much better off with large old specimens, as the stems need a long period of seasoning(could be >3 yrs here in vegas), on top of being slow-growers(more stems= more buds, and more buds= more berries) I don’t donate nigra scion wood anymore, not to selfishness, but would rather advise folks to buy grafted specimens-- the largest ones they could ask from a nursery, as that would help cut down waiting time. Starting with a specimen grafted last year is much better than starting with a budwood this year. If your grafts fail, you’d be set back one year automatically. Additionally, older nigra grafts are more cold-hardy than recently grafted ones

is there a reason to even grow alba, rubra, or others if nigra does okay in my climate?

absolutely! Nigra’s are a bit late, usually ripening around ripening of apricots

paks and certain dwarfs as gerardi or everbearing ripen earlier, and are good enough substitutes if still waiting for your nigras. 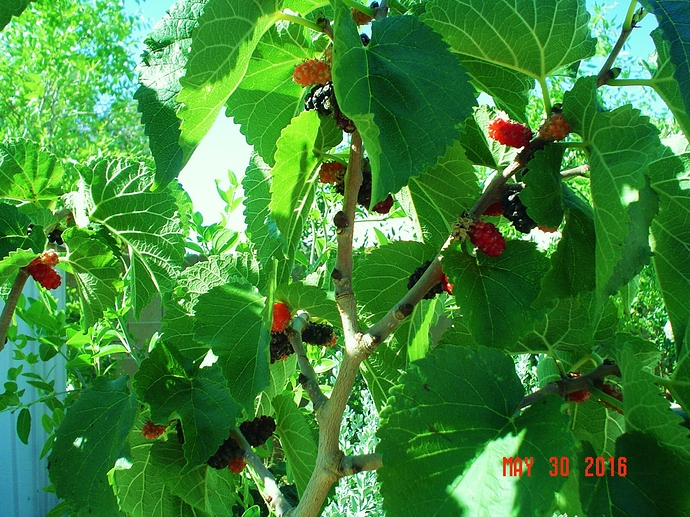 you could also refer to http://www.growingmulberry.org/ which was hosted by one of the members here specifically to advise people about isolating nigras from the rest.

Would it be a waste of time to grow a nigra in a container?

i see you’re in PA. It is probably the only way of growing it there so you could bring it in your garage/greenhouse when it gets really cold. If you could give it full sun during summer, it might be worth it.
It also grows slowly, so it will do well in a pot. One of the totally out-of-zone mulb aficionados here,-- @Chills has a potted one in MI, and if remember it right, he’s had it for years, but his seems not very productive and is excruciatingly slow growing, BUT at least still alive and bearing some fruits, which is no ordinary feat! Could be the short growing season there, so my only tip might be full sun for as much as you could give it during warm weather. If you have a wide yard, place it in the sunniest spot during spring and summer, and bring it in before it gets really cold so it could still continue photosynthesis indoors placed by a sunny south-facing window for a couple months more before placing in a garage. Even better is if you have friends who have growhouses for pot, nigra’s would appreciate bunking with its (distant)cousins, and just keep it there for an additional two months of full-blast photosynthesis, then gradually wean it into colder weather and placed in your garage to go dormant. It is still a deciduous tree despite its love for sun and heat, but only needs a couple hundred hrs chilling time, maybe even just 100-150.

at 20$/lb for the berries, it is probably the next best thing to growing pot, and no need to worry about narc police

Persian mulberries are equal parts delicious and mysterious-partially because they go for $20 per pound. One reason for their high price is that for size-to-flavor ratio, the Persian mulberry (aka black mulberry or Morus nigra) can't be beat.

Will if @Chills gets enough fruit and they’re that good, I may add one!

I get a couple good handfuls a summer, spread out over a couple weeks. So, 1-3 berries at a time for a total of somewhere between 15 - 25 berries. Next year I will repot it (it’s been 5-6 years since I last did) and will fertilize it heavily to see if I can get more growth.

It over winters in my “canning room” in the basement. Temps stay in the high 20’s-low 30’s from now until April. Most years it goes outside by the end of April and its buds are swelling.

What sized pot is it in/moving it into?

Yup! It wouldn’t be that hard, Nate, haha. Although a 1000 is a bit of an understatement

Hi Nate
Two varieties that I have seem to root easily but not as easily as figs. I also live in 8a in Dallas Texas
Greg

Soilless mix was growing mushrooms last year. I figure it’s pretty broken down and could use a repotting.

In SE TX I grew Pakistan and Persian. Pakistan has impressively huge and tasty fruit. Persian, I think, had a lovelier sweet/tart balance. I’m trying to root a couple of the hardier mulbs this year. In 5-10 yrs I’ll find out if the improved northern varieties are worth it…if not, hopefully they’ll distract the birds!