Has anyone tried planting multiple peach / apple trees in a single location? The following video from DWN is quite interesting:

Anyone try this? Curious how well it works and if you need dwarfs to pull this off. I have a perfect spot to try this but don’t want to spend $60 on trees if it’s not going to work.

I usually see this done with similar types of trees–like all stone fruits, all apples, etc. @bleedingdirt has a couple 2 in 1 plantings with pictures on this site.

Also, in some of Dave Wilson’s summer pruning videos they show how to prune mature 3-in-1 plantings. Tom always stresses keeping the center open and pruning back the more vigorous varieties aggressively. The most vigorous growers should go on the north side of the planting.

Works great in California where summers are dry and disease pressure is low. How about folks elsewhere?

How well would full sized or semi dwarf trees do? This looks like fun.

For the last two years, I’ve done it about 3 times. I wait for a branch to grow about 24 inches and then prune it by a 1/3 each time. It’s really enjoyable as there isn’t much to prune. I just drop the branches on top of the mulch so no cleanup needed either.

I’ll be doing something similar with three pawpaw trees. I don’t think they’ll all go in the same hole, but will be closely spaced. Will probably be planting them this weekend.

I think @scottfsmith has done some multi-tree in same hole plantings.

@bleedingdirt is correct that it is not nearly so easy outside of places with low disease pressure. You need to limit the number of scaffolds much more. In my hedgerows I have many Y-shaped trees, two scaffolds. For the 3- or 4-in-1 as they get bigger each tree has only one scaffold heading out from the center - think of the multiple trees as one tree when pruning, not multiple trees. You would think the trees might tip over with only one scaffold heading out, but the roots are all entangled and keep the other trees upright. It took me several years of trial and error to figure out how to prune these, but I more or less have it going now.

I’m trying it for the first time this year with pluots. I removed a dying hawthorn tree/bush in my front yard and planted these in its place. 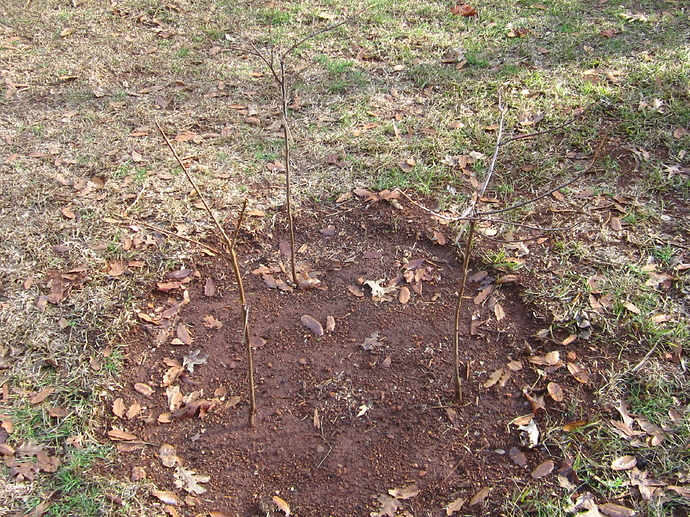 Scott,
About how many pieces of fruit can grow on one of those 4-in-1,say Plum trees,when mature? Brady

About how many pieces of fruit can grow on one of those 4-in-1,say Plum trees,when mature?

Production will be about the same as one tree in the same spot. Basically it’s the same as grafting 2-4 varieties on one tree. Like a single tree the bigger you let it/them get the more potential production.

“darwinian” shotgun plantings work extremely well in the wide-open mojave too, where land is dirt-cheap(literally and figuratively), because ~50% or more will get roasted or will simply runt out come july or aug, and then another 50% of those that survived and grew some branches during summer will freeze-dry and die-back into runts, or outright perish come december/jan, ouch!

Do you know if there are advantages of 3/4-in-one plantings over multi-budded trees? One possible advantage I thought about is that you could get what is effectively a “single” tree without worrying about graft incompatibility or interstems. Dave Wilson’s recommends using the same or similar rootstocks though, so maybe this doesn’t apply. Do you get better growth due to the additional roots from the other rootstocks?

Do you know if there are advantages of 3/4-in-one plantings over multi-budded trees?

Well for me I prefer the multi-budded tree. It’s easier to maintain scaffolds, although some cultivars grow like crazy. It’s important to have have aggressive growers on the north side, or east side. I worry about overcrowding and fungal problems with the 3/4-in-one plantings. Plus for me I start with a base tree and add the grafts, and the scion is pretty much free. I guess if you wanted a lot of different types of trees the 3/4-in-one plantings would be better. I don’t really care or need to do that. Plus I find it easier to replace a cultivar if I don’t like it. Just graft something else there. Trying to remove one tree in a multi-tree planting would be near impossible, although here too you could graft another cultivar on.
Still it is the same thing, and one could do it either way.

In my mind the only minus is the cost of more trees. For the inexperienced pruning can be difficult to get the hang of to keep things open enough, and some people don’t like the looks of the 4-in-1 in their yards.

The positives include four roots so if you have one bad root you still have a tree, the ability to make your 4-way from almost any four varieties with no work (but do make sure the rootstock has the same vigor). One other thing I really have liked about the hedge plantings is I started with many varieties at 2-3’ and the ones I like less I just chop down and let ones next to it that I like more take over that space. I have some peach trees still at 3’ spacing and some with 8-10’ around them now due to removal of neighbors.

IMO the main advantage to several trees per hole falls to DWN, they sell more trees. But there are advantages to the grower. Many of the varieties are patented so can’t legally be grafted onto a single tree by grower. It’s a good way to get more varieties into a small space. It allows an even start for all varieties.

The method works but I’ve preferred close hedgerows. Just planted a buddies 100 tree orchard at 3ft by 6ft. That makes more sense to me for an orchard. Multiple trees per hole fits landscape plantings with irregular areas.

I would have recommended 4ft by 8ft for the new orchard. But cost and availability of various inputs dictated the closer spacing. The trees were free: cuttings of figs and seedlings of stone fruit. Fencing, bird netting, weed barrier, drip line, etc aren’t. So lots of considerations go into tree spacing.

Some really good info here, thanks! I’m a backyard grower so to me a certain amount of aesthetics counts. It has to look good, or at least look OK. Mostly for the wife, and also space for my dog. I don’t want to crowd out his running room. When he is older I can take more of the space up, if I still live here.

I should say that like fruitnut I am also a bigger fan of the hedgerows compared to the n-in-1 method. n-in-1 is good for a few trees but if you want to put in more the hedgerow is the easiest to manage. Currently my only 3-in-1 is my three pecan trees, I have room for only one pecan canopy since they are so big. I also have a few nectarines as 2-in-1’s, they are planted in a row with 5’ spacing but since I expect many of these nectarines will be a bust I put two in one spot expecting one may be removed. The hedgerows look very nice whereas the n-in-1 are a bit odd-looking in a yard.

I do wider row spacing between hedgerows, 10-12’. I need this for good air circulation in my climate, and it also makes the pruning easier.

Pros and cons about multi-grafted vs 4 in a hole or closed row planting trees like Fruitnut. Five years ago I had a two peach trees with at least 10 varieties of top picked stone fruits grafted on them. Last Winter the cold came way too early in November with the polar vortex with -12F temp and killed both trees. I lost all those varieties in one cold spell. I tried this method to save space but it backed fire on me. If I had the 4 and 1 in a hole or close planting, some of the trees might still be alive? Now I have to graft like mad this Spring to recover all the lost varieties. It sucks.