My Musa “Pisang Ceylon” (aka Improved Mysore) fruited last summer. Here’s the pup I chose to keep after cutting down the former stalk. It fruited at about the height of the roof, and I expect next year it will do the same thing. 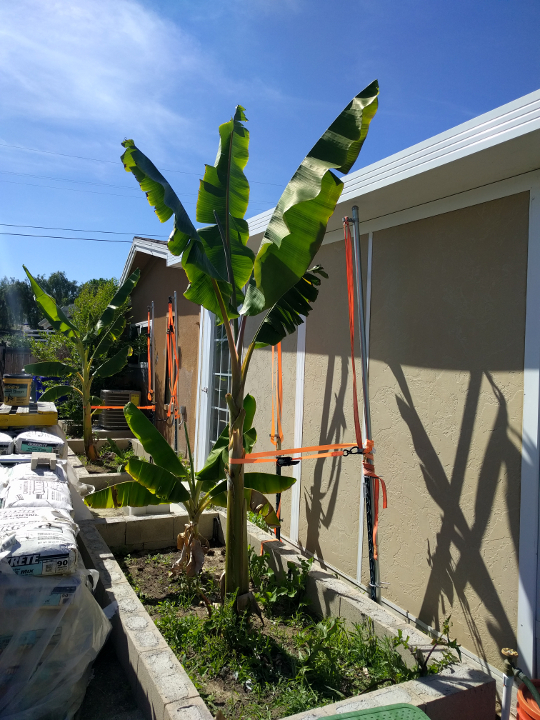 That’s a lot of concrete…

That’s a lot of concrete…

Dedicated for 6 planter beds under construction in the rear yard

The last 2 times I’ve been to southern Brazil(Rio Grande de Sul), we’d buy bunches of small bananas that the locals called apple bananas. Kind of crispy/crunchy with a bit of apple flavor thrown in. Great for out of hand and the locals also fermented and distilled them, not a smooth drink, burnt bad!

Have you ever heard of them?

Apple bananas are usually a cultivars of the Pome Group with triploid genetics AAB.

Not to be out done by the Namwa, my Pisang Ceylon is also pushing up a flag leaf and flower bud! 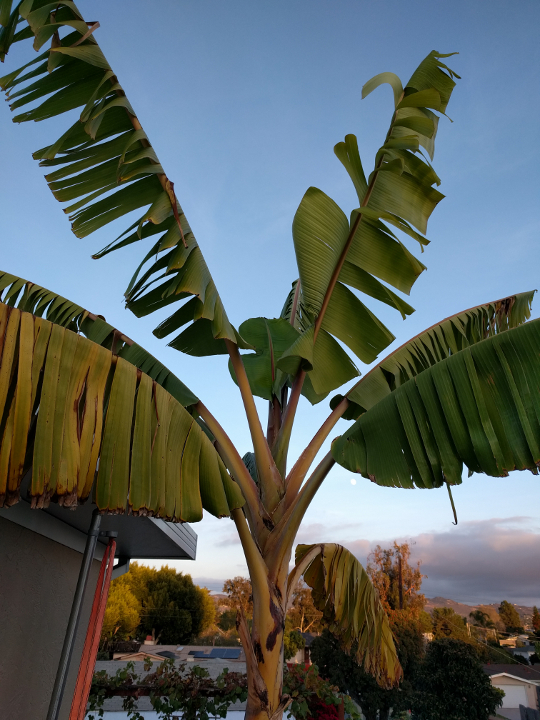 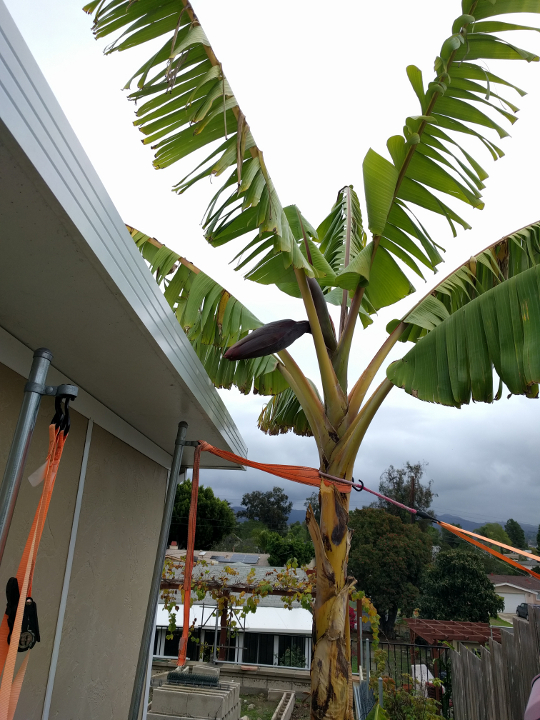 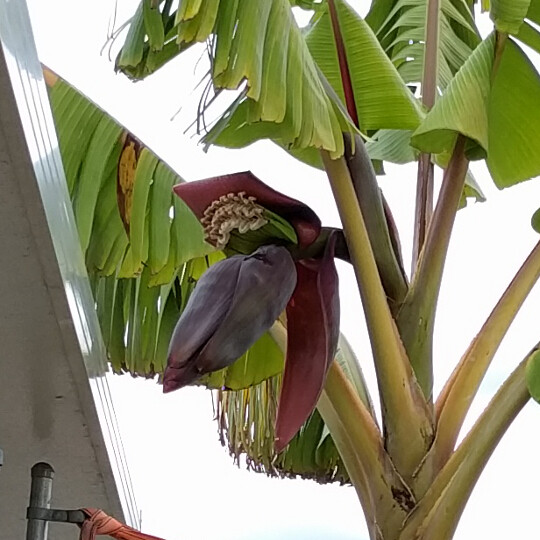 Sporting seven hands now, with at least a dozen fingers per hand 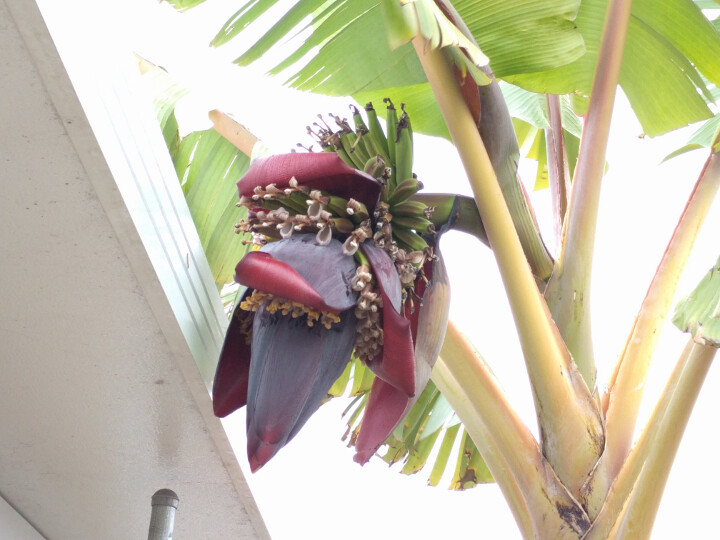 Still crankin’, 10 hands now. These fruits will be 4 inches in length and about 1" in diameter when ripe. 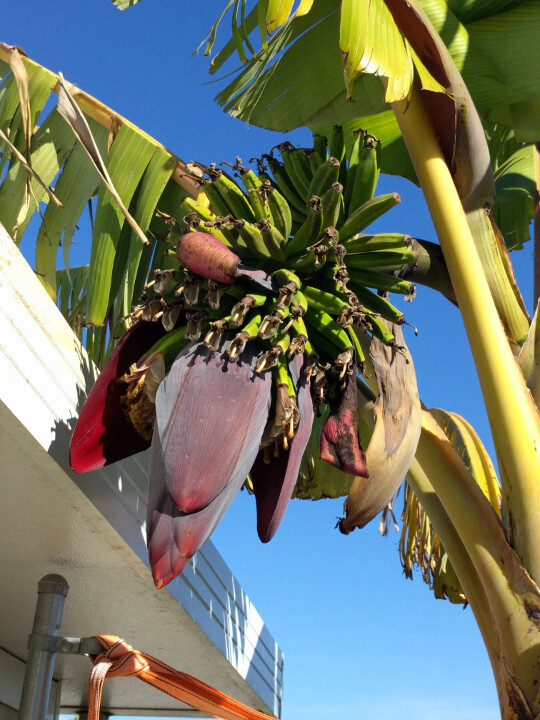 This is a great photo evolution. Thanks for sharing. 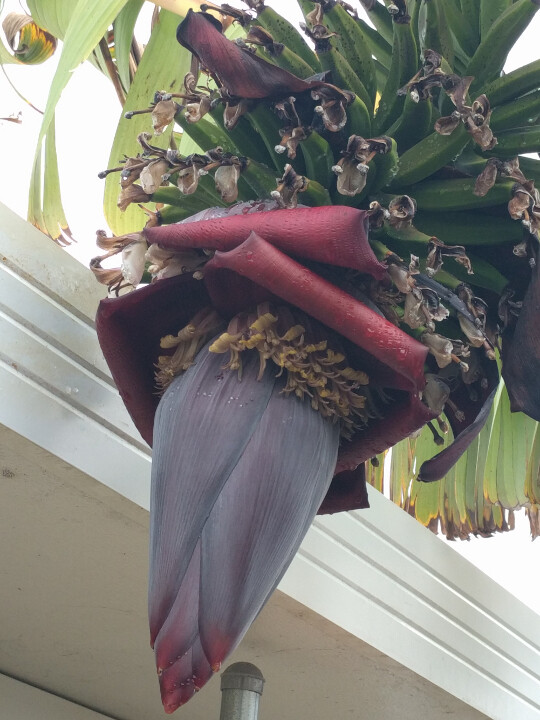 So how long before you are eating those? Is this pretty typical time for bloom?

So how long before you are eating those? Is this pretty typical time for bloom?

Given our climate, the preferred time for bloom is Jan-April so that they can mature to ripeness on the plant. Unfortunately it doesn’t always happen that way

I expect to be eating these in June.

Crazy, had no idea how they bloomed or what made fruit set, nice!

June? Nice… that is pretty quick.

How many pounds can you get off one plant?

How many pounds can you get off one plant?

The bunch size varies by cultivar, both in number and size of fingers. This cultivar produces about a dozen hands each with a dozen fingers weighing 1/4 lb each – so about 36 lbs total. 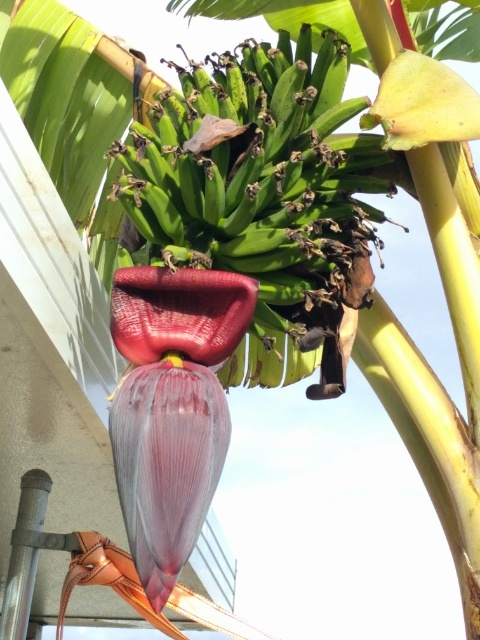 You should get some monkeys and some macaws. You could turn it into your own little rainforest.

I was watching some show over the weekend of those snow monkeys in Japan. They just sit there all day grooming each other. Sitting in a hot spring. Not a bad gig.

I was doing a little research (my wife has cockatiels). I guess down in S Florida there are some pockets of “wild” macaws, conures, etc. Look out at the bird feeder and see a blug and gold macaw squawking…

You should get some monkeys and some macaws.

I guess down in S Florida there are some pockets of “wild” macaws, conures, etc.

There are some pockets of wild parrots along the San Diego County coast. Thank goodness they’re not here – they devour fruit faster than a pack of squirrels.