Last year I lost a considerable amount of fruit to what appeared to be from fungal type issues. The flip side is that I still got a decent harvest without using any fungal spray applications. This year I would like to do better and this is why I’m making this post. Hope I can get you to share your schedule with me and the others that are interested. Any input is welcome. Before hearing your thoughts on the topic I was thinking about using two applications of Captain. One before bloom and one after bloom. I value your help and hope to add your experience. Thanks, Bill…

Hmm - I thought that muscadines was not affected by diseases or at least not nearly as much as bunch grapes. Describe the fungal issue that you had. Was it on your leaves? I was not planning on having any spray schedule with my muscadine vines.

The only issue that I have had with my 2 muscadine vines is that my Scuppernong vine is not growing nearly as vigorous as my Cowart vine. In fact my Scuppernong has grown but about 2 foot total since it has been planted. I did do some watering on it this summer. I have fertilized it with 10-10-10 some to no effect. No fungal issues that I have seen. Its been in the ground for nearly 2 years. Maybe its just in a bad spot. Or maybe Scuppernong was just a bad choice.

That’s interesting, because my vines have almost no fungal problems. However my other grapes sometimes do. The muscadines seem to be very fungal resistant. I’m in a different part of the country than you though so that might make a difference. Also there may be different varieties that more susceptible. Actually this year was a really good year for them.

Walking it back. Muscadines at my place have been one of the easiest to grow and have rewarded me with plenty of good quality fruit even with some fungal issues. The two issues I have seen are ripe rot and bitter rot which can be seen in the attached link. Just guessing but there has been about 10-15% loss. A more positive way to look at it is that 85-90% were good quality. If a vine produces 50-60 pounds that is still a lot good fruit. If one or two well timed sprays would eliminate the loss it might be worth the effort but on the other hand it may not for many people. The fungal issues I have observed have been on the fruit not on the vine. My vines appear to be very healthy.

Thanks for the link.

“If muscadines are being grown for juice it is not necessary to apply any fungicides to most cultivars because the berry rots are not severe enough to effect their yield or quality.”

That is nice for me to know since my primary use is juice for jelly.

Is there any specific reason that you are planning on using Captan rather than Myclobutanil? Maybe alternating between the two is a possibility. I noticed that the link recommended alternating fungicides. Of course the fungicides that the link is using may be unavailable to us.

Also, it was interesting that muscadines were only resistant to Pierce’s Disease rather than immune. It listed the Carlos vine as being susceptible to PD. Guess I will not be purchasing this vine although my local nursery carries it. Do you know of any other muscadine vines that is susceptible to PD?

That’s a good article. I have seen most of those at one time or another but I don’t recall seeing them on my muscadines very much. I think it was other grapes. I had not thought of alternating spraying with different fungicides, or even using more than one. Those Ison videos were instructive too. I never put my fertilizer on top of the ground, but now I see there’s no reason not to. I could eat muscadines everyday and never get tired of them.

Those Ison videos were instructive too. I never put my fertilizer on top of the ground, but now I see there’s no reason not to.

I was hesitant about the Ison video fertilizer schedule but after using it for two years I can say it worked well for me. The fertilizer I used was 10-10-10 and Calcium Nitrate for the first two years. My opinion is to strictly adhere to how near the trunk it is placed to avoid burning. After the vines are two years old I might try going with only using 10-10-10.

My New Years resolution is to get real serious about taking better care of my muscadines! Maybe plant another 2 vines. Almost wish for my Concord vine to die so that I would have more room.

Just curious, where did you purchase your Calcium Nitrate and what brand? I can not remember seeing it at any big box stores.

I have a local CO-OP store that has it in small bags (approx 4lbs) If you live near one I would try it firsts. Not sure but Tractor Supply might carry it.

I think Ace Hardware has small bags too, but probably will cost more. I don’t know where I got the notion, maybe from when I was a kid, but I put all my ashes from my fire place under my grapes each year too. I just scatter them out in the rows. Not sure if it helps them but it hasn’t hurt.

Not sure if it helps them but it hasn’t hurt.

Wood ash contains significant amounts of potassium and calcium and can raise the ph level. It probably will help if your plants need a higher ph level than they currently have.

Interesting stuff if your interested in the anti cancer value of muscadines:

If I now try propagating a vine by layering (which is bending down a cane and covering with earth) can I expect the cane to develop roots and be ready for transplanting by early April?

I haven’t attempted to air layer in the dormant period but my opinion is that rooting would be slow or none. Wish you would try and report your results. Below is a link I previously posted about air layering during the growing season.

If you have never air layered a muscadine in a 2 liter drink bottle this information might be of interest. This is the results from only one occurrence so yours or other might be different for a variety of reasons. Today was the first sighting of roots on the inside of the container. The layer was started 33 days ago from today. I have done many similar air layers but this is the first time to keep a close record. My guess is that the time varies but this can be a rough guide. Best wishes to all…

Actually I was thinking of in-ground layering rather than air layering. I have used the 2 liter drink bottle for air layering tomatoes but that was in the summer time. I’m thinking that in-ground layering would stand a better chance of working than air layering in the winter and early spring. I have read that propagating muscadines from cuttings using rooting hormone is difficult. Well, I would be out there today digging dirt for this but I believe its going to rain all day.

I haven’t attempted to air layer in the dormant period but my opinion is that rooting would be slow or none. Wish you would try and report your results.

Well here it is! Layered my Cowart vine on Jan. 1,2020 by bending a vine down to the ground and covering with soil. Then on April 30,2020 cut the lead vine to the ground off and watered. Trimmed the new growth off the new layered vine and shorted it. Of course some of the leaves withered but I think its going to make it. Problem now is deciding on when to transplant it to its permanent location under an arbor. Thanks. 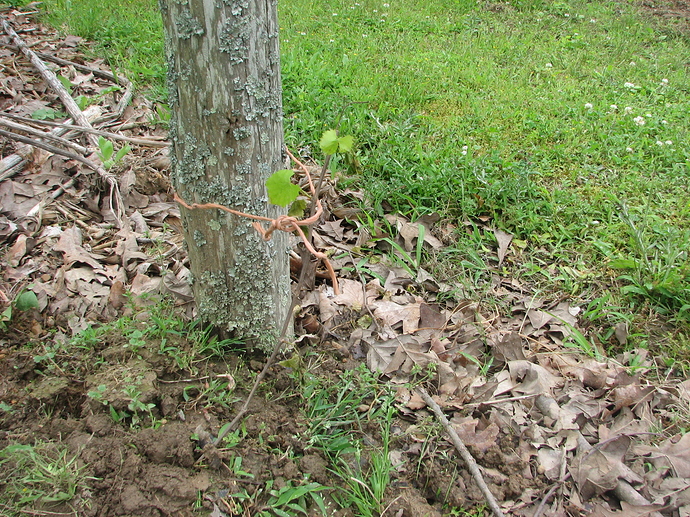 Have you any experience in transplanting muscadines in late fall say in November or December?

The vines I have planted from air layers in hot weather were kept about a week in pots under a shade tree and gradually brought out into the sun. Then I planted in there permanent location. Water frequently the first week or as needed. I would say it depends on how much care your willing to give the new plants as to how well they transplant.