Some sites say you need between a 5.8 to 6.5 pH for Muscadines to grow. What happens if your ph is higher - plant dies, lower yields or something else? It would seem near impossible to keep the soil at the right ph given how deep grape vine roots grow.

Is your soil in Virginia actually basic, or are you just asking for informational purposes?

My PH run 6.7 to 7.2 depending on where I plant. What affect does a higher than recommended soil ph level have on muscadine grapes? Thanks - Richard

Short answer: it should be ok.

Long answer: When I moved into my current residence, I had two different plantings of muscadine grapes. One was planted in ideal circumstances, and had out of control growth. The other was planted in unrelenting sun, in poor soil, that was more basic.

This stand still did fine. They grew ok, if you want more restrained, well-behaved grapes. Almost like…the difference between a vigorous apple on a seedling rootstock (the ideal stand), and a vigorous apple on B9 (this stand). There were grapes-not nearly as many as on the other stand, but enough so you would still have to thin slightly.

I didn’t spray either stand, and while both were relatively healthy, the ideal stand did get some fungus due to the overcrowding of the lush growth. The other did not.

If I was going to keep either stand, it would’ve been that one, rather than the one on ideal soil that grew almost out-of-control.

HOWEVER…I think you might be slightly misinformed if you think grape roots go down very deeply. I’ve dug up plenty here in the last two years, and while I would say the roots can be spreading, I would not say they get very deep. A foot, maybe. You can till in some sulfur a few months pre-planting to get pH down, then as the years go by, you can do some things like fertilize with something like holly-tone, incorporate some more sulfur, throw down some peat moss, etc. That might not work if you were say, trying to plant blueberries on pH 8 soil, but it should work fine to keep the pH down a few tenths of a point.

ETA: I didn’t detect a difference in taste. Both tasted equally horrible to me. (This is directly related to why I have so much experience digging up muscadine roots.)

Begs the question, what varieties of muscadine are you planting?

Ison has some of the best varieties.

Ison’s Nursery & Vineyard | The Most Trusted Name in Muscadines

I really appreciate your looking out for me, and encouraging me to try different varieties of a fruit that you love. And it is true, I don’t think my muscadines were one of the best varieties. They were just here as an established planting when we moved in, so I don’t know.

But…I think the real problem is, I hate any grapes with thick skins, and any grapes with seeds. If there’s a muscadine with thin, edible skin (that doesn’t have discernible tannin), and has no seeds, I’m on board, and I want to know about it, and I’ll plant it tomorrow. Basically I want a muscadine that tastes exactly like a European table grape.

I would actually plant European table grapes if I didn’t live in Georgia. I think if I tried them here, it would be considered cruel and unusual punishment for the grapes.

I have pretty much neutral soil. Runs 7 nearly every time I check it. My muscadines are young but growing like crazy and I have not amended my soil and it is a clay loam. My second year plants bore fruit and some varieties bore quite a bit for the size of the plant. I don’t think they are very finicky about what soil they have their feet in as long as it drains well. I’m not really pushing mine for the highest yields I can get but I did fertilize per Ison’s instructional videos. There is lots of info out there if you want to baby them.

I bought the book from Ison’s nursery on growing Muscadine grapes and according to the book Muscadine grapes are suppose to be within a certain ph range or you will see reduced yields and potentially plant damage. I am traveling now for work so I can’t check the PH range but I think the book stated anything over 7.2 ph could kill the plant. Let me verify when I get home tomorrow. Its good to know yours are growing at 7 - my soil usually runs 6.7 to 7. I put down enough acidifier to hopefully bring it down to 6.2 to 6.5 range.

Second year muscadines in July this year on my unamended soil. I can’t speak long term but they seem to be doing okay so far 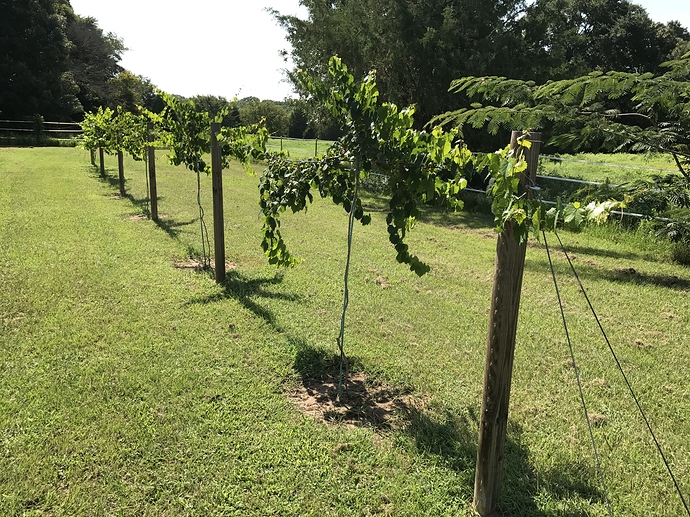 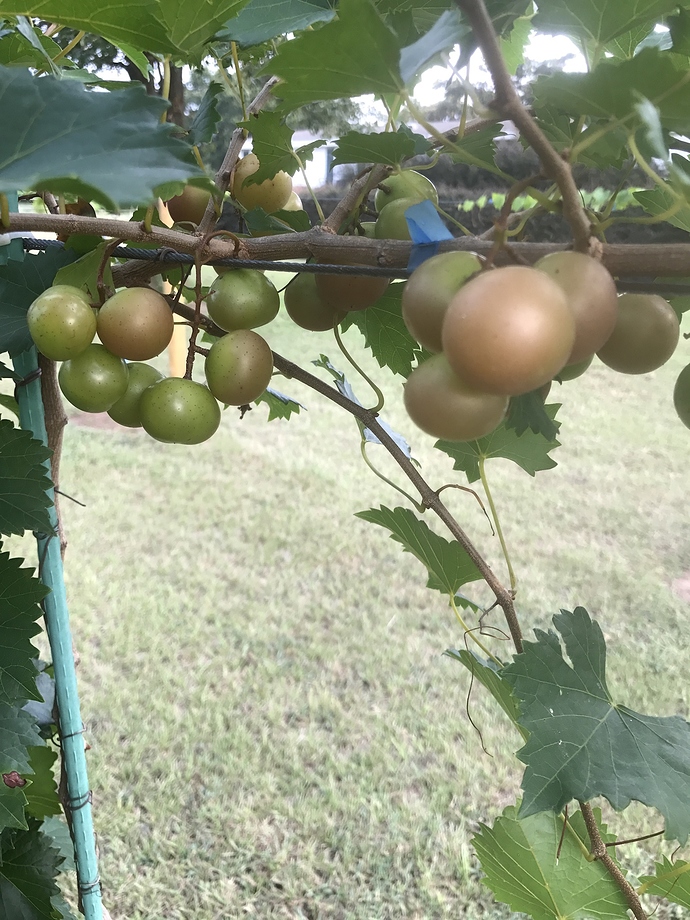 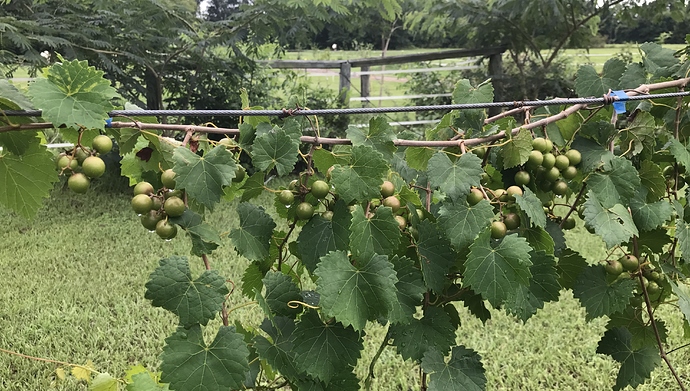 They look like they are growing well. I think muscadines do well under many different conditions and zones. Seedlings from wild vines come up everywhere in my area.

I finally found the book I bought from Ison’s - All About Muscadines, Blueberries & Blackberries by William G. Ison. On page 20 it states “keep ph high but never over 7 ph” . But then on page 21 it states “soil ph should be between 5.0 and 6.5”, then “for Muscadine production 6.0 to 6.5 is the best”, I thought the book mentioned vine damage when over 7.0 ph but i do not see that now.

If the PH gets too high, muscadines will show a lot of veinal chlorosis on the leaves. This can also be triggered by too much nitrogen fertilization which causes a potassium imbalance. How do I know this? I accidentally busted a bag of lime beneath one of my muscadines and decided to just spread it on the soil and let it work in.

Just for fun, please read this article from the Nutshell published by Northern Nut Growers in 1947.