Not sure how many trees you need to qualify for having an orchard, but I figure the 11 I have is a good start…

August and September can be brutal in Florida, even the north part of the state where I am. This year hasn’t been any different except for the excessive rain the last several weeks. For the most part all of my trees have done pretty well, save the Anna apple (I’m on my 4th)… Here is a list of what I have planted: 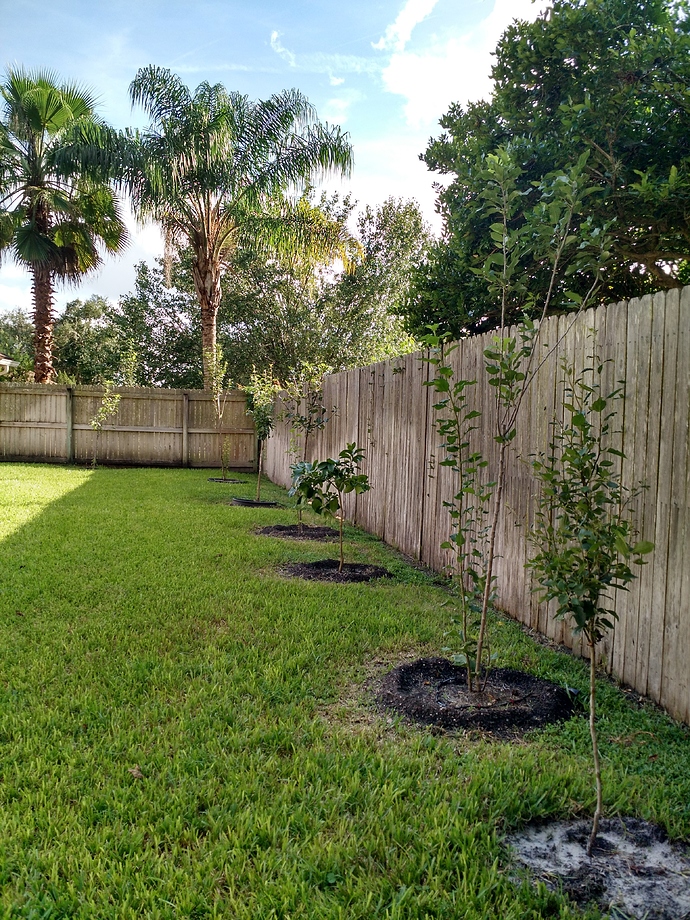 here are pics of the new Anna and Gala I planted…

When the time comes, I’ll be looking for some pruning advice…

Nice one, Jeremy. Welcome to the group.

P.S. Have you ever tried growing Warren pear? Might do well for you.

Thank you…not familiar with the warren pear, at least I haven’t seen it carried at any of the nurseries around me, so maybe the chill requirements are too high. The leconte ripens mid to late August, the kiefer, August to early September and the pineapple, early August. I had a few blossoms but no fruit this year…The leconte and kiefer are supposed to be cross pollinators, but I may also need another for the pineapple. I’m going to give it some more time to see what they do…

the pear trees seem to be doing the best out of all of them, although I know that a lot of folks have had fire blight issues…

Your trees seem to be reaching for the sun; how long are they in the shade during the day? This could contribute to fungal disease.

You probably should try some disease-resistant apple varieties like GoldRush, Liberty, King David, and Red Rebel. You also need to pull the branches down horizontal to calm the tree down from the vertical habit they have and develop fruiting spurs.

Warren pear would do well for you. Ignore the chilling ratings on all of these, they’ll do fine there.

That side of the house gets quite a bit of sun, at least 6 full hours. Other than the King David, I haven’t heard of those other varieties, but thanks for the tip. I’m pretty much out of space at this point, any more trees and I think I’d overwhelm the yard…

what is the best way to get the branches horizontal? should I prune the tops off?

How far are your trees from the fence? A friend of mine planted her pears and cherries about 4 ft from the fence. 4 years later, she is regreting it. The trees are to close to the fence. When she wants to bend down branches like Applenut suggested, she cannot do much on the fence side

I topped my apple off around 8ft and bend branches with heavy strings and rocks, quite primitive. Others may use better methods. As long as it serves the purpose, any material used should be fine

Put a lot of extra weight on any advice applenut gives you, especially when it comes to chilling requirements and performance in warm weather areas. He grows fruit trees professionally in an area much hotter (and drier) than yours.

One way to get branches growing more horizontally is to put your trees in bondage. Tie a soft string to the supple branches and tie a rock or other heavyish weight to the bottom of the string to pull them down and hold them in place.

Also, as the fruit growing bug in you grows stronger you will “find” more room to plant things.

A good tutorial on branch bending can be found at https://www.youtube.com/watch?v=rl1-9AIA1g8 We use this training system in the tropics almost exactly as presented.

Thank you!! great video…I’ll have to bookmark that one…

so, I trimmed off the suckers on the dorsett and attempted to bend the branches following the instructions on the video…this was the outcome…I also did the same to a couple of the pear trees. Thoughts?

Rocks grow very well in New England so I have made use of them. 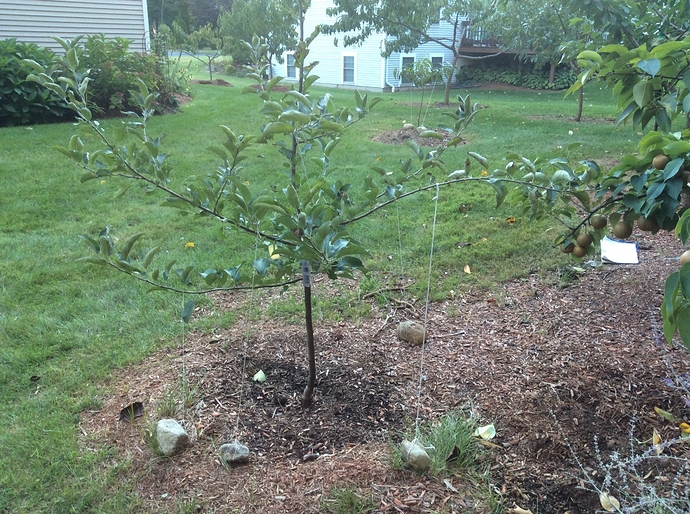 This is a second year Goldrush.

Mamuang: trim the “feathers” off the end of your branch tips so that they are just one long branch. GoldRush is a heavy bearer and will pull down the branch too much if you leave that many spurs on it. It also shades the branches below it.

Strive for lots of thin, drooping branches instead of big spreading scaffolds. GoldRush responds well to this.

Thanks, Applenut. I also will top it off next year. I want my tree short. It is on M 7.

Are you the gentleman we were helping with the afflicted Anna elsewhere? That line up of plants on the wall looks familiar. I’m very glad you’ve found this site, your plants look good!

thank you…that would be me…

Jeremy - It looks like your fence is shading your trees. That will cause them to “reach” for the sunlight and not put on many leaves or much growth lower to the ground. I have an apricot tree in a similar position (north side of a fence) and I had to train the scaffolds to start about 4 feet off the ground–higher than I would like–to compensate. Now all the branches/leaves get direct sunlight for most of the day.

Chris, thanks for the information. For probably 65 to 75% of the day, those trees get a lot of sun. That picture was taken right around 6PM.

Nevermind then. I wonder why they’re growing so whip-like. My Spice Zee tends to grow that way and I have to lop off the tips to promote more outward growth. Each time I cut a branch it puts on 3-4 more branches spreading outward. I’m certainly not an expert, but that’s worked well for me to promote growth lower down.

I think part of the problem is that the trees are so new. Most of these are less than a year old. The nursery I bought the Dorsett from had the trees all clumped together which would probably explain why it’s so whip-like…I never thought about it, but that makes the most sense…

worked on one of my pear trees. this is what I ended up with…