I am very proud of these persimmons, even though I’m only going to end up with a whopping TWO of them. But they look quite good, fairly large, and are still hanging on and just now starting to soften a tiny bit on the bottom. I’m not sure whether to let them soften up on the tree (the idea being that they might be a little sweeter if I do that) or to go ahead and pull them and let them ripen in the house where they’d be safe. I do have a bucket with padding in the bottom so if they fall off they will go into the bucket and be somewhat safe- at least from my free range chickens!

I was told that my zone 6b location might be too much for chocolate persimmons, but this one has done great. That being said, we had a very mild winter, no late frosts, and the warmest fall on record.

I’ve fallen in love with Asian persimmons, though, and I think I’m a bit atypical in that I prefer the astringent ones-especially when they are so ripe you have to spoon the gooey goodness out from the skin. I’ve never tasted a chocolate persimmon so I’m looking very forward to trying these. Another reason I love asian persimmons is that it lets me still be playing with, talking about, and eating fruit this late in the year- long after all other fruits have gone. BUT BY FAR, MY VERY FAVORITE REASON FOR GROWING THESE is the reaction of people driving by. Now that most leaves have fallen in my area, 2 giant, bright orange fruits hanging on a tree right by the road have attracted a great deal of attention. THe best part of all is most people think they are Oranges! hahaha. As stupid as that sounds to us, I can actually see why someone who knows nothing whatsoever about fruit would think that. And when i say they are persimmons that blows their mind even more because around here persimmons are lust a little bigger than large grapes and more of a brownish purple with hint of orange color. So yea, these blow a lot of minds. ha

Thanks for letting me share, and I’m open to any suggestions about whether to ripen on the tree or in the house or if it matters, as well as what other persimmons I should try here in 6a/7b. Also a little curious about the black sooty-looking stuff on the one on the right. I’m sure it won’t hurt the taste but its a little ugly. 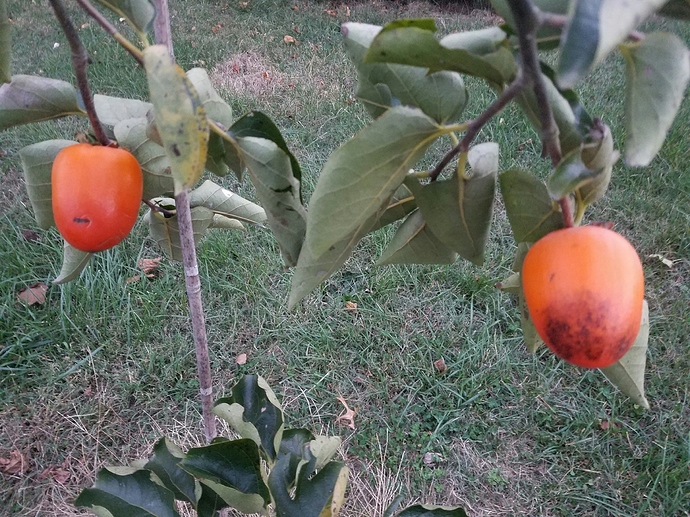 I’d harvest them. They ripen fine inside even if harvested hard, assuming they are mature enough. By Nov they should be mature. Those look mature. Once they soften up the critters will be after them.

The black is just cosmetic sunburn. Likely no damage to the fruit’s interior.

Please take pics of the fruit’s interior when you cut it open. Not a lot of pics of Chocolate out there. It is supposed to turn cinammon brown inside, much like the variety Coffeecake.

Make sure to check for seeds when you open it. Chocolate is a PVNA and if they are not pollinated (and thus don’t have seeds) they may not taste very good. Mine have always had seeds and I think it is due to the male flowers on Chocolate pollinating the female ones.

I usually let my Chocolates get more brown than that before harvesting. I have only a few this year; my old stock is dying and my new graft is not yet “in service”.

FYI, what are sold as “Chocolates” here are not a true Asian persimmon, but rather an interspecific hybrid with Diospyros digyna.

I collected about thirty fruits from my second year Chocolate persimon tree.
Don’t know how old it was when I got it from the nursery, but it was about three foot tall. No seeds were found in my fruit and the size was smaller than I anticipated. They tasted great, better than my Fuyu or any market bought Persimmon. In order to get them away from squirrels, I picked them a little early and let the ripen on my dining table. I’m currently ripening a whole bunch of Fuyu Persimmon, that I picked at a local orchard in a similar manner.
I will not take a chance and let them ripen on the tree anymore since the birds will get them first. 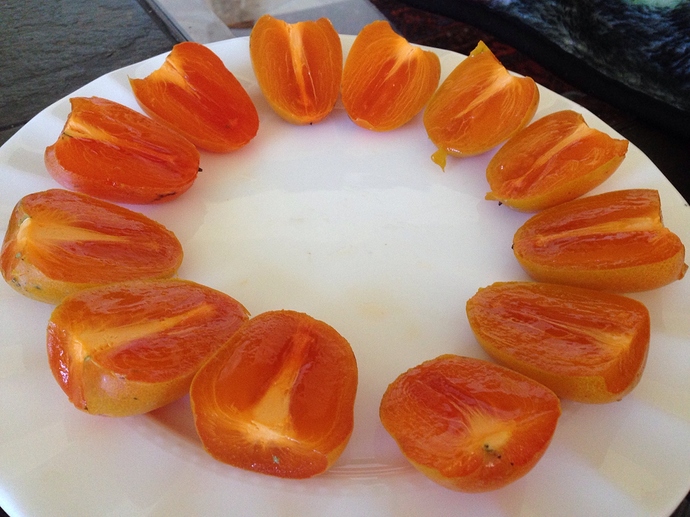 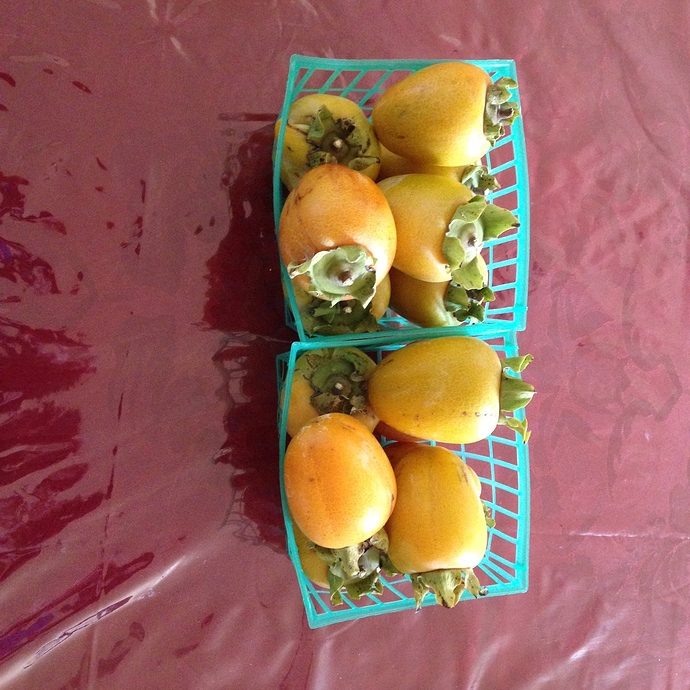 Kevin,
Congrats. They look great. I wish I could grow Chocolate here but it is too tender for my zone.

The only persimmons I have are those Fuyu from Costco!

Looks yummy. The flesh color is much lighter than fruit from Chocolate sold here.

These Chocolates ripened and we’re done over a month ago. Last week I picked some Fuyu from a local orchard and they are currently ripening on my dining table also. They will be just as good when ready. 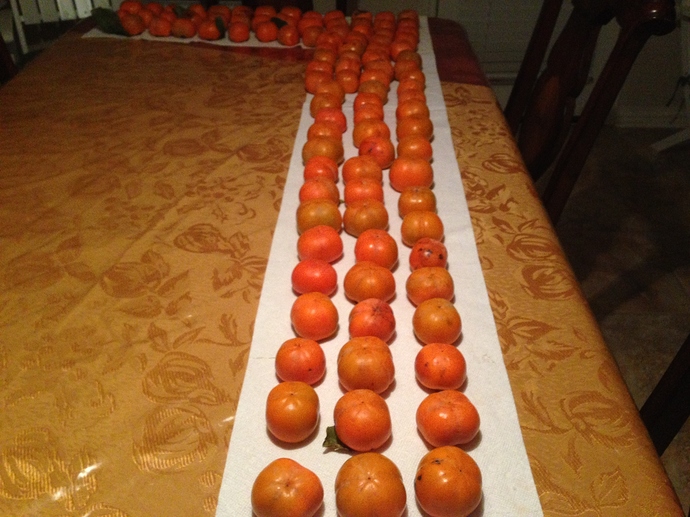 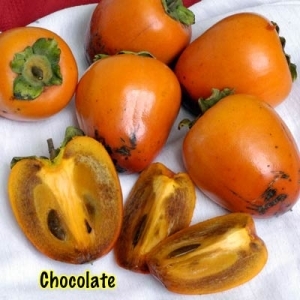 I was wondering as to why there was no dark colors in my Chocolate. The shape was correct but the color was off! In addition there was no seeds in mine.

Pollination makes them dark. Mine look like @Richard 's picture above when they are ripe.

I have been eating a few Fuyu and Maru but the bulk of my persimmons are not ripe yet.

Hard to say- non-astringent are more popular in Asian outlets but typical stores are much more apt to stock astringent ones. They were my first Kakis. I seems like it would be easier to market the non-astringent varieties, all things equal.

We always picked them hard very late and ripened them inside when I lived in CA. Once trees have dropped their leaves I don’t see how the tree will increase sugar in the fruit.

My understanding is that when pollinated, the seeds release acetaldehyde, which crosslinks the tannis, making them unable to bind to proteins on our tongues and create the awful feeling we are familiar with from eating an unripe, astringent persimmon. Basically, the astringency is removed because of the pollination. I have never understood, however, why this would actually make them taste “better” compared to letting them ripen normally after picking, or by alcohol curing.

My only experience with this is my coffee cake tree. Coffee cake is a PNVA, but most of mine do not get pollinated because my pollinator trees are still very young. If pollinated, the coffee cakes can be eaten firm, but if I let them ripen with the non-pollinated ones to the point where they get very soft, they end up tasting the same to me.

On the other hand, I have read that in Japan, they claim ALL persimmons taste better when pollinated.

Does anyone else have personal experience with side-by-side comparisons of pollinated versus non-pollinated persimmons?

I have never understood, however, why this would actually make them taste “better” compared to letting them ripen normally after picking, or by alcohol curing.

I think the issue is probably textural. Not everyone finds gushy (I decided not to write slimy) appealing. The info you provide here is interesting. It doesn’t seem to apply to American persimmons.

My Chocolate when pollinated was loaded with seeds and flesh was black. An ugly black that made them pretty unappealing. The taste was nothing special. When not pollinated they looked like the clear fleshed ones pictured above. The taste was slightly sweet and little flavor. Needless to say I wasn’t too impressed with that fruit.

Maybe mine were over pollinated. I think the yrs with seeds the Eureka had some male flowers. The Chocolate always had hundreds of male flowers even on yrs with no seeds and clear fleshed fruit. The two trees were ft apart in my greenhouse with the Chocolate downwind from Eureka.

My Chocolates have always been fully pollinated, but they were always tasting much different than other persimmons that way - like they had brown sugar added. Yum!

This year the Chocolate is very weak and produced few male flowers and few fruit. They may not have been completely pollinated. I am finding some of my other persimmons are having fewer seeds than usual.

Yes, I agree that texture can have a huge effect on perceived taste. The “Percinnamin” that showed up in grocery stores over the past couple years is a good example of this… it’s a Hyakume (PVNA) that is not pollinated, but instead alcohol cured so the astringency is removed, leaving the fruit relatively firm.

I was going to add that the brown streaks and speckles adds to the positive sensory experience in the pollinated fruit, but then @fruitnut chimed in and said he found it unappealing! It’s been fun hearing different opinions on this!

I was going to add that the brown streaks and speckles adds to the positive sensory experience in the pollinated fruit, but then @fruitnut chimed in and said he found it unappealing!

Mine didn’t have speckles and streaks. They were a solid deep black. Looked rotten but weren’t.

but instead alcohol cured so the astringency is removed,

Anyone know the technique and does it work with Saijo?