I saw one at the grocery store, and had to try it! I was not impressed

I wonder if it was over-ripe or under-ripe. I was surprised at the dark inside, but that was the best part: it was a little sweet & didn’t dry my mouth as much as the yellow flesh/skin did. Had a very pleasant sweet aromatic smell, very refreshing too, but I didn’t end up finishing it because of the lack of flavor/dry mouth. I’m glad I got to taste one because I was thinking about adding an Aromatnaya Quince next year.

What are your experiences with Quince? I know they’re not usually eaten fresh. 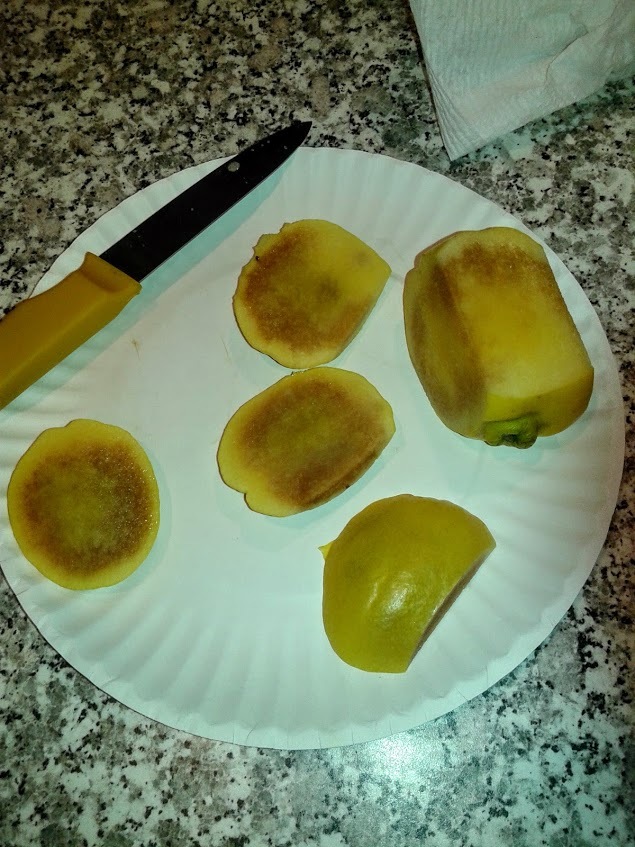 What are your experiences with Quince? I know they’re not usually eaten fresh.

I have attempted several times to like the taste raw but I don’t. Cooking them in some way must be the answer to enjoying a good quince.

Folks cook them down into a jelly.

The quince jelly I’ve had (on toast and bagels) was too perfumey and cloyingly sweet.

It might be nice on chicken or pork much like a plum sauce, but haven’t tried it that way.

Before fireblight came to America, every yankee farm had one quince tree in the corner of the lot. Coincidentally, it proved a critical source of Vitamin C during those harsh Northeast winters.

In the first century, the scholar Plutarch recorded that a Greek bride would nibble a quince to perfume her kiss before entering the bridal chamber, “in order that the first greeting may not be disagreeable nor unpleasant.”

Quince need to be cooked. If you slow roast them overnight, they will turn dark orange or crimson. They can make a beautiful dessert like that, cut in half, cored and served with ice cream or creme fraiche.

In Spain, they traditionally cook the quinces down into a thick jelled paste that is known as Membrillo, and it is served with Manchego cheese, which is a hard, somewhat salty sheep-milk cheese. Google Quince Paste or Membrillo for instructions. It is excellent! I buy a 1/2 peck of quince at the u-pick orchard every fall and make a big batch of quince paste that I can in small jars.

Replying about quince made me hungry, so here is a picture of my home-made quince paste on Manchego cheese and crackers. There is no added colouring in the paste. The originally pale white quince flesh turned deep crimson during an overnight roast. It is sweet, tart and a bit floral in taste, and it goes really well with the salty cheese! Mmmm! 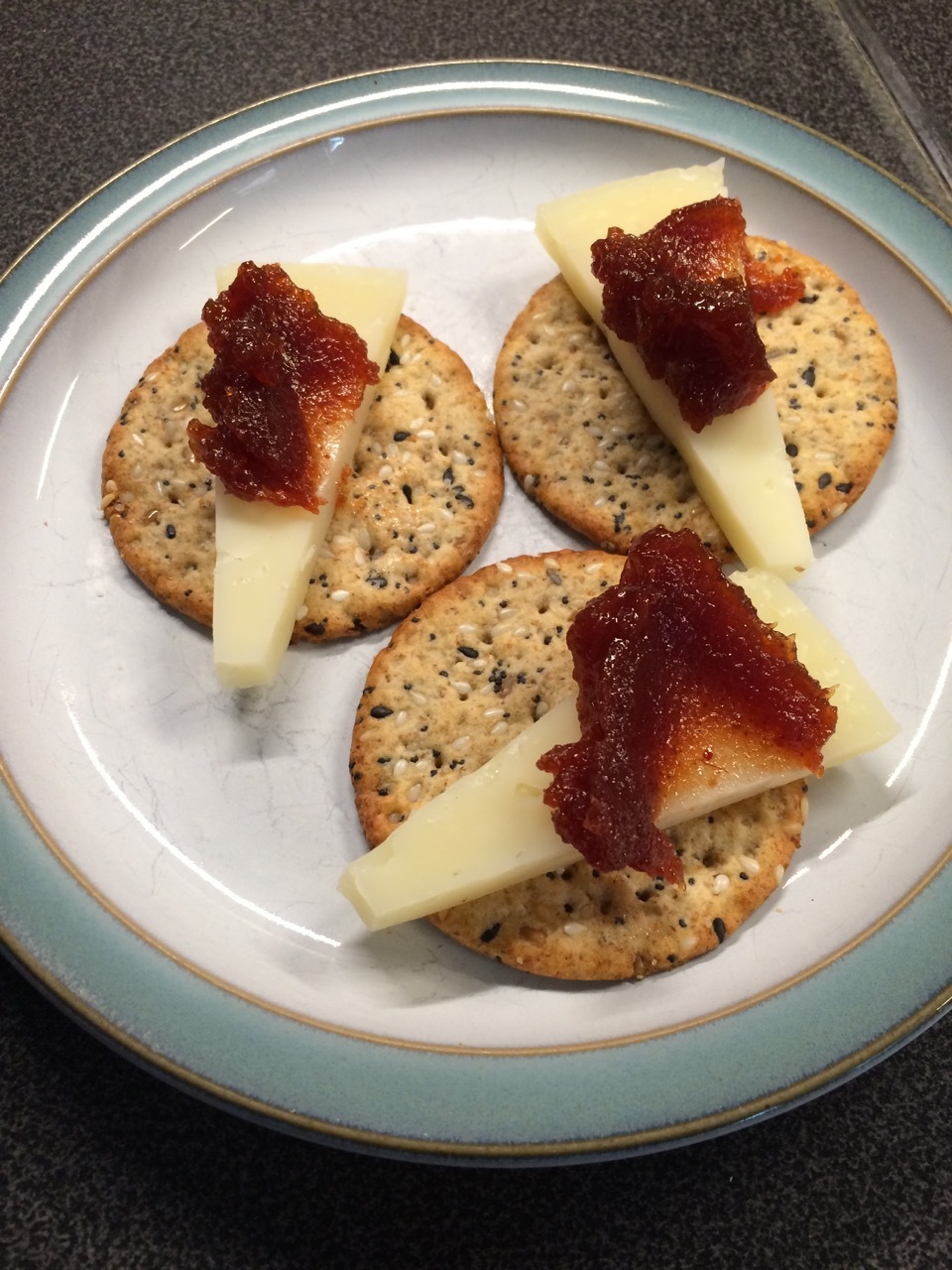 That jelly looks amazing. I may do the same and just pick them at my local orchard.

Before fireblight came to America, every yankee farm had one quince tree in the corner of the lot. Coincidentally, it proved a critical source of Vitamin C during those harsh Northeast winters.

You are supposed to be able to cook them into a paste and then dry them in a parchment lined pan in a cool oven or warm cupboard for a day or two until it becomes a sliceable paste, with a semi-firm cheese consistency. I have never been successful at that, since mine has always has ended up too sticky to slice. Instead, I just cook it down slowly until it is a very thick paste, and this year I added a pack of liquid pectin at the end, to help it set-up firmer, before preserving it.

The orchard is definitely the place to buy quince. In the supermarket they are stupidly expensive, but they were very reasonable at the orchard.

Also of interest, the owner of the orchard told me that they had a big unsold surplus the year before, so they tried juicing some, just to see how it would taste. Apparently, most of the tartness is in the pulp, because according to him, the ripe quince juice was just like nectar. He wants to make quince cider this year!

For more quince ideas, check out this link: 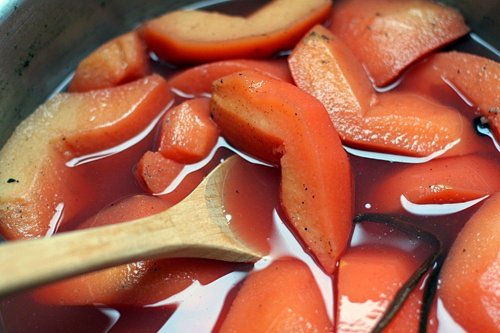 It's annoying to come across a recipe raving about the taste or beauty of something exotic or unattainable. You can't please everyone (no matter how hard I try...) and although not everyone can find quince in their local market, they're not...

A fruitbowl full of ripening quince in the fall makes your kitchen smell amazing.

I guess the yanks pulled out their quince when they finally realized what fireblight magnets they were.

Quince (variety pineapple) from my tree that appear as in the above image usually have brown rot and I toss them out. The inside of best fruits are uniformly pale yellow. Using quince in the same method for applesauce results in a non-drying mouthfeel; sweeten the sauce to taste. All of the quince I have juiced result in a dry-feel and tart liquid, but I have not brought the juice to a full boil. When the juice is thickened with Clear Gel to make a pudding, it loses its dryness.

When I first came to the States, I mistook quince for apple with heavenly fragrant! Biting into one puzzled my knowledgebase (or lack of) of this fruit. Years went by, I made note and steered clear of buying these un-edible “apples” from the grocery stores. Later on, I learned that they’re quinces, not apples but I was puzzled why stores kept selling this “fruits” in the edible fruits section but not bother to research further… Today, finally, I learned from this forum that they can be made into jam-like paste and eat it too!

Tom, Quince jelly is also wonderful. But I haven’t made it in years since my quince tree died. But oh its good. You would like it too!

Making the quince paste is a relatively straightforward process, but it does take some time. Basically, you peel and cook the quince until they are soft. Remove the core and any other gritty bits. Mill the pulp into a paste, add an equal part of sugar, and cook down until it is very, very thick. Then I preserve it in small quarter-pint or half-pint jars.

I have included the link below to the slow-roasted quince recipe that I tried the first time that I brought quince. The slow-roasted/poached quince are really beautiful. I poached a lot more than just two quince, since I had bought a half-peck, so after I had eaten all the roasted, sliced quince with ice cream and creme fraiche that I could, I ran some of the remaining poached halves through the food mill. I found that there were still some gritty bits from the cores, so I gave it a second pass through a fine sieve, and then added sugar in equal volume to the quince paste, and then slowly cooked it down to a very thick paste. After that, I put the paste in a parchment lined pan and left it in the oven for a day with only the oven light on, to get it to dry. Unfortunately, I was never able to get it to dry to the point where it could be cut with a knife. It was just too sticky. So I left it soft, but thick and canned it and it works for me that way.

I was in a specialty cheese shop this week and they actually had three or four different types of imported prepared quince paste available for sale, so you might try asking your local cheese shop if they have quince paste for you to try. 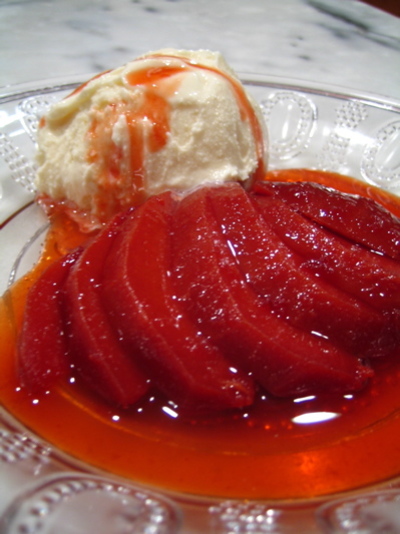 The fruit that blushes when you cook it

Quince are a difficult fruit to get to know. Every autumn, I buy one or two with the best intentions. I tell myself I'll poach them or make a lovely marmalade or perhaps a batch of membrillo (Spanish quince paste). They generously perfume our kitchen...

That’s very poetic for describing such magically tasty morsel! The only thing that gets me is the 5 hours of slow cook. I guess I’ll try out at least once to see if it really hooked me as poetry…

Thanks Paully for the link.

Thanks MrsG for the recommendation.