My first tree is sick

Here is probably a quick diagnosis for experienced folk. Last year I cut off a pretty big branch with two main laterals that were sagging badly and were looking sicker by the day. Where they were attached looked bad too…major lesions that looked to be scorched, so I cut off the branch and cut out a chunk of the wood and shellaced it. This year there is much more damage and now it really looks like Fire Blight…probably did last year, too…there are quite a few leaves that look like the ones shown, and worse: blackened. This series of photos shows that the disease/damage has moved clear into the main trunk, I think. Shoulda cut much more off last year. I’m wondering if there is any hope for this tree or should it be gone. It’s a Braeburn and my very first fruit tree, 5th leaf for me. I loaded it with scions of many other varieties and it was a very vigorous tree and it grew the scions well. My guess is that whatever disease this is came from or through a diseased or very susceptible cultivar scion. If this is Fire Blight (there are many more than these leaves affected) I should act now. Any ideas? 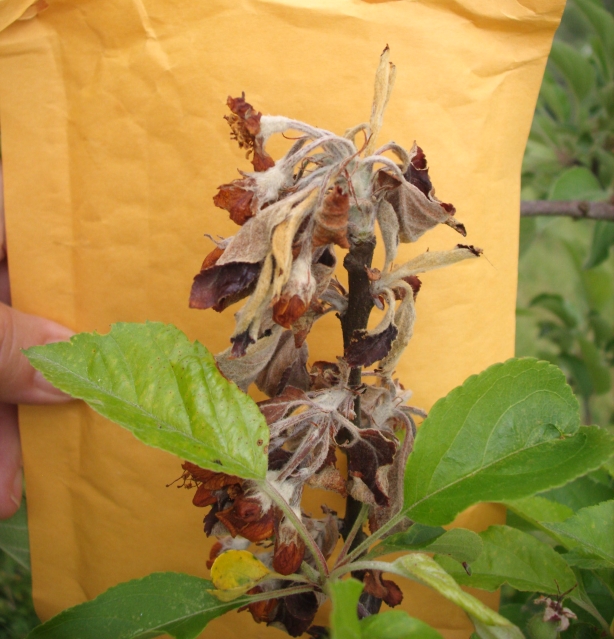 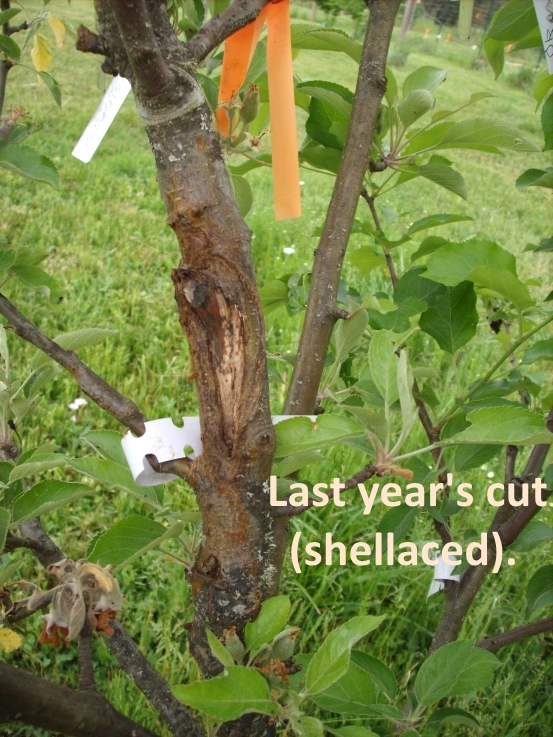 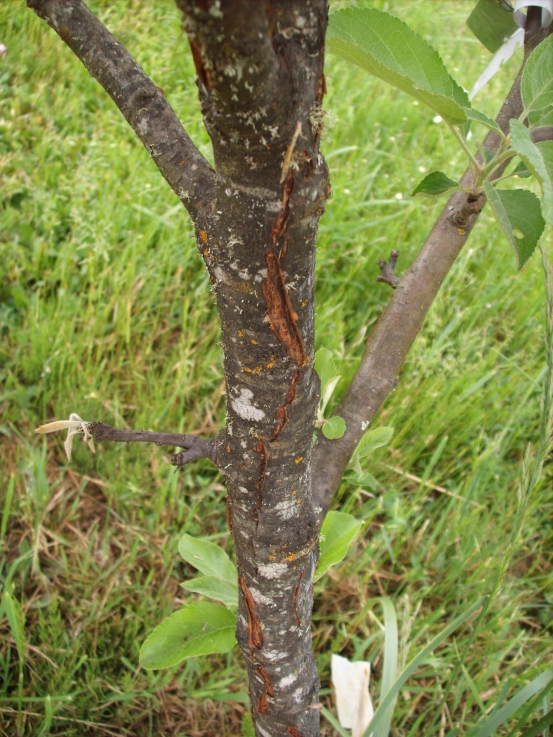 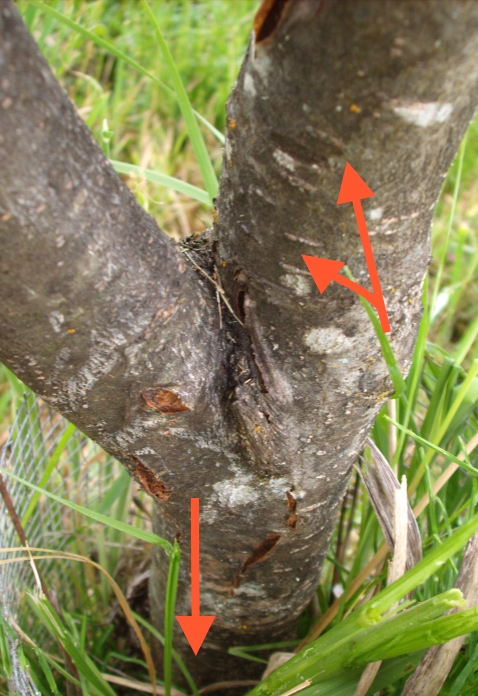 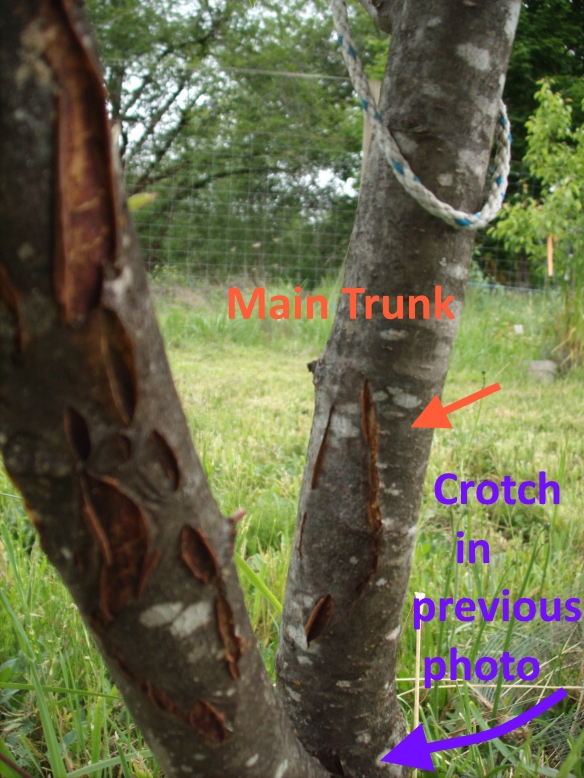 Ok, I’ll take a stab as you have quite a few things going on. First of all too many weeds, they are competing with health your tree needs from good soul. Looks as if your trunk is bursting from sun-scald, and lastly use a proper sealer for your tree wounds. Looks like really bad peach scab that you have shellaced!

I always assumed that sun scald would be on the south side not north side of the trunk; we rarely see it in W. Oregon; I’ll look into that. Do apple trees get peach scab? Will it kill a whole big branch, or a whole tree? I used shellac on the big wound where I cut off the diseased branch because I have it around for my woodworking and because I read that it actually works pretty good in that mode.

The top photo looks like fireblight. Other photos show a codominant leader and the worst kind of inverted bark crotch. The leaders are injuring the bark of each other with the pressure of similar growth. A single dominant leader expands faster than its scaffolds and wraps them with its own tissue to insure strength.

Thanks Alan. I’ll make a photo of the other leaves; they do look like FB to me. I’ll start with cutting off the ‘branch’ co-leader. As I mentioned this was my first tree (way pre-forum) and I thought it was a great deal to have so many branches, ha ha…it came like that.
The dark areas of bark that have now crept clear down past the crotch have me worried but if the tree is a has-been, so be it; I can remove it later if needed. I lost two other trees recently, both of which were on the fringes of a burn area (my own) that may have got an overdose of ash/alkalinity. So far these three are my only up-and-died after a year or two or three of looking good. The very knowledgeable folk such as yourself help noobies like me a lot .

Hi Seedy,
We don’t have much fire blight here in the Willamette Valley, but we have plenty of Ice Blight (Pseudomonas syringae), which can have similar symptoms.

I won’t claim to be an expert on fire blight because it almost never shows up here in the Valley unless we are overhead watering susceptible species in midsummer, but I’ve heard that you can use the general 65/65 rule to determine if conditions are right for FB. You need a sustained 24-hour minimum of 65 degrees and 65% humidity, especially with some precipitation. For those few weeks when our overnight temps don’t drop below 65 degrees (usually in July and August), the humidity is usually around 30-40% during the day and rain is pretty rare.

However, Pseudomonas (aka bacterial canker,ice blight, etc) is pretty bad here. It likes humidity and lower temps, which we have in spades here for over half the year. Most of those cherry trees you see around Corvallis and Albany with oozing trunks and the ornamental pears with dead branches are victims of Pseudomonas. I’ve lost lots of Asian pears, cherries, and some apples to the scourge. Limiting pruning to when there’s at least a week of warm dry weather in the forecast is the best preventative. You can cut back a sick tree at least 6 inches below the infected area, as long as the weather’s dry, and it might come back for you. Just make sure you don’t have a bunch of wet weeds surrounding the cut branch/trunk.

The best advice is often local.

Yes I read in Pacific Northwest handbook (it’s online) of diseases fire light is rare around here. I’ll try to find a link to it. It’s a collaborative effort of Oregon state, WSU and Idaho for fruit diseases and pests for fruit

…and yet some advice is universal. I’ve learned a great deal from your plant wisdom on this site, Alan.

I’ve found a variety of things attacking other trees and all but this (shown) and some severe PLC on my little Baby Crawford peach have kind of faded on their own. I was under the impression that FB was seldom seen in these parts, too, but this crud seems to have the same look. I’ll have to study it, and do no cutting during this week or more. I wish I was paying more attention during our post-flood heat wave. Thanks for all the info!

Ultimately, it can be worth the $30 to have a pathologist diagnose it. Your cooperative extension should offer the means to connect with the land-grant university in your state that provides this service.

I’m about 15 min.s from Oregon St. Univ. and another 15 from NCGR-Corv. I volunteer there sometimes. I probably should utilize their services…ha ha…good point.
This is another group of leaves on the tree, and it shows what the other branches did (same area) last year that resulted in them being removed. I’ve gotta cut this stuff out, it’s not coming back…and figure out what it is.
It occurs to me that with this tree being the ‘mule’ for about 25 other cultivars, I may have brought in some crud on a scion, though most of mine have been local. Still, I’ve had grapes for many years with zero problems until the year I started bringing in nursery plants. 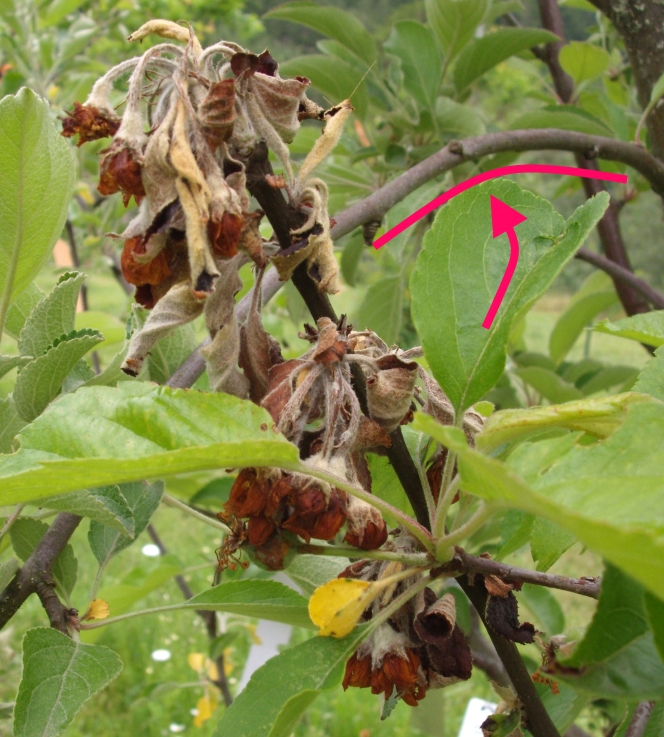 I cut off the ‘bad’ branch. Here is what it looked like inside. Right at an ugly place on the outside it also looked wrong on the inside. (There are saw marks, too.) 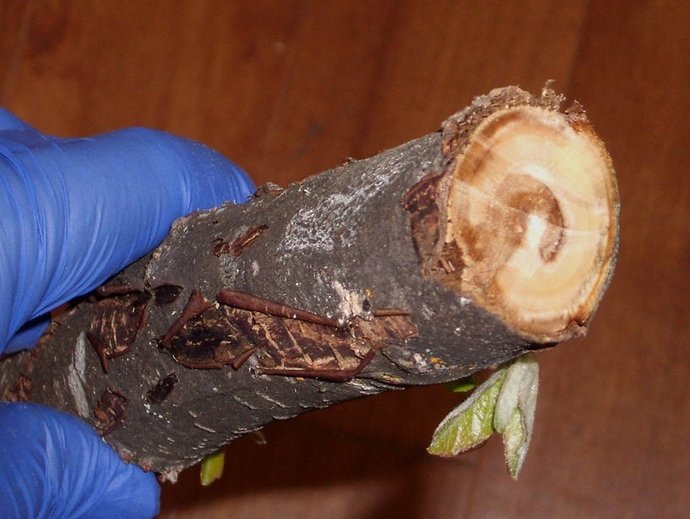