Most of my apple trees are farther down the driveway closer to my house and if time permits (not dark tomorrow evening when I get home) I will try to get some pics of those as well. There are only 6 of them there but I may change that if the grafts I plan on making do any good!

Your orchard looks good even in winter. I wish my trees looked that good. Plus, your blueberry puts my shrimpy plants to shame. Your grapevines look good too.

All those trees, though, no apparent protection from deer, do you have issues with them? I have to cage most of my apples, or the deer would destroy them. My bigger pear trees aren’t caged, and the deer seem to leave them alone mostly. My peaches are caged too, but I’m considering taking those off as they get bigger. For some reason they like to browse on my pluots, though.

I appreciate the kind words

I never could keep a plum tree because of deer (finally gave up on getting one to live in my orchard) and they have ate on my apple trees some but for the most part my dog keeps them ran off. He is a great dog and never barks unless he is chasing something off in to the woods! He is getting older though… what keeps him in good shape is all that running though

Your off to a good start with your orchard and everything looks great.

That is really great to hear! I am about 7 years in right now with the project as a whole but I have had many saplings and different trees and varities come and go. I have learned that figs don’t do well and die in my microclimate. Deer love plum trees and thay I still need to work on the soil to get my seedling apple and cherries to grow. One of the 6 peache trees was growing great with the others and was winter killed about 3 years ago and that summer had lots of sprouts. I pruned it the follwing year to remove all but the strongest shoot and am starting over with it but it is staring to catch up again.

I’ve only been doing the fruit thing for going on my fifth year, and already have found out what does well, and what doesn’t, at least for me.

Blueberries look to be a bust for me, I planted four bushes in '17, and two have croaked, and the other two are barely hanging on.

Raspberries have been a hard go as well, I have planted maybe 20 different varieties, and right now have ten that are still going. Last year we had a maybe a quart of fruit from all the plants, but there are more canes this year, so we should have a better crop this season. The canes aren’t as vigorous as the blackberries, but there’s more than last year.

Blackberries have been very easy to get going, and have grown like weeds. We planted 5 varieties in '18 and got berries last year off most of them. One variety tho, had its canes winter killed, but we did get some fruit of the primocanes last year.

Apples finally started producing some fruit last year, after 3-4 years in the ground. We got a couple pears off a three year old tree last year, too.

Peaches have never fruited, two are 4 years old, the other two 3 years old. But, three of the trees have put on good size and hopefully we’ll get some this year.

I transplanted a wild plum three years ago, and it produced a good crop last year, but none made it to maturity, prob squirrels. Argh. Speaking of deer, last year it looked like the trunk suffered a bit of a buck rub damage, but seems to have recovered.

No fruit yet from my three pluots, but we might get lucky this year. Same with my two bush cherries.

Got a small crop of gooseberries last year, and a good crop of strawberries the last couple years.

successes and failures has been much of the learning process for me as well.

Well here a bit more of my plantings. The apple trees up the driveway before you get to my house. 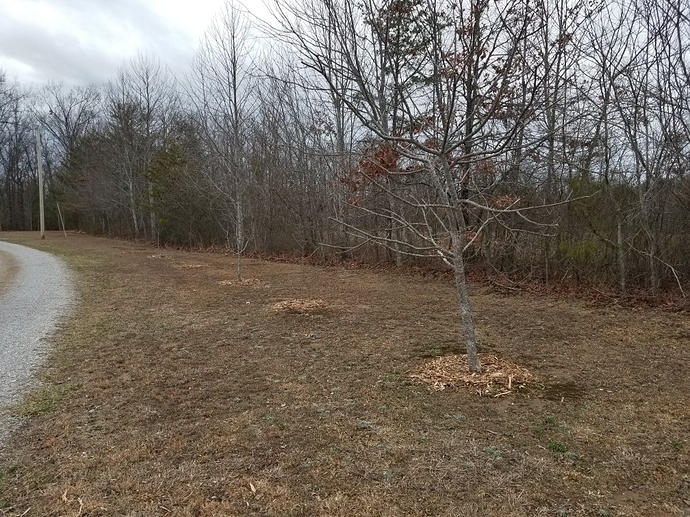 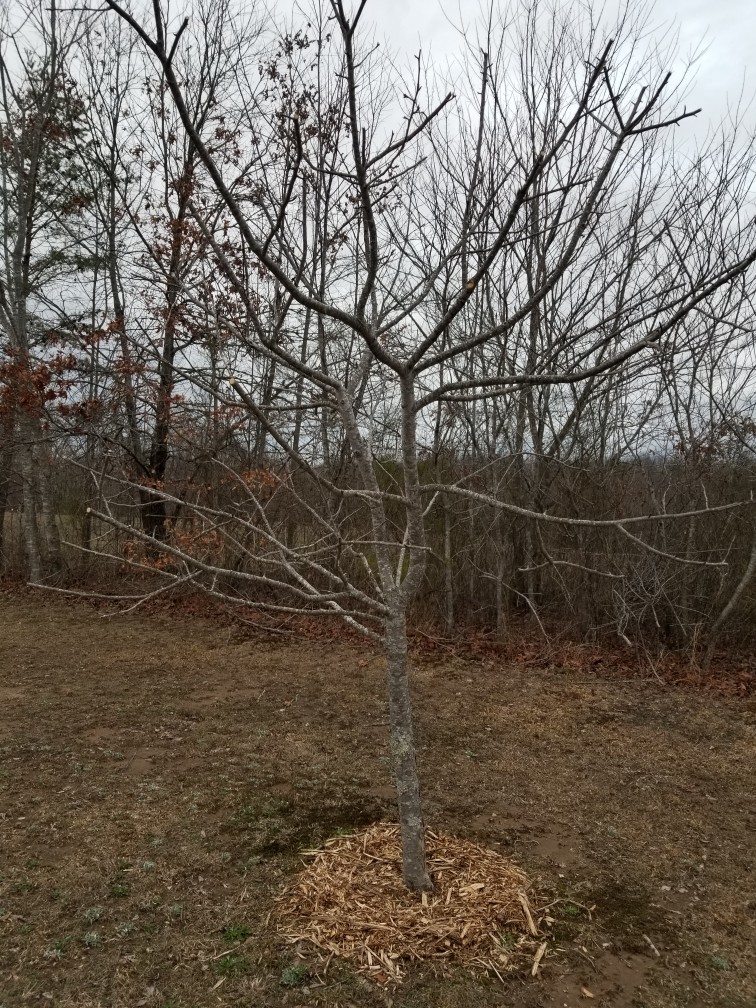 Next is what my wife’s family calls a Key Apple, it is a smaller, sour, green (a little bit yellow when fully ripe) apple. This one has only been there a couple years and was very small when planted as a seedling 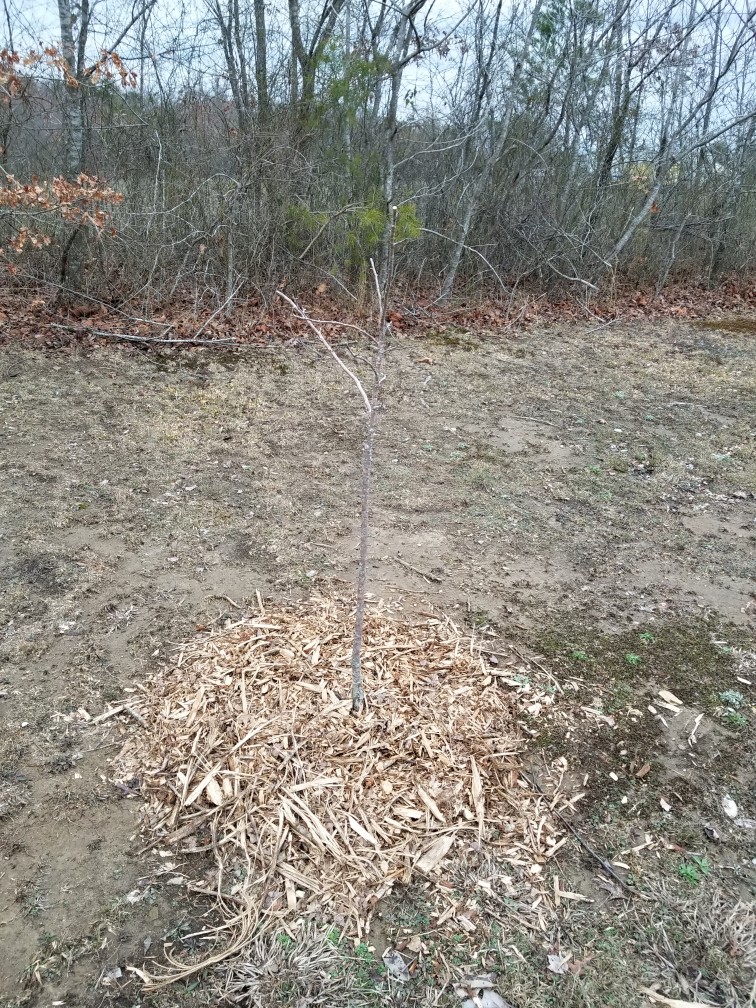 Next is a Fuji, if it doesn’t do better this year I may rework it… It was planted the same time as the Jonathan. I am going to really take good care of it and fertilize it well this year and see if it does any better first though. 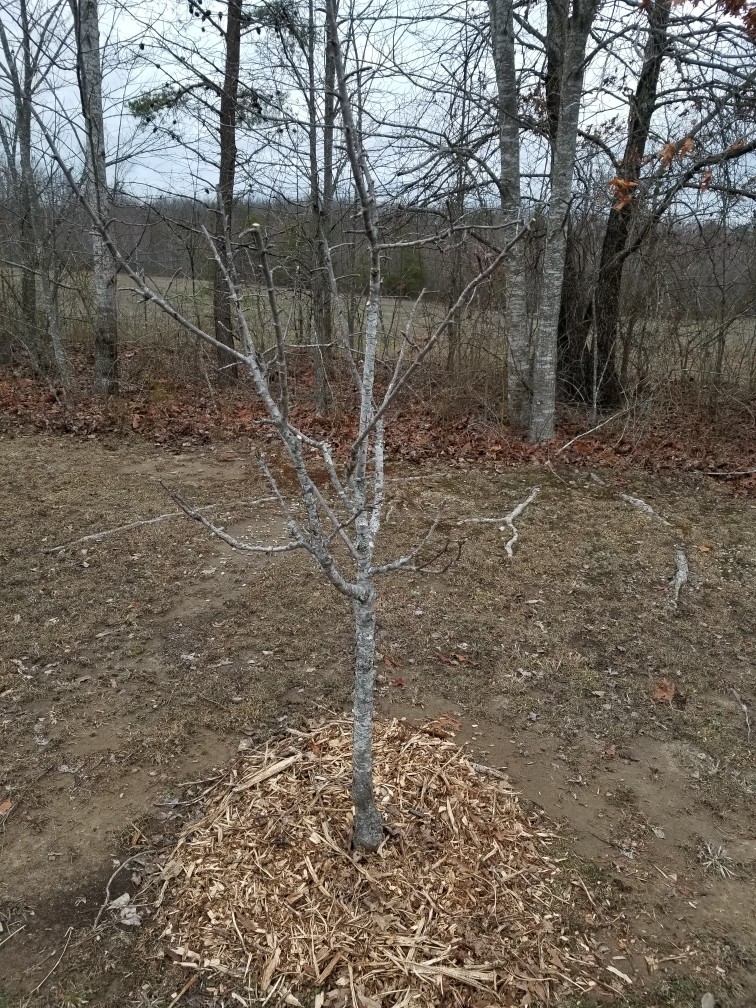 Then lastly for the apples is a Golden Delicious 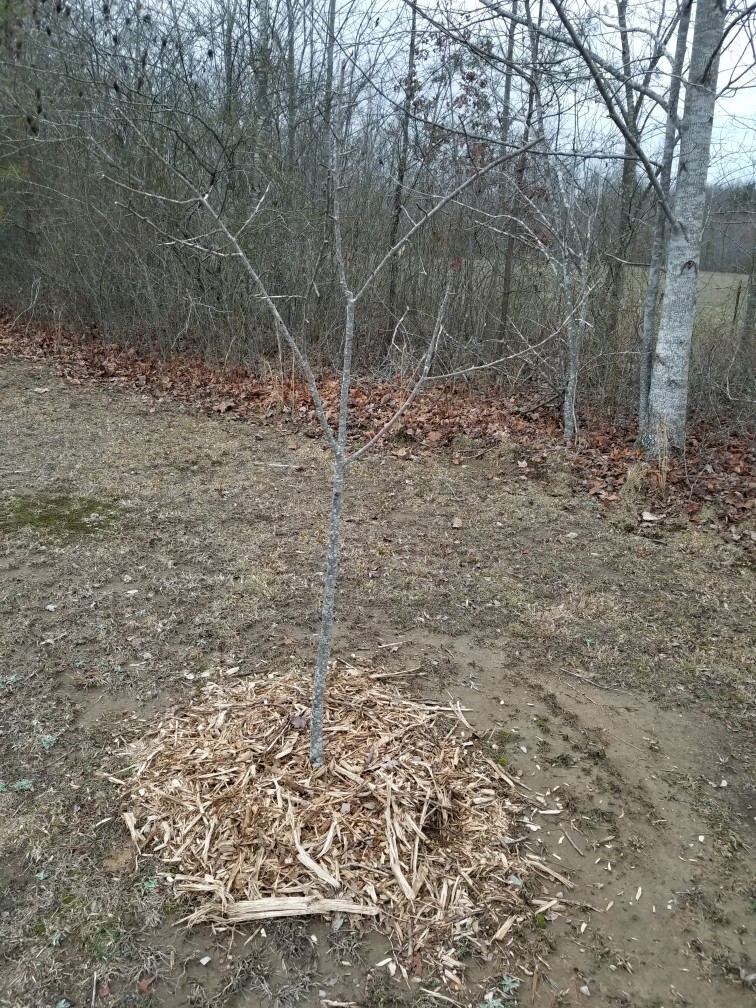 One of my red sour cherries. It is close to the pear trees 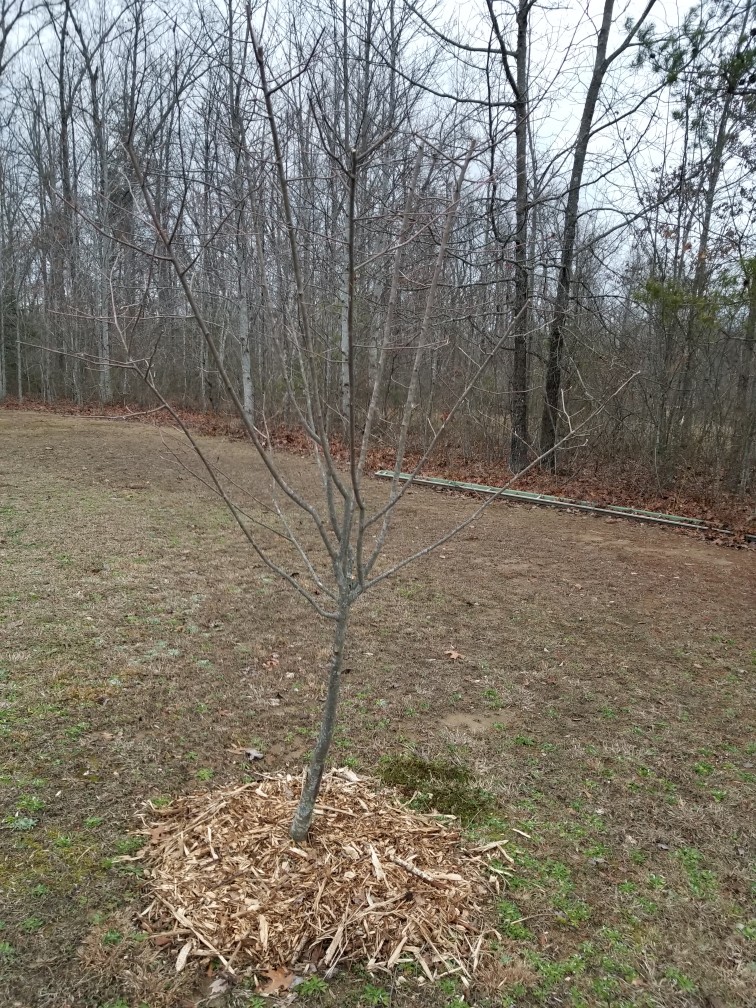 What kind of sour cherry is it? Montmorency? Your Jonathan tree looks good, I really like that variety, but don’t want another tree. I might try graftiing some scions onto one of our trees when they get a bit more established. Your knotty apples may have been caused by plum curculio, they can deform apples.

The way your trees are spread out, I bet your dog gets plenty of exercise keeping the deer at bay.

We lost our dog last year, he was about 14 years old. He gave up chasing deer a long time ago, even though he did like to chase rabbits and squirrels. When spring gets here, I suppose we’ll have to get us another dog, one who can get after them.

We have some new cats, and I’d like them to spend more time by the barn and keep the rodents under control there, but they spend most of their time up here by the house.

I’ve seen more possums around here than before. I don’t know what impact they could have to our fruit. I’m worried they’ll help themselves to my unprotected berry plants.

The cherry is sprouted from a sprout of a unknown cherry that my grandfather likely found at an old homeplace from another cherry. I have had a few cherries from the other one but it is so slow to grow… I do always remember how much he fussed and complained about how slow that it grew. The one he had was a fairly good size when I was young and there were many many cherries on it and the whole family would just stand under it and pick and eat them. Such good memories there. He sold that house and built another right beside it and several years ago the now owners asked my mother and aunt if they wanted any sprouts from that tree as they were going to cut it. They got several and I planted 4 or 5 myself. Only one survived and that is the one that I have had sprout the rest of my small cherry trees.

My dog will be 13 this year and I am afraid he won’t be around many more years. He is still very active though and I hope that is a good sign that he will be around several more years!

I will also check into the disease you are talking about

Bob, I see possums frequently but it’s funny that the only fruit they bother here is a large in ground Chicago Hardy Fig, and not enough figs to really miss. On the other hand, raccoons come thru in gangs, they can clean a tree overnight if not ran off, and break branches while they do it. I catch and remove when they’re too bad, in 1 Summer probably 5 years ago I caught 34. Birds haven’t bothered anything, deer only an occasional Apple twig, but groundhogs and raccoons are my curse.

I also have many seedling cherry and apple trees set out.

Are you just experimenting to see if they might turn out to be something good?

I say seedling but I meant sprouts. They are from ungrafted apples and cherries, so they come up as the same as the full sized tree.

I do plan on planting seeds and experimenting though.

In fact I do have some cherry seeds from a black sweet cherry in a barrel right now and hope that they come up in Spring.

Does this look like a wild pear tree to you guys 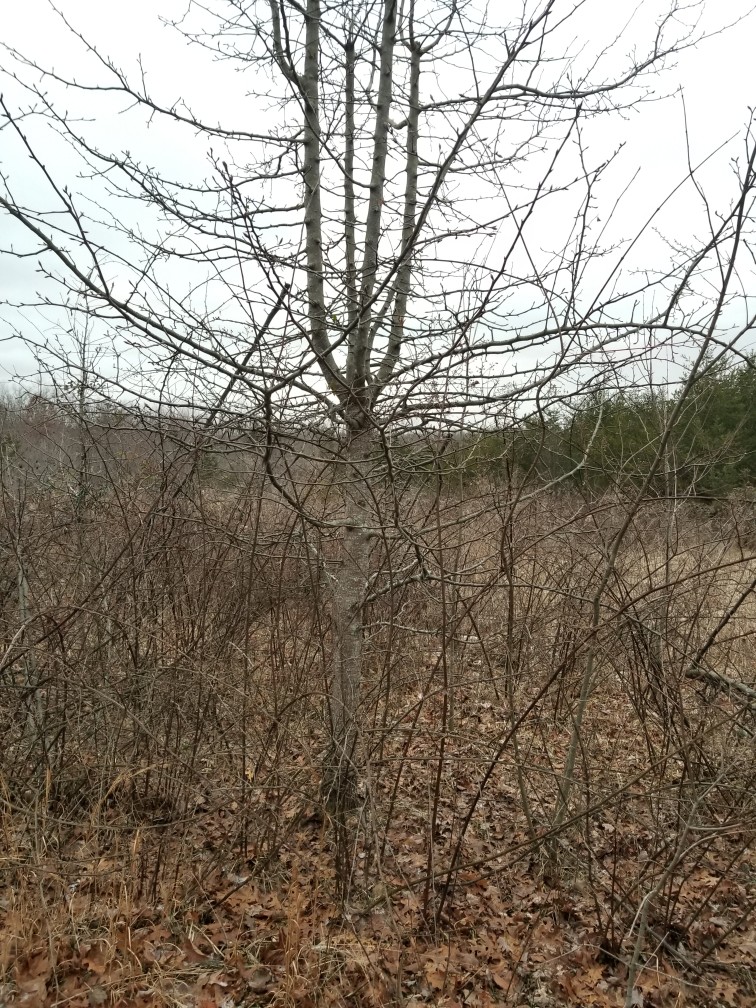 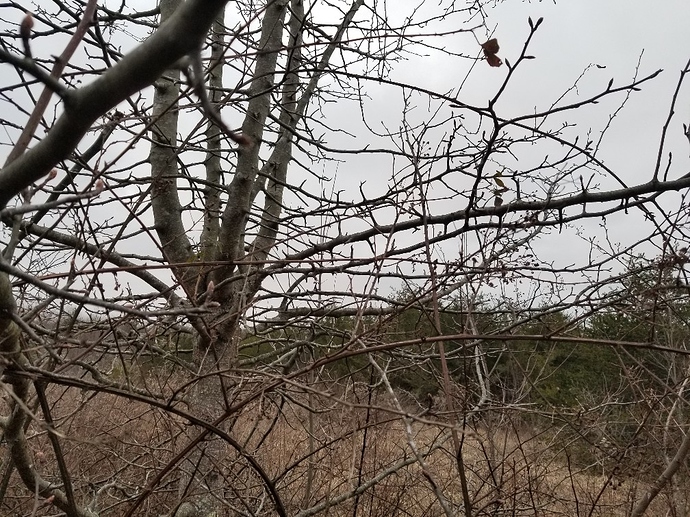 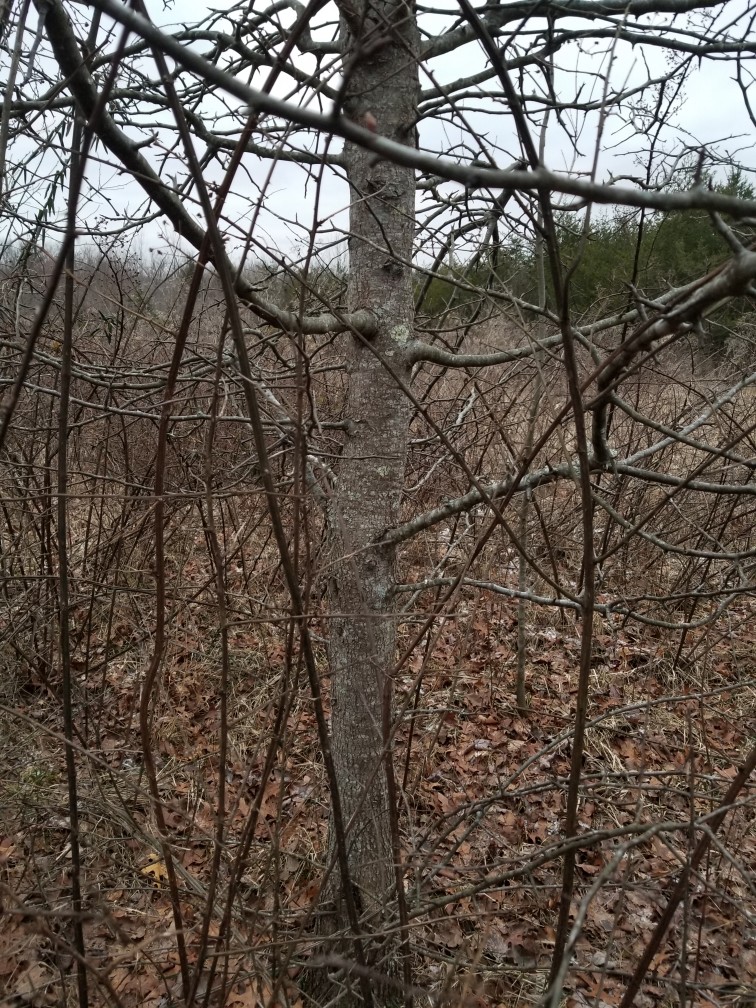 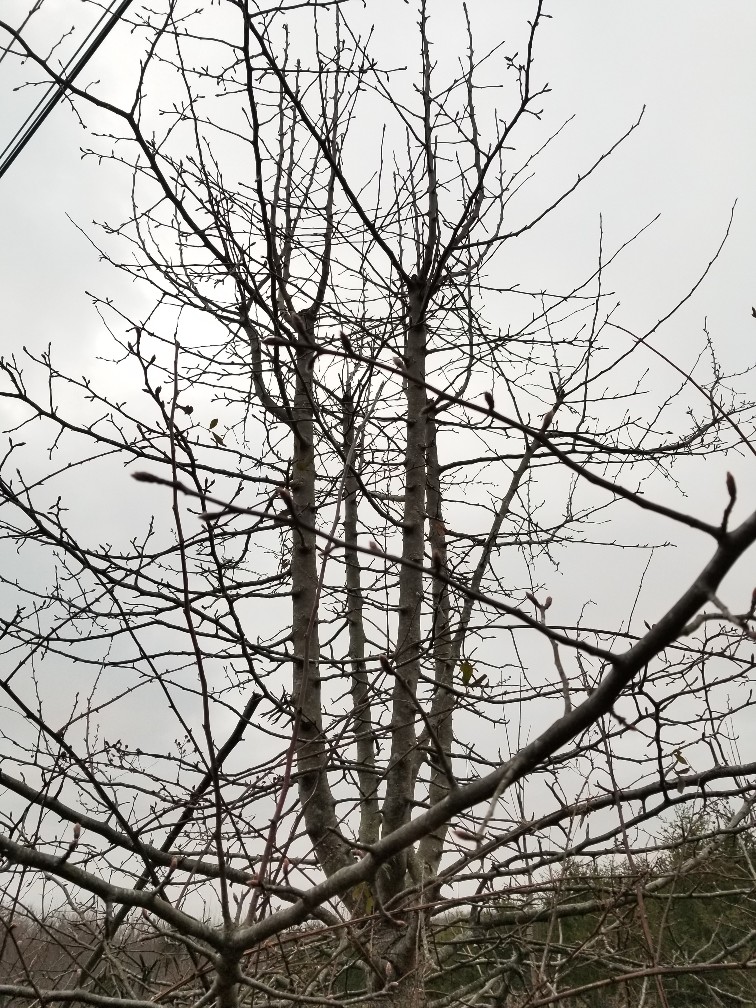 If it is. I think it is a very awesome candidate for top working…

Maybe. It looks like it’s been pruned (in the last pic, check out the tips of those four upswept branches). But, that doesn’t necessarily mean it’s a fruit tree. @clarkinks knows pears, maybe he could comment.

If it looks pruned it’s because it was

If it is a pear then I will mow around it and try to graft to it and hopefully get some pears from it!

I agree it appears to be growing in a pear or hawthorne like fashion but we need more closeups of the buds to know for sure. Particularly these buds 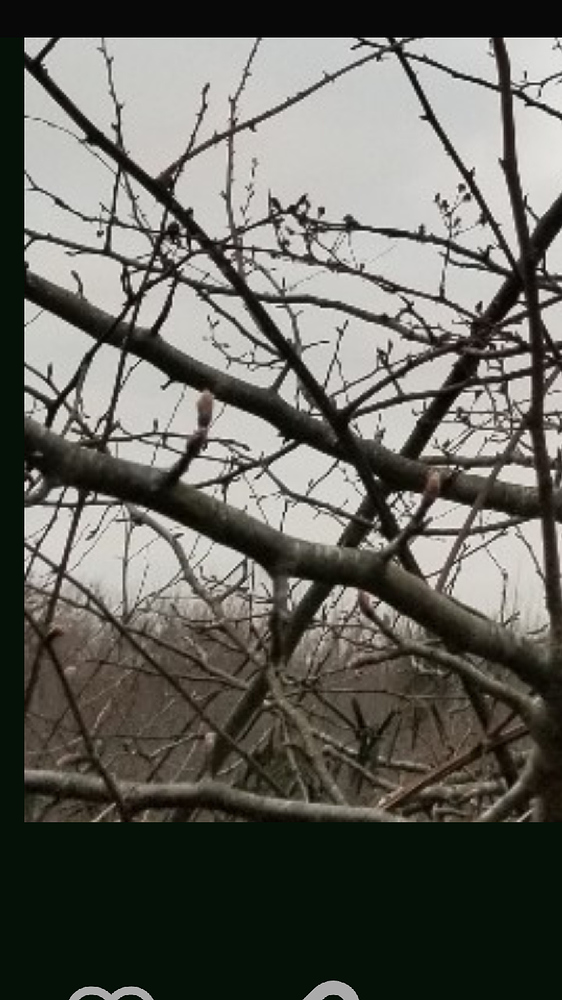 Resized_Screenshot_20200121-043958.jpeg810×1440 263 KB
! Ive seen many neglected pears and they make incredible orchard trees. This is one of those old neglected trees Favor for a friend - Top working Pears!. This is the way i top work dormant or semi dorman trees like this in the spring Top working Pears weather permitting. Thank @subdood_ky_z6b for pointing this out i might have missed this thread.
Poncho65 2020-01-21 10:56:43 UTC #40

thank you guys for the responses!