I have a tree I planted about 7 years ago. I bought it bare root from my local nursery. It came from Dave Wilson Nursery and it was just labeled Plumcots (yes, plural). This label makes me think that maybe it was one of the rejects from the interspecies breeding, that they didn’t think was worth naming or patenting. Does that seem possible?

I really like it though, because it is always my 1st stone fruit to ripen. It starts in mid-June along with the wild cherry-plums (P. cerasifera). I really think it deserves a name, so I can start sharing scion with people. But first I want to make sure that it doesn’t already have a name.

It does have one odd characteristic, though, which is that the fruit ripens unevenly. One side of the fruit ripens before the other, so when you eat it, half of each fruit will be soft and juicy while the other is still crunchy. They’re still tasty, though if they weren’t the earliest they wouldn’t be quite as exciting. It is also, probably, one of my most disease free plum/plum-hybrid trees.

Any ideas what this cultivar may be? Here are some photos: 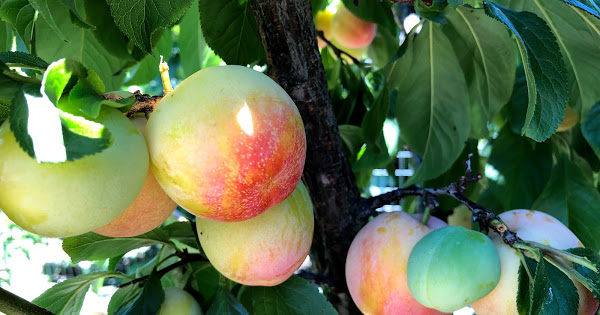 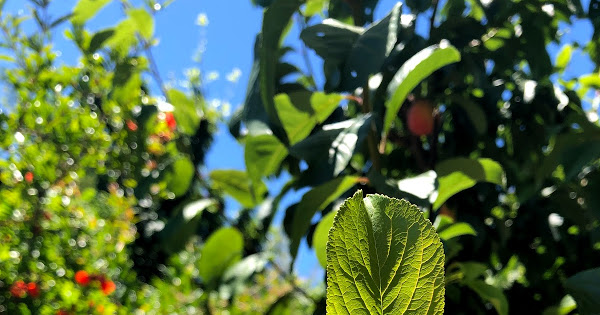 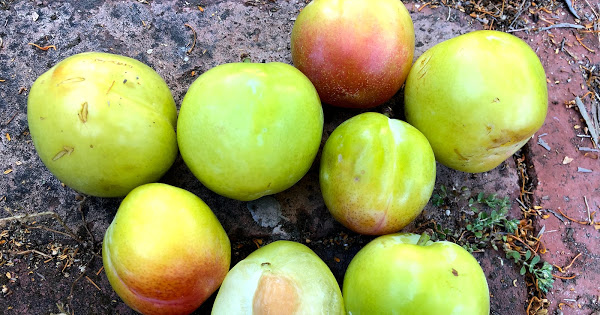 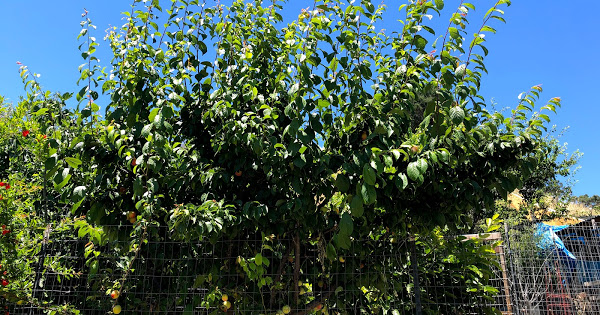 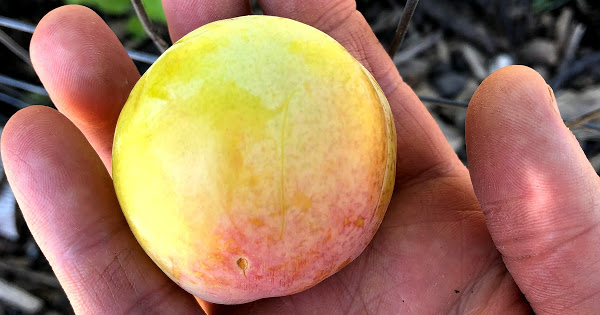 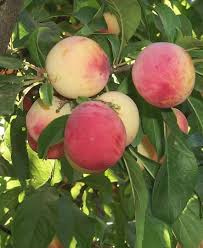 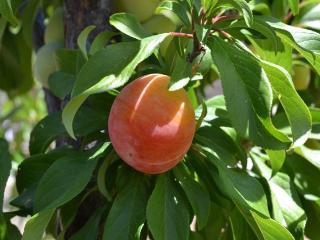 From Luther Burbank's heirloom garden, more on the plum than the apricot side of the scale. The Burbank plumcot is our most anticipated stone fruit of the early season. Burbank Plumcot is golden yellow with blush of rose, juicy, plum-like flesh with...

Thanks! Looks like that’s probably it. The fruit in my photos are a little more green than those from your nursery links, but mine are probably just less ripe. I’ll have to track down some Burbank Plumcot scionwood, so I can compare them side-by-side.

The name of this Plumcot variety is Apex. Of all plumcots introduced by Burbank only Apex and Rutland have survived to this day. Here is Luther Burbank’s original description of Apex:

The best of plumcots so far produced is Apex, a final selection in 1911. Ripens with very earliest of plums, about June 10, and three weeks earlier inland. Tree is strong, upright grower, and never fails to bear full crop, even where apricots are failures. This productiveness is unusual in plumcots of such superior quality. Fruit is extremely handsome, very large for an early fruit, 1.5-2" in diameter, globular, pink or light crimson. Flesh is honey yellow, firm, rich, aromatic, resembling apricot, sweet and delicious. Resembles apricot very decidedly in form, size, and quality of fruit, while it is more like plum in foliage, upright growth, productiveness, and smooth-skinned fruit.

Stan, I agree Apex is likely what this truly is. Burbank is a great plum with an apricot flavor but mostly plum characteristics aside from flavor. Quite interesting that more than a century later many of Burbanks creations still have merit! Randy/GA

Burbank plum is a pure P. salicina, it was one of the seedlings (along with Satsuma) that Luther Burbank imported from Japan in 1885, and introduced to public in 1888. It was an important shipping variety in California in 1930s-1940s and was produced commercially in South Africa for fifty years.

It is popular among fruit enthusiasts here in Northern California to grow many of the varieties introduced by Luther Burbank. There are also a couple of large collections — at Luther Burbank Home & Gardens in Santa Rosa and at Emma Prusch Farm Park in San Jose. Most of Burbank’s varieties are still worth their place in a home orchard.

Is the tree being sold as ‘Burbank Plumcot’ also known as ‘Apex’? It gets confusing when they rename things, but from what I understand, ‘Burbank Plum’ was not the original name either. They probably are just exploiting the Burbank name for its recognition.
I am curious to see how it performs in PNW, but only curious enough to buy scion if it is available.

Is the tree being sold as ‘Burbank Plumcot’ also known as ‘Apex’?

‘Apex’ is the name given to this plumcot by Luther Burbank himself, and by which it is known in the literature and among fruit collectors. L.E. Cooke (and, after them, Dave Wilson Nursery) listed this variety simply as ‘Plumcot’ because they either did not have enough curiosity to explore the true name or didn’t like it, but the variety description in the L.E. Cooke catalog said “A Luther Burbank introduction”. Raintree Nursery is the only one that lists this variety as ‘Burbank Plumcot’, nobody else uses this name.

from what I understand, ‘Burbank Plum’ was not the original name either

‘Burbank’ plum is the original name. In 1885, Luther Burbak imported twelve Asian plums (mostly seedlings) from Japan, and used most of them for further breeding. A few of these seedlings were good enough to be introduced into trade as is. One of them was ‘Satsuma’ (originally called ‘Blood Plum of Satsuma’), named for the province in Japan where it was grown. Another was ‘Burbank’, whose name was suggested to Burbank in 1887 by Professor H. E. Van Deman, a USDA pomologist. ‘Satsuma’ and `Burbank’ are no longer planted commercially, but are still popular plums for home orchards. Other plum varieties from this bunch were ‘Abundance’ (‘Botan’) and ‘Masu’ (‘Maru’), which are hardly known today.

Stan, Thanks for the information…never knew all this about the “Burbank” plum. Am wondering if this is truly what is growing in my yard? Fruit has an exquisite powerful fragrance and the fruit does have an apricot undertone. Whatever it is has been in my family since approx the 1940`s. on a smallish/dwarf tree which tends to sucker and comes true from suckers when they are planted out. Thanks again for the update!! Randy/GA

I would be surprised if your plum is “Burbank” because Asian plums are rarely if ever sold on their own roots (it’s just a very inconvenient way to propagate them). Based on the fact that your tree is a seedling that tends to sucker and based on your location in Georgia, I would suspect that it is a particularly good selection of Chickasaw plum (Prunus angustifolia). For example, check this thread about improved Chickasaw plums that were handed down through family lines in Southeastern states. Chickasaw plums are characterized by their narrow leaves (this is what “angustifolia” means; see leaf photos in the aforementioned thread). It is also mentioned that most plums, except Chickasaws, rarely survive for many years in places like Georgia.

Raintree Nursery is the only one that lists this variety as ‘Burbank Plumcot’, nobody else uses this name.

And also Trees of Antiquity.

From Luther Burbank’s heirloom garden, more on the plum than the apricot side of the scale. The Burbank plumcot is our most anticipated stone fruit of the early season. Burbank Plumcot is golden yellow with blush of rose, juicy, plum-like flesh with…

If it came from Dave Wilson Nursery, I doubt it is a variety they don’t list on their website. Burbank plumcot is not listed on their website. It looks like Splash pluot to me. At least how it looks in my yard. What is shown on the DWN website does not look like the fruit in my yard. Splash meets your description. It’s one of the earliest and most consistent producers in my yard. Definitely a keeper for me.