I don’t think I have noticed this before on these two 6yr old Nanking cherries from Fedco. Some small and a few medium branches seem to be having some kind of sudden die back. They flowered nicely, then as leaves are coming out a section will just wilt and die. Scratch test shows some of the shoots brown or going that direction, but not all of them. But I suspect they are in the process of going dead. This is affecting maybe 20% of the bushes.

I don’t see any lesions or canker type areas, but not necessarily sure what I would be looking for. It is strange because on one branch between one leaf cluster and the next it will go from live to dead with no special indication in the branch itself that something is different.

Any ideas? I’ve been reading the brown rot thread that has been active lately and I was thinking maybe that was it (I had thought it only affected fruit…) but I don’t see the cankers shown in the photos in that thread. 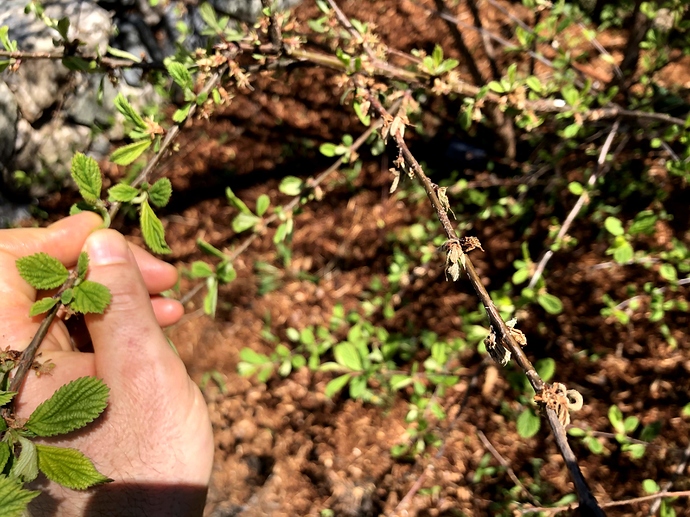 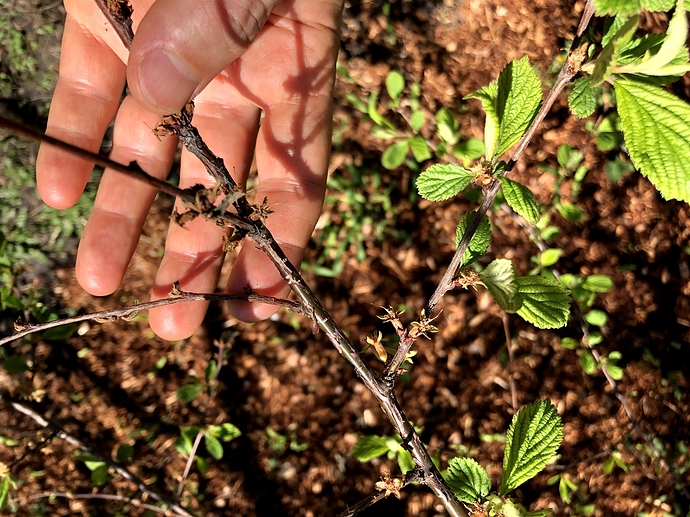 My first thought was verticillium wilt. My nanking had it two years ago, and I pruned it out. No problems since.

I am having the same problem on one of my two Nankings. I prune them out and overall the bush seems to be putting on new growth. In inspection, I pushed some wood chips away from the base of the plant and noticed it was very soggy. The problem started after a period of heavy rains. I don’t know if that is the cause, but the Nanking next to it doesn’t have a trace of the problem.

Prune it out and keep an eye on it.

Hmm, good ideas. I did put down thick wood chip mulch around the bases this year in March and it rained a lot in April. I’ll pull the wood chips back and prune out the dying parts. Thanks for the suggestions.

Thats probably monilinia laxa, one of the brown rot funguses. Many stone fruits are susceptible, it is very common in sour cherries and can eventually kill a tree. The fungus is infecting the shoots through the opened flowers. Nanking cherries are quite susceptible. My bushes look the same. Sometimes at the base of affected shoots gummosis will develop but that is not always the case. You should prune out affected shoots thoroughly. Keep your bushes well fed and hopefully they will grow out the damage. At least mine did the last couple of years. Good luck

Ugh. Will do the pruning. Maybe next year spray these with Indar?

Thats up to you. For me the damage doesn’t call for a spray yet. And I really restrain myself to spray opened flowers with anything that can possibly harm bees as long as I can. My bushes were able to keep the fungus out of the main stem and to replace the damaged shoots.

You should try to cut back into healthy wood and burn the affected wood or discard it from your land. Maybe good aftercare will lower the pest pressure for next year. And the scale of infections is really weather dependent. Damp and rainy weather in the period of blooming will enhance the fungus activity and vica versa. So if your bushes get really hurt by monilia and those bad conditions apply next spring you could opt for a spray.

For me I think I would rather get rid of my bushes if the infections get too bad. But I think that will not be necessary, fingers crossed. I planted them to experiment with prunus tomentosa as a dwarfing rootstock for plums. Last year I grew out 50 seeds or so. That should be enough for some testing.

Yeah, you are probably right. I so far have been able to not spray that much and the ones I do are still organic. I try not to spray anything at all during bloom. But I’m not too many years in and have not done much stone fruit - despite being 6 years old, generally healthy, and blooming profusely these bushes have only made one cherry as far as I know!

I also would in general rather have stuff that doesn’t need as much intervention from me, and in theory am open to replacing things that die with more robust varieties. But I planted more stone fruit this year (plums, peaches) and am more or less resigned to the idea that at some point I will have to spray a synthetic fungicide to get much out of them. My neighbor has a nice looking mature cherry tree which bears heavily, but every year it is an absolute brown rot nightmare. She doesn’t spray, prune, or do anything else to manage the tree.