Need a miracle: doing nothing

Bought 7 blue berry plants early last summer, not growing much since, now they are asleep in oak leaves. Hoping they make through this winter. Rainwater, acidic fert, what’s next, maybe should leave them alone. 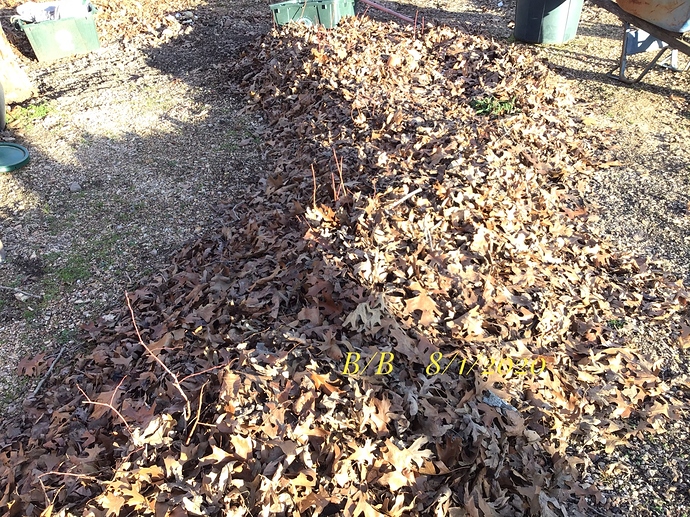 For blueberries I would think the first questions would be what is the composition of the soil (sand, clay, loam, loads of organic matter…?) and what is the pH. There is an active thread on the issue of poor performing blueberries that might have some useful thoughts and observations. It is called something like “Cut Poor Producing Blueberry Bushes to the Ground.”

I have used cotton seed meal, Espoma holly tone, rainwater lots of it.
P/H of soil? 7.8, very rocky. Also use a lot of hardwood mulch.
Soil with P/H 7.8 is normal here in Arkansas. Oak leaves are acidic. I burn a lot of leaves yearly.

Bob,
Why not grow Blueberries in pots like your other plants?

I just don’t want to move them around and worry the roots can’t handle Artic freezes. If it doesn’t work this year, I might.

Oak leaves don’t actually do much to change soil pH. Your best bet would be to add sulphur to get the pH much further down. 6 -6.5 is ok, 5.5 is better. 10x better, in fact. Each number on the pH scale is a jump of 10x, so your 7.8 pH is more than 1000x less acidic than the optimum 4.5-5.5. You may also be able to mound a bunch of straight, non-pH adjusted peat along your row. I’d think at least 2" thick. That is acidic, and would give your blueberries a layer of appropriate soil to spread their roots into.

@alan had a nice post a while back explaining how it doesn’t need the whole soil depth to be the correct pH, just enough of it to be.

Blueberries , worth it? General Fruit Growing

Mine probably wouldn’t grow in 6.5 either. That is the top 10"- the point is that the soil doesn’t have to all be strongly acidic. Whitcomb’s research proved a long time ago that pin oaks quickly respond to a surface application of aluminum sulfate even when the pH hasn’t been altered below a very thin layer of soil on the surface. I discovered a similar thing happens with blueberries by accident. For years I assumed my blueberries were thriving in nearly neutral soil until it occured to me…

I feel your pain on alkaline soil.
I have a little over 7.0 but also sky-high calcium levels.
But I’m not growing blueberries.

Only “sure-far” way I know to lower pH is to apply elemental sulfur as @jcguarneri suggested.

My neighbor planted a blueberry bush and did nothing but water it and it took off. this was a few years before I planted my own. When I planted mine I tested the existing clay soil and it was 5.6 pH! A little high but in the “do nothing” range. Driving up and down I-5 near eugene you can see commercial blueberry plantings all over. I wonder what they do, I’d guess just mound up the rows for drainage and add some maintenance level of sulfur every year. I did buy my own pH tester because I have a few in pots and I had some leaf yellowing and figured owning a pH tester was part of the deal.

I planted mine in a raised bed with a couple yards of soil brought in that tested at 6.5 pH, so I had to add sulfur. A 50lb bag of elemental sulfur (probably a lifetime supply) was $20 at a local feed store. I used this osu pub for the sulfur rate:
https://catalog.extension.oregonstate.edu/ec1304/html

I get it now, it’s clear now how to grow B/B successful, thanks.

Come to think about, containers might be good idea, got some large 20 and 25 gl squat containers not in use. Just use peat moss and pinebark. How wide are the root systems of a mature b/b bush and are they shallow?

what cultivars? when i was zone 7 the southern varieties did better than northern varieties. pink lemonade performed the best, fantastic growth. soil ph around 7, didn’t do much for soil additives except coffee grounds and blueberry / azalea fertilizer you can get from lowes. if you use better fertilizers / sulfur you can get the ph much lower, i’m sure it would do even better.

Can’t tell you, tags are all covered in leaves, all were choice varieties.

Yes,Pine bark(small nuggets,if available) and Peat moss.I go 60-70% Pine bark.
That’s about the size of containers most of my plants are in,especially the mature bushes,but the young ones don’t mind it either.
Most of mine are Northern and Southern,with a few(Rabbiteyes,which can get big).
I haven’t changed some containers in over five years and they’re doing fine.

Did you ever replace the medium or do you leave for 5 years in the same container.

The same container and medium.
I took a tour of Zaiger’s place and there are a lot of trees in 30 gallon plastic rain barrels,that were cut in half.They never take them out.

Sounds good, I’ll go for it.

Maybe a re-think is needed?