I have a bunch of pickling cukes coming in. Dad used to put his up in a crock with dill, vinegar, water and garlic. Anyone have a better recipe for ‘half dills’? Thanks! I really want the pickle to stay as green as possible.

I would be interested in a good recipe too. Also for hot dill spears.

Here is a Russian/Ukrainian recipe for freshly-salted cucumbers:

Thank you so much!

I made a batch of pickles based on a recipe from NPR and they were great!

While my youngest daughter who helped probably would have liked them better without the bit of heat from the red pepper, everyone else who tried them really liked it. They stayed a nice green color while on the counter (about 1.5 weeks, but lost it a few days after I put them in the fridge, but were still crisp. Make a lot and take a taste every couple of days and you can figure out exactly how much fermentation you like. I actually like them at all the different stages along the way, so it is a lot of fun and I’d probably just eat them all before they’d even get to the fridge if I wasn’t saving them to bring to a family reunion.

I actually cut up some other cukes and through them in the remaining liquid in the fridge and thought they were pretty good as “1/4 sour” pickles about a week later, although most would probably like them more pickled. The “recycled” pickles stayed green in the fridge, so I think it is mostly the amount of time they’re in the jar that turns them.

My mother used to make a big crock (different recipe, but a similar process), but I don’t have that recipe at hand. She used grape leaves on top of the pickles to keep them beneath the surface, but I didn’t have any and used horseradish leaves on top instead. Both seem to add something (tannin?) to the water that help keep them crisp. Good luck and let us know your results.

Made a trial batch from Stan’s recipe. I cut the recipe way back and only used a pound of my pickling cukes. Delish! This is a picture of the first day they were made. Four days later, they are gone! 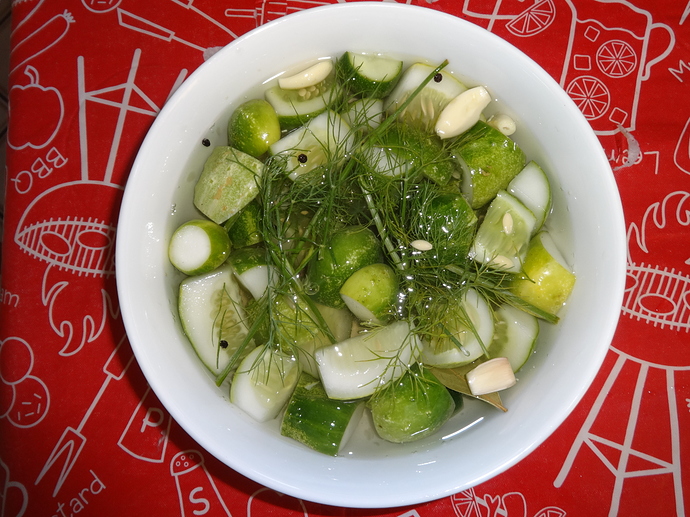 Stan the only thing I did not have were horseradish leaves. The currant leaves are on the bottom! What a taste!

Drew this recipe is really good. If you add red pepper flakes to the recipe it will give them the ‘heat’ you’re looking for. You know best about hot peppers!

I’m going to try it next week. I have my own home grown pepper flakes too.

Pickles made with gherkins/mouse melons. Cute little gherkins look like little watermelons. I used the dill recipe in the Ball Blue book. And a jar of peach & pineapple jam and a jar of peach, pineapple , & tomato salsa. I liked the salsa better before I cooked it but processed was still good. 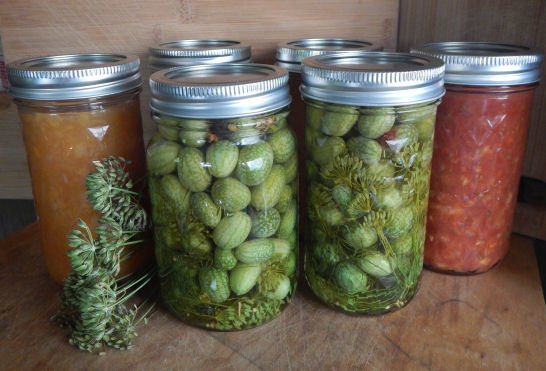 Your mouse pickles are great looking! I will try them next summer and cornichons! What fun. I too prefer fresh salsa than the processed taste. Pickles are terrific.

mrsg47, if you do grow the mouse melons give them something tall to climb. I have them in tomato cages and they are all over it, falling down and climbing again. I am going to make a tall frame and put some chicken wire on it for them next year. They surprised me when they grew so vigorously. They are so cute.

They will make great ‘pickled presents’! thanks so much. The name is certifiably ‘cute’.

Is this recipe just as good for green tomatoes? Thanks

You can use the same approach for green tomatoes with some minor differences.

Great Stan Thanks! I’ll be making them next week. Still love dill and garlic together.