Hello, I haven’t been here on the forum much, been busy with my job (and other life issues) at the tomato greenhouse, been there almost a year. Hard to believe. Due to a snowstorm today they let us go home early today. Judging by the road conditions, I doubt I’ll be going to work tomorrow.

Anyway, in fruit news, looks like U of Arkansas has released another primocane bearing blackberry variety, called Horizon. One drawback, if you consider it important, is that it’s a thorny variety. This is their second thorny primocane variety, PA-45 being the first.

Only vendor I know of that’s selling it now is Pense berry farms.
. 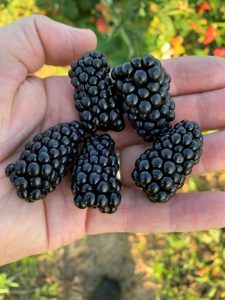 A new blackberry has been released by the University of Arkansas System Division of Agriculture (UA), named Prime-Ark Horizon.

I read about this one recently, looks like its more geared to fit the commercial market rather than home gardeners. I’m adding a ridiculous amount of varieties of blackberries this year, so I still might give these a try!

Those look great in my opinion.

@757Will and @clarkinks, yeah, looks interesting. Looks like it can produce some very large berries- over 10 grams for some floricane fruit, that’s huge. My Freedom produces some big ones like that. Do you still have your PA-45’s, Clark?

But, will I get it? I don’t think so, I have enough blackberry canes as is. And I don’t want to deal with thorns. I added one Caddo, Natchez and two Ponca plants last year, and already have Triple Crown, Freedom, Traveler, Osage and Ouachita from 2018. So, I think I’m good. Besides, haven’t even had much time or the inclination to tend to my plants and trees since I’ve been working.

Here’s a link to the Pense’ site selling them. Going at $6 a plant, min of 3 plants. Shipping is free for orders above $150, otherwise $30 for shipping under that price. 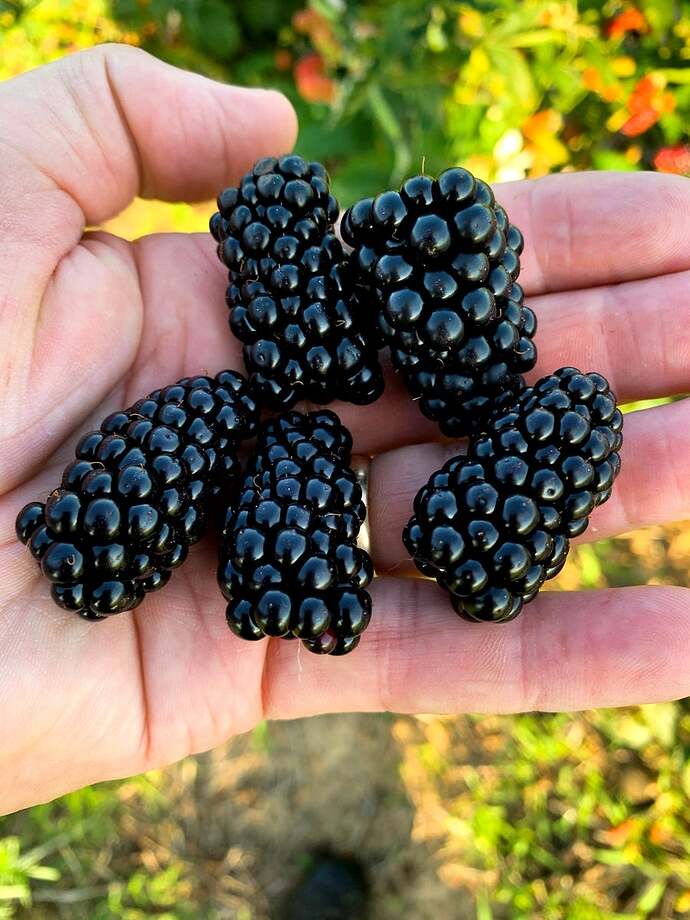 Prime-Ark® Horizon,   Is a new primocane-fruiting variety to expand grower options for this unique blackberry type. It has very high yield . Berries are large and firm, with postharvest similar to Prime-Ark® 45. In Arkansas, the floricane...

30 dollar shipping!? That’s outrageous for a few bare root plants, and almost double the cost of the plants! That being said yeah the Prime Ark Horizon berry size is very attractive, but the real question is does it have the flavor to go with it? I don’t think this one can hold a candle to prime ark freedom. I think it’ll be awhile before they have a primocane that tops that. I didn’t even realize they were still putting out thorny varieties, but I did see in the video they released they could be considered semi thorny. The thorns are much less frequent and not as monstrous as wild brambles.

Yeah $30 is steep if you only want a few plants, guess it’s geared for folks who want a lot of plants. Nourse and Indiana Berry have more reasonable shipping rates, but aren’t selling Horizon, but may be next year.

Well, semi thorny is good, I guess. We have wild blackberries here, and they have nasty thorns and tart berries, so, not worth the trouble in my opinion.

My Freedom canes can produce berries almost as big as my thumb, just huge. We got a really good primocane crop this year, produced well into October. Triple Crown are smaller but better tasting in past years, but were a bit more tart last year (2021).

Freedom has shown not be as hardy here, though, but we’re zone 6 in NE Kentucky.

I guess that’s true, I sourced a majority of my blackberries from Indiana and Nourse this year. Can’t wait to get them started. First time ordering from both nurseries. I have had wild blackberries a few times and maybe 1 out of 10 you’ll get a real nice one. I absolutely love blackberries which is why I’m sick of the junk in grocery stores that tastes like a box of lemons. Every now and again I’ll taste a good box at the store, but usually end up disappointed. Like you I’m going to have a lot of varieties, a lot in pots since my yard isn’t very big. So in the coming years I’ll be able to decide which are my favorites. Unlike with your climate, I don’t think I’m very limited with varieties. I have way more than enough chill and it’s not brutally cold. My problem is I’m still trying to devise a way to trellis my pots! Let me know if you have any suggestions.

I grow just about every variety that exists except for the thorned ones…which i used to grow. The thorned ones do have a little bit better taste but imho its not worth it. In my zone 6B i have tried Prime Ark Freedom for 3 years and it has been disappointing. I truly believe its a zone 7 and above to thrive. If it doesnt do what its supposed to this year im gonna treat it like a floricane.

If you have SWD pretty bad Black Satin is a good one to grow and use it as a trap plant. SWD loves Black Satin which i think is a dog… i put my SWD traps in that plant and for the most part they leave the others alone.

I am trialing Ponca and Caddo as well as Von. Von has been a very weak plant for me…maybe next year it will go…but im not sure.

Ponca and Caddo have vigor… and looks like they are going to not need much support. Hoping that they live up to the hype.

I’m zone 9a and my prime ark freedoms struggled this year in the heat of the summer. In fact all the canes died in late summer? The plants each pushed up one cane a piece in response so my freedom blackberries will be lacking this year. Good news is my poncas look great! On a side note Ponca seems to be very easy to propagate from stem cuttings. I did about 40 cuttings 3 weeks ago and it looks like I’ll have 100% success rate or very close to it.

When your blackberry rows get too wide from sucker growth, do you prune off those suckers at ground level or dig them out with a shovel?

Im curious to your reports on how they do without many chill hours or dormancy.

Ive tried just about every cutting technique for propagation but two.

1)air layering. cane berries are dicots so in theory with a good enough wound on a cane or lateral they should root via air layering.

The neatest propagation that ive done is having one plant in a wicking tub I got 10 plants out of tip rooting, then at the end of the season i pulled the whole root ball up and trimmed all of the pencil sized roots and did another 20 plants over the winter via root cuttings… i think i could easily get 50 plants a year with this method if i dial it in just right.

Are you misting your cuttings or have high moisture?

PA Freedom has a problem with canes dieback for me in 7b Georgia. They canes are typically still growing by the time freezes come when all other cultivars are hardening off.

It’s too bad because the berries are large, good taste, and early (before swd)

Sorry, can’t help you with pots, all our plants are in the ground.

What did you get from Indiana Berry and Nourse? I noticed that IB are sold out of Freedom and Natchez already.

I planted my Ponca, Caddo and Natchez late last year (June?), so they didn’t put up a lot of big canes. Hoping they’ll do better with this year’s canes. Going to try to fertilize all my plants this year, which I didn’t do last year. Lots of pruning and weeding needed too.

You can dig them out to make sure, but I just mow them down, and they don’t seem to come back.

Freedom is a suckering machine, I have seen suckers about 12ft from the crown. All the others aren’t as bad.

TC and Osage are my favorite taste wise, TC is the most hardiest of all my BB’s.

Prime Ark Freedom for 3 years and it has been disappointing. I truly believe its a zone 7 and above to thrive

I agree, I get quite a bit of winter kill on my PAF as well, our late freezes really zap them. For me, I get a few floricane berries from it, but have a better results from the primocanes.

Ouachita is the least vigorous variety I have, maybe not well suited for zone 6b.

All I did was scrape the bottom 1.5” of the cutting with a knife and dip in rooting hormone. I used regular old potting soil and stuck them in. I tried this over the summer and only had one cutting take. I have not misted them at all this go around. I’m just keeping the soil damp once a week or so.

So if I planted Osage and Triple Crown, I’d get like two months or so of berries? This is 7B Maryland. I don’t seem to have SWD yet. Do you get a lot of yellow jackets on the BBs?

I keep Chester as my ‘just in case’. Just in case there is a freak winter, or freak spring…Chester is there.

One of Chesters parents is Illini Hardy which makes it one of the most cold hardy varieties…down to Zone 5.

Triple Crown has a parent of Chester along with Darrow and Black Satin, Brazos etc… so it is a superior to Chester in size, production, vigor etc. …but not as cold hardy.

Plant Arapaho if you want an early berry that will get u thru til Triple Crown hits.