Eight long years late after starting my first batch of apples from seed using controlled cross pollination, I’m finally getting a lot of fruit to try. In this post I have some video footage of taste testing. I hope to pull off a post soon with...

9 years in to growing apples from seed, I finally am having significant amounts of fruit to test out. There are a few promising ones in there and more that I would like to use for further breeding work. A few red fleshed apples that may be in some ways improvements on the red fleshed apples I’m working with, but time will tell. One very promising looking black skinned apple with red flesh and intense flavor that may be a good cider apple. I made a couple videos walking through and testing. This spring I’ll start doing second generation crosses using some of these backcrossed or crossed to other seedlings.

Great videos. Thanks for posting and thanks for the work you’re doing. It’s awesome. 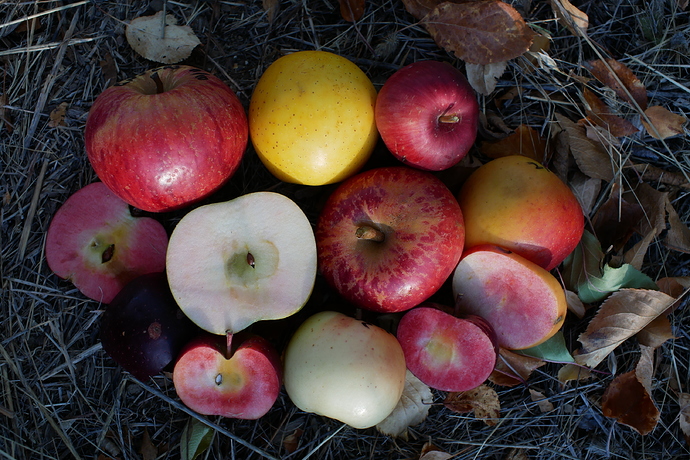 Some of the more interesting or promising seedlings.

Way cool - makes me wish I were a few years younger and had some acreage to play with. Go for it! 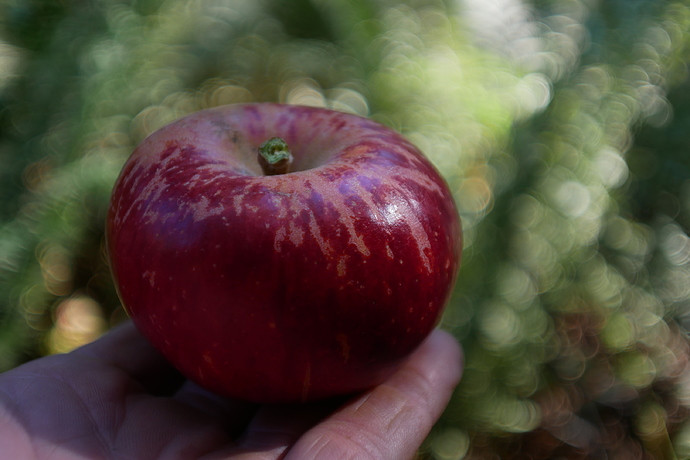 This one is particularly interesting. Parents Grenadine x GoldRush and not looking in the least like either of them. I’m about 80% sure I’ll be keeping it. Very firm texture, but not woody, just dense and fine grained. Flavor is not wow or sensational, but it’s very good and quite dense and rich. And, it’s really beautiful, with russet streaking and a flattened shape. Also hoping it’s a good keeper as the pollen parent is GoldRush, which is a next level keeper. Brix 23.5 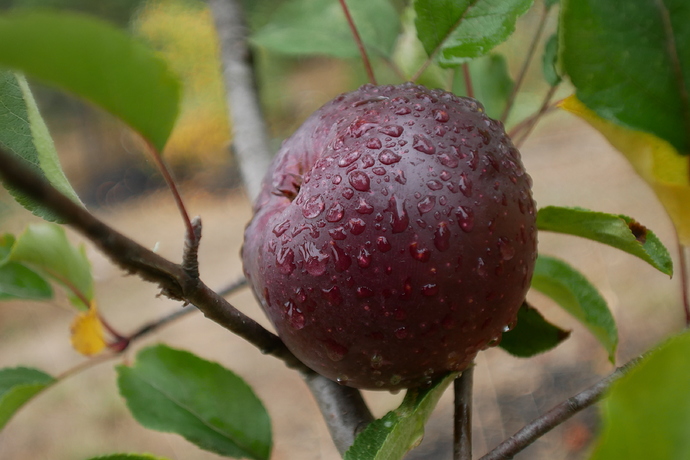 A very dark red “black” skinned apple with intensely flavored red flesh. The skin coilor is attention getting hanging on the tree, as dark if not darker than the darkest apples on the homestead. I think it is still ripening too, so the flesh and skin will probably darken more. It is very likely a cross with King David, Grenadine being the other parent, but as far as I know it’s open pollinated. This was irrigated some and is still Brix 20 The flavor has strong berry components complex, possibly more strawberry than the fruit punch flavor of grenadine. I will not be surprised if this matures into a better overall fruit than it’s parent, but again, we’ll have to see. It is not an ideal desert apple as the texture isn’t awesome. It is also similar in tannin to grenadine, not too high to eat, but might be offputting to some. Very promising, for juiice and cider, possibly some cooking. A couple more years of fruiting should reveal much. Scab resistance is pretty low. Flesh color is shown in the picture of group of seedling apples, far left red cross section.

I may add some more pictures and notes to this thread later if I have time and get the pics taken.

Very interesting, thank you for posting these reports!

As for tannins, there is a suggestion of tannins in the Redlove series. The developer mentions it in his second generation. I forget the words he uses, but states the next generation may be more accepted to everyone, calling them Redlove Jederman. So maybe the red flesh trait is somewhat, but not completely, connected to the astringency? Regardless, your apples are beautiful and I bet they will be very rewarding to grow.

I don’t thin, the tannin is too much connected. I already have a very low tannin red flesh from these crosses, at least one. Many are within acceptable dessert range, and will be especially if grown under irrigated conditions. Many old school desert apples are actually significantly tannic and it’s an important component I think in some of them. I think the grenadine crosses are more likely to have it than the rubaiyat,but we’ll see. the one small Wickson x Rubaiyat red flesh is not tannic. I haven’t tried any of the red love yet. I talked to Markus early when I started this and he was helpful with apple breeding info. Great guy.

Super cool! Thanks for sharing. And I’ve enjoyed your YouTube grafting series.

I found it interesting that some of the combos seemed to trend towards certain characteristics being displayed. Gren. X Golden Russet seemed to want to throw smooth, waxy, yellow apples. Gren. X LW seemed to want to throw red apples with woody flesh. While it might not be “popular” content, I thoroughly enjoy these videos and am always looking forward to the next one.

Always love your work and videos and please keep it up!

Very cool! I was inspired by your work and your apple breeding videos, and made my first crosses last spring — Yellow Transparent x Pink Lady (because they were what I had available). Can’t wait to get working on apple breeding!

Skillcult— Thanks for the update. Cool stuff you’re working on. I wish my climate mirrored yours. Unfortunately, the Midwest gets a lot more rainfall and the summers are pretty humid. So for us Etter’s apples don’t really work that well. Hopefully some of your crosses will work better for us. It’s not all bad though since the PRI co-op apples were tested here and perform well in the Midwest. I would guess your Goldrush crosses would have a good chance of working here.

Nice, I should have some pollen available this year. At least last year’s pollen if nothing else. I’d sure like to see Pink Lady used more, for general quality and late keeping and late hanging. I’ve eaten it here in prime condition tree ripened on New Years, so it’s a VERY good hanging apple. I don’t know when it’s picked commercially, but it also ripens off the tree well oibviously. I have a few crosses with it. Only one has fruited and it is poor, but I’m hopeful. Lady Williams which I’ve used a lot is one of Pink Lady’s parents and where it gets that long keeping/hanging and some of the flavor and style too. Most of those promises seem unpromising, but I know of other apparently very good LW crosses.

Only time will tell. I know certain conditions are required to get good red flesh development, but I’m not sure what all are or how it works. The ticket though I think is just more citizen breeding and seed planting. Just planting red flesh OP seed and seeing what survives the gauntlet in any climate. I may continue to work on ways of mass pollinating small trees, like with complete tent coverings, and just walk in there and pollinate everyday with pollen medleys of very good varieties, then get that seed out to people to grow, cull and select. Eventually many more excellent varieties will happen and better than the etter apples, which isn’t saying much really. They are basically breeding stock, except for Pink Parfait and Pink pearl maybe, which are not the reddest or possessed of the other characteristic that make me want to grow RF apples, which is unique flavor.

Yes, there do seem to be some trends. Some are obvious and others could still be chance given the small numbers I’m working with, statistically it’s hard to be really too sure of much. But, while there are some real outliers that don’t show much of either parent, most do show some obvious signs of one or both. This content is unpopular. I lose subscribers from my blog and youtube when I publish it. People who like it are very enthusiastic and think it’s important though and I consider it valuable and important. The truth is I can’t afford to do it, or this project, but I just do it anyway. I think I could produce some important results and information about various orchard topics and do a lot of good, but not without funding and an orchard manager. I can come up with the projects, but I can’t fund them and make them all happen. I’d like to disseminate more seed, pollen and scion wood and possibly some grafted trees. Maybe this will be the year I try to make that happen.

I note the October issue of Fruit Grower has a Michigan State University crab apple bred for deep red juice. Impressive …like drops of red wine almost according to the short article.
Otterson may be a parent, but they didn’t tip their hand on the parents of their latest efforts. .

I am sorry that the apple breeding posts have resulted in a loss of viewers. I know your trying to produce income from your youtube videos and that has to be disheartening. Unfortunately, apple breeding isn’t a widely shared interest and unlikely to attract many viewers. As you pointed out, the people with an interest in it are passionate about it but their numbers are few. I also think people are far more urbanized than they were 50 years ago and that has translated into less interest in agriculture and outdoor activities. It certainly has meant people have less space to garden and grow fruit trees.

You might consider doing things a bit differently and see if that helps. Maybe split your site into two parts, one part of it being topics that attract larger numbers of viewers and a bit more commercial while the other part of it consisting things that you want to pursue but don’t yield good youtube “metrics”.

I also think there is an unmet need for translating methods from the countryside to a city environment. Books on how to garden in the city seem popular. Have you thought of doing a video series on how to grow apples in small spaces? Things like cordons, spindle bushes and growing apples in containers might find wider interest. I find little content like that on youtube and most of it originates from the United Kingdom. It might give you a bigger audience. I think many people would like to grow fruit trees in urban settings but don’t know that it is possible or if they do have no idea how to accomplish it.

I know your reluctant to focus on the number of viewers and subscribers. You don’t want to end being just another youtube channel. But looking at viewer numbers for a lot of different videos I suspect you could do better with videos of your chickens rather than ones dealing with woodcraft or fruit tree grafting. Have you thought about expanding your videos into areas that have higher viewership levels? Videos about animals seem to do well. I realize you don’t want to specialize in “funny animal videos” or “ this one simple trick will………” videos but maybe a wider range of content could help.